As a reminder, these rankings reflect how much value each team brings fantasy players, not how good these teams are in real life. 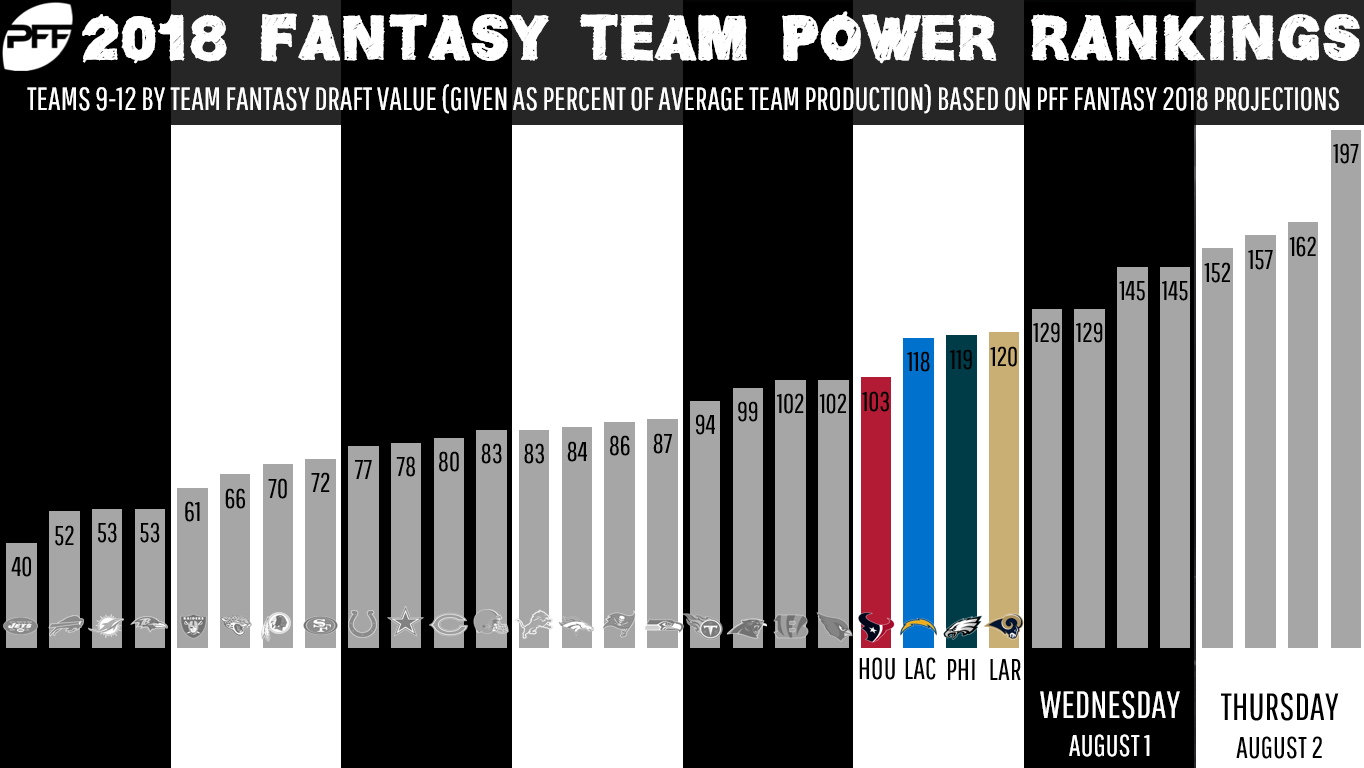 Led by the electric combination of Deshaun Watson and DeAndre Hopkins, the Houston Texans check in at No. 12 on the 2018 fantasy football team power rankings.

The Texans offer fantasy players 3 percent more value than an average NFL team. They have five fantasy-relevant players you need to know about for your 2018 draft:

The Texans have the No. 28 backfield from a fantasy perspective.

Miller is one of the most interesting players in fantasy. He is Houston’s “every-down” running back, but there are some red flags in that area. As Scott Barrett pointed out, Miller “was out-snapped by Alfred Blue 93 to 63 over the team’s final three games.” Miller also has some advanced metrics working against him, including his terrible elusive rating last season.

All of this is to say that Miller is an unexciting option in 2018, despite the fact he finished as the No. 14 overall running back in 2017. Miller is a tail-end RB2 with the potential to be a high-end RB2 given Houston’s high-upside offense.

Foreman may not be ready for the start of the season, but if he is a go for the full (or most of the full) season, he’s worth a fantasy bench spot as Houston’s change of pace back. Foreman would not be an every-week starter in fantasy, but he projects to be a viable bye week replacement option.

The Texans have the No. 4 wide receiver corps from a fantasy perspective.

It’s hard to believe, but a year ago, Hopkins was being drafted at the end of the third round, on equal footing with Terrelle Pryor. Leading into 2018, Hopkins is a no-brainer top-five fantasy wideout. Hopkins led the league in targets (164) and touchdowns (13). He also ranked fourth in yards (1,378) despite playing fewer than half of his games with Watson under center. 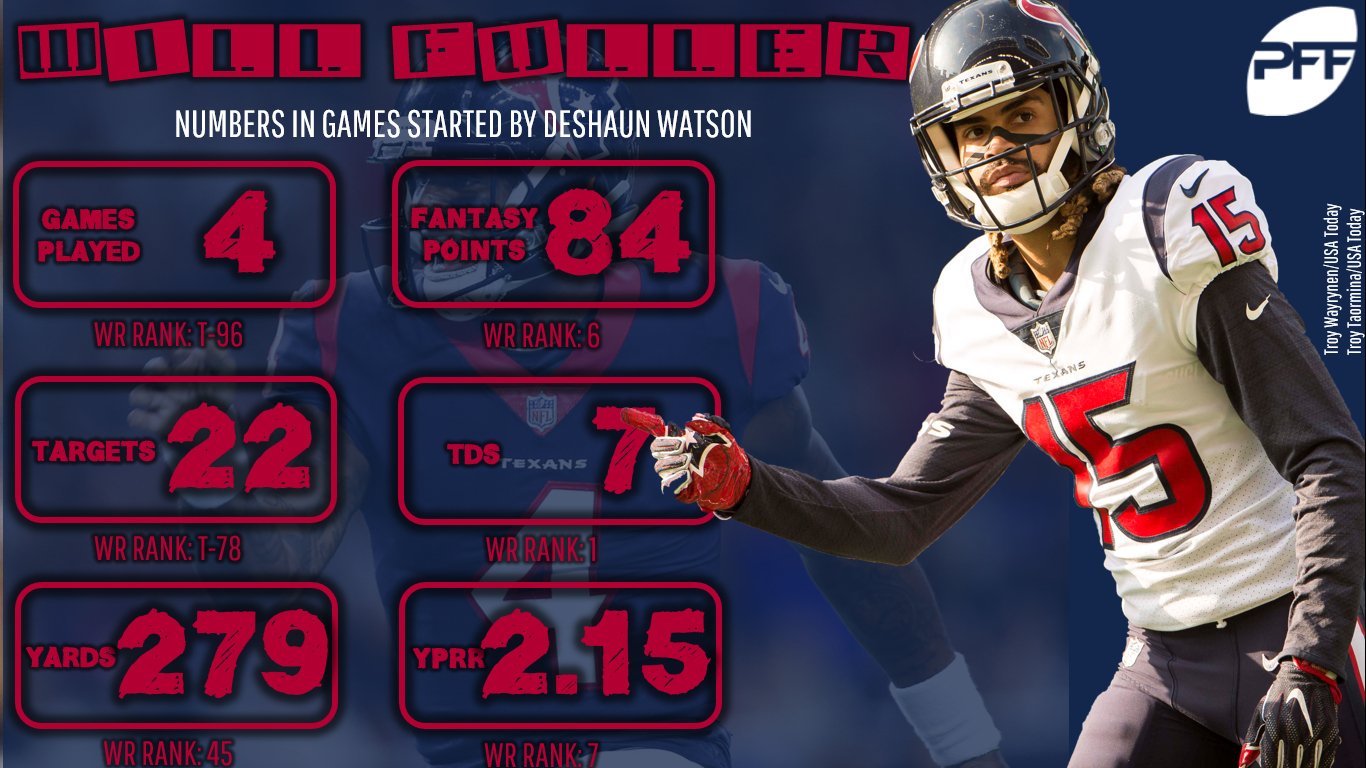 Fuller is much more difficult to figure out. He played only 10 games last year, but he caught seven touchdowns. Actually, all seven of those touchdowns came in just four games (the four games in which Fuller and Watson both started). He scored those seven touchdowns on just 13 receptions. These are all laughably unsustainable rates, but it’s also naive to think that those touchdown explosions are meaningless; they show that the Watson-to-Fuller combination has a high ceiling. Fuller is a tail-end flex option that will be a boom-or-bust player on your fantasy team.

The Texans have no fantasy-relevant tight ends you need to know for the 2018 draft.

The Texans have the No. 7 group of quarterbacks from a fantasy perspective.

In the six games he started last year, Watsons threw for 1,597 yards and 18 touchdowns against seven interceptions. He added 253 rushing yards and two scores on the ground. In those six games, Watson scored 166 fantasy points, which was 29 more points than the next-closest QB in that span (Tom Brady). His 16-game pace was historic.

Watson’s sample size is tiny, but it’s big enough to know that he has a No. 1 overall ceiling. Watson is locked in as a fantasy QB1, but it’s a fool’s errand to think he’ll keep last year’s pace over the course of a full season.

Despite losing one of their most valuable fantasy assets in Hunter Henry, the Chargers are still one of the better teams from a fantasy perspective in 2018. The Chargers check in at No. 11 on the 2018 fantasy football team power rankings.

The Chargers offer fantasy players 18 percent more value than an average NFL team. They have four fantasy-relevant players you need to know about for your 2018 draft:

The Chargers have the No. 7 backfield from a fantasy perspective.

Notably, Gordon’s work in the passing game has increased. He saw 34 targets as a rookie and 53 as a sophomore. Last year, he saw 73 targets. Gordon is a good bet to finish in the top 10 among fantasy running backs for the third straight year.

Despite Gordon’s increased usage in the passing game, there’s still work for Ekeler to be a fantasy asset thanks to the work he’s expected to see in the passing game and as a change of pace option. Ekeler was one of the best running backs in the league in terms of fantasy points per touch last year. Ekeler was the No. 43 fantasy running back last year, which makes him a potential flex option once the bye weeks roll around. His ceiling isn’t high (Gordon’s health permitting), but he figures to be a weekly contributor.

The Chargers have the No. 11 wide receiver corps from a fantasy perspective.

Last season, Allen reminded everyone that he is, in fact, good at football. Allen’s 102 receptions were fourth in the NFL, and his 1,393 yards ranked third. He displayed his explosive ceiling (12-159-2 and 11-172-1 in back-to-back games last year) and his general consistency: He had at least five receptions in 12 of 16 games last year. Allen finished the season with five 100-plus yard games over the final seven weeks of the season, and he enters 2018 locked in as a fantasy WR1, especially with Henry’s injury opening up the door for even more opportunity.

Not to re-open the Henry wound, but there are no fantasy-relevant tight ends on the Chargers for 2018 drafts.

The Chargers have the No. 11 group of quarterbacks from a fantasy perspective.

“If you still prefer to wait on quarterback, there might not be a better target than Rivers. Five consecutive seasons as a top-12 quarterback is really impressive and he’s priced a little below his floor,” wrote Curtis Patrick earlier this summer. Patrick provided that analysis after examining how hard it is to repeat as a top-12 fantasy QB.

The defending Super Bowl champion Eagles are a top-10 team from a fantasy perspective as well. Philadelphia checks in at No. 10 on the 2018 fantasy football team power rankings.

The Eagles offer fantasy players 19 percent more value than an average NFL team. They have six fantasy-relevant players you need to know about for your 2018 draft:

The Eagles have the No. 26 backfield from a fantasy perspective.

Ajayi joined the Eagles in the middle of the 2017 season, and his workload increased on a near-weekly basis:

Jay Ajayi's touches after joining the Eagles last year. The Super Bowl is the obvious outlier, but he essentially saw an increased workload every week. pic.twitter.com/cbbgLvYbkE

The fantasy community at large hasn’t fully bought into Ajayi as the lead back in Philadelphia, especially because Corey Clement got some goal-line work in the postseason, but Ajayi is lined up to be “the guy” in 2018 based on what the team has said about him in the offseason and the way the Eagles increased his workload down the stretch in 2017. He should be viewed as a mid-pack RB2.

Sproles returns from injury and should be the team’s primary third-down back in 2018. He has some appeal as a bye week flex fill-in, but nothing more than that.

The Eagles have the No. 18 wide receiver corps from a fantasy perspective.

During the regular season, Jeffery was a fantasy disappointment in 2017. He played all 16 games and caught 57 passes for 789 yards and nine scores. He finished as the overall No. 22 wideout — certainly not awful — but it’s not the top-10 performance we know he’s capable of. But this Eagles offense spreads the ball around, and Jeffery didn’t have any massive games as a result (he had just two games with over 80 receiving yards, and none with over 100. Look for Jeffery to finish around WR20 again in 2018.

Agholor took a big step forward in 2017, as he caught 62 passes for 768 yards and eight scores. He finished with just two fewer fantasy points than Jeffery as the No. 23 overall wideout in PPR leagues last year. Agholor’s ceiling suffers from the same spread-the-ball-around mentality that Jeffery is impacted by, but this might actually be a good thing for Agholor, as it assures that he will see the requisite volume to be a fantasy producer. He can be viewed as a tail-end flex option with potential upside to be a WR2.

The Eagles have the No. 3 group of tight ends from a fantasy perspective.

Ertz built on his 2016 success and had another big year in 2017 en route to the No. 3 overall tight end finish with 73 receptions, 824 yards, and eight scores. With Ertz, who is entering his prime at age 27 and playing in an offense that will look largely the same as it did last year, there is no reason to think he won’t repeat as a top-three tight end again in 2018.

The Eagles have the No. 5 group of quarterbacks from a fantasy perspective.

Wentz played only 13 games last season, but he still ranked second among quarterbacks with 33 touchdowns. Wentz is due for some touchdown regression this year, though, as his 7.5 percent touchdown rate was 77 percent higher than league average. Even with touchdown regression, we expect big things for Wentz again in 2018. The PFF Fantasy crew has Wentz ranked as the No. 5 quarterback (consensus).

The Rams — last year’s No. 32 team on the power rankings — transformed overnight. The Rams rank No. 9 on the 2018 fantasy football team power rankings.

The Rams offer fantasy players 20 percent more value than an average NFL team. They have four fantasy-relevant players you need to know about for your 2018 draft:

The Rams have the No. 3 backfield from a fantasy perspective.

Gurley was largely written off leading into the 2017 season, but he hit his ceiling in 2017 thanks in large part to his increased usage in the passing game. Gurley’s 64 receptions last year were as many as he had in 2015 and 2016 combined.

Not only did Gurley see elite usage (343 total touches), but he also ranked in the top 10 among fantasy points per touch (0.94). There are no lingering doubts about Gurley’s ability in 2018; all of that was erased once Jeff Fisher was replaced by Sean McVay. Gurley is our consensus No. 2 running back.

The Rams have the No. 17 wide receiver corps from a fantasy perspective.

Cooks, Los Angeles’ new wideout acquired in a trade with the Patriots, was one of the best deep-ball wideouts in the league last year. He racked up 608 yards on deep targets (20-plus yards downfield), second-best in the NFL, and his 16 deep receptions were first in the league. Tom Brady also had a passer rating of 106.9 when targeting Cooks last year, the eighth-best QB/WR duo in the league. Jared Goff isn’t Brady, but he did have the fifth-best passer rating in the league last year (100.5). The Rams locked Cooks up to a long-term contract, which bodes well for his usage in an offense that has many mouths to feed.

Woods had a breakout year last season, posting a line of 56-781-5 in just 12 games. He was on pace for 75-1,041-7, which would have been good enough to make Woods a top-20 fantasy wideout last year. (That pace is also eerily similar to Cooks’ line of 65-1,082-7 from last year.) His role may take a slight hit with the addition of Cooks, but Woods is still a solid WR3/flex option with tail-end WR2 upside.

Kupp remains the team’s slot option, and he was actually the team’s leading receiver last year, gaining 869 yards on 62 receptions. Goff had a passer rating of 113.6 when targeting Kupp, which was the fifth-best QB/WR combination in the league last year. His 2.04 yards per route run out of the slot was fourth-best in the league, trailing JuJu Smith-Schuster, Keenan Allen, and Adam Thielen — and just ahead of Larry Fitzgerald. That’s fantastic company. Kupp’s role is secure, but the big plays will be made by Gurley, Cooks, and Woods. He’s a high-floor but low-ceiling option and should be a WR3/flex option on a consistent basis.

There are no fantasy-relevant tight ends on the Rams that you need to know about for 2018 drafts.

Jared Goff doesn’t need to be drafted in your 2018 fantasy drafts.