There were high fantasy hopes when the Houston Texans signed running back Lamar Miller after the 2015 season. He had finished as the No. 9 and No. 6 fantasy running back in 2014 and 2015, respectively, despite the Miami Dolphins not even giving him 13 carries per game (12.8).

Some of that was because Miller was one of only six fantasy-relevant running backs (Miller, Frank Gore, Darren McFadden, Jeremy Hill, Shane Vereen, Alfred Morris) to play all 16 games both years, but he also averaged 4.81 yards per carry, caught 43 passes a season, and scored 19 total touchdowns. He had PFF grades of 84.8 and 84.9 those two years. He wasn’t the best running back in the league, but the list of better ones wasn’t long.

Things in Houston haven’t panned out, though. Over two seasons, Miller’s workload has increased by more than four carries a game (up to 16.9), but everything else has gone the other direction. His yards per carry as a Texan is only 3.88, he’s caught 34 passes a year, and he’s only hit the end zone 12 times. That PFF grade has fallen to 70.0 (in 2016) and 77.9 last year.

Part of the reason for that: Miller just can’t avoid a tackle. As a Dolphin in 2014 and 2015, he forced 60 missed tackles on 410 total carries, about a 14.6 percent clip. That wasn’t great — per PFF’s elusive rating, which measures forced missed tackle effectiveness on carries and receptions, he ranked 26th of 42 running backs in 2014 and 32nd of 52 in 2015 — but it was light years ahead of what he’s done as a Texan.

With Houston, Miller has forced 44 missed tackles on 506 carries. That’s 8.7 percent. That’s … bad. Per elusive rating, he’s ranked 49th of 53 and 47th of 53 in his two seasons. That doesn’t explain all of Miller’s fantasy struggles as a Texan, but it certainly starts the conversation, as his yards after contact per carry have gone from 2.49 in 2014-15 to 2.21 in 2015-16; had he maintained his same after-contact numbers from Miami on his number of Houston carries, Miller would have had north of 150 more rushing yards as a Texan.

Despite that, Miller has the eighth-most carries over the last two seasons despite being a ratio-level disappointment. So then why have the Texans given Miller so much run?

The simple answer is that, well, he’s the best of a bad lot. If you really want a soda, and the store only has a bunch of Big K options and one RC, well, then it’s RC for you. You can't have a Coke if a Coke isn't available.

The Texans gave running backs 392 carries in 2017, 10th-most in the league. Despite that, Texans running backs forced 33 missed tackles on those carries, better only than the Buccaneers, who forced one fewer missed tackle on 61 fewer carries. That was an 8.4 percent rate for Houston. The flip side is the Chiefs, who (mostly due to Kareem Hunt) forced 67 missed tackles on 314 carries, 21.3 percent.

Check the chart below, scaling teams' RB carries against forced missed tackles. Up and left is efficient. Down and left is not. The Texans are … well, you can see their logo, representing their dot. 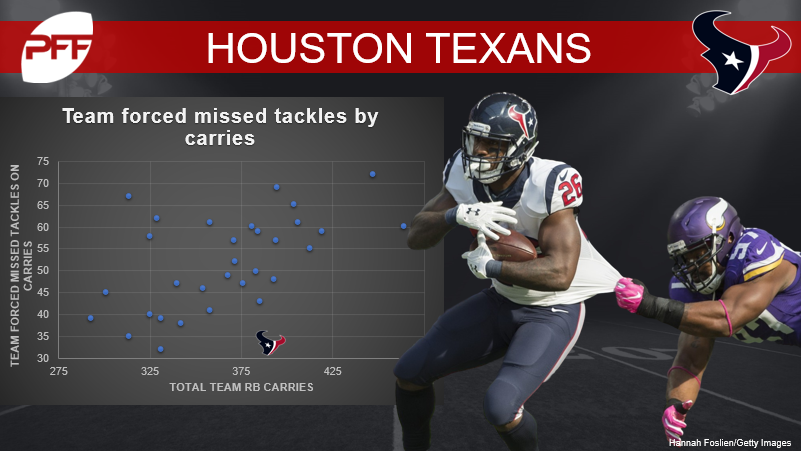 What does it mean for 2018? Well, not good things for Miller. The veteran almost certainly won’t get 250-plus carries for the Texans again. He was already losing work to rookie D’Onta Foreman in 2017 (who was at least slightly better at forcing missed tackles) before the rookie tore his Achilles.

If there are no changes to the Houston offense heading into 2018 drafts, Miller should go off the board as a mid-tier RB2, sort of a next-generation Frank Gore — quantity way before quality. But pay attention to reports on Foreman’s recovery, and don’t be surprised if the Texans dip their toes in the running back free agency waters or invest in a mid-round draft pick. Miller’s days as a premium fantasy running back were short-lived, if they ever existed, and now they’re gone.