It’s that time of year! It’s mid-July, which means training camp is nearly here and preseason games will be here before you know it.

It also means it’s time for the 2018 fantasy football power rankings, an annual pre-preseason tradition of ours at PFF Fantasy.

In case you are new (welcome!), here’s how the power ranking series works: We take the overall projected fantasy value of all 32 NFL teams and present them to you in batches of four — starting with teams 32-29 and working our way down to the top fantasy teams in the league. This is not a ranking of how good each team is on the real field.

On with the show! 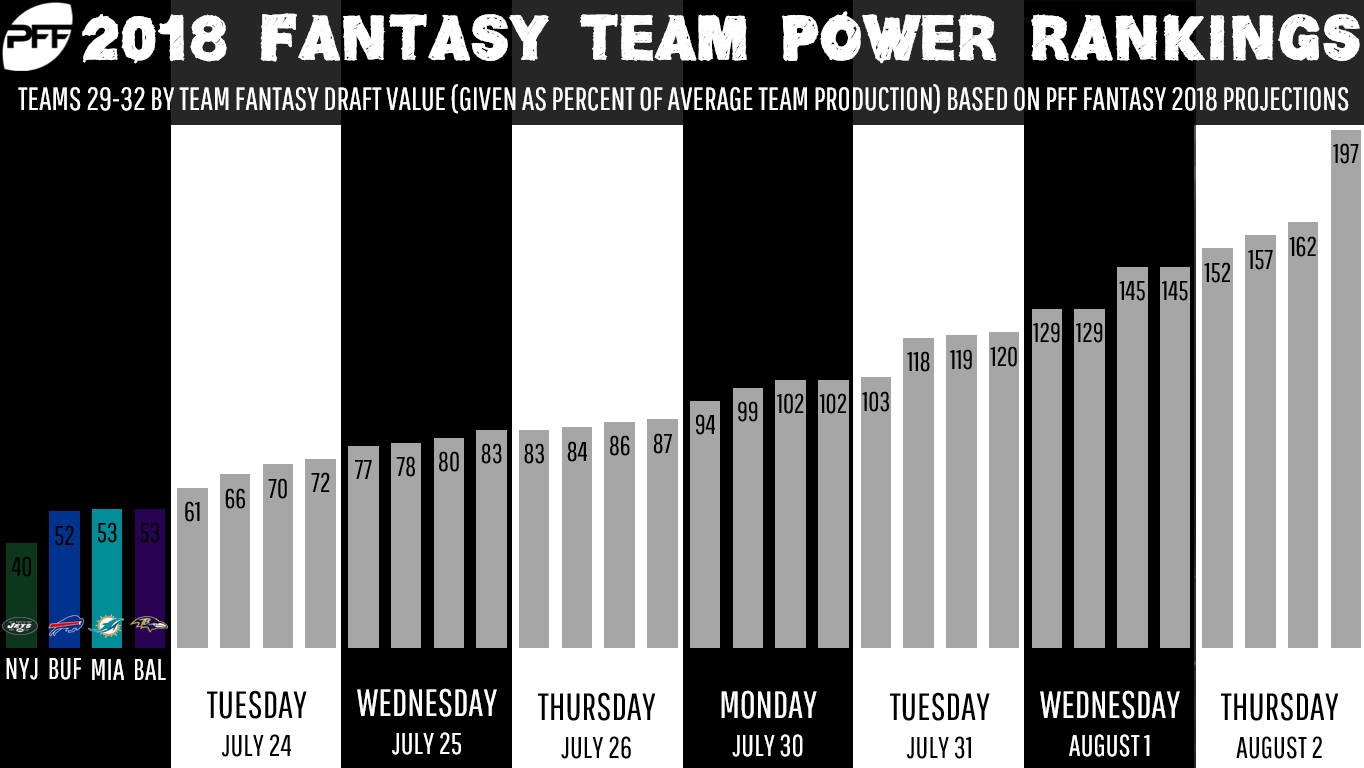 Last year’s No. 30 team got worse from a fantasy perspective.

The Jets enter 2018 by offering fantasy players only 40 percent as much value as the average NFL team. They offer fantasy players three vaguely relevant options and one intriguing player, including:

The Jets have the No. 27 backfield from a fantasy perspective.

The Jets have Crowell and Powell in the backfield. We have both players ranked outside of the top 30 among running backs, which means neither can be viewed as a weekly starter for your squad.

It’s possible that one of either Crowell or Powell could end up being a regular contributor for your team, but it would likely take an injury to the other or extreme inefficiency on Crowell’s part in order for this to be the case. These two running backs are draftable, but they are flex fill-ins — at best.

The Jets have the No. 28 wide receiver corps from a fantasy perspective.

Anderson is the Jets player with the highest ceiling in 2018. He actually finished as the No. 17 wideout in PPR leagues last year after posting a 63-941-7 line on 111 targets. Anderson has 100-plus yard and multi-touchdown upside, which is obviously worthwhile, but his season-long outlook isn’t quite as rosy in 2018.

An uncertain quarterback situation and a boom-or-bust profile makes it difficult to paint Anderson as a WR2 again for 2018. We currently have him projected to put up tail-end WR3 numbers. That’s fine — and Anderson’s potential for big weeks makes him a fun player to draft — but he’s not a true fantasy WR1, or even WR2.

Pryor could be worth a shot late in your fantasy drafts given his athletic ability and the available opportunity in New York.

The Jets have no fantasy-relevant quarterbacks or tight ends that you need to know about for your 2018 fantasy draft.

We had high expectations for Buffalo from a fantasy perspective leading into last year, as they ranked in the top 10 on the 2017 fantasy power rankings. It was a far fall down to No. 31.

The Bills offer fantasy players 52 percent as much value as an average NFL team. They have three fantasy-relevant players you need to know about for your 2018 draft:

The Bills have the No. 19 backfield from a fantasy perspective.

Assuming he actually does play (there’s some pretty serious offseason concerns right now, all of which make talking about fantasy football seem irrelevant), McCoy is the only Bills running back worth drafting in 2018. But at 30 years old in an offense that is in clear rebuilding mode, there are more negatives surrounding McCoy than positives.

We have McCoy slotted to perform as a high-end RB2 in PPR leagues this year, which is obviously still great for fantasy. He’s no longer an elite RB1, but as the projected workhorse in Buffalo, he could flirt with 300 total touches. McCoy was the RB7 last year after racking up over 1,500 total yards and eight touchdowns.

The Bills have the No. 31 wide receiver corps from a fantasy perspective.

In six games for the Bills last year, Benjamin caught 16 of 27 targets for 217 yards (36 yards per game) and a score. He was on pace for about 117 PPR fantasy points, which would have ranked outside of the top 50 among receivers last year. Despite the fact he has no serious competition for targets, we don’t expect Benjamin to fare much better in 2018, as we have him projected to finish outside the top 40 wideouts. He’ll be a benchwarmer for your fantasy squad, albeit one with upside in the red zone.

The Bills have the No. 12 tight ends corps from a fantasy perspective.

The Bills have no fantasy-relevant quarterbacks that you need to know about for your 2018 fantasy draft.

The Dolphins rank No. 30 on the 2018 fantasy football power rankings, which means the AFC East takes up the final three spots on the power rankings. I wonder who will win the division?

The Dolphins offer fantasy players 53 percent as much value as an average NFL team. They have five fantasy-relevant players you need to know about for your 2018 draft:

The Dolphins have the No. 24 backfield from a fantasy perspective.

Drake will end up being one of the most important players taken in 2018 fantasy drafts. After seeing an increased role beginning in Week 13 of last year, Drake was the No. 8 overall running back in PPR leagues for the rest of the season. His 91 rushing attempts (18.2 per game) ranked sixth in the league over that span, and his 24 targets ranked eighth.

If that’s how Drake is going to be used for the entire season in 2018, then he’s going to be an absolute steal. But that’s unlikely to be the case. The Dolphins brought in 93-year-old Gore and have been singing his praise thus far in the offseason. Drake should be the lead back, but 20-plus touches week in and week out is unlikely.

With that said, it’s far more likely that Drake is actually good than it is for Drake to fully split work with Gore. Drake isn’t too expensive right now (middle of the fourth round) but he has tail-end RB1 upside.

Speaking of Gore, we currently have him projected for about 110-115 rushing attempts, or about seven per game. He’ll be a flex fill-in who won’t give you a 0, but won’t really help you win any games, either.

The Dolphins have the No. 25 wide receiver corps from a fantasy perspective.

Despite having three fantasy-relevant wideouts in Parker, Stills, and Wilson (sort of), all of them should be viewed as risk/reward type players.

Let’s start with Parker. A prototypical real-life WR1, Parker has never really put together a true WR1 season — either in real life or in fantasy. Parker was the No. 50 overall wideout last year while playing in 13 games. He was the No. 50 wideout in 2016. In 2015, as a rookie, he was the No. 77 wideout.

We’re optimistic about Parker in 2018 and have him projected to finish as the No. 30 wideout, making him a viable WR3 or flex option on most weeks.

Over the last two seasons, Stills has actually been a better fantasy option than Parker, finishing as the No. 45 player in 2016 and the No. 27 wideout last year. Stills out-targeted Parker 101-to-95 last year (although he played three more games), he scored six touchdowns compared to Parker’s one, and he gained nearly 200 more yards.

The thing about Stills is that what we saw last year was much closer to his ceiling. He has spent five years in the league and has never topped 950 receiving yards. He has proved himself to be a capable end zone threat with 15 touchdowns over the past two seasons, but projecting Stills as anything more than a flex option is foolhardy.

The aforementioned Wilson is really just a flier at the end of drafts, but he seems to be one that people are underestimating. He apparently impressed during OTAs this spring, and he seems primed to take on at least some of the slot void left by Jarvis Landry. Wilson ran over half (58.3 percent) of his routes from the slot last season. Landry was only slightly higher, at 64.8 percent. People might be overlooking how Wilson fits into the missing puzzle piece.

The Dolphins have no fantasy-relevant quarterbacks or tight ends that you need to know about for your 2018 fantasy draft.

The Ravens were the No. 31 team on last year’s power ranking series, so, technically, they’re moving up in the world. This year, Baltimore checks in at No. 29.

The Ravens offer fantasy players 53 percent as much value as an average NFL team. They have five fantasy-relevant players you need to know about for your 2018 draft:

The Ravens have the No. 20 backfield from a fantasy perspective.

Collins is one of those guys who feels like JAG (Just A Guy), and it feels a little icky taking him with a late third- or early fourth-round pick. But he was the No. 13 overall running back last year after taking over (from Week 5 on). On the season as a whole, he gained 973 yards on 212 carries (4.6 YPC), and he’s primed to fill a similar role for the Ravens in 2018.

One of the most concerning things about Collins is that he doesn’t really catch passes. He had just 23 receptions last year for 187 yards and no scores. There’s no real value added in PPR leagues. Additionally, five of Collins’ six touchdowns came in a four-week span last year (Weeks 11-14).

Dixon and Allen are also worth knowing from Baltimore’s backfield. Allen and Dixon will likely compete in training camp to be the team’s primary third-down back behind Collins, although it’s possible both players will fill that role.

Allen had nearly 200 total touches last year and gained 841 total yards and scored six touchdowns. It was enough to — surprisingly — make him the RB23 in PPR leagues. But with Dixon and Allen potentially splitting that work, it could make both players difficult to trust on a week-in and week-out basis. Both players are worth a roster spot, because if one of them wins this role outright, it could make them a viable flex option.

The Ravens have the No. 26 wide receiver corps from a fantasy perspective.

The Ravens have a new-look receiving corps led by Crabtree, who showed serious signs of decline last year while posting a 58-618-8 line for the Raiders. It was the fewest yards he gained in a healthy season in his career.

A lot of that could be attributed to the serious attrition Derek Carr’s play experienced last season, but it’s not like Joe Flacco is any better. Carr’s 6.8 yards per attempt last year were actually not that far off from his strong 2016 campaign (7.0 YPA). Flacco’s YPA has been spiraling the drain since 2014: 7.2, 6.8, 6.4, 5.7.

Crabtree is still a major thread in the red zone, and that fact, coupled with his presence as the clear-cut No. 1 option on the Ravens, makes him a viable flex option with tail-end WR2 upside.

Brown was a player who seemed poised to become a fantasy star, but injuries held him back in Arizona, and he was never able to capitalize on a huge 2015 season in which he posted a 65-1,003-7 line. He fits the mold as a deep threat to replace Mike Wallace (who left Baltimore in free agency), but Baltimore’s complete lack of a passing game makes Brown a lot less enticing. Flacco has only topped 4,000 yards once in his 10-year career and he averages just 20 passing touchdowns per year. At the very least, it appears as if Brown will have the opportunity to reignite his career, which we should all be rooting for.

The Ravens have no fantasy-relevant quarterbacks or tight ends that you need to know about for your 2018 fantasy draft.