Fantasy football rankings: Take away injuries and see what happens

ARLINGTON, TX - NOVEMBER 24: Jordan Reed #86 of the Washington Redskins catches a touchdown pass during the fourth quarter against the Dallas Cowboys at AT&amp;T Stadium on November 24, 2016 in Arlington, Texas. (Photo by Tom Pennington/Getty Images)

With my first wish, I’d ask the genie for enough money that my family is set for life and we can do what we want. My second wish would be something political and I probably shouldn’t get into specifics here.

My third wish, though? Let’s talk about health for all the fantasy football players. I’d love to see what a 16-games-every-season Rob Gronkowski would do. I want to see how Deshaun Watson’s electric rookie season would have finished. Odell Beckham Jr. plays the whole season, Dalvin Cook gets an actual debut year, and for good measure, we get to see J.J. Watt wreak havoc all the time.

(Okay, so maybe I wouldn’t actually waste a genie wish on fun fantasy football material, but I needed an intro.)

The closest analogue we have to that is extrapolation. Watson played seven games last year and averaged 25 fantasy points per game. Over 16 games, that would have been an easy league-leading 400 fantasy points, the fifth-best quarterback season of the last decade (more if you give him credit for only playing part of Week 1, but we aren’t looking for hard and fast science here).

So let’s give every player 16 games at the pace they played in 2017 and see what the surprises are. (Yes, essentially this is just sorting players by fantasy points per game, but context matter. See that a quarterback averaged 25.0 points per game and that’s impressive, but tough to conceptualize. “400 points in a season” means more to us.)

(Sign up for a PFF subscription and research your own hypotheticals!) 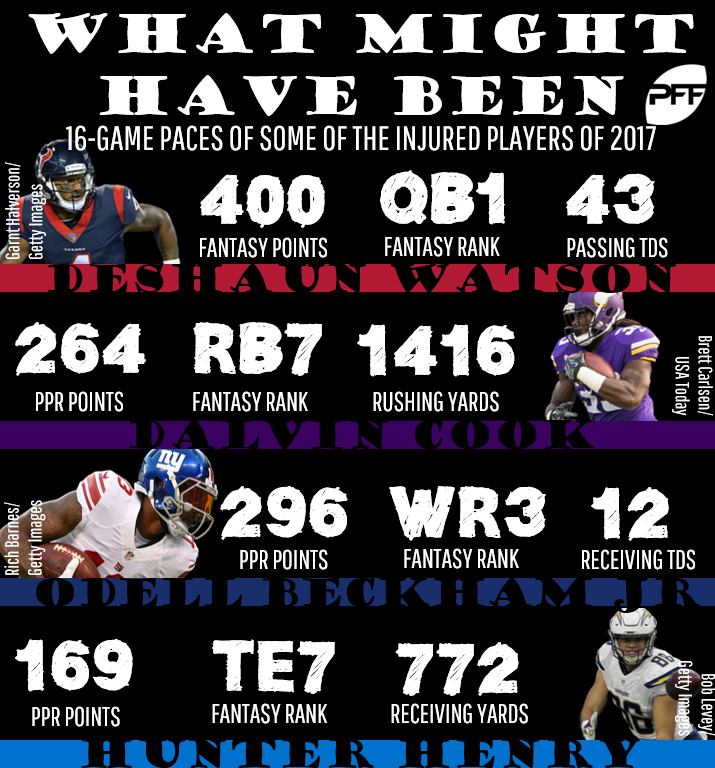 We’ve talked about Watson’s season at length. It was incredible. Putting it into 2017 context doesn’t feel helpful, especially when we step back and realize that it’s hard to imagine regression not working its way in. Instead, lets marvel at the seasons in the last 10 years that were better than a 16-game Watson season.

(Full admission: There aren’t a lot of surprises at quarterback. They come later.) At the pace he played in 2017, including the game in which he was injured in the first quarter, Rodgers would have been the No. 5 fantasy quarterback of 2017 (and that’s if you include Watson’s pro-rated total as well), just between Alex Smith and Newton. And you’d have to think Rodgers would have scored a rushing touchdown or two the rest of the way — he had 0 in 2017, but has averaged 3.1 rushing scores a season when he’s played 10-plus games.

Elliott’s six-game suspension came right in the middle of a productive season where he averaged 20.2 fantasy points a game. As a rookie, Elliott averaged 21.5, and has exactly one game played in his career with single-digit fantasy points. Even with his lack of receiving prowess, Elliott is one of the safest options at the position as long as he keeps himself out of trouble.

It’s easy to forget how strong Cook looked early in the year, since it’s been so long since we saw him and the Vikings did just fine with Jerick McKinnon and Latavius Murray shouldering the load. But Cook’s rookie year started like gangbusters, with 444 yards from scrimmage and 2 touchdowns through four games (and he missed close to half of the fourth game with his injury). Over a full 16 games, that would’ve been 1,516 rushing yards, 360 receiving yards, 8 touchdowns, and a ninth-place PPR finish (with Elliott ahead of him in this exercise). With Cook healthy and McKinnon out of town, the second-year back has extreme upside in 2018.

Peterson was a shadow of himself in 2017, particularly during his stint in New Orleans. Once he got to Arizona, he wasn’t good, but he was better. In six games with the Cardinals, Peterson had 514 yards from scrimmage and 2 touchdowns. Over a full season, that would have been almost 1,200 rushing yards, almost 200 receiving, and more than 5 touchdowns, good for a 24th-place fantasy finish. That was largely workload-based, but Peterson’s always been a workload guy. His career sounds like it’s over, but his last stretch was better for fantasy than we’ll probably remember it being.

Between the early injury, the complaints about off-field stuff, and general Giants malaise, personally I don’t really remember Beckham’s 2017 season being off to that great a start. But his four-game stretch of 2017 would have left him as the No. 3 receiver across the full season. His numbers would have translated to 1,240 yards and 12 touchdowns with 100 total catches. With a healthy Beckham in 2018 and plenty of offensive weapons around him, there’s no reason not to keep him up near the top of the rankings.

This is so very cheating, but Strong played one game for Jacksonville last year. He caught 3 passes for 38 yards and a score and then tore his ACL. A 608-yard season wouldn’t be that impressive, but 16 touchdowns definitely would be. (No I don’t believe Strong would have scored 16 times.)

Henry had his mini-breakout in his second year, with 579 yards and 4 touchdowns in 12 games. That would have translated to the No. 7 tight end over a full season’s worth of games. (I’m just always going to be bitter about him missing 2018.)

Come on, you knew he’d be in here. Reed had 211 yards and 2 touchdowns in 6 games. Across a full season, that would have been about 560 yards and 5 touchdowns (No. 10 tight end), which honestly feels like Reed’s 16-game floor. We know how talented he can be with a full workload, and it’s why he remains an intriguing fantasy option despite missing 28 games across his five seasons in the league.