The NFL draft can be a game-changer for a franchise, and while it takes time to understand the full impact of a draft class, early returns are promising for a number of teams around the league. The New Orleans Saints appear to have a franchise-changing draft while the San Francisco 49ers appear to have pieces in place for their rebuilding process. Rookie contributions will vary across the league depending on roster strength and position depth, but one quick way to see immediate impact is by looking at how many snaps rookies have played around the league.

Here’s a list of the rookie snaps by team. 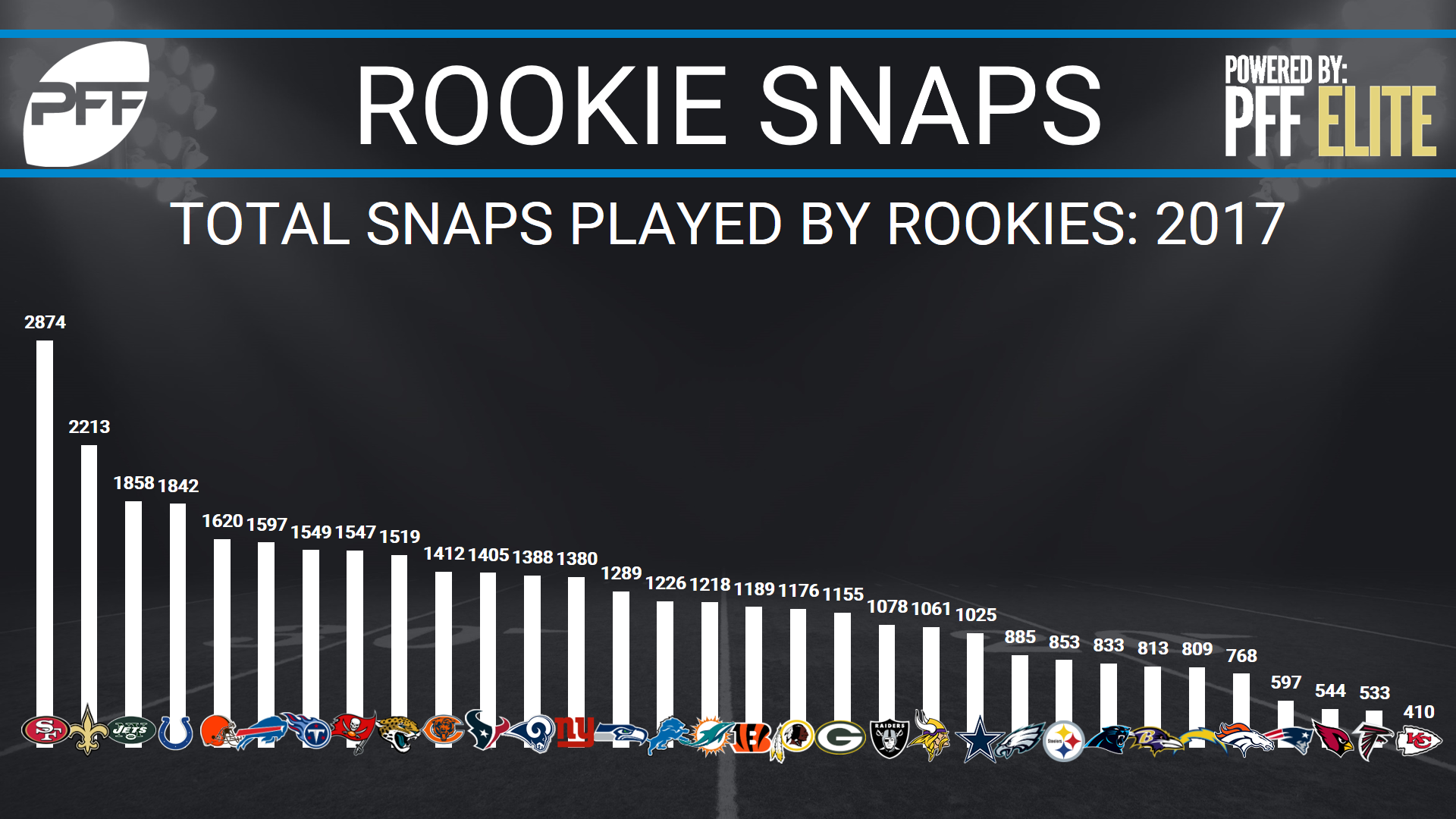 We were big fans of the 49ers’ draft back in April and it’s showed in the early returns. First-round defensive lineman Solomon Thomas has been as-advertised against the run, but still has room to improve upon his 16 pressures on 228 rushes. LB Reuben Foster has been excellent when healthy and his 205 snaps have showed his three-down ability on his way to an 89.0 overall grade that ranks fifth in the NFL. Third-round pick Ahkello Witherspoon has been excellent since taking over as a starter in Week 8 while fifth-round tight end George Kittle ranks second among rookie tight ends with 27 receptions and 277 yards.

First-round cornerback Marshon Lattimore leads all corners with a 93.9 grade and he already looks the part of an elite player. Ramczyk has the top grade among rookie offensive tackles at 80.1 overall while playing both left and right tackle and he’s allowed only 12 pressures on 327 attempts. Running back Alvin Kamara 84.0 overall grade ranks fourth in the league, averaging 6.5 yards per carry and ranking second among rookie running backs with 373 receiving yards. Second-round safety Marcus Williams has the fourth-most snaps among rookie safeties and he’s been productive with a 79.9 grade.

The Jets invested their first two picks at safety in Jamal Adams and Marcus Maye and they make up 75 percent of their rookie snaps this season. Adams leads rookie safeties with 19 stops while Maye has the second-best coverage grade among rookies at 81.7. Sixth-round running back Elijah McGuire has forced 15 missed tackles as a rusher, third-most among rookies.

Hooker leads with 410 snaps, but unfortunately that’s where he’ll finish the season due to a knee injury. He showed off his playmaking ability with three interceptions which leads all rookies regardless of positions. Fifth-round cornerback Nate Hairston ranks second on the team with 386 snaps, while fourth-rounder Marlon Mack has the No. 31 overall grade among running backs at 73.5.

Kizer has taken the bulk of the snaps at quarterback this season, and he’s coming off his best game of the year as he graded at 86.1. First overall pick Myles Garrett has battled injury, but his talent has been on display on his 147 snaps as he’s notched four sacks, three QB hits, and eight hurries on only 88 rushes. Safety Jabrill Peppers has the sixth-most snaps among rookie safeties while TE David Njoku ranks third with 19 receptions. Fifth-round defensive tackle Larry Ogunjobi has played only 114 snaps but has showed promise as a run-stopper with an 80.6 grade.

White is off to a great start as his 88.1 overall grade ranks eighth in the NFL and he’s tied for the league lead with 10 pass breakups. WR Zay Jones has been a starter since Week 1 and leads all rookies with his 429 snaps. OT Dion Dawkins has filled in admirably at left tackle with a 70.6 overall grade on 315 snaps.

It’s a small class in Tampa Bay but they’re getting a lot out of it to this point. O.J. Howard ranks third among rookie tight ends with 227 yards, while WR Chris Godwin has the No. 3 grade among rookie wide outs at 75.1 overall and he’s coming off a career-high 69 snaps last week against the New York Jets. Second-rounder Justin Evans ranks fifth among rookie safeties with 435 snaps, while third-rounder Kendell Beckwith leads rookie linebackers with 30 stops.

First-rounder Leonard Fournette has battled injuries, but he ranks second among rookie running backs with 629 yards and 27 missed tackles forced on the ground. OT Cam Robinson has started since Day 1 and he’s shown the same boom or bust potential that he showed at Alabama. Undrafted free agent Keelan Cole is the surprise of the class and his 373 snaps rank fourth among rookie wide receivers.

The Bears had a small draft class, but QB Mitchell Trubisky has shown his starter potential while Eddie Jackson leads all rookie safeties with an 82.3 overall grade. RB Tarik Cohen has been used all over the field on his 195 snaps.

Prior to his season-ending injury, QB Deshaun Watson’s playmaking was the talk of the NFL, even with his throw-for-throw inconsistency that was prevalent during his time at Clemson. Zach Cunningham has the top grade against the run among rookie linebackers and No. 9 mark in the NFL at 85.7. Third-round running back D’Onta Foreman has a solid 67.6 grade while DI Carlos Watkins has contributed 118 snaps as part of the defensive line rotation.

CB Shaquill Griffin has been locked in at right corner for most of the season and he ranks third among rookie cornerbacks with seven pass breakups. Second-rounder Ethan Pocic has the second-most snaps with 249 and he’s started at left guard the last three weeks. Third-round defensive tackle Nazair Jones has contributed 215 snaps up front and his 74.4 pass-rush grade ranks second among rookie interior defensive linemen.

Jarrad Davis ranks second among rookie linebackers with 457 snaps and he’s tied for third with 15 stops. Sixth-round defensive tackle Jeremiah Ledbetter has the second-most snaps with 221 and he’s contributed seven pressures on his 130 rushes.

CB Cordrea Tankersley has only missed a handful of plays since his Week 4 debut and his 435 snaps rank fifth among rookie corners. First-rounder Charles Harris ranks fifth among rookie edge defenders with 16 total pressures while fifth-rounder Davon Godchaux is tied for the lead among rookie interior defensive linemen with 13 stops.

Top two picks, DI Jonathan Allen and edge Ryan Anderson, have been limited to 159 and 130 snaps respectively though Allen still leads all rookie interior defensive linemen with 16 pressures. Fourth-round safety Montae Nicholson has a solid 77.3 coverage grade on his 301 snaps while sixth-rounder Chase Roullier has 213 snaps and he’s started the last three games at center.

Center Pat Elflein makes up 58 percent of Minnesota’s rookie snaps as he’s yet to come off the field this season and he’s coming off his best game as a pro last week against the Washington Redskins. RB Dalvin Cook was off to a great start before being lost for the season due to injury and his 86.4 rushing grade ranks third in the league. Fifth-round guard Danny Isidora has played 114 snaps, including one start in Week 8.

Over 82 percent of Dallas’ rookie snaps have come from three players: CB Jourdan Lewis, S Xavier Woods, and edge Taco Charlton. Lewis has the No. 6 overall grade among rookie corners at 77.6, while Woods has a solid 73.9 grade. Charlton has 210 snaps as part of the defensive line rotation, but he’s off to a slow start with only eight pressures on 125 rushes.

Christian McCaffrey and WR Curtis Samuel make up 83 percent of Carolina’s rookie snaps, with McCaffrey leading all rookie running backs with 57 receptions and a 92.0 receiving grade. Samuel is now out for the season after catching 15 passes for 115 yards (7.7 yards per reception).

First-rounder Marlon Humphrey has the No. 4 coverage grade among rookie corners at 81.0 and he has four pass breakups on only 27 targets. Second-round edge defender Tim Williams has only played 61 snaps fellow second-rounder Tyus Bowser has five pressures on his 104 snaps. Guard Jermaine Eluemunor has the second-most snaps among Baltimore rookies, including two starts.

The injury bug struck the top end of the Chargers’ class as first-round wide receiver Mike Williams has played only 74 snaps while second-round guard Forrest Lamp was lost for the season during training camp. CB Desmond King has been a fifth-round steal, as his 83.3 coverage grade ranks third among rookie cornerbacks. Dan Feeney has started the last two games at guard and his 79.6 run blocking grade leads all rookie guards.

First-round OT Garett Bolles makes up 79 percent of Denver’s rookie snaps and he’s had his ups and downs with 28 total pressures surrendered, tied for 10th-most among NFL tackles. WR Isaiah McKenzie ranks second among Denver rookies with his 84 offensive snaps.

Haason Reddick has played all over the field for the Cardinals, rushing the passer 140 times while dropping into coverage on 101 snaps. Fifth-round guard Will Holden has the second-most snaps among Cardinals rookies, 86 of which came in a Week 4 start.

All but seven of Atlanta’s rookie snaps have come on the defensive side of the ball, led by edge Takkarist McKinley who ranks third among rookie edges with 25 pressures. Linebacker Duke Riley ranks second among Atlanta rookies with 189 snaps, though he hasn’t seen the field since Week 7 due to injury.

RB Kareem Hunt makes up 94 percent of Kansas City’s rookie snaps and he’s a potential rookie of the year candidate with his 90.5 overall grade that leads all running backs. Hunt ranks second the league with 800 rushing yards and he’s forced the most missed tackles with 42. Defensive end Tanoh Kpassagnon ranks second among Chiefs’ rookies with only 14 snaps.