Ranking all 32 secondaries ahead of the 2019 NFL season

Of all the positional unit rankings that we’ve put out in recent weeks on PFF.com, this is probably the one you want to be the highest on (not counting QBs). Having a good secondary we’ve found correlates more so than anything else to having a good defense in the NFL today. The passing game is king, and these are the teams best equipped to shut that down. 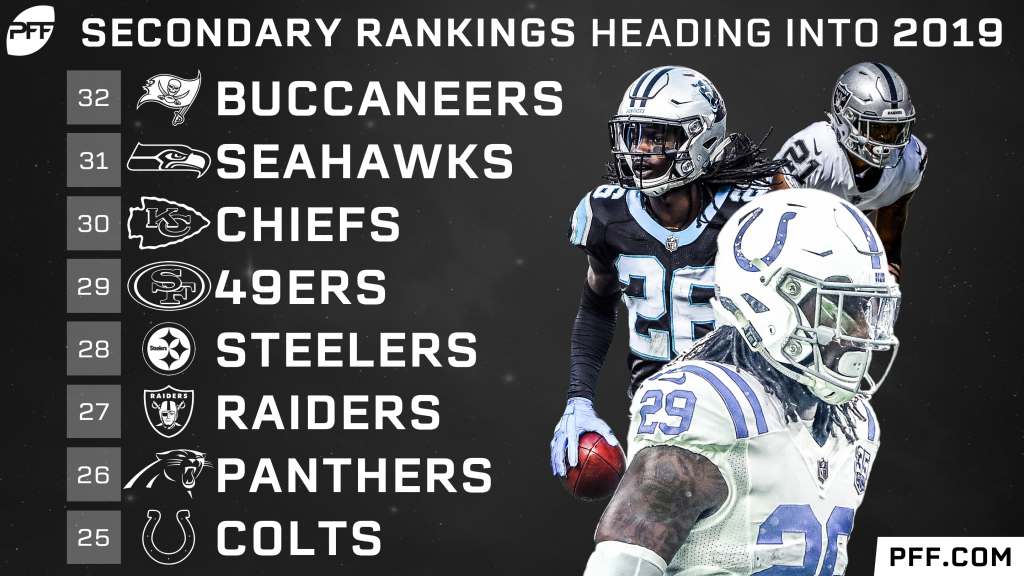 They’ve thrown a ton of resources at the position of late, but until we see any of them show signs of promise, this is where the Bucs land. They’ve spent five picks in the first three rounds on their secondary in just the past two drafts alone.

We’re now entering Year 3 of the Shaquil Griffin experiment, and it’s worth questioning if things will ever turn around. Griffin allowed a passer rating of 100.4 in his coverage last year while breaking up only five passes.

It was rough last season, and the unit only marginally improved this offseason. They have a lot invested in Tyrann Mathieu being able to recapture a form we haven’t seen from him since 2015. After he tore his ACL that year, Mathieu hasn’t earned a coverage grade higher than 70.6 since.

In an offseason where the 49ers signed yet another running back, the 49ers inexplicably left their secondary fairly status quo. Well, they did add Jason Verrett who has averaged 108 snaps per year over the past three seasons due to injury.

It’s easy to forget about him because he plays the slot, but Mike Hilton has quietly been doing a lot of heavy lifting for the Steelers defensively. His 32 coverage stops over the past two seasons are the sixth most in the NFL.

The Raiders now have a number of former first-rounders in their secondary, but the one Raiders fans have to be keeping their fingers crossed for is Gareon Conley. He had a very up-and-down second season, but he finished with some impressive stats. He allowed a completion percentage against of 54.0 and a passer rating of 72.8.

Yet another team who is relying on youngsters taking a big step forward. Last year’s second-rounder Donte Jackson is their best bet on that front. He finished the season like gangbusters, allowing only 18 yards over his final three games.

While the rest of the Colts secondary is full of fairly scheme-specific players, Malik Hooker looks like the one talent that transcends that in Indy. Hooker recovered from an ACL injury nicely in Year 2, posting an 81.6 coverage grade on the season. 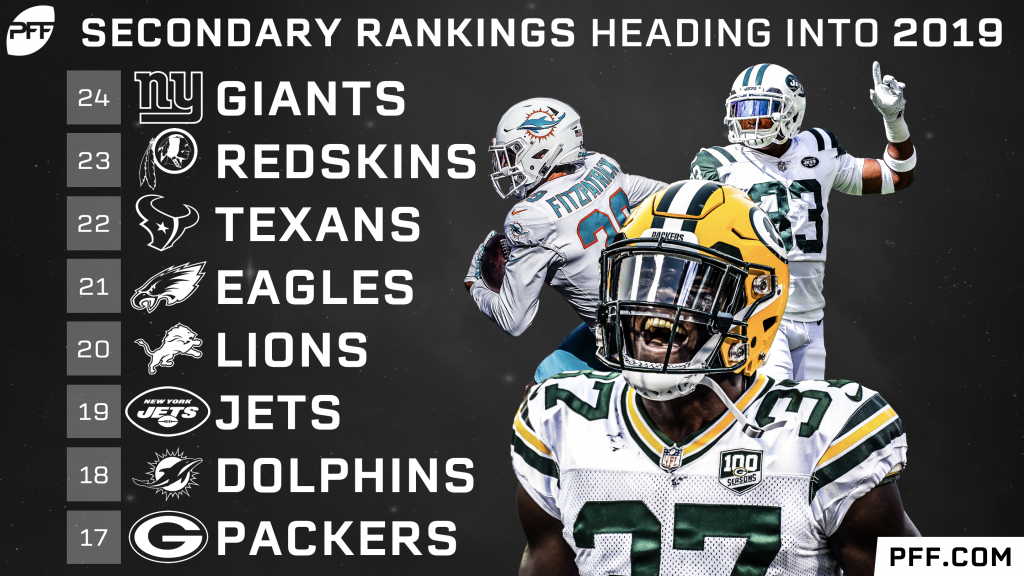 We’ll look back on Janoris Jenkins’ 2016 season as a distinct outlier over the course of his career. After never having allowed fewer than 700 yards in a single season before the Giants signed Jenkins, the former Rams corner allowed only 484 yards and a completion percentage against of 50.0. Since then he’s reverted back to the player we saw in Los Angeles and allowed 788 yards last season.

Even with all the money they have invested in Josh Norman and Landon Collins, the Redskins' depth here is still too concerning to get any higher. Fabian Moreau did little last season to inspire confidence in him starting across from Josh Norman. He broke up all of four passes on 559 coverage snaps and had a passer rating of 105.8 against.

What Johnathan Joseph did at 34 years old last season deserved far more credit nationally than it got. Not only did he have an outstanding year, allowing a passer rating of 76.5 and earning an 81.1 coverage grade, but also he was 34 years old! We see 30-year-old corners falling off an age cliff, and Joseph is doing it after he was drafted prior to PFF even grading players.

Ronald Darby obviously came with an injury red flag, but his one-year, $5 million deal was an absolute steal for the Eagles. He offers consistency in coverage that none of the other corners on the Eagles roster can match. Darby has allowed a passer rating below 90 in each of the past two seasons.

Darius Slay’s consistency for an unspectacular Lions defense over the past four seasons has been incredible. He’s had 10-plus pass breakups in each of those seasons and earned a PFF coverage grade over 75.0 in each as well.

Jamal Adams carries a fairly rag-tag group to this ranking. The only question is will Gregg Williams utilize Adams to his full potential. If you simply stick him in the box or deep, you’re doing Adams’ talent a disservice. Last year, he took 489 snaps in the box, 137 along the line of scrimmage, 172 over the slot, 40 split wide and 281 deep.

Over the past two seasons, few cornerbacks in the NFL have been worse for opposing quarterbacks to target than Xavien Howard. He’s racked up 11 interceptions over that span and allowed a passer rating under 70.0 in each season. Now, if he can just clean up the 18 penalties he’s amassed in that time, he’d have a claim to being the league’s best corner.

The Packers were a little ways lower on this list at the beginning of last year, and we said this secondary could go a number of different ways. They move up to the middle of the pack now, and we’re still saying the same thing. The Packers' nickel package could feasibly start four players within their first three years in the NFL while their dime could add a fifth. 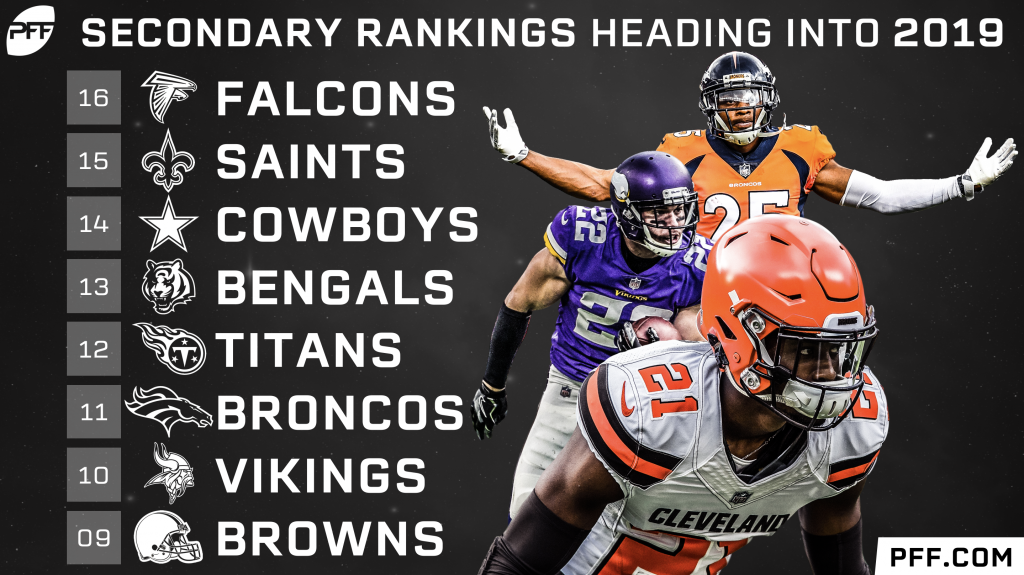 It wasn’t only Robert Alford that had a down year in 2018. There was a point in time where Desmond Trufant looked as if he’d be one of the elite cornerbacks in the NFL. In fact, he allowed only a 53.4 completion percentage against in his rookie season. Since then though, Trufant has yet to match that figure and allowed a career-high 61.8 completion percentage against last season.

We might be talking about Marshon Lattimore as the best cornerback in the NFL if he didn’t have to face off against Julio Jones and Mike Evans four times a year. If you take out Lattimore’s matchups against the Falcons and Bucs over his two-year career, he’d have a 90.5 coverage grade for his career and a passer rating against of 72.2.

On a Cowboys defense full of breakout performers, Byron Jones’ may have been the most crucial to their success in 2018. He allowed only 53.6% of his targets to be completed while breaking up 10 passes during the regular season.

William Jackson’s lockdown play since he first saw the field in 2017 is what propels the Bengals to this rankings. He’s allowed 53-of-112 career targets for only 644 yards over that span and had double digits pass-breakups each season.

Malcolm Butler’s fall from grace was fairly precipitous, but his late-season turnaround should give Titans fans some semblance of hope. After giving up 675 yards through the first 11 games of the season, Butler gave up only 103 over the last five while picking off two passes.

The Broncos log jam at slot cornerback is going to be interesting to see shake out. Chris Harris Jr. played 440 slot snaps last season for the Broncos and now they added Bryce Callahan and Kareem Jackson, who played 610 and 328 slot snaps, respectively, in 2018.

While a lot of the blame got heaped on Kirk Cousins and the offensive line for the Vikings struggles in 2018, this was the unit that quietly took a huge step backward. Xavier Rhodes earned the lowest coverage grade of his career (55.1) while Harrison Smith went from a 91.6 coverage grade in 2017 to 68.7 last season.

We can’t wait to see what Denzel Ward does for an encore in Cleveland after a stellar rookie season. Targeting him last season netted opposing quarterbacks a measly 5.5 yards per attempt and 70.7 passer rating. 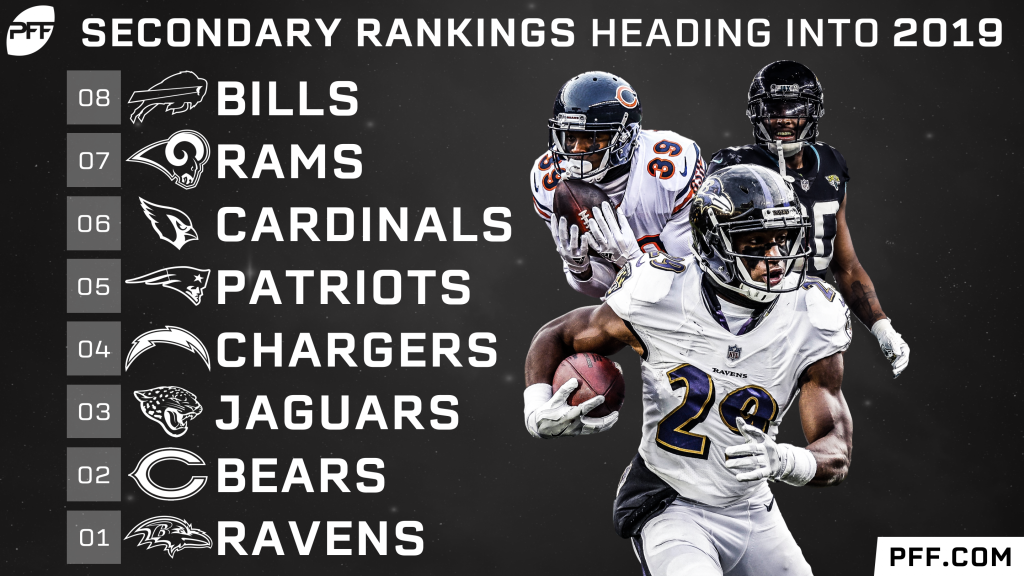 There are still question marks at the corner position across from Tre’Davious White, but no one is questioning what might be the best safety tandem in the NFL. Micah Hyde and Jordan Poyer have earned coverage grades of 93.1 and 91.1 respectively over the past two seasons.

There are two words that should give Rams fans everywhere reason to be optimistic: contract year. Marcus Peters was lit up for the majority of last season, giving up over 100 yards on four separate occasions. He’ll have to get back to his Kansas City form to earn a big-money second contract.

This is assuming full strength as Patrick Peterson’s suspension looms larger. Robert Alford was a liability in Atlanta last season, but if he comes close to replicating what we’ve seen from him in recent years, he’ll be the best corner the Cardinals have had across from Peterson in a while. Alford earned a 74.2 coverage grade in 2017 prior to a 53.1 last season.

New England returns the entire secondary from what was our second-ranked unit from a year ago. The only worry is how long the McCourty twins can maintain their high-level of play with their 32nd birthday coming in the preseason.

You could make a legit case that the Chargers' secondary is home to the league’s best corner (Casey Hayward), safety (Derwin James) and slot corner (Desmond King). They’ll need Trevor Williams to bounce back in a big way after he was torched for a 132.1 passer rating before ending up on IR last season.

The rest of the starting secondary from the vaunted 2017 defense has moved on, but does it really matter when you still have two of the top-10 corners in the game? Only six cornerbacks have earned coverage grades of 90.0-plus over the past three seasons combined. The Jaguars have two of them.

Chicago was the owner of the top spot in our secondary rankings at the end of last season, but they lost two starters from it. The loss of slot cornerback Bryce Callahan has flown under the radar, but he’s earned higher coverage grades in every single year of his career than replacement Buster Skrine has ever earned in his career.

The Ravens were already a top-five secondary last season, and the rich got richer as they swapped out Eric Weddle for a future Hall of Famer. They’ll just need Earl Thomas to stay healthy as he’s earned coverage grades over 89.0 in five of his last six seasons.