Key stats for every Championship Round playoff team

Team Stat: The Jaguars' offense has used play action on 44.1 percent of their pass attempts during the postseason, the highest rate among offenses.

Elite Stat: Quarterback Blake Bortles has posted a passer rating of 105.6 on his postseason play-action attempts, the third-best mark among playoff quarterbacks. 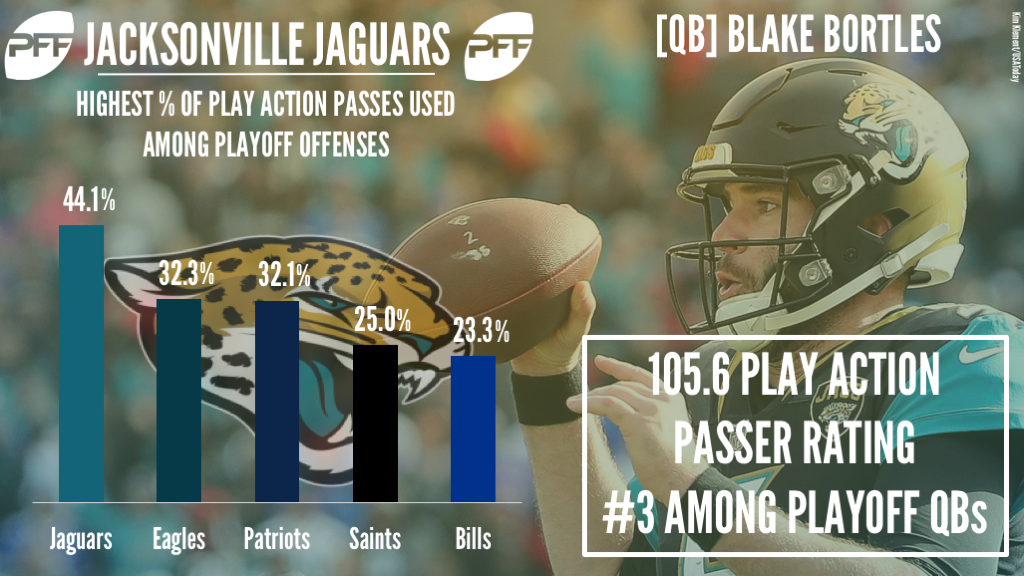 Bortles has been far from flashy in his two playoff starts, but he has been both clean and effective, which is all the team has really needed him to do with an elite defense waiting on the sidelines. Over the last two playoff games, the offensive coaching staff has played to the team’s strengths and used play action on 24 of their 49 pass attempts. Bortles has completed 13 of those passes for 176 yards, both of his postseason touchdowns and a passer rating of 105.6, a mark that exceeds his passer rating on standard attempts by 39.3. With running back Leonard Fournette in the backfield, the Jaguars will likely continue this trend in the hopes that it provides them an edge in the AFC Championship Game.

Team Stat: The Patriots' offense fielded a catch rate (percentage of receptions compared to targets) of 66.3 percent this year, the fourth-best mark among offenses.

Elite Stat: Quarterback Tom Brady posted an adjusted completion percentage of 70.2 percent on his attempts under pressure this year, the second-best mark among quarterbacks. 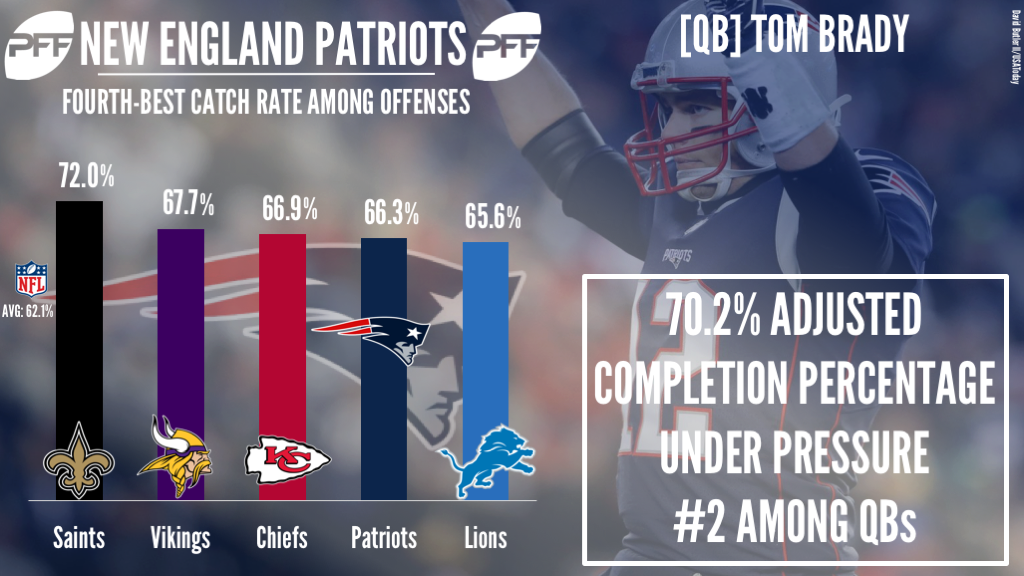 While PFF’s highest graded signal-caller is still under center, the Patriots' offense will continue to be one of the most efficient units in football. Through 16 games of the regular season, the Patriots' skill position players combined to catch 389 balls on 587 pass attempts, and their catch rate of 66.3 percent was the fourth-best mark among offenses this year. Brady’s accuracy has certainly played a big part in that, as the future Hall of Famer logged an adjusted completion percentage (the PFF metric that outside factors to give a clear measure of accuracy) of 76.0 percent this season, which ranked seventh among quarterbacks. What’s more impressive, however, is that he posted an adjusted completion percentage of 70.2 on his pressured attempts, which was good for second among the same group. Both Brady’s accuracy under pressure and his team’s sure-handedness will play a huge part as they take on the Jaguars, whose defensive line produced more pressure on a per-snap basis than any unit in football, and whose defense allowed the lowest passer rating among teams this season.

Team Stat: Throughout the regular season, the Vikings' defense allowed a passer rating of just 59.2 on third down this season, which was the second-best mark among defenses.

Elite Stat: Cornerback Mackensie Alexander allowed a passer rating of just 71.1 this year, which ranked 23rd of 122 cornerbacks with at least 175 coverage snaps. 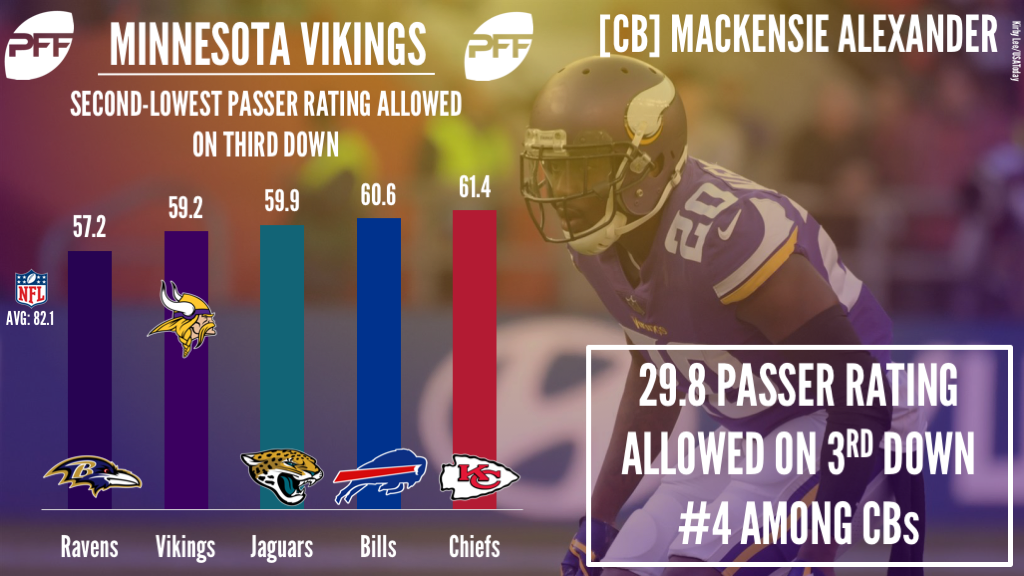 During the regular season, the stout Vikings defense allowed a passer rating of just 59.2 on their opponent’s third-down attempts, which was the second-best mark among defenses this year and something that ultimately helped push them to become the league’s best third-down defense. Alexander, who has been a vital player for the defense in third-down passing situations, was a key factor in this and allowed a passer rating of just 29.8 on third-down targets, the fourth-best mark among cornerbacks with at least 15 third-down targets. The Vikings will need to keep that up this week, as the Eagles' offense managed to convert 46.2 percent of their third downs last week, the fifth-best mark among playoff teams.

Team Stat: The Eagles' defense has produced pressure on 40.8 percent of their passing snaps this year, the best mark in the league.

Elite Stat: Interior lineman Fletcher Cox racked up 54 pressures from 427 pass-rush snaps this year, resulting in a pass-rush productivity of 9.9, the third-best mark among defensive tackles with at least 130 pass-rush snaps. 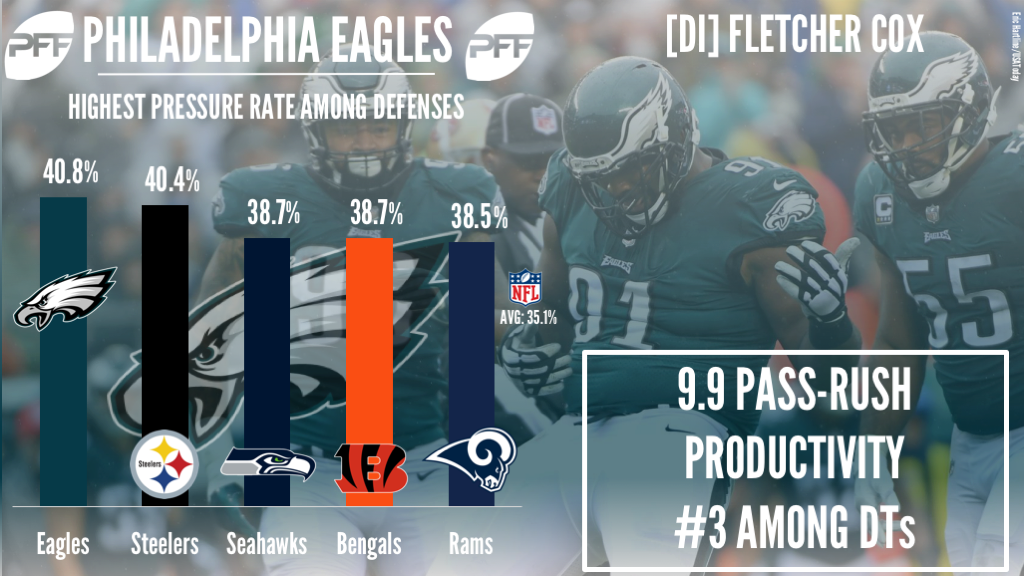 Through 16 games of the regular season, no defense in football produced more pressures than the Philadelphia Eagles, who combined to put up a whopping 287 pressures, 19 more than the Jaguars, who were next closest defense. All told, they produced pressure on 40.8 percent of their pass-defense snaps, the highest rate league-wide. Cox has been an integral part of that pass-rush, as he personally contributed 54 of those pressures, the fifth-best pressure total among defensive tackles. Creating pressure will be key for the Eagles this weekend, as Vikings quarterback Case Keenum managed a paltry passer rating of just 5.1 on his pressured throws last week, the lowest mark of the playoffs so far.