Key stats for every Divisional Round playoff team

Team Stat: The Falcons finished the regular season as the top graded overall team, by our metrics.

Elite Stat: Wide receiver Julio Jones has put up an average of 3.06 yards per route run so far this year, which is the best mark among wide receivers with at least 40 targets. This has ultimately helped propel him towards a PFF overall grade of 91.8. 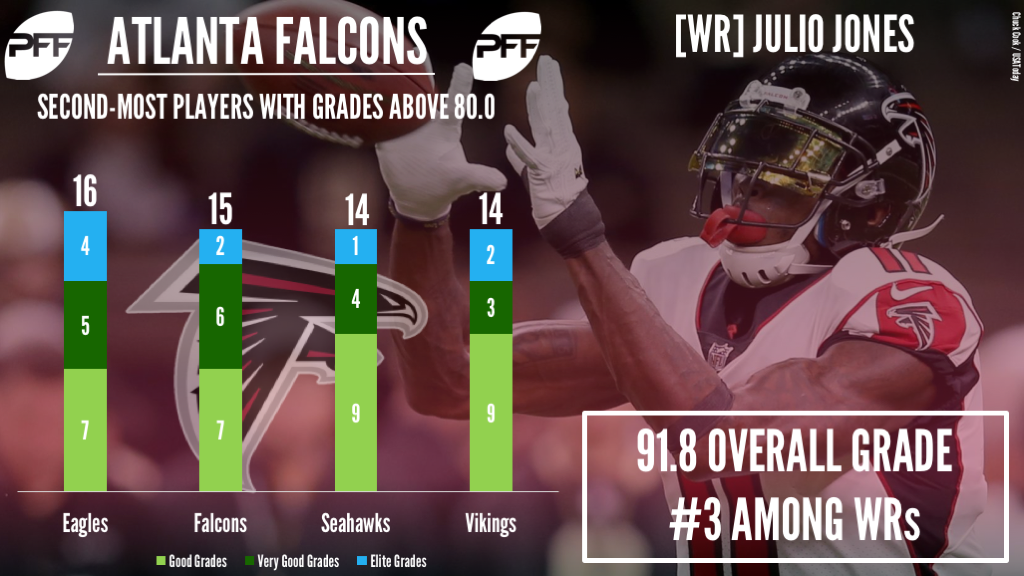 Last week’s victory against the Los Angeles Rams proved exactly why you shouldn’t count a talented Falcons team out. Arguably one of the most talent-laden teams in football, Atlanta is PFF's highest-graded unit in the league, and they graded only slightly below the 2016 version of themselves that went to the Super Bowl. As has become expected over recent years, Jones is leading the charge offensively, in terms of overall grade, and through 18 games of regular season and postseason play, Jones’ overall grade of 91.8 is good for third among qualifying pass catchers.

Team Stat: The Eagles’ front seven (interior defenders, edge defenders and linebackers) have combined to produce a run-stop percentage of 8.4 percent, the best mark among the league’s 32 units.

Elite Stat: Edge defender Brandon Graham has logged a run-stop percentage of 13.7 percent so far this year, which is the best mark among 4-3 defensive ends with at least 100 run-defense snaps. 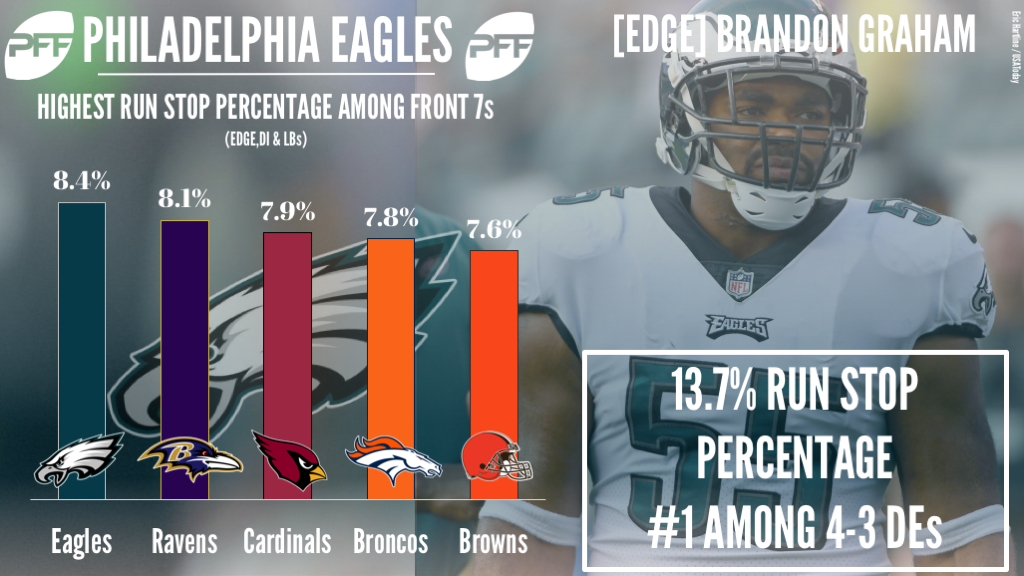 With quarterback Carson Wentz recovering from an ACL injury, Nick Foles is set to make his second career playoff appearance. If Foles fails to improve on his recent play, the team’s front seven will need to step all the way up if they’re to stifle the Falcons' rushing attack and advance to the conference championship. The Eagles' front seven has shown that they’re more than capable of doing so, however, as they have collectively produced a run-stop percentage of 8.2 percent, the best mark among defenses. No player has been better at this than Graham, who has produced 25 run stops on his 183 run-defense snaps this season, generating a run-stop percentage of 13.7 percent, the best mark among qualified 4-3 defensive ends.

Team Stat: The Saints' offensive line has posted a collective pass-blocking efficiency of 84.8 this year, the best mark among the league’s 32 offensive lines.

Elite Stat: Left tackle Terron Armstead has logged a pass-blocking efficiency of 96.9 so far this season, which is the seventh-best mark among tackles with at least 300 pass-blocking snaps. 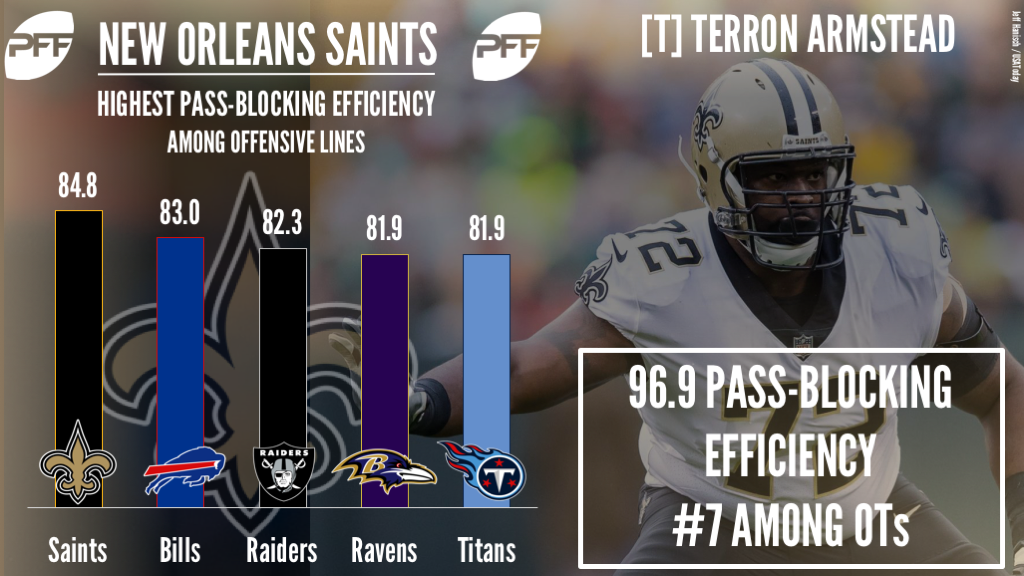 This year, the Saints have become one of the most well-rounded teams in all of football and have executed at a high level in almost every facet of the game. Nowhere is this more apparent than in pass protection, where the offensive line has allowed just 115 quarterback pressures, posted a pass-blocking efficiency of 84.8 and kept quarterback Drew Brees free from pressure on 77.3 percent of his dropbacks, all of which are the top marks among offensive lines. This year, the unit has been solidified by their left tackle Armstead, who has allowed just 12 pressures on his 319 pass-blocking snaps.

Team Stat: The Vikings' defense has allowed just 25.2 percent of their opponent’s third-down attempts to be converted, the best mark among the league’s 32 defenses.

Elite Stat: Linebacker Anthony Barr racked up 38 stops so far this season, which is tied for the seventh-most among 4-3 outside linebackers. 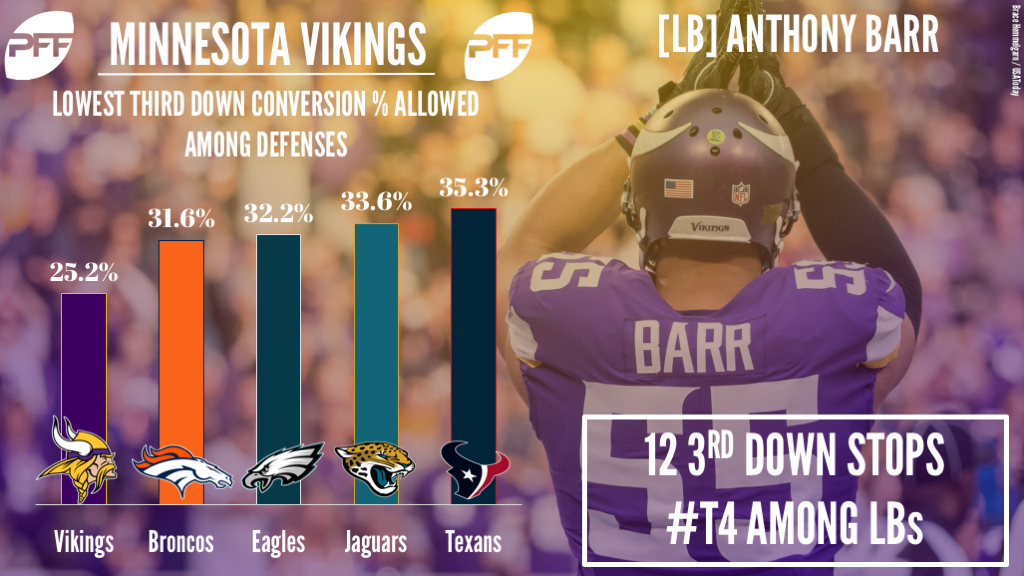 The stingy Vikings defense has been a force to reckon with this season and adding in with their high-functioning offense makes them a real danger to any team in the NFC. Focusing on the defensive side of the ball, the Vikings allowed just 51 conversions from 202 third-down attempts this season, a conversion rate of just 25.2 percent, the best rate among NFL defenses. Barr has been a key contributor in this, as 12 of his 38 stops have come on third down, which ties him with teammate Eric Kendricks for the fourth-most among all defensive players in the league.

Team Stat: The Titans' defense is allowing a passer rating of just 40.1 on throws of 20 or more yards downfield, the second-best mark among NFL defenses.

Elite Stat: Cornerback Adoree’ Jackson has allowed 0.99 yards per cover snap through the wild-card round of the playoffs, tied for fourth-fewest among rookie cornerbacks. 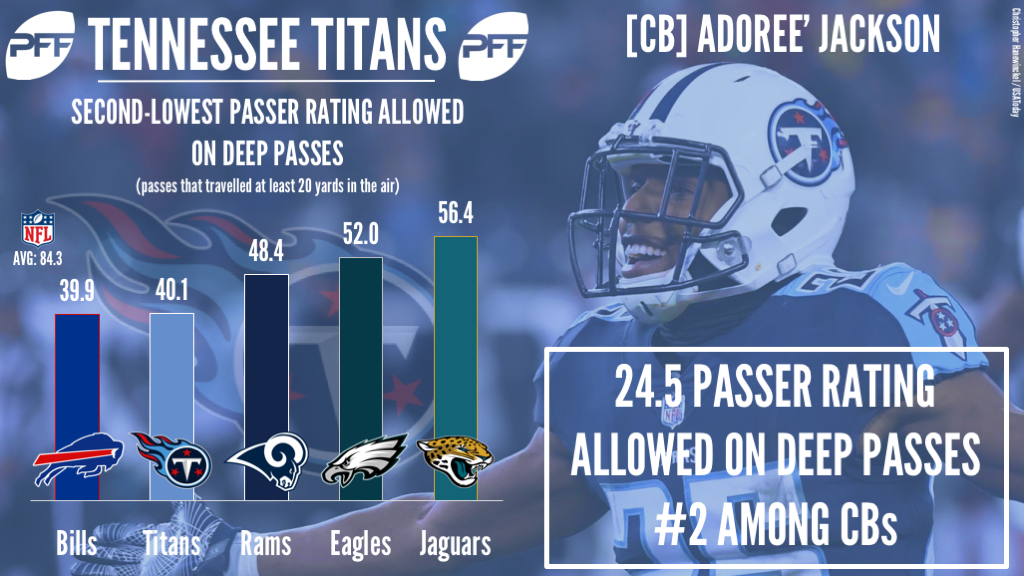 The Titans, who pulled off an upset victory over the Kansas City Chiefs last week, have been tremendous when defending the deep ball this season, which could play a pivotal role as they attempt to keep the defending Super Bowl champs at bay. Through 17 games, the Titans' defense has combined to allow a passer rating of just 40.1 on throws of 20 or more yards downfield, which ranks second to only the Buffalo Bills this year. A rookie cornerback out of USC, Jackson has been a key cog in defending such passes, and through 17 games, has allowed a passer rating of just 24.5 on deep passes, the second-best mark among cornerbacks with at least 15 deep targets.

Team Stat: The Patriots' offense has scored 42 red-zone touchdowns so far this season, which is three more than the next closest offense. Collectively (passing and rushing), they’ve scored a touchdown on 34.26 percent of their red-zone attempts, the league’s third-best percentage.

Elite Stat: Wide receiver Danny Amendola has generated a wide receiver rating of 103.1 – the 18th-best mark among receivers with at least 75 targets. 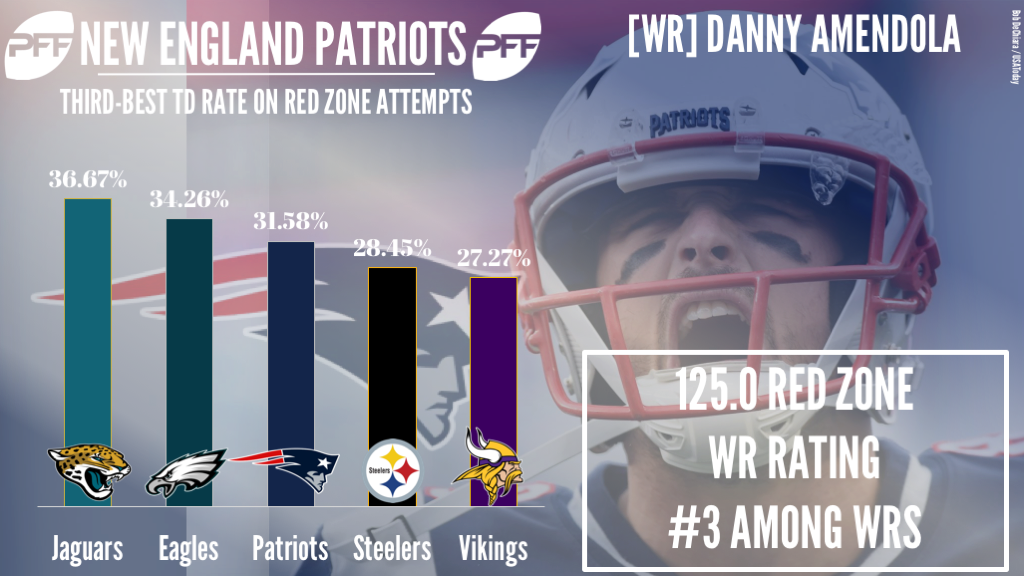 Led by PFF’s first team All-Pro quarterback  Tom Brady, the New England Patriots have been one of the league’s most dangerous red-zone offenses this year, having found the end zone on 34.26 of their 133 red-zone attempts, the league’s third-highest success rate. Of course, having the best quarterback in the game at your disposal helps, but one underrated aspect of the team’s red-zone production this year has been Amendola, who has generated a passer rating of 125.0 on his 12 red-zone targets, the third-best mark among receivers with at least 10 passes thrown their way in the red zone. This is one of the many reasons why the New England Patriots are PFF’s odds on favorite to make it to Super Bowl 52 as the AFC’s representative.

Team Stat: The Jaguars' defensive line has produced a cumulative pass-rush productivity of 9.3 – the best mark among the league’s 32 defensive fronts.

Elite Stat: Edge defender Calais Campbell has churned out 81 pressures so far this season, which is the most among all 4-3 defensive ends through 17 games. 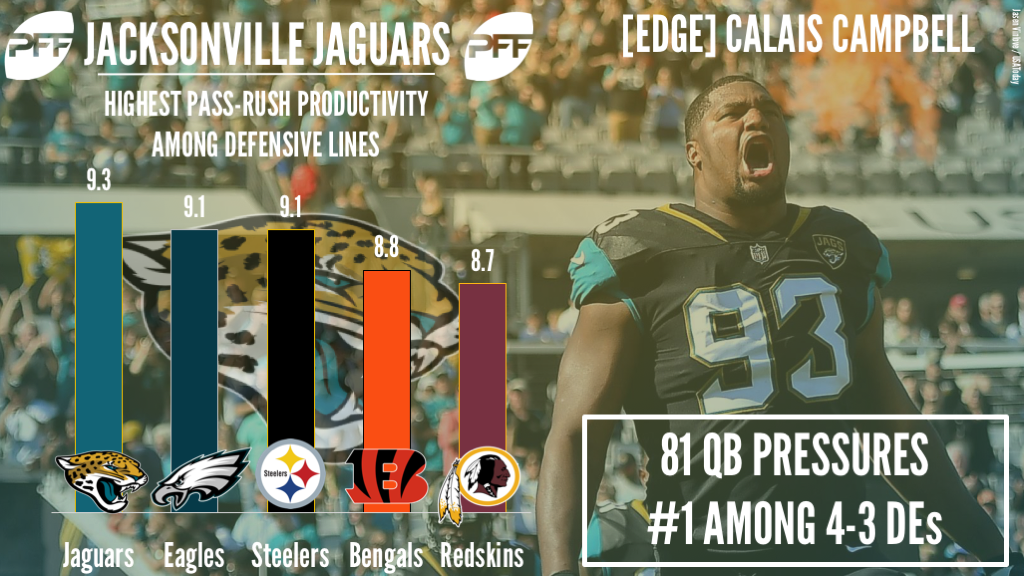 The defensive line that led to the moniker of ‘Sacksonville' has more than lived up to the nickname this year, as they have collectively racked up a whopping 55 sacks and produced a pass-rush productivity of 9.3 as a group, both of which are the best marks among the league’s defensive fronts. The leader of this incredibly productive unit is none other than 10-year veteran Campbell, who has personally tallied 81 quarterback pressures through 17 games, the most among the league’s 4-3 defensive ends.

Team Stat: The Steelers' offensive players have dropped just 5.65 percent of the catchable passes thrown their way this season, the third-best mark among the league’s 32 offenses.

Elite Stat: Wide receiver JuJu Smith-Schuster has dropped just two of the 60 catchable targets thrown his way this year, giving him a drop rate of 3.33, which is the sixth-best mark among receivers with at least 75 targets. 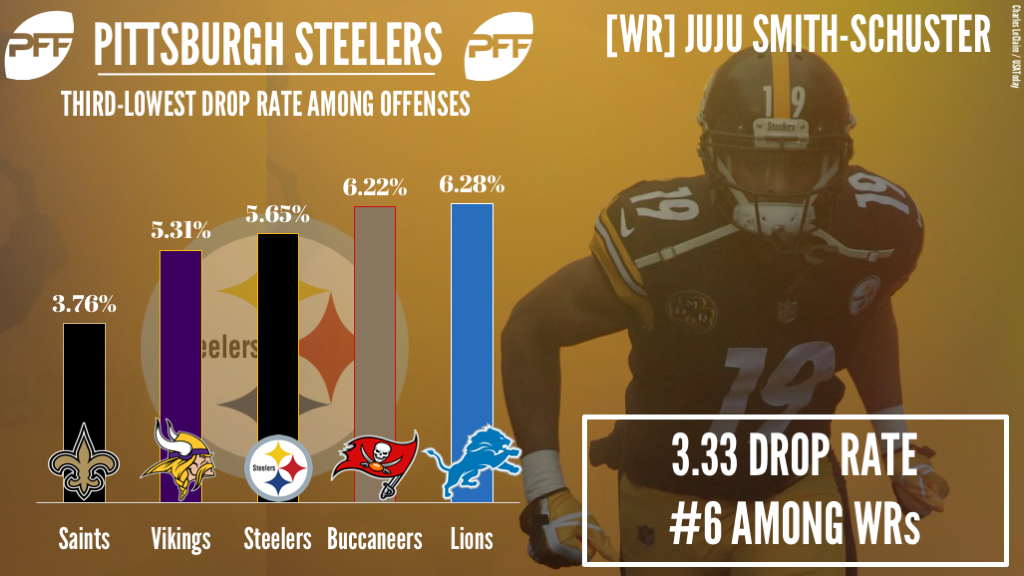 Arguably the most talented passing attack in football, the Steelers’ skill players have certainly been sure-handed this year and have combined to drop just 23 of their 407 catchable targets. Rookie wide receiver Smith-Schuster has played a key part in this, as he’s been one of the most reliable pass catchers in the league the year, having dropped just two of the 60 catchable targets thrown his way.