• After being at the bottom of the league in perfectly covered plays to start the season, the Chargers had the most in their Week 9 win over the Falcons (nearly 55%), also making the fewest coverage mistakes.

Following our extensive research on coverage in football, and the creation of Perfectly Covered Plays and Adjusted Coverage Rate, we now have recent data to analyze from the ninth week of the NFL season.

To note again, we made a slight change in the Perfectly Covered Plays calculation last week to improve the metric. The contents of this change included removing plays with screen passes, and it lowered the perfectly covered play rate 6.6%. Read more about the updated calculation in last week’s coverage update.

Let's evaluate how each team and defender performed in coverage in Week 9. 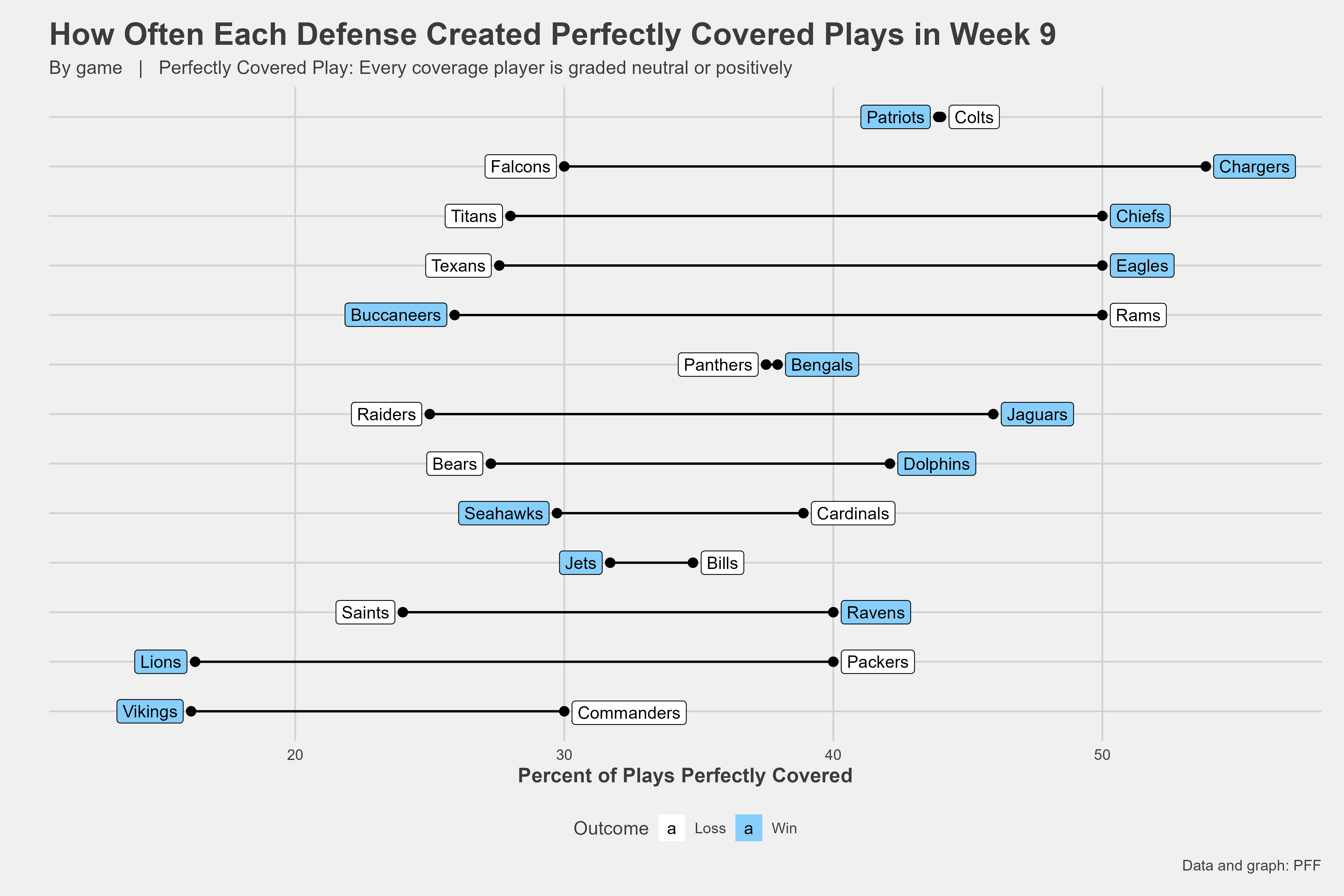 On the other hand, the Minnesota Vikings and Detroit Lions created the lowest percent of perfectly covered plays, each at only about 15%. However, they both overcame their lack of defensive chemistry to grab wins this week.

Perfectly Covered Plays is not just a defensive stat; preventing such plays is relevant for offenses, too. The Falcons’ offense faced the highest percent of perfectly covered plays in Week 9, when Marcus Mariota was held to only 129 passing yards as Atlanta relied heavily on the run game. The Green Bay Packers and Washington Commanders offenses faced the least percent of perfectly covered plays this week. However, with Aaron Rodgers throwing three interceptions and Taylor Heinicke also throwing a costly one, their offenses couldn’t capitalize. 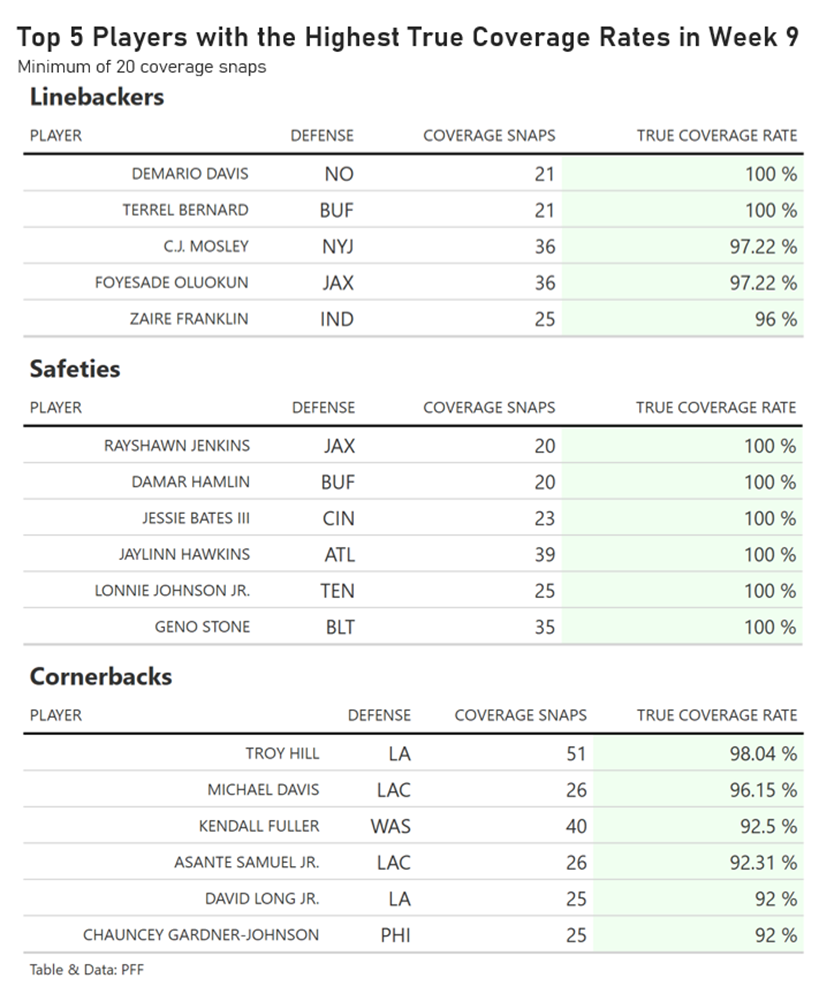 New Orleans Saints vet Demario Davis and Buffalo Bills rookie Terrel Bernard were the only linebackers to be perfect in coverage in Week 9. Davis has been stellar all season, while Bernard had a great day after playing limited snaps in previous weeks. CJ Mosley and Foyesade Oluokun tied for second place after great showings in the Jets' and Jaguars' respective victories.

The Rams and Chargers each had two cornerbacks make the top 5 this week, all locking down pass catchers over 90% of the time. Troy Hill had numerous positive coverage grades for the Rams against Chris Godwin, and Michael Davis did the same against Drake London.

Bills safety Damar Hamlin has been super impressive lately, with his third perfect coverage game in four weeks. Lonnie Johnson kept Travis Kelce in check when lined up against him, and Jessie Bates didn’t let D.J. Moore get open.

There were two plays in Week 9 where the coverage defender earned a coverage grade of -2, which is the lowest possible grade on a play, and they both happened in the Rams-Buccaneers game. Buccaneers safety Keanu Neal was the nearest defender who left Cooper Kupp get wide open downfield (which resulted in a touchdown), while Rams safety Nick Scott failed to cover Chris Godwin.

The Packers just lost Rashan Gary for the entire season, and they also might be without cornerback Eric Stokes. He has been slightly above average this season with a cumulative true coverage rate of 82.8%, but Stokes was much better at covering receivers in the beginning of the season. Keisean Nixon filled in for him and played well this week, but losing Stokes wouldn’t be great for this defense.

We can also check in on some 2022 draft picks based on how they performed in coverage. The rookies with the highest True Coverage Rates in Week 9 were:

New England Patriots cornerback Jack Jones has been great all season, but he finally gets his first coverage Rookie of the Week honor after locking down Alec Pierce. Chicago Bears safety Jaquan Brisker continues to impress, earning the title, even with a slightly-below-average true coverage rate for safeties. Finally, Bills linebacker Terrel Bernard was perfect in coverage, which is amazing for a rookie.

However, some rookies struggled a little, with safety Jalen Pitre (71.4%), cornerback Derek Stingley (72.4%), and linebacker Christian Harris (75%) having the lowest true coverage rates. It just so happens that these players all play for the Houston Texans, whose coverage unit had a rough game against the Eagles. This is not what you want to see from your first-, second- and third-round draft picks, so hopefully the Texans can clean up their defensive play.

In addition to perfectly covering the highest percent of plays in Week 9, the Chargers made the fewest coverage mistakes. They and the Rams only had 1 player each with a below-average true coverage rate, but everyone else was stellar. In their come-from-behind victory, the Jacksonville Jaguars were able to minimize coverage mistakes as the game went on, which allowed their offense to get on the field and win the game.

The Texans had the most coverage mistakes in Week 9, highly affected by their rookies’ rough outings. The Lions’ coverage players continued to let receivers get open too often, but they were able to hold the Packers to just 9 points after winning the turnover battle in the red zone.

The San Francisco 49ers stayed put at the top while they were on bye, as no team was able to leapfrog them. The Miami Dolphins played well enough against the Bears this week to move into third place, while the Las Vegas Raiders had a below-average game, blowing their third 17-point lead of the season.

The Browns also stayed put at the bottom while they were on bye, but the Lions entered the bottom 3 for the first time this season. Their poor ability at creating perfectly covered plays against the Packers moved their average down a good amount.

Some teams’ man and zone rates will vary by opponent, while some will stay steady throughout the season. This week, the league as a whole ran man coverage 25.6% of the time, which brings the cumulative average to 28.9%, therefore running zone on 71.1% of plays. We can see how each team’s percentage of running man and zone coverage evolves each week. Here are the teams that ran the most man and zone so far this season:

Most Man Coverage this season

Most Zone Coverage this season

No changes this week in terms of the teams that run the most man and zone, but the league as a whole ran zone coverage the most often in Week 9. In fact, the Seahawks only ran one play in man coverage against the Cardinals. Although this change isn’t reflected above, the Bills ran the most man coverage of their season in Week 9 at 65%. They were a heavy zone-style defense in the beginning of the season, but the Bills recently are opting for more man schemes.

Also check out weekly Man and Zone Analysis articles coming out soon for more in-depth analyses on this and predictions based on Week 10 matchups.