In my eyes, Colin Kaepernick is an outstanding human being who sacrificed his career as an NFL quarterback to help raise awareness of the existing inequalities and inequities in his country. And for that alone, he should have a job in the NFL.

Now that NFL commissioner Roger Goodell has finally come to the same conclusion, it is time to make the on-field case for Kaepernick. So, if an NFL team signed him right now, where would he fit in the current landscape of quarterbacks? First of all, we look back to the 2017 offseason.

Kaepernick was good enough to play the 2017 season

Kaepernick’s 2016 season wasn’t good. His passing grade of 53.8 ranked 33rd among the 40 quarterbacks who dropped back to pass at least 100 times, and he added exactly zero expected points per dropback, 23rd among the same group of players.

When operating from a clean pocket — a more stable indicator of performance — his grade ranked 29th, and his EPA per play ranked 25th. However, there are some excuses to be made: He was coming off three surgeries and fighting to get back in shape, and his supporting cast was flat-out terrible.

His pass protection ranked 29th in the league, and his receiving corps might have been even worse. His No. 1 receiver — and I use this term volume-wise, not ability-wise — was Jeremy Kerley, who graded out in the 70s only once in his career. Kaepernick’s second-best option was Torrey Smith, who earned a 52.2 receiving grade in 2016 and failed to grade out higher than 65.0 in every year after leaving the Baltimore Ravens after the 2014 season. So, it’s hard to argue that Kaepernick held Smith back: Smith earned a 56.8 receiving grade in 2017 when he caught passes from Carson Wentz, who played like one of the best quarterbacks in the league that year.

Summarizing, he had the worst offensive supporting cast in the league, and it wasn’t particularly close: If we were to exclude the quarterback position from the equation and look at the remaining offensive players, no offense generated fewer wins above replacement (WAR) than the San Francisco 49ers. Only the Los Angeles Rams had comparably similar issues. 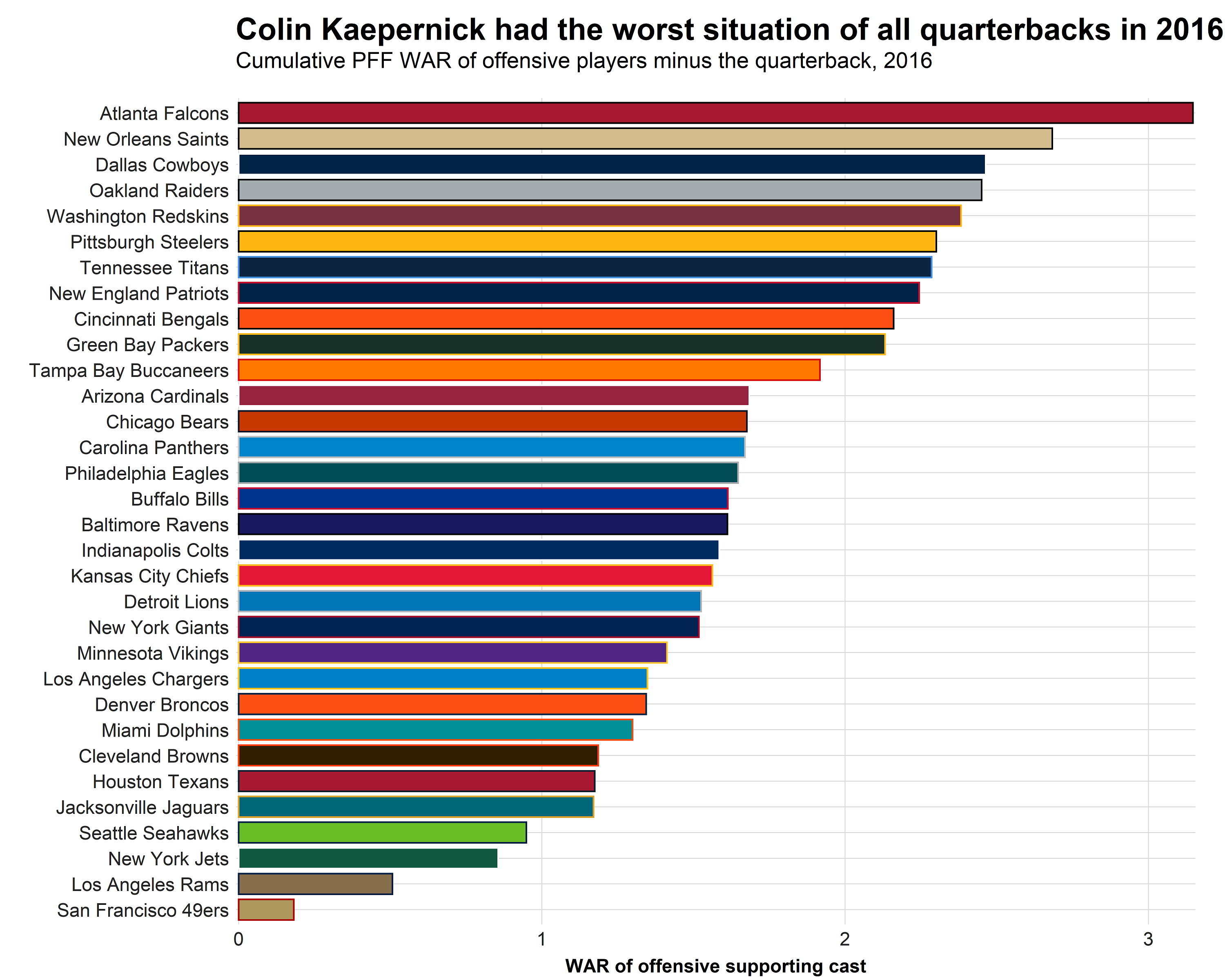 Kaepernick’s supporting cast didn’t fare significantly better than a group of replacement players. And it’s not as if the defense helped him, either, as only the defensive units of the Cleveland Browns and Indianapolis Colts generated fewer wins above replacement than the 49ers. So, his 1-10 record should not be entirely blamed on him.

Of course, it’s also apparent that he couldn’t — and most likely can’t right now — carry a team in the same way Russell Wilson can. Wilson also had an offensive supporting cast that ranked around the bottom of the league, and he still made it to the divisional round of the playoffs.

When it comes to NFL quarterbacks, seasonal variance in performance is very high, and it’s a reasonable theory that it is caused by three main ingredients:

In Kaepernick’s case, two of these three factors explain his performance in 2016. They also explain why that is very unlikely to be his true ability going forward.

We shouldn’t lean toward the other extreme and forget about his previous years in the NFL, as they, of course, matter. Luckily, we’ve already created a framework that allows us to estimate future performance based on past performance.

Applying this to NFL quarterbacks prior to the 2017 NFL season, Kaepernick would have entered the 2017 campaign as a fringe starting quarterback, ranking 25th in PFF passing grade forecast, 18th in expected points added per play forecast and 23rd in a composite forecast using a blend of both.

Most noteworthy, every quarterback who ranked higher than him went into 2017 as a starter. In other words, Kaepernick would have, at the very least, provided a team with the best backup situation in the league had he been signed.

Almost ironically, the value of a competent backup quarterback became as visible as ever that very same year. The Philadelphia Eagles famously won a Super Bowl with Nick Foles finishing what Carson Wentz started. And on the other side of the spectrum, the Green Bay Packers were apparently a competent backup quarterback away from giving Aaron Rodgers a realistic chance to reach the playoffs and get another shot at a title after coming back from a broken collarbone.

The past cannot be altered, so the more interesting question is, what would Colin Kaepernick provide for an NFL team right now? A few weeks ago, we presented our analytical quarterback rankings going into 2020, so it makes sense to look where Kaepernick would rank.

Obviously, Kaepernick hasn’t played football on a professional level for three years now, so it’s not clear whether the same skills he had going into 2017 make sense for him. We should, however, also note that our method might undersell his abilities a little bit since we are weighing the 2016 season — which might have been caused by a terrible supporting cast — significantly higher than his better seasons from 2012 through 2014.

Given that health issues likely caused his most recent poor play, resting his body for more than three years should help his physical shape. On the other hand, the mental part of the game — including a feel for the pass rush — might be an issue, which is something Matt Ryan recently stated.

While it’s very hard to give a concrete projection of how the break from football will impact his play, the major advantage of our method is that it yields a distribution of outcomes. This allows us to see just how much he would have to decline during his absence in order to not be worth a shot.

Most starters who ranked below him are very young and might deserve another shot, so it’s not necessarily a no-brainer to sign him and make him the uncontested starter. However, there are quite a few teams that should entertain signing him and letting him compete for the starting job.

Even teams with better quarterbacks would be wise to sign Kaepernick as a backup, as he also projects to be the fourth-best backup quarterback in the NFL behind only Jameis Winston, Cam Newton and Andy Dalton. This particular quartet would contain the only four backup quarterbacks who are actually above average among all NFL signal-callers.

The next most prominent backup quarterbacks for 2020 are Mitchell Trubisky (or Nick Foles, depending on who the starter is in Chicago), Jacoby Brissett and Case Keenum.

Kaepernick could change the complexion of the AFC East

While Kaepernick is, at the very least, a very good backup for almost every NFL team, some teams should let him compete to be a starter. So, which teams should sign him and let him battle for the starting job?

Signing the former 49ers signal-caller would be a net positive for a team like the Denver Broncos because Kaepernick’s median projection is higher than Drew Lock’s. However, he wouldn’t move the needle as much when it comes to winning the division: To have a chance to unseat the Kansas City Chiefs and Patrick Mahomes, the Broncos would need a major second-year jump from Lock anyway, so the higher median projection for Kaepernick isn’t that valuable in such a situation. Using concrete numbers, Drew Lock has a 6% chance to be better than Patrick Mahomes in 2020, and this chance would go up to 11% if they could choose the better option between Lock and Kaepernick.

Kaepernick could, however, make a significant impact in the AFC East, a division that is up for grabs in 2020. This is not something I expected to write at any point in my life, but Ryan Fitzpatrick currently projects to be the best quarterback in the division by a considerable margin. Additionally, the Miami Dolphins have the advantage of having a second quarterback who has a very realistic chance to become a starting quarterback in this league. Consequently, the Dolphins have by far the best quarterback situation in the division.

If the Buffalo Bills, New England Patriots or New York Jets signed Kaepernick and let him compete for the starting job, things would change drastically. If the Bills signed him and could start the better option between Kaepernick and Allen, the Dolphins would have the best quarterback in the division only 44% of the time and the Bills would have the best quarterback 34% of the time — a significant improvement.

If the Dolphins decided to sit Tua for a year for health reasons, the better option of Kaepernick and Allen would even be the favorite to be the best quarterback in the division (42% for the Allen-Kaepernick combination vs. 33% for Fitzpatrick alone).

Since the Bills have a significantly better supporting cast than the Dolphins, a quarterback situation on a similar level would be all that is needed to make them the clear-cut favorite in an otherwise wide-open division.

The following chart illustrates how the Patriots and Jets could also significantly increase their quarterback situations relative to their division foes by signing Colin Kaepernick. It’s apparent that no matter which AFC East team outside of Miami signs him, they would vastly increase their chances of having the division’s top quarterback and would have a more-than-realistic shot at winning the division and making the playoffs. 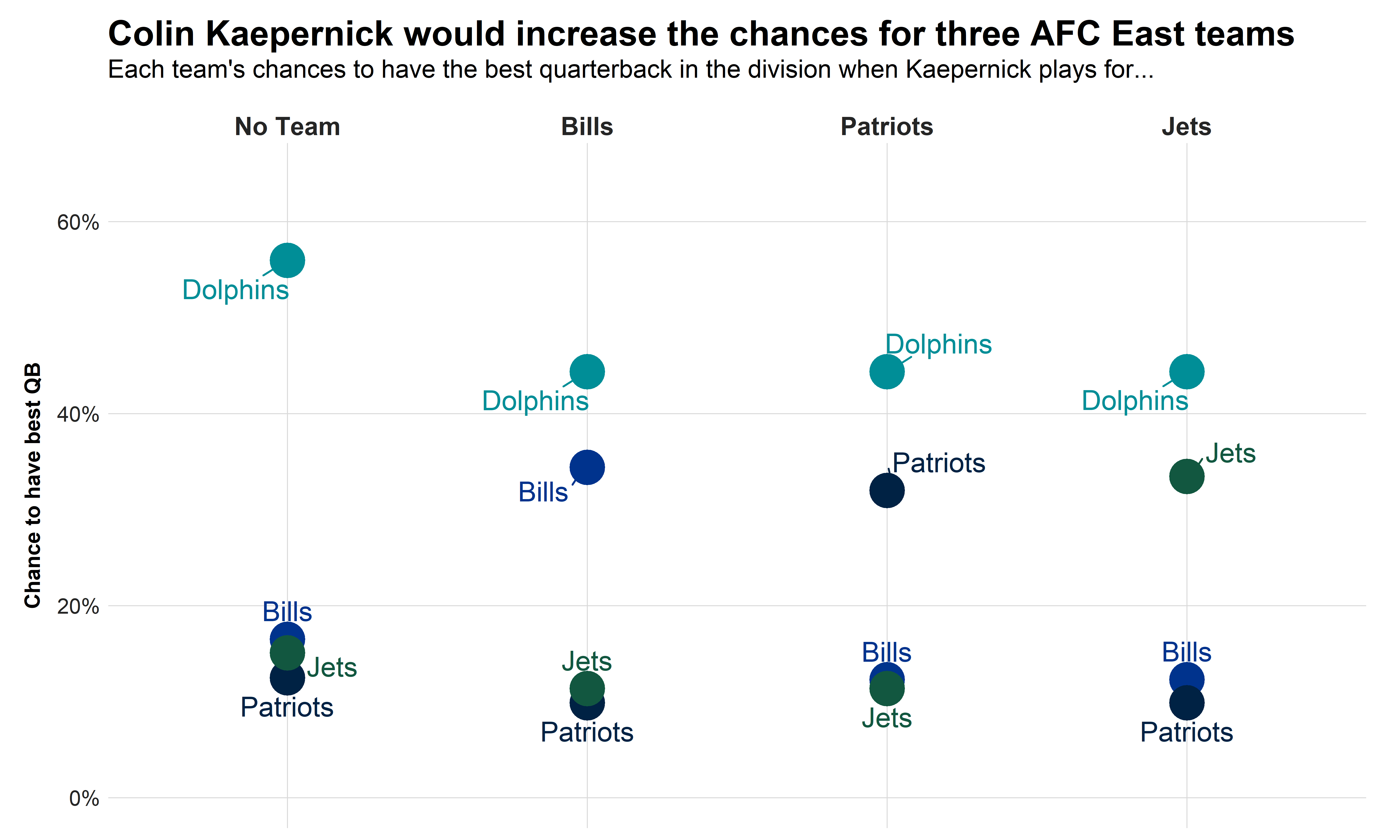 Once in the playoffs, Colin Kaepernick has already proven that he can get on a hot streak for two or three games and facilitate a deep playoff run.

We’ve learned that Colin Kaepernick is most likely still a quarterback capable of starting and winning games if given a solid supporting cast. He would provide a net positive for almost any NFL team, but he would fit best in the AFC East, where he can realistically be the division’s top quarterback.

Given that both the Jets and Bills are in danger of holding on to their young quarterbacks for too long should a Year 3 breakout fail to happen, signing an alternative who would decrease their willingness to hold on to Darnold and Allen would come in handy.

If that doesn’t happen, he makes the most sense as a premium backup for a team that is primed to compete in 2020. Teams like the San Francisco 49ers, Tampa Bay Buccaneers, Seattle Seahawks or Philadelphia Eagles would most likely be out of contention if they lost their starting quarterback to injury for a few games. Colin Kaepernick could fill in as a starting-caliber backup whose floor is additionally raised due to the threat he presents on the ground, especially with fresh legs that have been resting for three years. He could be the main ingredient to win some games even in the absence of the starter and thus keep the playoff chances and seeding as high as possible.