Repeatability is a valuable skill in fantasy football. Monster seasons from Peyton Hillis in 2011 or Danny Woodhead in 2015 were great for the fantasy owners who snagged them off the waiver wire, but for players in dynasty or keeper leagues, they ended up causing at least as many headaches in the following years as they did triumph in their winning year, and for people who bought in on their breakouts, they quickly became disappointments.

Over the next couple weeks, we’ll look at how repeatable top-flight fantasy performances are at each position and what trends have developed over recent history. Today: Running backs.

(Check the look at repeatability among quarterbacks here.) 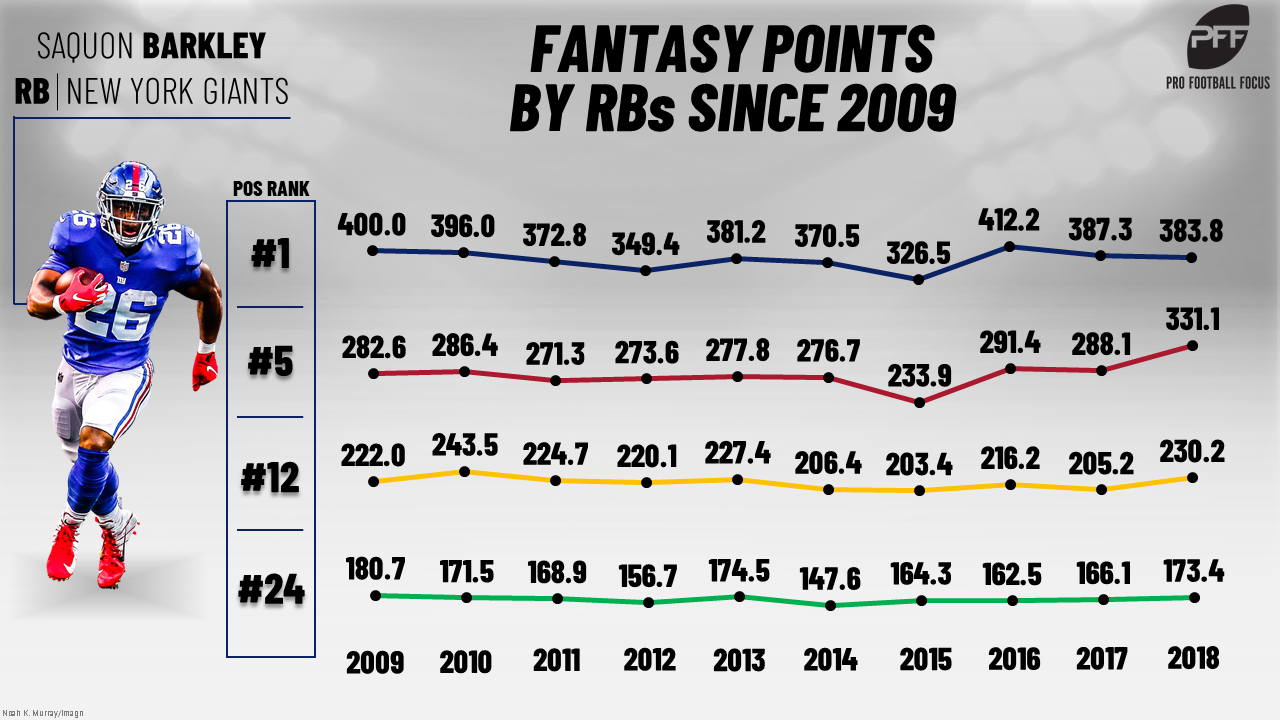 The most notable change has been on a smaller sample than that. In 2018, Ezekiel Elliott was the No. 5 back and put up 331.1 points, the most of any No. 5 back in a decade. Kareem Hunt was No. 12 with 230.2 points, the second-best No. 12. And Aaron Jones at RB24 put up 173.4, the third-best at that level. None of the numbers there is that remarkable, but we did just come off the best fantasy RB season in a while, if only by a little.

It’s not just that there hasn’t been a repeat No. 1 overall running back in almost two decade; it’s that no one has ever reached the No. 1 ever again. In the last 10 years, 10 different backs have led the league in PPR scoring. In fact, no back has even finished top-two in consecutive years, and only Adrian Peterson (second in 2009 and 2015; first in 2012) and Le’Veon Bell (first in 2014; second in 2017) have even had more than one top-two year in a decade.

That’s not scientific, so this next point is mostly for fun. But if you assume that no back with a top-two season on his resume is likely to finish in those slots in 2019, then our reasonable candidates for RBs 1 and 2 are limited to Alvin Kamara, James Conner, Melvin Gordon, and Joe Mixon. Again, not scientific, just an observation.

It’s possible I was naïve when I started this, but there I had two notable takeaways from the repeatability research: First, running back on the whole has historically been a remarkably consistent position. And second, that consistency has broken down lately (but only slightly).

The upshot of this is that we have established trends of how many repeaters to expect by end-of-season ranking each year, but recent seasons are breaking those trends down. Whatever the average of the last 10 years is (I can help there; 4.7 top-12 repeaters and 11.8 top-24), you should expect that number to be lower right now. 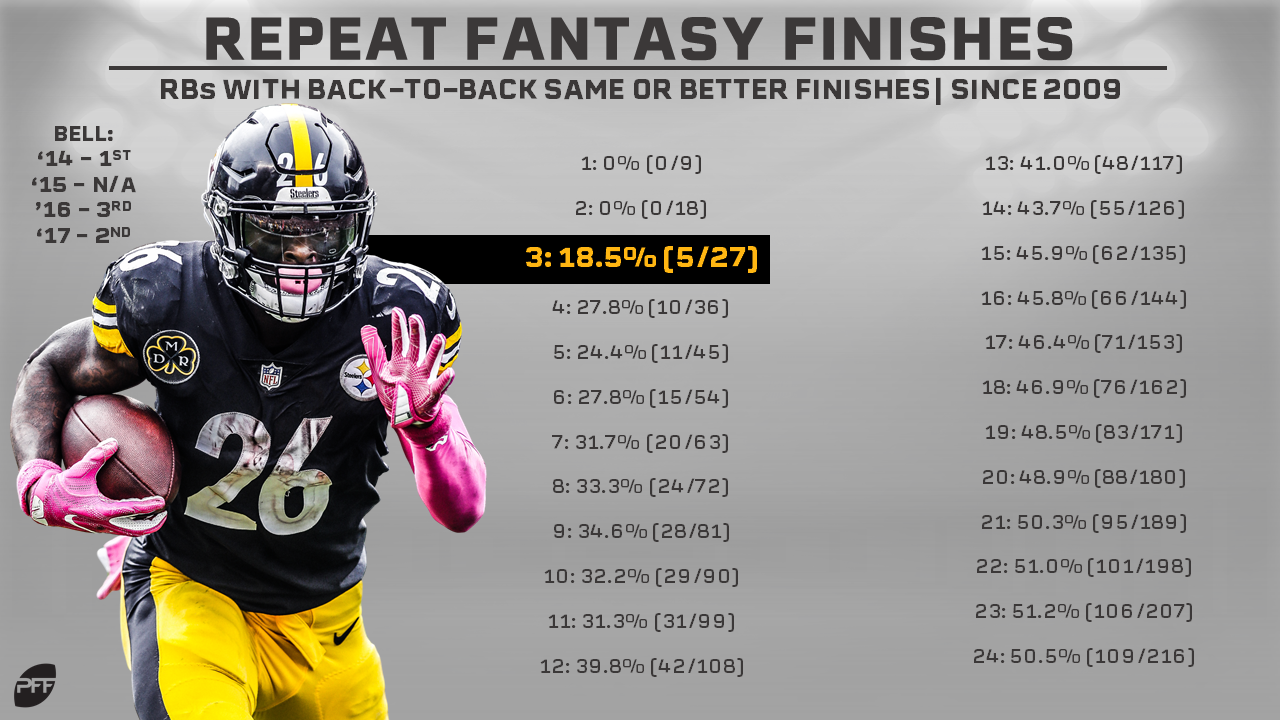 Even if the top-24 has an analogue to the top-12 at quarterback, though, it’s not very exciting. It includes, for example, Javorius Allen’s 2017 and Roy Helu’s 2011. They had value, but nobody’s building their season around a savvy waiver pickup of Roy Helu. Pull it back to the top-12 — the backs who really make or break you — and the number drops a bit, though perhaps not as much as you’d guess. About two-fifths (43 of 108, 39.8%) of top-12 backs repeat the next year — though that list includes Matt Forte six times and several other names 3-4 times each. In other words, once a player has finished in the top-12 a couple times, his chances of doing it a third or a fourth are pretty good. But a player who has only appeared in the top-12 one time is something of a crapshoot to return to the ranks the next year.

For this sort of exercise, you always have to assume a reasonable amount of health, which is a dicey proposition at every position, but none moreso than running back. The truth is that at least some of the players who were top-12 backs in 2018 won’t be in 2019 because of injury, and guessing at that is just silly.

But absent that, we can take a shot at identifying the risers and fallers. We should expect around five (at most) of the top-12 names in 2018 to be in the top-12 again in 2019. And whereas we started at quarterback by identifying the sure things to come back, at running back it’s probably better to identify the names who are unlikely to return.

Those are the only three names we can with any confidence cross off the list (and you could argue against Cohen’s inclusion there). That leaves nine names from 2018 who, absent injury, appear to be strong plays to make it again: Saquon Barkley, Christian McCaffrey, Todd Gurley, Alvin Kamara, Ezekiel Elliott, James Conner, Melvin Gordon, David Johnson, and Joe Mixon.

Force me to winnow that down to five, and I’ll struggle to end up with Barkley, McCaffrey, Kamara, Elliott, and Johnson. Gurley has Darrell Henderson to deal with; Conner has Jaylen Samuels and Benny Snell; Gordon has Austin Ekeler; and Mixon was the lowest of this group in 2018. None of those is an excellent argument against them making it back, but it’s the best we have.

The lesson here? Be careful at running back. The players who make it into the upper echelon at the position in consecutive years generally make sense, but the ones who don’t are often impossible to predict.