Repeatability is a valuable skill in fantasy football. Monster seasons from Andy Dalton in 2013 or Alex Smith in 2017 were great for the fantasy owners who snagged them off the waiver wire, but for players in dynasty or keeper leagues, they ended up causing at least as many headaches in the following years as they did triumph in their winning year, and for people who bought in on their breakouts, they quickly became disappointments.

Over the next couple weeks, we’ll look at how repeatable top-flight fantasy performances are at each position and what trends have developed over recent history. Today: Quarterbacks. 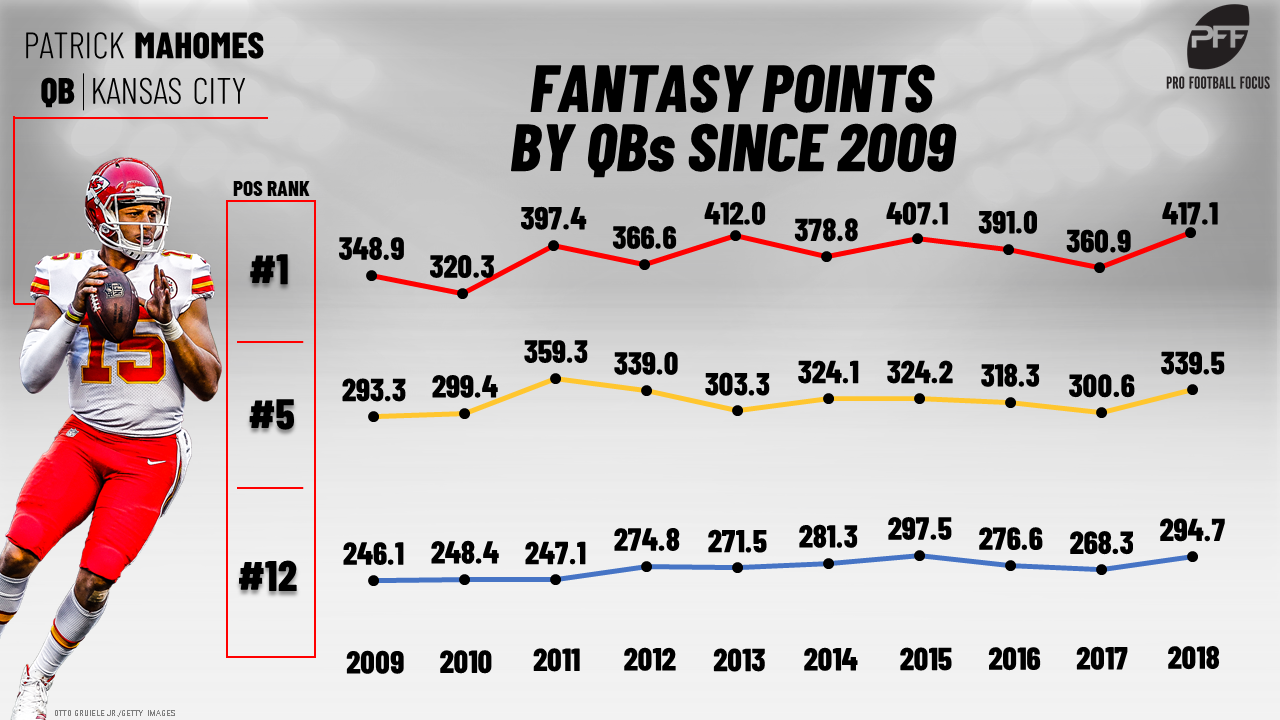 It’s at the bottom of the starting QBs that things have really changed. The QB12 averaged 257.6 points in 2009-2013, including three seasons under 250 points and a high mark of 274.8. In the more recent five years? The average has jumped 26 points, to 283.7, without a single season under 268.3. Put another way: Rank the overall QB1 seasons in the last decade, and the numbers bounce around in our sample pretty consistently. Rank the QB12 seasons in that time, and the top four and five of the top seven are from the last five years.

In the last 10 years, there have been eight different quarterbacks finish as the QB1. The only repeat names: Aaron Rodgers in 2009 and 2016 and Drew Brees (the only back-to-back name) in 2011 and 2012. That means that we have seven different QB1s over the last seven years.

Patrick Mahomes is the heavy favorite to finish 2019 as the No. 1 fantasy quarterback. And his if-healthy floor is probably no worse than QB5. But no one should act terribly surprised if someone else does end up over Mahomes for the top spot.

As the quarterback position has gotten deeper (last year’s QB12 would have been QB5 in 2009; the QB12 in 2009 would have been QB18 in 2018), there has logically been more turnover at the various slots. From 2009 to 2013, at least two quarterbacks repeated as a top-five fantasy performer each year, averaging 2.4 repeaters per year. Since then, only two quarterbacks total have repeated in the top-five — Russell Wilson in 2014-15 and Kirk Cousins in 2016-2017.

Similarly, the number of top-12 fantasy quarterbacks has dropped off as well. At least seven quarterbacks repeated as top-12 options in 2009-2013, averaging 7.4 a year. We’ve only seen seven repeaters once time since, averaging 5.5 repeat top-12 finishers from year to year.

What does this mean? Well, the short answer is that there is a better chance of a quarterback rising to the upper echelon of the ranks right now than at any time in recent history. In other words: We say it all the time, but late-round QB is the way to go.

Obviously, the deeper you go into the rankings, the easier it is for a player to repeat from year to year. That is borne out at quarterback in recent seasons: 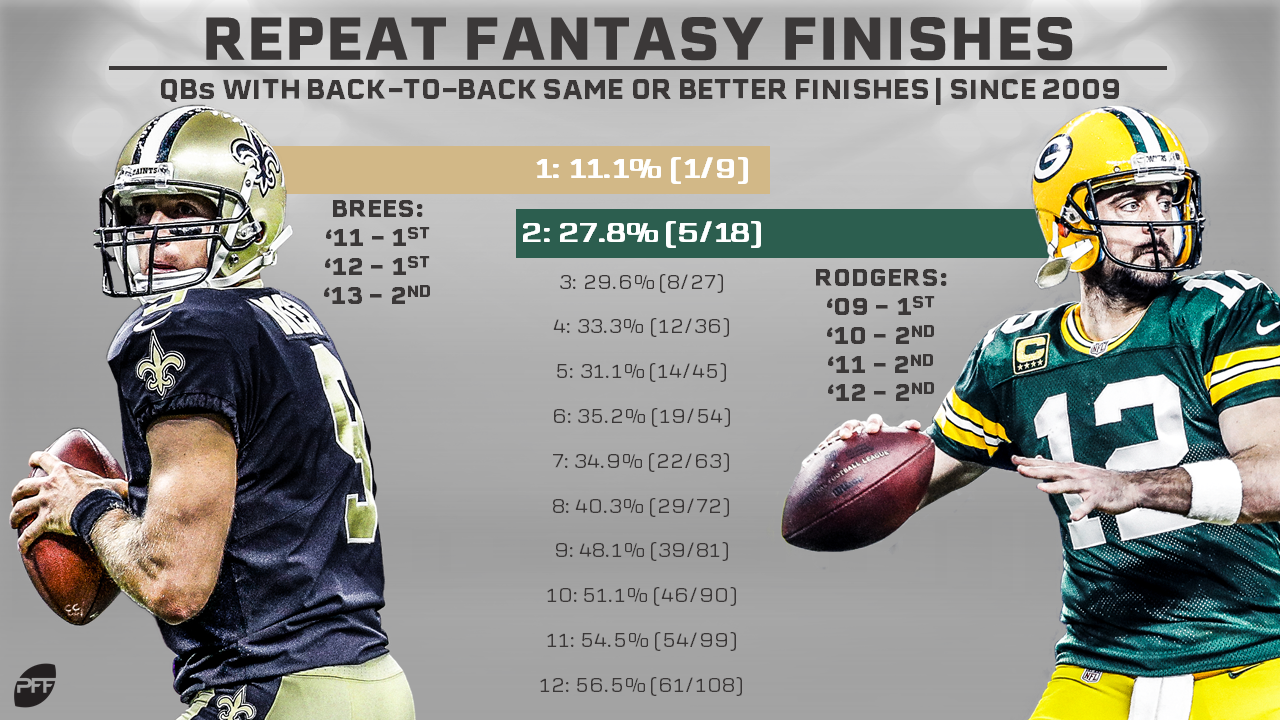 Things obviously get better further down the list. About a third (35.2%) of the quarterbacks who finish top-six do so again the next year — once again, that’s a Drew Brees-heavy list, as he makes up seven of the 19 player-names on the list. Once you get through the top-12, it’s just over a 50/50 repeatability proposition — 61 of 108 (56.5%) players with a top-12 finish since 2009 have done so again the next year.

Who will the repeaters be?

If we’re looking for 6-7 names to repeat in the top-12 in 2019, the first thing to do is divide them into the sure things and question marks (assuming health, as always).

That’s four names. So we have 3-4 names to identify from the other eight: Matt Ryan, Ben Roethlisberger, Jared Goff, Drew Brees, Russell Wilson, Dak Prescott, Kirk Cousins, Tom Brady. The odds start with Goff, Brees, and Wilson, with Ryan and Prescott the next two.

Is this conclusive? Obviously not. There’s no magic formula that says we can’t have the exact same top-12 list in 2019 as we did in 2018 (but man, that would be weird). But history tells us that the best we can reasonably hope for is seven repeaters in 2019, and the most recent history says even that might be optimistic.

So when drafting for 2019, or when deciding on quarterbacks to hold onto from last year to this, don’t put too much stock into a top-12 finisher. As deep as quarterback is, the odds of a quarterback who didn’t finish top-12 the season before making the list the next year are almost as good as one who did. In short: You can wait on quarterback. This is yet another way of showing it.