What we learned in the preseason for fantasy, NFC edition

With three weeks of preseason action in the books, it’s time to take stock of the most pressing fantasy storylines for each team across the league. In case you missed it, yesterday I rounded up the top takeaways from each AFC team here. Today, we’ll check in on each NFC squad.

An 0-3 preseason record with a point differential of -39 has only served to intensify buzz about a Super Bowl hangover for Eagles faithful, especially with the starting unit responsible for zero points. However, it’s tough to take away all that much from an offense sans Carson Wentz, Alshon Jeffery, Jay Ajayi, Nelson Agholor, Jason Peters, and a host of other contributors. Still, there is legitimate concern at the quarterback position with Super Bowl MVP Nick Foles struggling and MVP candidate Wentz not yet cleared for full contact (Wentz is nine months removed from knee surgery). With Jeffery reportedly targeting a Week 3 return from offseason shoulder surgery, Ajayi could be looking at a heavy workload in the early going. Look for Dallas Goedert to be deployed in enough 12 personnel to make a fantasy impact.

In one handoff, Saquon Barkley’s first pro carry justified all the hype that has surrounded him since the draft. A subsequent hamstring injury kept him out of action for the bulk of preseason, although Barkley has since returned to work and confirmed he’ll be fine for Week 1. A supremely skilled receiver, Barkley has settled in as a mid-first-round pick in drafts this summer. While Odell Beckham Jr. was busy getting signed, sealed, and delivered, teammate Sterling Shepard continued to build his rapport with Eli Manning and looks destined to outperform his ADP as the WR45. Shepard has hauled in 10-of-11 targets for 114 yards this preseason, averaging a healthy 2.53 yards per route.

The Cowboys’ vaunted offensive line has been shuffled around quite a bit due to a rash of injuries, and for those who own Ezekiel Elliott, the health of that unit is a chief cause for concern entering the season. As for who will replace Dez Bryant, a shared effort is expected, although rookie Michael Gallup has looked the part of a potential No. 1 option. Gallup was PFF’s top-graded collegiate WR last season and led the nation in targets against press coverage. He and Dak Prescott have connected early and often throughout camp, including some deep completions.

The transition from Kirk Cousins to Alex Smith has somewhat taken a backseat to the unsettled backfield situation in the wake of Derrius Guice’s season-ending injury. Adrian Peterson looks to have a leg up on Rob Kelley and Samaje Perine at the moment, although Chris Thompson remains the back to own in PPR (RB26 in our staff rankings). Peterson (3.4 YPC), Kelley (3.1) and Perine (3.4) all failed to impress last season. Smith wasn’t asked to do a whole lot this preseason, although his 82.8 adjusted completion rate on 29 aimed throws certainly looks encouraging. The top deep passer in the game in 2017, Smith will be one of the more attractive weekly streaming options.

More was probably made recently about Latavius Murray and Dalvin Cook possibly splitting the workload than should have been. Nevertheless, it threw a wrinkle into Cook’s fantasy stock as he’s best viewed as an upside RB2 (RB11) than an anchor. Still, this is a guy who averaged 21 touches in his first four career starts and was a top-eight fantasy RB in that span. Kirk Cousins’ 62.1 PFF grade this preseason suggests he’s still got plenty of work to do to fine-tune things with his plethora of receiving weapons.

Interestingly, Kenny Golladay has been working opposite Marvin Jones Jr. in two-receiver sets. In a span of about two weeks, Kerryon Johnson went from a late-first-round pick in rookie drafts to a defensible top-three pick. Johnson burst onto the scene with impressive run after impressive run in his Lions’ debut (not including a 57-yarder negated by penalty) and has forced six missed tackles on 20 touches this preseason to earn PFF’s top rushing grade (86.4). With that said, new Lions coach Matt Patricia may deploy a committee at least to start the season – he is, after all, a Bill Belichick disciple. Reading between the tea leaves, Ameer Abdullah’s extensive fourth-quarter action suggests he’s on the roster bubble and/or being showcased.

Aaron Jones may well be the most talented RB in Green Bay, but his injury struggles and two-game suspension to start the season may just open the door enough for Jamaal Williams to grab hold of the lead gig and never look back. Head coach Mike McCarthy has talked up Williams at every stop, as the second-year back provides nice value for “Zero RB” drafters with his seventh-round ADP outside the top-30 RBs. Also providing solid late-round value is Geronimo Allison, who is penciled in for starter’s snaps with Aaron Rodgers. 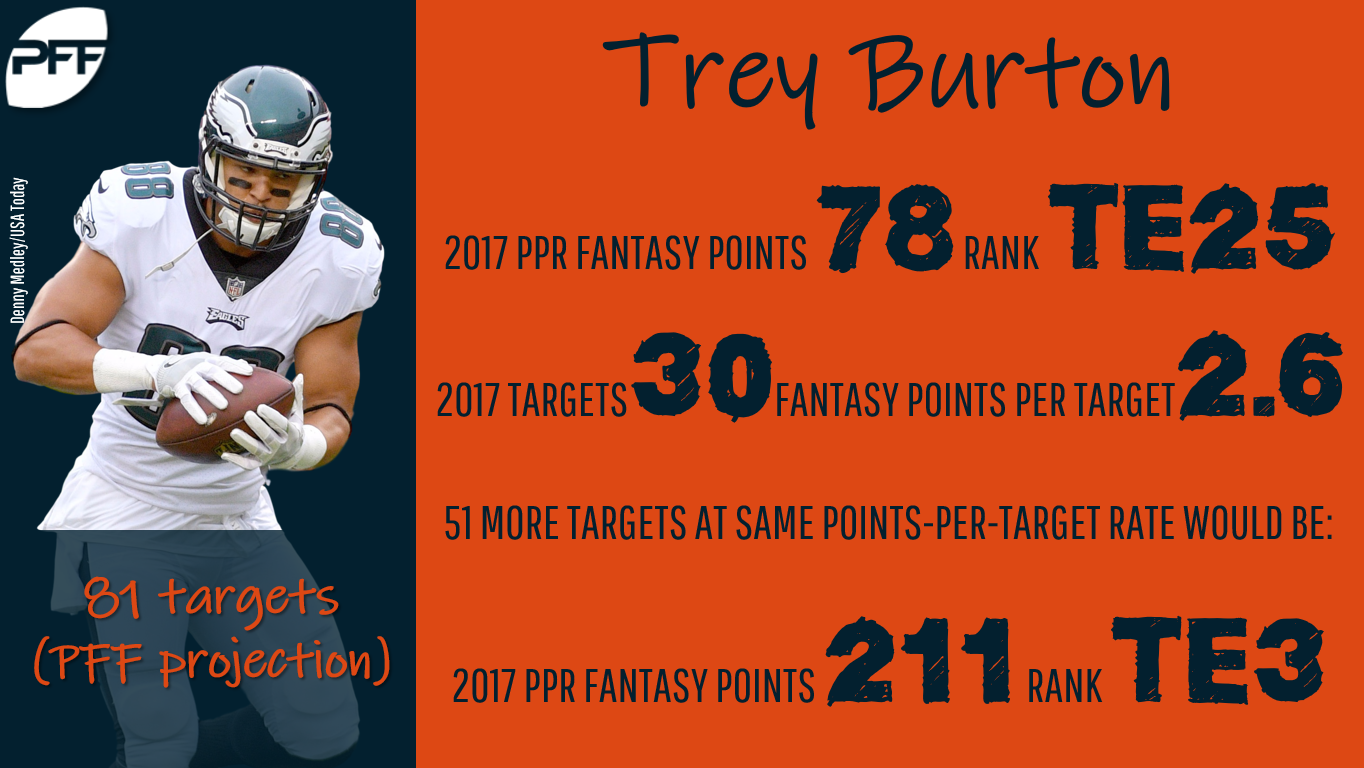 The Bears offense is a trendy unit under innovative new coach Matt Nagy, a former Arena League QB who falls from the Andy Reid coaching tree. Under John Fox, Chicago finished 29th in points and 30th in yards last season. Mitchell Trubisky, the No. 2 overall pick in 2017, has some new toys in Allen Robinson and Trey Burton. Our projection tool has Burton slated for 81 targets (and TE11 in fantasy). That feels like a conservative estimate given Adam Shaheen’s foot injury that could land him on IR. And while Taylor Gabriel is listed as a starter, I’m not so sure he fends off a (finally) healthy Kevin White. As for Jordan Howard and his supposed three-down role, we’re left to take Nagy at his word.

Cameron Meredith might not be long for the Saints’ offense after struggling throughout the preseason. It’s not often a good thing to see “quite a bit of work” in the final preseason game, especially not with impressive rookie Tre’Quan Smith sporting a 139.4 passer rating when targeted and looking like an ideal late-round dart throw. Drew Brees is coming off his lowest touchdown percentage in a decade and won’t have Mark Ingram for the first quarter of the season.

It seemed like textbook “coachspeak” a few weeks ago when Norv Turner and Ron Rivera were talking about Christian McCaffrey having a realistic shot at 30 touches per game. But after three weeks of McCaffrey getting the bell-cow treatment and looking like an absolute beast with 6.24 yards after contact, it’s no longer a laughing matter. Rookie D.J. Moore was the first wideout selected in April’s draft and is our staff’s consensus top-ranked rookie WR. But as the likely fourth passing option in the Panthers’ pecking order, he’s outside our projected top-50 WRs.

Calvin Ridley graded out well in his second preseason outing, but then struggled with a couple more drops in Week 3. Mohamed Sanu will begin the season opposite Julio Jones as the team’s No. 2 option, a role that will draw plenty of single coverage. Devonta Freeman sat out the whole preseason while recovering from MCL and PCL sprains. Freeman’s ADP as a borderline RB1 feels a bit steep considering he’s enjoyed only a 60-40 snap split over Tevin Coleman when both backs are healthy. 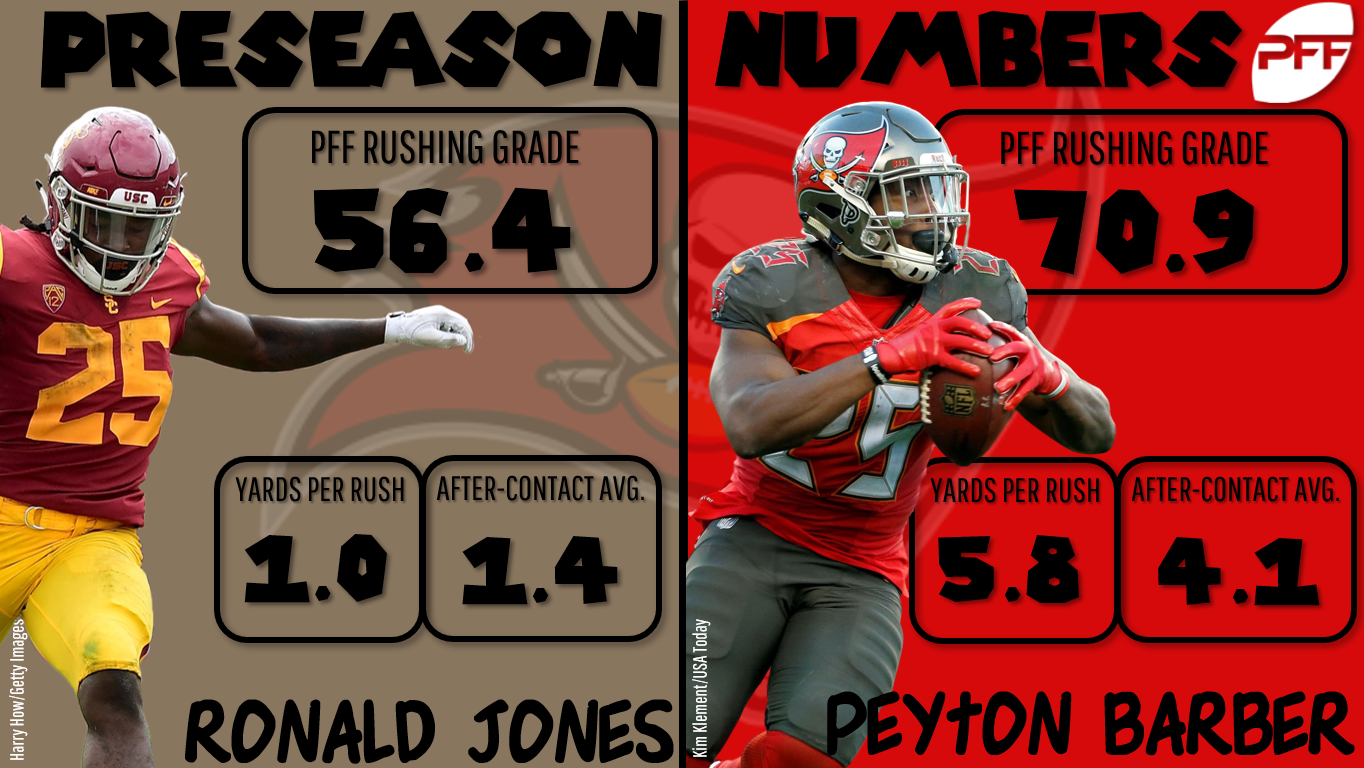 Could Chris Godwin become the 1B receiving option to Mike Evans’ 1A? That’s been the buzz all summer from beat writers and observers at Bucs’ camp, and on the field as he’s caught 7-of-8 targets with two TDs, including one over All-Pro corner Darius Slay. Coming off a top-12 finish in yards per route run last season (min. 50 targets), Godwin’s play has led to more reps from the slot for DeSean Jackson. In the backfield, Peyton Barber has effectively held off second-round rookie Ronald Jones.

For those who loaded up on Doug Baldwin value shares in MFL10s, this week’s news that he’s playing at 80-85 percent and expects to manage his knee all season is certainly not encouraging. Still, we’re looking at a potentially massive target share for a player who has finished inside the top-15 PPR receivers each of the last three years. And for those who loaded up on Rashaad Penny shares in best ball, starter Chris Carson extends his apologies. Offensive line coach Mike Solari will try to do what Tom Cable couldn’t and get all those early draft picks finally working in cohesion.

Jared Goff spent a chunk of the offseason developing timing with new weapon Brandin Cooks, but it’s hard seeing his fantasy value increasing in the move from New England to Los Angeles, where Robert Woods was more successful in a similar role last year. Todd Gurley owners with a spare roster spot may want to scoop up backup John Kelly, who ran for 64 yards and two TDs on 15 carries this past weekend. Kelly is built similarly to former University of Tennessee teammate Alvin Kamara and improved his PFF grade each year in college.

Is Jimmy Garoppolo a QB1 in fantasy? With only last year’s sample size and some preseason play, our staff views Garoppolo as more of a fantasy backup (QB13) than the public (QB10 ADP). Still, there’s no denying his rapport with Marquise Goodwin as his primary target. Tight end George Kittle recently returned to practice after being sidelined since the preseason opener with a separated shoulder, which aided his draft value for savvy owners. Jerick McKinnon (calf) has begun working his way back to practice, and all indications remain he’ll be ready for the opener. Alfred Morris has vaulted into the No. 2 RB conversation due to his strong play and missed time by Matt Breida.

David Johnson being back healthy is the main takeaway here, but the Cardinals have a few intriguing fantasy options elsewhere. Christian Kirk has logged 88.4 percent of his snaps from the slot this season. That’s interesting, partly because Kirk was a second-round pick and two-time first-team All-SEC, and partly because 62 percent of Larry Fitzgerald’s snaps last year were from the slot. Could Fitzgerald line up out on the perimeter more often this season? It wouldn’t be ideal for a player with his top-end speed, but something has to give. Perhaps Ricky Seals-Jones winds up grabbing a bulk of the Cardinals’ available targets after running with the first team all camp. As for the QB situation, it’s a matter of when, not if, we see Josh Rosen under center this season.