• Get your popcorn ready: The Chiefs, Dolphins and Raiders are best set up to create explosive pass plays this week.

• Feeling the heat: The Vikings and Titans profile as the two offenses expected to face the most pressure in Week 16.

• Open lanes all day: The Ravens, Bills and Eagles stand out as the top three offenses in combined rushing yards before contact per carry.

The NFL is a matchup-driven league. Offensive coordinators are always looking to scheme their playmakers into one-on-one situations against a defender, while defensive coordinators will attempt to do anything in their power to upset the timing and rhythm of the opposing signal-caller.

Big plays make the football world go 'round. Matchups between explosive offenses and leaky defenses are exactly what we’re looking for when compiling game stacks in DFS or when betting an over. 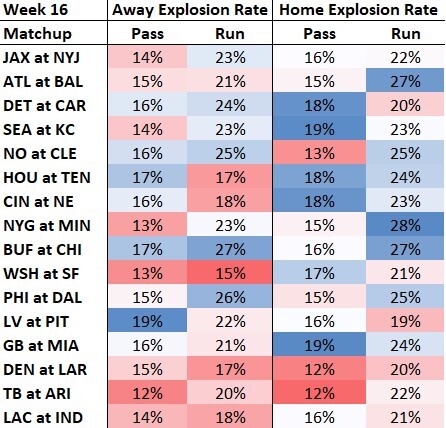 Minshew Mania: Eagles QB Gardner Minshew will officially start in place of Jalen Hurts (shoulder) in Saturday’s contest against the Cowboys. Minshew is one of the NFL’s few backup quarterbacks with a decent track record of fantasy success. The 26-year-old signal-caller managed to throw for multiple touchdowns in both of his starts for the Eagles last season, returning QB10 and QB18 fantasy finishes for his efforts.

And yet, have you seen the weather forecast for roughly half of the NFL this week? Minshew deserves to be considered one of the week’s top waiver wire additions by potentially stepping into the single-most complete offense in the NFL. Overall, nobody has a higher combined PFF grade than the Eagles (80.4) when looking at rushing, receiving, pass- and run-blocking grades independent of passing grade.

Here’s to hoping Hurts heals up quickly, but if not, the Eagles are still in pretty good hands for the short term.

Malik time in Tennessee? NFL Network’s Tom Pelissero reported that Ryan Tannehill (ankles) is facing an “uphill battle” to suit up Sunday against the Texans. His absence would lead to rookie Malik Willis getting the start against the Texans’ (surprisingly) top-five defense in fantasy points per game allowed to opposing quarterbacks. Willis started against the Texans back in Week 8 and was asked to pass the ball only 10 total times. His 5-12-0 and 8-40-0 rushing lines in two starts weren’t nearly enough to make up for his status as a complete zero in the passing game; nobody other than Derrick Henry is a recommended start in the fantasy semis.

Meat on the bone: The following nine players had more than 70 unrealized air yards in Week 15, meaning they had a ton of downfield opportunities but failed to capitalize on them for one reason or another:

Not every passing attack is meant to fly: The clear-cut bottom six offenses in terms of expected failure in creating big plays through the air: Cardinals, Buccaneers, Commanders, Giants, Browns and Rams.