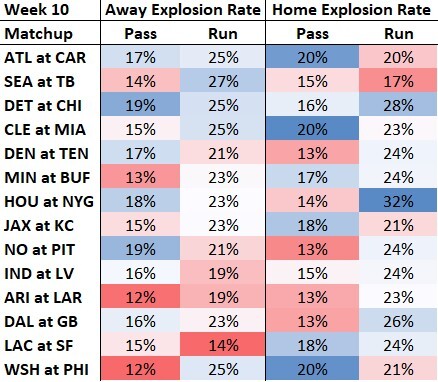 Arm strength is overrated: At least when Tyreek Hill is so far behind the defense anyway that he has time to come back and make the catch. I agree with the general sentiment that Tua Tagovailoa has left a lot of meat on the bone when it comes to getting the ball to his speedy playmakers deep downfield; just realize it hasn’t stopped the third-year signal-caller from working as one of the game’s most efficient deep-ball passers.

This isn’t to suggest that Hill and Jaylen Waddle have caught each and every one of Tua’s downfield ducks. There was a particularly egregious misfire at the end of Week 9 that should have resulted in a 77-yard score for the latter speedster:

Waddle should still be running pic.twitter.com/3kR9d7TSOq

Style points be damned: This passing game continues to function as anyone’s idea of a top-five unit and at times looks downright unstoppable. Don’t be surprised if that deep ball continues to produce more good than bad against a Browns secondary that has been rather brutal defending exactly that:

Rookie of the year?: The following leaderboard denotes the most yards per route run among rookie wide receivers with at least 50 targets since 2015:

Olave has only finished worse than the PPR WR22 on one occasion since Week 2. Michael Thomas (foot, IR) is done for the season, and it’s unclear when Jarvis Landry (ankle) might be back.

Further helping matters is that this Bears defense has been fairly brutal against slot wide receivers. Overall, Chicago has posted bottom-eight marks in yards per attempt (10.3), explosive pass-play rate (24.5%) and passer rating allowed (118.9) to wide receivers aligned out of the slot this season.

Fire up ARSB as a top-10 wide receiver ahead of Sunday’s smash spot. Rookie Bears nickelback Kyler Gordon might have a bright future but through nine weeks he grades out as PFF’s 13th-worst cornerback in coverage among 126 qualified defensive backs.