The 2018 preseason is shaping up to have its fair share of training camp battles for us to watch. We’ve already reviewed the quarterback and running back positions; today we’ll shift our focus to some of the more intriguing wide receiver training camp battles to keep an eye on. For this particular position, I’ll be focusing on the more fantasy-friendly wide receiver corps of intrigue. While a few of you would like to know whether it’s Andre Holmes or Jeremy Kerley catching balls as the potential WR3 in Buffalo, I’m going to cater this article to the more pass-friendly offenses that can hopefully produce relevant fantasy gems. Let’s break down some of the most intriguing battles to watch during training camp and leading into the preseason.

The Cowboys enter this season with a wide receiver group surrounded by question marks. Dez Bryant, Brice Butler and Ryan Switzer were shown the door. Newcomers Allen Hurns, Deonte Thompson and third-rounder Michael Gallup were brought in to help the next era of Dallas wide receivers.

Hurns is three years removed from his sole 1,000-yard season, but has playmaking ability both in the slot and on the outside to become the Cowboys’ top wideout this year. I bring up that 1,000-yard season because it’s the one where he’s run the fewest amount of routes from the slot over the past three years.

My biggest takeaway from this table is that Hurns can win anywhere on the field and has experience lining up all over the formation. He’s been the most talked about wide receiver through minicamp, but the team has mixed up first-team reps with everyone on the team trying to find the right combinations. Hurns is the first receiver being drafted (ADP of WR42), falling right in line with our projections (WR46).

Gallup was our No. 1 graded wide receiver at PFF throughout the NFL draft process. He showcased sublime ability running the route tree and finished the past two seasons top 10 in yards per route run among this year’s draft class. Gallup looked like an unofficial “winner” from minicamp after developing a strong rapport with Dak Prescott and could be a darkhorse candidate to take over the top receiving duties.

Terrance Williams has had a tumultuous offseason, but the coaching staff remains enamored with his downfield blocking. It wouldn’t be surprising to see his snaps go down as Gallup’s increase. Cole Beasley could see more snaps with Switzer out of the picture, but is nothing more than a bye-week fringe play at best. Cedrick Wilson and Noah Brown will be fighting for what is likely the final wide receiver spot, but neither should be on your fantasy radar. 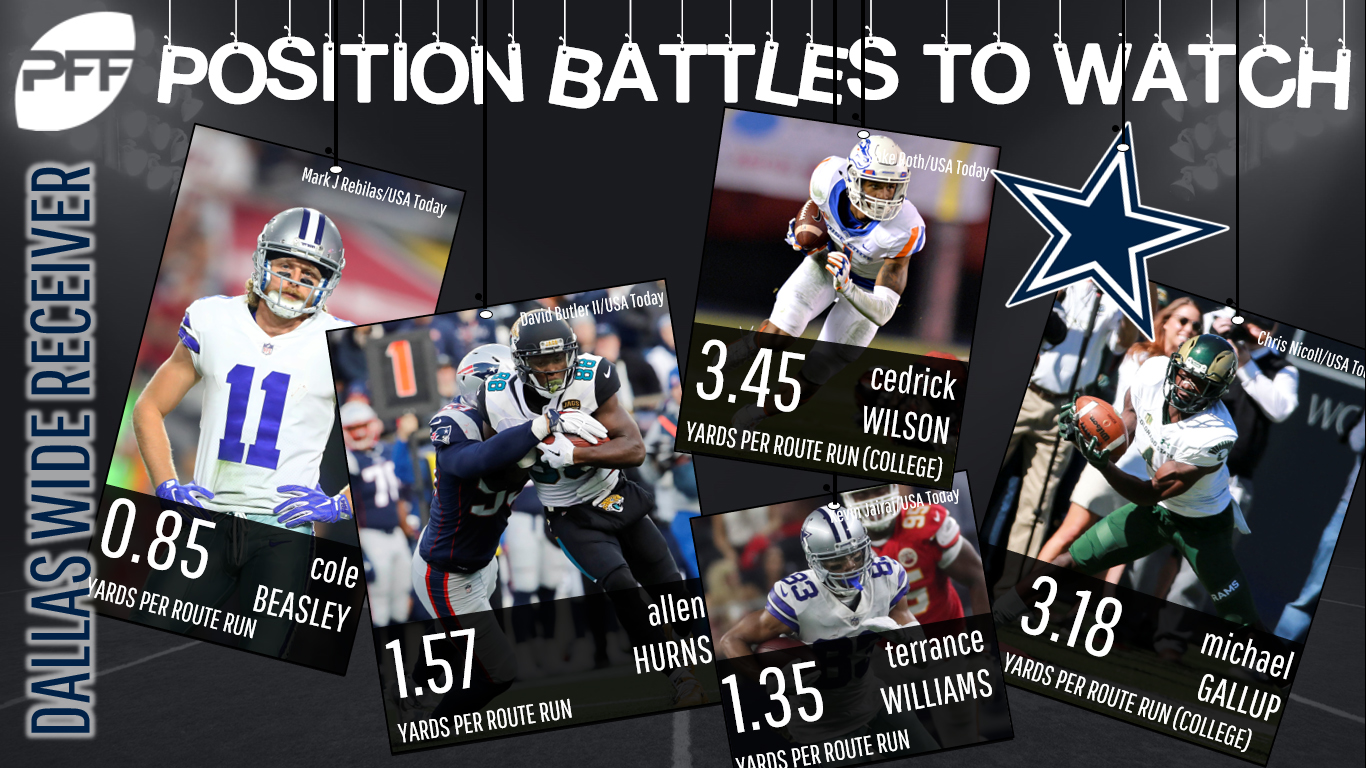 Hilton is locked in for the Colts’ top receiver duties, but behind him there’s major question marks to how the receiver depth chart plays out. The early favorites for the No. 2 and No. 3 spot are by veterans Chester Rogers and Ryan Grant. Rogers is entering his third year with the Colts but has yet to make much of an impact. He’s never surpassed 25 receptions in a season and has had a tough time getting on the field due to injuries and a crowded depth chart. Grant has spent most of his time flashing during preseason games for Washington prior to a mini breakout in his fourth season (45-573-4). Those totals from last year are more than Rogers has in his entire career.

While neither of these players are overly impressive from a physical or metric-based viewpoint, we should still keep an eye on this battle. Luck has supported two top-36 wide receivers in two of his full four seasons playing. Hilton could see another receiver join him in fantasy relevance this year if either Rogers or Grant firmly supplants a grasp on that WR2 role.

Reece Fountain and Deon Cain are two rookies that are also looking to make an impact right away. Both have seen some reps with the first team in minicamp. Fountain is a fifth-round pick that did not receive a combine invite and Cain is a Clemson product that still needs some fine-tuning to his game. Cain has stood out early in camp making notable touchdown receptions and impressing head coach Frank Reich. Both players are ones we should be keeping an eye on in preseason.

The Cardinals offense saw several receivers leave for greener pastures this offseason. They currently have a whopping 243 targets vacated from last year and will need somebody besides Larry Fitzgerald to inherit some of those.

Fitzgerald has routinely dominated a sizeable target share of this passing attack. He’s averaged 152 targets over the last three years, and despite his age (34), can reasonably be penciled in for a similar output in 2018. David Johnson will surely see quite a bit of that workload, but how will it shake out among the rest of the receivers?

Second-round rookie Christian Kirk has the draft capital to warrant snaps and playing time, but his best playing position overlaps Fitzgerald – in the slot. Kirk was fourth receptions (67) and third in receiving yards (891) among all collegiate receivers from the slot last year. He could start out his career on the outside and later shift inside when Fitzgerald hangs up his cleats, ala Nelson Agholor. The coaching staff is already enamored with the rookie

Sophomore receiver Chad Williams was a third rounder last year but didn’t see much playing time after spending most of the season in former head coach Bruce Arian’s dog house. He’s reportedly been working on both the physical and mental aspects of his game and has been turning heads at practice. Brice Butler signed a two-year deal and checks all the boxes terms of ideal size and speed. Former Arians recently said Cardinals fans are going to love this kid with his ability to take the top off a defense. Incumbent J.J. Nelson also won’t be sitting idly in this competition, believing he can develop into the total package in this offense and not just a deep threat.

No one is excluded in this competition. There’s little clarity to offer analyzing this team because they themselves don’t know yet. Head coach Steve Wilks says it’s a wide open competition for the No. 2 position and I’m taking him at his word. This will be an interesting battle to monitor considering how many targets are available.

The Patriots wide receiver corps is one that we’ll need to see shake out before we can take too much action. Luckily, the top two wide receiver targets – Chris Hogan and Julian Edelman – are currently locked into their roles, but there’s still some questions entering training camp.

Edelman’s four-game suspension opens the door for a potential opportunity for someone to emerge. Jordan Matthews is coming off the heels of a disappointing injury-riddled campaign with Buffalo, but prior to that, looked like an emerging star for the Philadelphia Eagles. Matthews’ success came via running the large majority of his routes from the slot. He will present a bigger target for Tom Brady (6-foot-3, 213 pounds) over the middle than he has been accustomed to with Edelman and Danny Amendola. If Edelman were to face any additional setbacks or re-aggravate his ACL, Matthews could emerge as a late-round fantasy goldmine and should be labeled as one of this year’s post-hype sleepers.

Malcolm Mitchell is still in the fold as a player that could see regular snaps on the perimeter this year. He missed all of last year (knee) and has continued to be held out of offseason workouts. He may join training camp in limited fashion to start, but if he’s healthy, he could have an important role this season running intermediate routes (10.6 aDOT in 2016).

The Patriots have a plethora of receivers on their depth chart. Kenny Britt, Phillip Dorsett, Cordarrelle Patterson, Braxton Berrios, Riley McCarron and Matthew Slater (special teams) all fighting for roster spots. In his last full five seasons played, Brady has averaged 4,525 passing yards and 32 passing touchdowns. Identifying which receivers are pulling ahead in training camp could prove to be a worthwhile venture considering just how prolific this passing attack has been with Brady under center.