If Thursday night’s 12-game slate was a bit overwhelming for you, Friday’s two-gamer should provide quite the respite to allow you to get back to basics and build some winning lineups for daily fantasy football.

Despite being just a two-game slate, it presents a rather interesting one for us to dissect with the Lions and Raiders sharing joint practices this week in Napa. Below is a rundown of the top plays for the Friday slate. 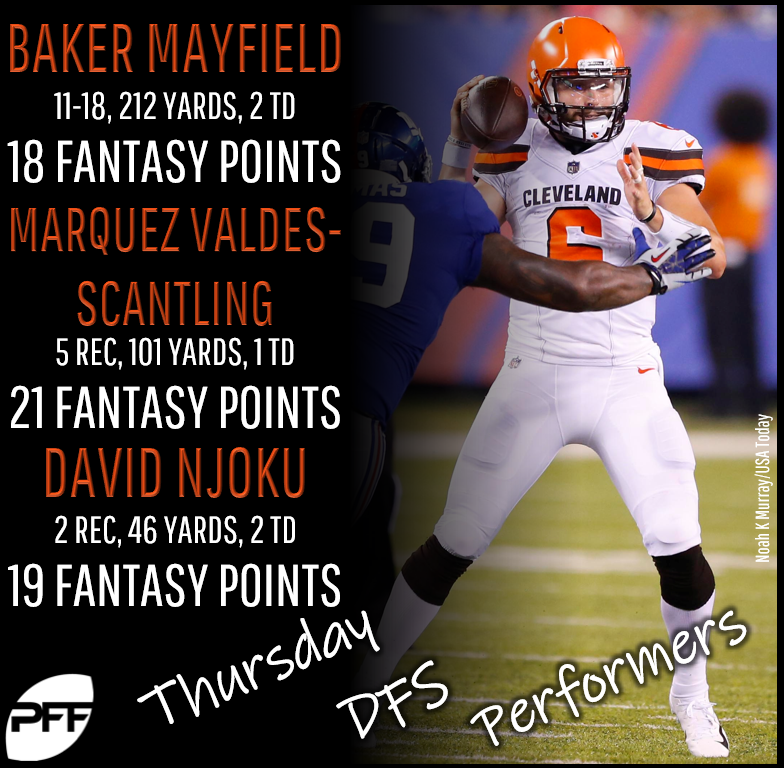 If Todd Bowles follows last year’s outline with his quarterback play, we can expect the starters to play a series or two, and then Sam Darnold taking over for at least two quarters. The No. 3 overall draft pick is loaded with upside, but it remains to be seen if that can translate over to the NFL. Darnold was an aggressive gunslinger at USC and it will be interesting to see how well he can perform in OC Jeremy Bates’ quick-game passing concepts in a West Coast offense. Given their offensive line woes, the faster Darnold can get the ball out the better. Teddy Bridgewater will get some work in too (a quarter-plus), but the team seems eager to see Darnold get some live reps.

Jake Rudock was sublime last preseason for the Lions, completing 66.1 percent of his dropbacks and throwing three touchdowns and just one interception. The Lions have given both Rudock and Matt Cassel reps with the second-team offense so far in training camp. They’ll let them duke it out during preseason games for the QB2 title, and I’d imagine they let the 25-year-old Rudock get more playing time (and film) than the 36-year-old this Friday.

Dan Quinn expects to roll out all four of his quarterbacks, beginning with Matt Ryan and the starters taking on a series or two. The team also knows what it has in Matt Schaub (No. 2 QB), leaving most of the reps up to Garrett Grayson and Kurt Benkert. Benkert is an UDFA with intriguing arm talent that has been impressive in camp. The Falcons are expected to enter the season with just two quarterbacks, and Benkert’s a dark-horse candidate to replace Schaub (and save the club $4.5M in the process).

Jets rookie Trenton Cannon has had a great training camp. He figures to get a lot of run due to all the injuries on the depth chart. His 4.45 speed could allow him to take any touch to the house and should be a popular play on this slate.

Devonta Freeman and Tevin Coleman are locked into their roles, but there’s an open competition for the No. 3 role. Ito Smith was dealing with a foot injury at the start of camp. He will get a chance to showcase his skills tonight as a do-it-all back that the Falcons selected in the fourth round. He’ll be battling camp body Terrence Magee and two undrafted rookie free agents. It’s speculative, but the more tape the team gets on Smith, the more confidence they can have in him being a potential replacement for Coleman down the line in 2019.

Rookie Chris Warren made a habit of bulldozing defenders during his time at Texas.

Among the 300+ FBS RBs with at least 60 carries last season, #Raiders‘ Chris Warren ranked 11th in percentage of carries he stayed up through first contact (38.57). #Lions LB Jarrad Davis found that out the hard way, it seems. https://t.co/9d6ewMTCk7

The veterans ahead of him are all but locked into their respective places in the depth chart. Warren will see a good amount of run beginning tonight as they try to figure out if they want to carry him on their 53-man roster this year.

Marcell Ateman, a seventh-round pick out of Oklahoma State, has been getting consistent buzz during training camp. At 6-5, 216 pounds, Ateman is a big-bodied receiver that has impressed coaches and should get a long look on Friday. At the other side of the size spectrum, Ryan Switzer has been equally impressive working out of the slot and has been a reliable receiver when targeted. Switzer looks for a lock for the WR5 position with Ateman contending for WR6.

ArDarius Stewart’s recent two-game suspension could give Chad Hansen more playing time. Technically, Stewart can play during the preseason, but it will be up to the coaching staff how much they run him out there. Hansen spent the time between the end of minicamp and the start of training camp practicing with Darnold in Southern California. Coming off the heels of a quiet rookie season, Hansen could use a big preseason to secure a top-five or top-six spot in the wide receiver rotation.

Head coach Dan Quinn is reportedly more interested in seeing playing time from the rookies and first-year guys than seasoned vets. Russell Gage and Reggie Davis are the two guys who fit the bill and have piqued my interest in playing time tonight. Gage was a sixth-round pick this year out of LSU and Davis possesses 4.41 speed and was a preseason standout for the Falcons last year.

UDFA Teo Redding has looked rather impressive in joint practices with the Raiders according to beat reporters. The Lions are looking to lock up depth behind WR4 TJ Jones and Redding could be a candidate to secure that role with his kick return versatility and receiving prowess. He’s been impressive every step of the way so far in camp and could check off another box with a strong performance in tonight’s game.

Atlanta’s Eric Saubert has been turning heads in camp. The team brought in Logan Paulsen to be their blocking tight end, with hopes of Saubert being another pass-catching tight end for them to utilize. Saubert is on the short list of tight ends to lock in.

Christopher Herndon has been impressing Jets coaches with his hands and speed so far in camp. Fighting a crowded yet unspectacular depth chart, Herndon could emerge as the favorite to win the position with a strong preseason.