Leverage PFF’s NFL Super Bowl 56 fantasy football rankings and DFS ownership projections as close to lock as possible. Knowing what your competitors are going to do ahead of time provides an edge that simply not enough DFS gamers take advantage of. Focus your attention in cash formats on high-rostered value players and pivot to lower-rostered ceiling players in GPPs.

Last week’s process led to pinpointing Tee Higgins as a screaming value in addition to Odell Beckham Jr. as a player on the rise.

Editor's Note: that players’ names will appear twice on the charts because the DraftKings Showdown format has a normal salary and captain salary (1.5x) for every player. Be sure to also check out Kevin Cole’s Super Bowl 56 DFS single-game breakdown as an additional reference.

The Cincinnati Bengals-Los Angeles Rams Super Bowl 56 matchup shouldn't be an overly high scoring based on each team’s pace of play the last six weeks. The Bengals have played slower — 61 plays per game (20th) — than the Rams — 65 plays per game (12th).

The Bengals need to be pushed by the Rams — as they should — to hit their ceiling projections based on their slower pace of play. 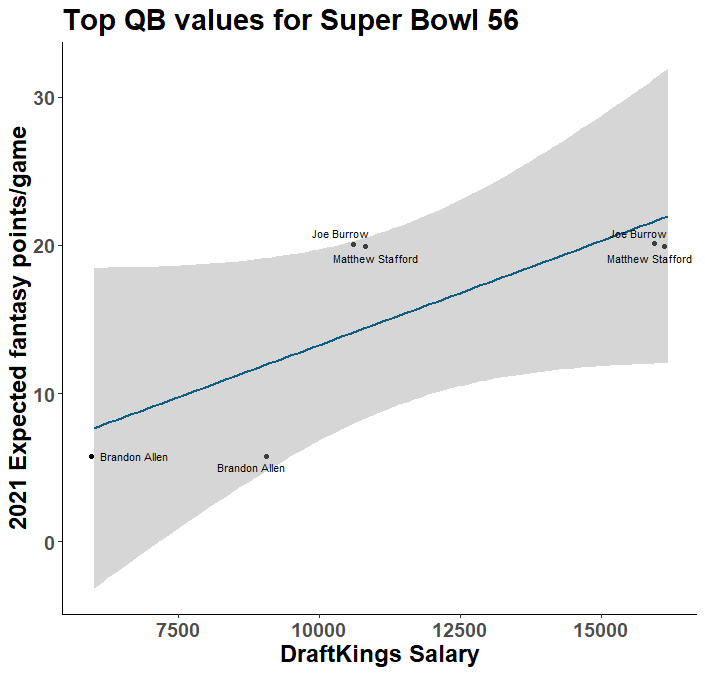 Therefore, showdown lineups should be built more around Rams players than Bengals to capture a shootout outcome. Conversely, lineups built with hopes that this game is more low-scoring would gravitate toward more Cincinnati players. Case in point, Cincinnati’s games have finished under the closing projected total in all their playoff wins.

It’s difficult to choose between Joe Burrow ($10,600) and Matthew Stafford ($10,800) if you apply a one-quarterback in the FLEX leverage strategy in DraftKings Showdown format. The two quarterbacks are neck-and-neck in expected fantasy points per game over the last six weeks, and each has favorable matchups against the opposing team's defensive coverage scheme.

Still, I side with Stafford if I choose to roster one because he is much less likely to be harassed by the Bengals’ 21st-ranked pass rush. Meanwhile, Burrow has a massive OL/DL disadvantage against PFF’s highest-graded pass rush.

Talking heads will merely shrug their shoulders at the Rams’ fierce defensive line while citing Burrow’s ability to overcome his bad offensive line all season. However, that analysis is eerily similar to what happened with Patrick Mahomes behind a broken offensive line in Super Bowl 55.

It’s hardly far-fetched to imagine Burrow under duress all game long. It would also align with inevitable regression that should come Burrow’s way — no quarterback has scored more fantasy points versus expectation than Burrow in the last six weeks, as his 363 passing yards per game should be much closer to his expected 254 passing yards per game.

There’s also the question of how aggressive Bengals head coach Zac Taylor will be throwing the football because of the uphill battle the Bengals will be facing in the trenches. He could opt to run the ball more on first down, as he did versus the Kansas City Chiefs, which would limit Burrow’s opportunities to throw. Cincinnati ran the ball on 59% of first-down plays, which is why I lean toward taking the under on Burrow’s 36.5 passing attempts prop on PrizePicks.

There is a surplus of scenarios where Burrow falls flat for fantasy based on coaching design and defensive pressure, which gives me more confidence in Stafford. I imagine the market rostership will also be pretty flat on the two quarterbacks. Their projections in the props market are virtually identical across the board. 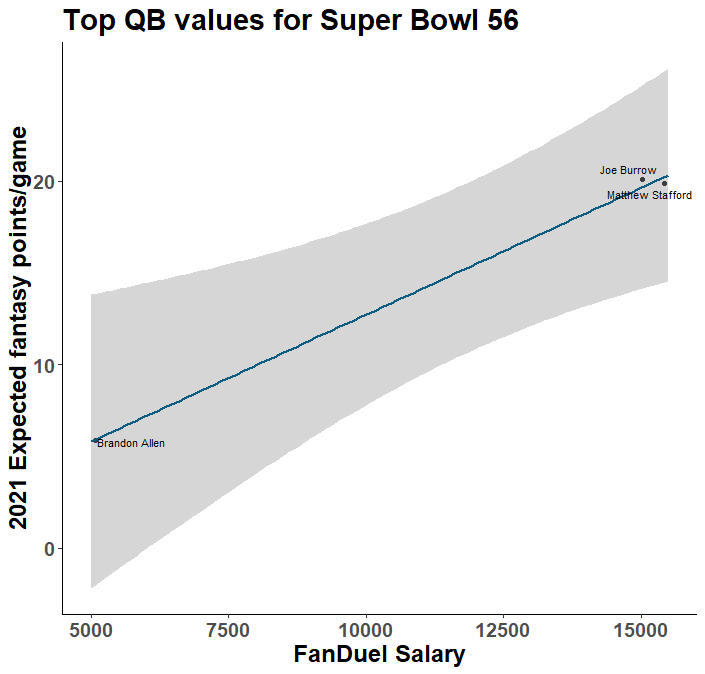 Fading Burrow dovetails nicely into jamming Joe Mixon ($9,600) into all DraftKings lineups. Operating as a true workhorse, Mixon has averaged 21 touches and 18.7 expected fantasy points since Week 14. His locked-and-loaded volume is unmatched on the slate, which provides a reason to roster him as a FLEX and in the captain slot.

The Bengals running back’s 15% target share and 56% route participation over the last four weeks also ensures that he will be involved in the offense regardless of the game script. The vast majority of Mixon’s targets (62%) have come on first down.

His rushing touchdown equity also correlates negatively against your DFS opponents that play Burrow in their lineups.