Week 8's slate of games came and went, with plenty of standout offensive performances to feature. The usual suspects made their presence felt in addition to some new names and big bounce-back candidates. 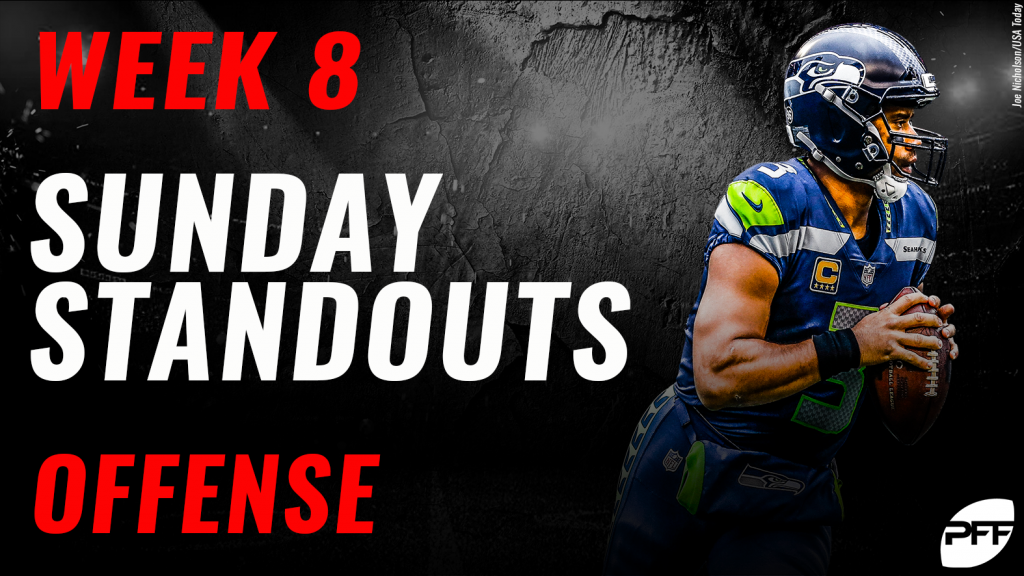 Seahawks offensive coordinator Brian Schottenheimer has put a focus on the running game in Seattle, and it was behind a ground-first attack that Wilson put forth a very efficient outing on Sunday. On just 17 pass attempts, Wilson recorded a perfect 158.3 passer rating and a league-high 14.6 yards per attempt. He took three deep shots on the day, completing all three of his pass attempts that traveled 20 or more yards in the air for 96 yards and a touchdown to Tyler Lockett.

Key signature stat: Posted a passer rating of 136.7 on throws that took 2.5 seconds or less

The Tampa Bay Buccaneers fired their defensive coordinator, Mike Smith, prior to Week 8, but their defense still had trouble containing the Bengals passing attack. Dalton excelled when getting rid of the ball quickly on Sunday, and on plays where he got the ball out in 2.5 seconds or less, he had a 73.7% completion percentage along with both of his touchdowns on the day. On longer-developing plays, he went just 7-for-14, and his yards per attempt fell from 9.2 to 7.6.

Doyle took the field for the first time since Week 2, and he returned to his productive role in the offense for Andrew Luck. Doyle was the only tight end in the NFL this week with over five receptions and no drops, as he turned his six catchable targets into six catches for 70 yards. Per usual, Luck looked to get the ball to Doyle on short routes with his average depth of target coming in at 5.0 yards. Five of his six receptions came within nine yards of the line of scrimmage, yet he averaged over 11 yards per reception.

Tyler Boyd’s breakout campaign as a key part of the Bengal’s offensive attack continued on Sunday in their win over the Buccaneers. Boyd continues to come up big when Dalton needs him most – on third down and when Dalton is facing pressure. Boyd was targeted twice on third down against the Bucs, and he converted both plays for first downs. He now has 14 first down conversions as a receiver on third down which is behind only Adam Thielen.

Matthews wasn’t necessarily expected to make major contributions to the Eagles’ offense, but he did just that on Sunday. Matthews was targeted on a quarter of his 20 routes run and brought in all four of his catchable targets for 93 receiving yards.

The change to Byron Leftwich at offensive coordinator seemed to be a welcome sight for Fitzgerald, as the Cardinals’ wideout had his best performance of the season. In the first seven weeks of the season, the veteran pass-catcher saw just three of his 43 targets come 20 or more yards downfield. However, this week, Fitzgerald saw four targets at least 20 yards downfield. He caught all three of his catchable deep looks for 70 yards and a touchdown.

Ramczyk has been having a terrific season on the Saints’ offensive line. That did not change against a talented Minnesota Vikings’ defensive front, as Ramczyk did not allow a single pressure in 24 pass-blocking snaps. He has now allowed just four pressures on the season, and his pressure rate allowed of 1.6% leads all offensive tackles in 2018. To go along with that, Ramczyk had another solid game clearing the way for the Saints’ rushing attack.