Each week in this space, we’ll be taking a look back at Sunday’s games to find five of the most interesting or most important stats for fantasy football owners. With 15 of 16 games from NFL Week 14 in the books, here are the five stats you need to know:

Considering Tannehill’s prior career average was just 7.0 yards per attempt, it’s hard to make sense of this impressive turnaround. What’s changed? Could it be as simple as no longer having Adam Gase calling his plays? Or, could it be Tennessee’s offensive line, which has kept Tannehill clean on 72% of his dropbacks (tied for second-most)? Tannehill’s prior-career-average was just 64%, and, once upon a time, Tannehill was the league’s most pressure-sensitive quarterback.

Really, I’m not sure what’s behind Tannehill’s resurgence, but I do know he needs to be started as a mid- to low-end QB1 until further notice. His next two games both come at home against Houston (Week 15) and New Orleans (Week 16). Houston ranks fourth (25.5) and New Orleans ranks ninth (23.6) in fantasy points per game allowed to opposing quarterbacks.

In other words, Brown ranks top-three in every efficiency metric I find meaningful for a fantasy wide receiver. Though impressive, this is not shocking — Brown was my favorite wide receiver prospect of the 2019 class, posting historically great numbers in some of our metrics, including depth-adjusted yards per target.

If you own Brown in dynasty, congratulations. He already looks every bit the part of a true NFL WR1 and a potential future superstar.

If you own him in season-long, his prospects are slightly less rosy, but he could still be a viable contributor for you in the fantasy playoffs. As outlined above, Tannehill is on fire, and Brown clearly appears to be his favorite and most productive target. Furthermore, rookie wide receivers do tend to breakout in the second half of the season.

Perhaps it’s just a natural and what-should-have-been expected regression to the mean. Throughout NFL history, there are over 900 instances of a running back totaling at least 100 carries in a single season. Within that sample, Kamara’s 2017 season ranks best (1.59) and his 2018 season ranks fifth-best (1.29) in fantasy points per touch. That’s insanely impressive but also glaringly unsustainable – unless we think Kamara is easily the greatest running back of all time, he’s probably a massive longshot to come close to posting his third-consecutive top-0.1% season in a row. This year he averages 0.90 fantasy points per touch, which is a solid number (12th-best of 38 qualifiers) but not one of the best numbers ever.

4. On Sunday, Austin Ekeler totaled 101 rushing yards on just eight carries. Through the air, he totaled 112 receiving yards on just four catches (five targets). This was the first time in NFL history a player posted a 100/100 game on fewer than 15 touches.

Ekeler now leads all running backs in fantasy points per touch (1.44). Remember our stat from our last section? This ranks second-best by any running back in any season all-time (of 900-plus qualifiers), behind only Kamara’s 2017 season (1.59) and just ahead of Marshall Faulk’s 2000 season (1.36). 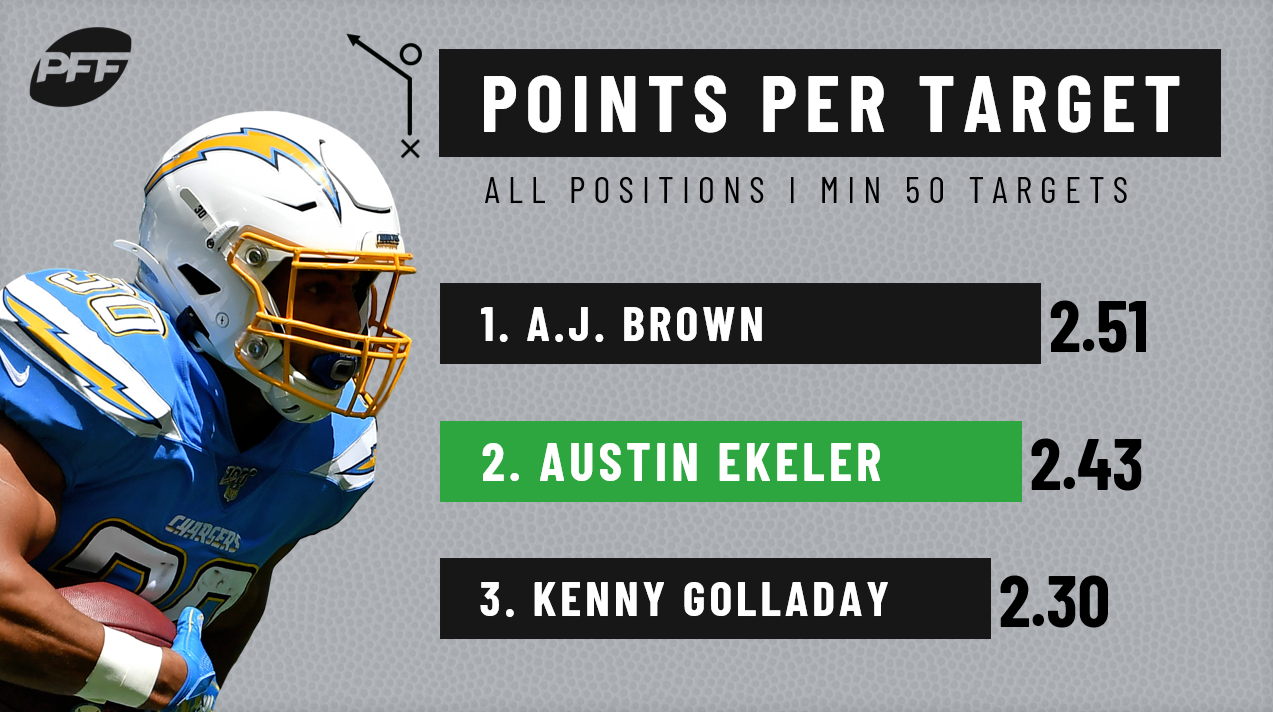 Among all 107 receivers with at least 50 targets this year, Ekeler ranks second in receiving points per target (2.46), behind only A.J. Brown. That’s quite easily the most by any running back in any season in NFL history.

I’m not here to argue that Los Angeles should be starting Ekeler over Gordon, though I do think that’s the case. I’m here to remind you Gordon probably won’t be playing for Los Angeles next year. And, before Gordon returned in Week 5, Ekeler averaged 26.8 fantasy points per game, which would rank tied with Lamar Jackson for second-most among all players.

By dynasty ADP, he ranks just 26th among running backs. Ekeler’s talent, efficiency, and upside are all well established. He’s only 24 years old. And, the incumbent starter is due to hit free agency. In other words, his dynasty ADP is very dumb.

By DraftKings scoring (where there’s a 300-yard bonus and interceptions are only worth negative-1), Winston ranks fourth in fantasy points, averaging 23.2 per game.

If you’re a Winston owner, you just need to accept the good with the bad and be thankful turnovers and sacks aren’t as damaging as they are in fantasy football as they are in real-football.

However, that might not matter much anymore. Winston has arguably the best postseason schedule of any quarterback, facing Detroit, Houston, and Atlanta over his next three games. All three defenses rank bottom-seven in opposing passer rating, fantasy points allowed per game, and fantasy points allowed per dropback. Perhaps most importantly, Detroit (Week 15) and Houston (Week 16) both rank bottom-four in interception percentage.