In 2017, I introduced a new statistic for wide receivers – depth-adjusted yards per target over expectation – in an effort to spot underrated values for fantasy. Although this metric might be a mouthful, it is fairly straightforward.

Not all targets are created equal. The more yards in the air behind a pass, the more yards we should expect a receiver to gain from that pass. This statistic adjusts for the depth of target on each throw, builds out an expected number of receiving yards, and then contrasts a receiver’s actual yardage totals to his expectation. At the NFL level, this statistic proved to be better at predicting targets in the following season than standard non-adjusted yards per target.

With the NFL Draft closing in on us, I wanted to highlight the draft-eligible wide receivers who excelled in this metric at the NCAA level and might be strong values by current ADP.

PFF first began grading college players in 2014. Since then, we’ve seen 372 wide receivers record at least 150 targets in the NCAA. Of those 372 wide receivers, here are the top-12 by depth-adjusted yards per target over expectation: 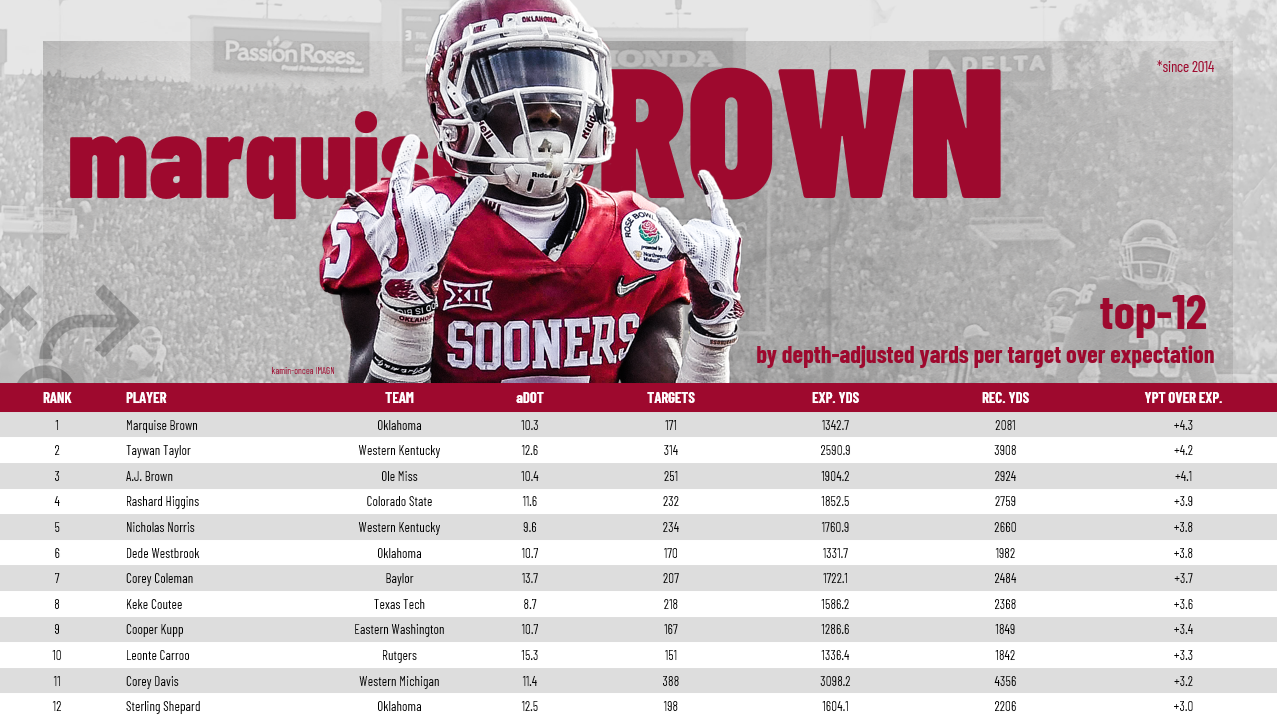 Note 1: Teams in the Power-5 conference are listed in bold.
Note 2: Cooper Kupp’s target totals prior to 2016 are incomplete due to playing in the Big Sky Conference
Note 3: Wide receivers who have not yet declared for the NFL draft have been excluded.

Although this chart might be less impressive than the chart from our last article (on yards per route run), almost all of the wide receivers on this list who have already declared are currently in the NFL (with Nicholas Norris being the lone exception).

Last year, Kupp ranked 15th in fantasy points per game, while Dede Westbrook led the Jaguars in receiving yards. Corey Davis and Corey Coleman were top-15 overall picks in the NFL Draft. Sterling Shepard was drafted in Round 2, Taywan Taylor and Leonte Carroo in Round 3, Keke Coutee in Round 4, and Rashard Higgins in Round 5.

Now, let’s turn our attention to the two draft-eligible wide receivers who made this list: Marquise Brown and A.J. Brown.

We already went in-depth on Brown’s statistical dominance and why he’s still going to be a risky pick in best ball leagues and dynasty drafts here. His ranking here, first overall, and ahead of some other notable Oklahoma wide receivers just makes him that much more enticing. Brown feels like (alongside D.K. Metcalf) one of the most boom-or-bust (for fantasy) rookie players in this class.

Among all 102 wide receivers with at least 150 targets over this span, he’s the only who ranks top-15 in yards per target (third), yards after the catch per reception (sixth), and missed tackles forced per reception (seventh).

Brown has run 77% of his routes from the slot over the past two seasons but also showed promise working outside. He was basically just as efficient outside (3.00 yards per route run) as he was from the slot (3.02) last year. After Metcalf went down with an injury, Brown averaged 128 yards per game over the last four weeks of the season, while running 98% of his routes outside.

Although he was overshadowed by Metcalf’s combine performance, Brown also posted some impressive numbers. He ran a 4.49-second 40-yard-dash at 226 pounds, which gives him a 91st percentile speed score. He didn’t run the three-cone at the combine, but was timed at 6.89 at his Pro Day. If he posted that number at the combine, it would have ranked top-10 among all wide receivers weighing over 220 pounds since 2000.

Both wide receivers seem like strong values at current dynasty ADP – listed in parentheses above. I have both higher in my dynasty rookie rankings than where they stand by current ADP. They also seem like values based on current best ball ADP: A.J. Brown (ADP: Round 16) and Marquise Brown (ADP: Round 18).

I’ll have my official rookie rankings out soon, but in the meantime, look out for the PFF Draft Guide (out now and continually updated), which is always my No. 1 resource for evaluating the incoming class of rookies for fantasy.