With another week behind us, and some more fresh stats to analyze, I’m here to help you with your toughest fantasy football start/sit decisions of the week for Week 6.

Note: If you don’t see one of your players mentioned below, please refer to our PFF Fantasy staff rankings

Allen was the highest-scoring wide receiver in fantasy before flopping in Week 4 (a 20-point blowout victory) and Week 5 (Chris Harris Jr. shadow coverage). In a dream matchup against the Steelers, expect a performance closer to what we saw from Allen through the first three weeks of the season. Or, like we saw from him against Pittsburgh last year, when, in Week 13, he caught 14 of 19 targets for 148 yards and a score.

I certainly have my reservations about Chark, and I don’t think he keeps up this pace all year, but, still, he ranks fifth among all wide receivers in fantasy points per game (21.1). After such a ridiculous start, there’s no way you can keep him on your bench. And this week’s matchup is also more favorable than not, with Marshon Lattimore unlikely to shadow, and with the Saints ranking bottom-10 in deep passing efficiency for the second-consecutive season.

Ingram isn’t as valuable as his numbers imply — he’s touchdown-or-bust, playing on just 53% of the team’s snaps and without much involvement in the passing game. Still, he needs be viewed as a low-end RB1 this week. The Bengals rank worst in schedule-adjusted fantasy points per game to opposing running backs, and fourth-worst in yards allowed per carry (5.10).

In Weeks 3-4, Johnson ranked fourth in XFP per game (19.8), after averaging 10.0 XFP per game through the first two weeks of the season. He also jumped from 53% to 75% in positional XFP market share over this span. With C.J. Anderson off the team, Johnson has become a true workhorse, with RB1-upside. Coming off of his bye this week, he gets a Green Bay Packers defense that (mostly due to scheme) has given up the third-most fantasy points per game to opposing running backs (31.6). 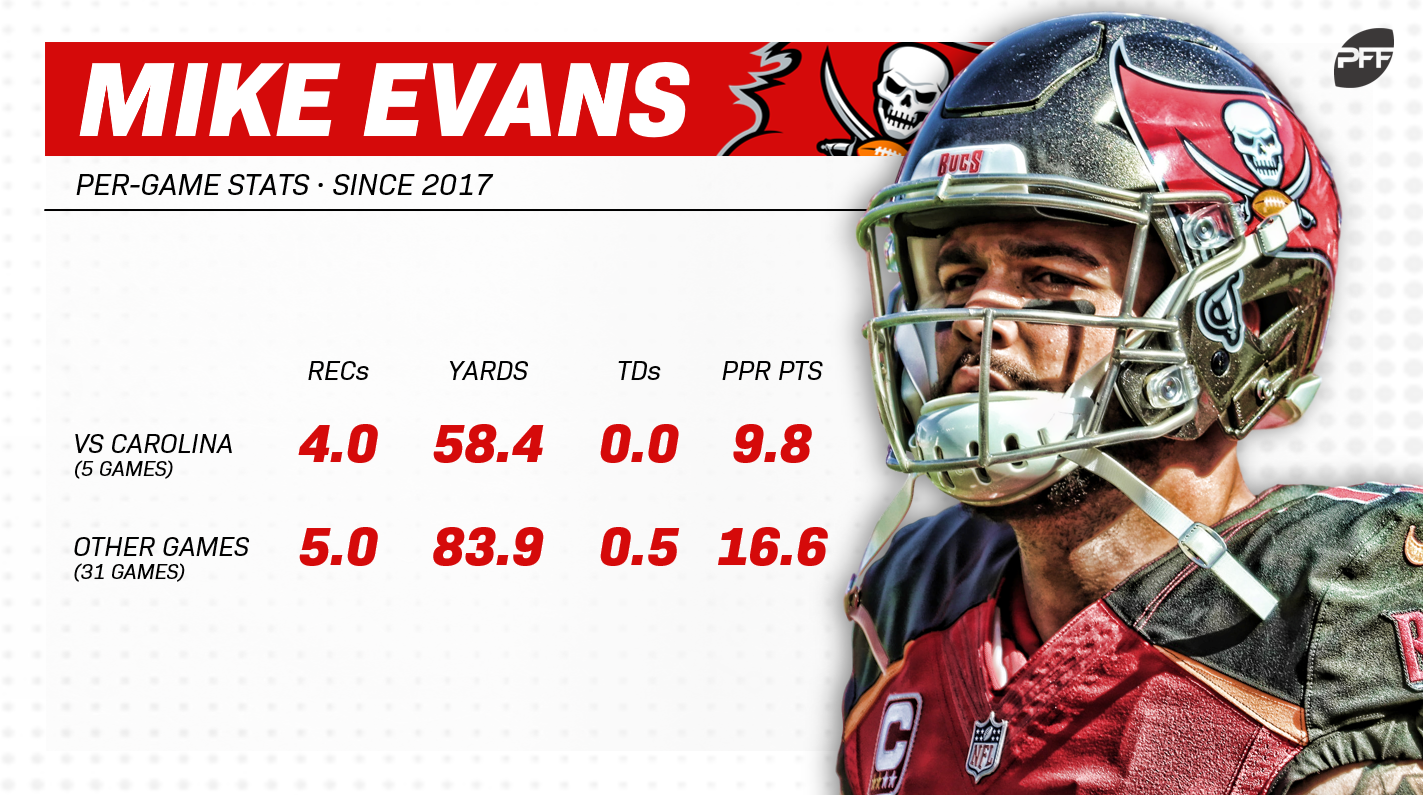 Evans expects to see shadow coverage from James Bradberry this week, just as he has in each of his last three games against Carolina. Over this span, Evans averages 8.0 targets and just 7.2 fantasy points per game against Carolina. Evans is by no means a “sit” (I have him ranked as a mid-tier WR2), but we should expect below-average production.

Chris Godwin, meanwhile, is a must-start. He’s scored a touchdown and totaled over 100 yards receiving in each of his last two games against Carolina. The Panthers rank fourth-best in schedule adjusted fantasy points per game allowed to opposing WR1s, but the 11th-worst to WR2s. They’re also allowing the second-most targets per game to opposing slot wide receivers.

Like Evans, Smith-Schuster probably isn’t an out-right “sit,” but he might be if Mason Rudolph is out. And even if Rudolph plays, he’ll draw a brutal matchup. Casey Hayward will likely shadow Smith-Schuster on all perimeter routes, and then leave him to face off against Desmond King on the remainder of his routes in the slot. Of 137 graded cornerbacks since 2017, Hayward ranks best and King second-best in PFF grade.

Like Evans, Cook shouldn’t be benched, but we shouldn’t expect much from him this week. The Eagles rank best in yards allowed per carry (2.81), and for the second-straight season they rank top-five in rushing fantasy points allowed per game.

As I tried to explain elsewhere, Gordon might not be the bell cow his owners were hoping he’d be. Even so, he’s at least the team’s early-down workhorse and primary goal-line back. That means, this week, as 6.5-point home favorites against Pittsburgh, he should out-score Austin Ekeler and yield mid-range RB2 returns.

Gordon is questionable this week, but he needs to be started if active. He’s underwhelmed for fantasy but has seen good volume, averaging 8.7 targets per game over the past three weeks. That number should climb this week, with Phillip Dorsett out and Gordon in an ideal matchup. Gordon will likely draw shadow coverage from Janoris Jenkins, who has given up the eighth-most fantasy points and ranks 82nd among 105 cornerbacks in PFF grade.

Dissly has played in only seven full games throughout his career, and over this span is averaging 15.9 fantasy points per game. With Nick Vannett no longer in the picture, Dissly is serving in an expanded role — he ran a route on 65% of Russell Wilson’s dropbacks last week. As I argued elsewhere, he’s operating in the Jimmy Graham role in this offense, which means a dependable target-floor and elite touchdown-upside. He’s a TE1 until further notice, and especially this week, against a Browns defense that ranks bottom-seven in fantasy points per game allowed to tight ends for the fourth-consecutive season.

If Diggs doesn’t hit this week, I don’t know when you can ever feel good about starting him — but I do feel good about starting him this week (as a borderline WR2). Both Adam Thielen and Diggs had the “squeaky wheel” narrative working in their favor last week, but Thielen was the only wheel who was greased. Look for Kirk Cousins to make amends this week, and for Diggs to take advantage of an ideal matchup against Philadelphia’s pass-funnel defense. For the third consecutive season, Philadelphia is giving up the most fantasy points per game to opposing outside wide receivers.

Samuel was the top regression candidate highlighted in this week’s XFP Report, averaging 15.0 XFP per game across his last four games. This ranks 17th among wide receivers, and ahead of D.J. Moore (10.8) and Greg Olsen (10.0). Look for a bounceback game this week, against a Tampa Bay pass-funnel defense that is giving up the sixth-most fantasy points per game to outside wide receivers. Samuel totaled 24 targets, 11 receptions, and 179 yards in his last two meetings against Tampa Bay.

Wentz ranks behind only Russell Wilson in PFF grade, but he also ranks just 14th in fantasy points per game (21.9). He’s just a high-end QB2 this week, in a brutal matchup, on the road against the Vikings. Since 2017, opposing quarterbacks are averaging just 11.0 fantasy points per game in U.S. Bank Stadium, which ranks best among all home defenses.

On Monday, Eagles head coach Doug Pederson said Howard will get a higher percentage of the carries moving forward. That may be true, but that won’t matter much this week. The Vikings are home favorites who rank top-six in yards allowed per carry and rushing fantasy points per game allowed. 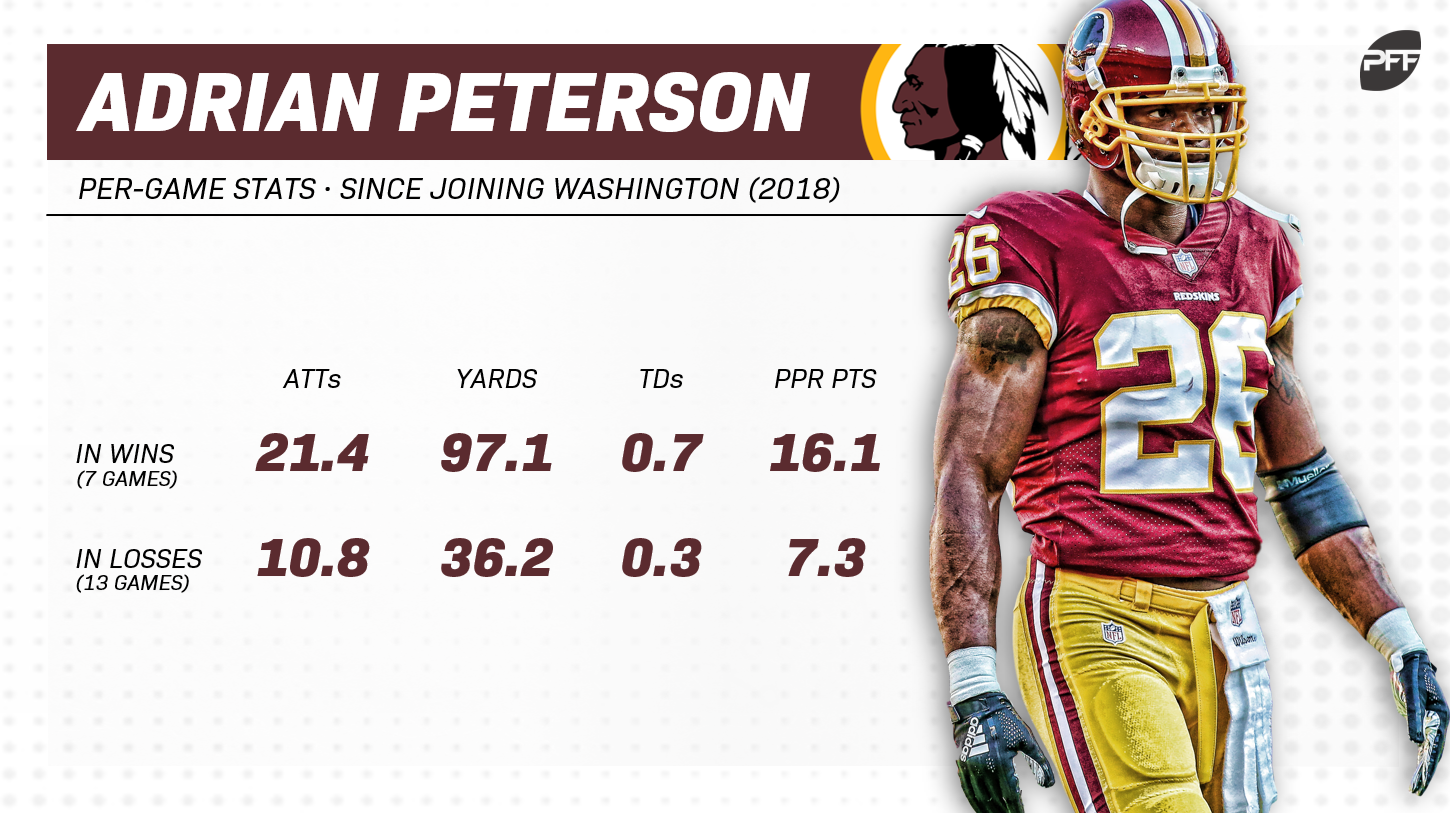 For the first time this season, and maybe for the first time all year, Washington is favored (by 3.5 points) heading into a game. And maybe, this is the only time all season you can feel comfortable starting Peterson. Interim head coach Bill Callahan wants to establish the run this week, and it’d be an ideal week to do it — the Dolphins have given up the most rushing fantasy points per game (22.9) to opposing running backs. Last season, Peterson averaged 16.7 fantasy points per game in victories, but only 8.5 in losses.

With Todd Gurley dealing with a bruised thigh, consider Brown as a mid-range RB2 if he’s out. San Francisco is a bottom-five matchup, but the RB1 role is a valuable one in Sean McVay’s offense. Last season, with Gurley banged up, C.J. Anderson totaled 422 rushing yards and four rushing touchdowns across just one three-game stretch.

If desperate for a spot-start, you could do worse than Williams, who has been Josh Rosen’s favorite target in both the regular season (24% target share) and preseason (26%) this year. Over the last four weeks, Williams ranks 11th among all wide receivers in XFP per game (16.2). For the full season, he also ranks third in end zone targets per game (1.3) and 14th in XFP market share (23%). This week, he gets a Redskins defense that is giving up the third-most fantasy points per game to opposing wide receivers.

If even more desperate for a spot-start, consider Hilliman, who should be thrust into a workhorse-role due to New York’s depleted running back depth chart. Last week, Hilliman played on 65% of the snaps, while drawing 75% of the carries (nine of 12) and 66% of the targets out of the backfield (two of three) after Wayne Gallman suffered a concussion. He’ll have a worst possible matchup against the Patriots but should yield mid-range RB3 returns on volume alone.