With another week behind us, and some more fresh stats to analyze, I’m here to help you with your toughest fantasy football start/sit decisions of the week for Week 11.

Jacobs is one of the league’s top workhorse running backs, but, with 92% of his touches coming on the ground, he’s not quite a bell cow – meaning he’s highly sensitive to gamescript. For instance, across Oakland’s four losses, Jacobs is producing like a low-end RB3 (10.2 fantasy points per game), and on low-end RB3 volume (11.0 XFP per game). Meanwhile, across Oakland’s five victories, Jacobs is producing like a high-end RB1 (21.9) on mid-range RB1 volume (16.1)

With that in mind, his Week 11 matchup couldn’t be any more perfect. Against the Ryan Finley-led Bengals, Oakland is a near-lock to win this week, favored by 10.5 points. Oakland also has its highest touchdown expectation of the season, with a league-high 29.75-point implied point total (6.7 points above their season average). That’s especially good news for Jacobs, who ranks sixth among all players in expected touchdown percentage (33%). As if the matchup couldn’t look any better, Cincinnati also ranks dead-last in schedule-adjusted fantasy points per game allowed to running backs. 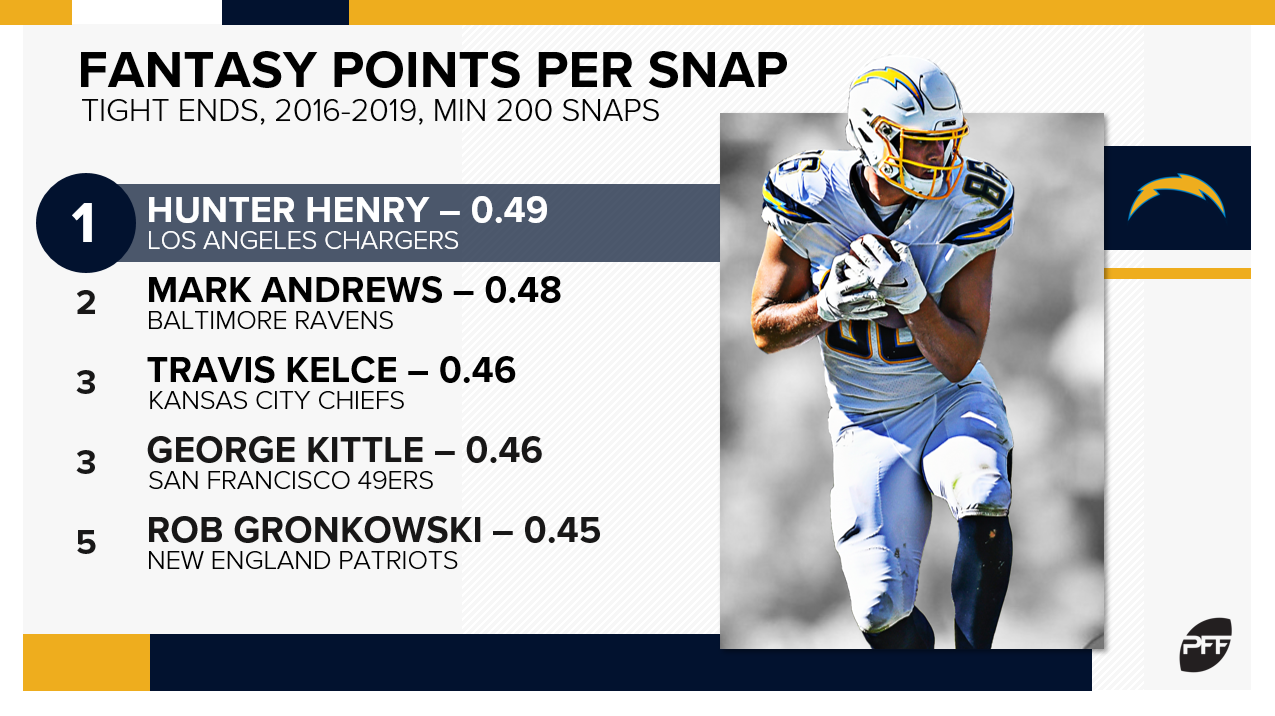 Moore has hit 100-plus yards in back to back games, averaging 10.0 targets per game over his last four games. He gets a top matchup this week, against the Falcons, and backed by a season-high 28.25-point  implied total (third-highest on the week). Moore runs 57% of his routes lined up to the left, while Atlanta is giving up the most fantasy points per game to opposing left wide receivers (14.7). He’s a high-end WR2 this week.

If Johnson were fully healthy, he might rank as high as top-six this week, even in a brutal matchup against the 49ers. However, he’s far from fully healthy, totaling just six carries and one target over his last two games. Even if this were a better matchup, he’d be far too risky to start this week.

Jeffery averages just 7.9 fantasy points per game over his last three games, and now draws a worst-possible matchup. He’ll draw shadow coverage from Stephon Gilmore, who, in 14 consecutive shadow games hasn’t allowed any wide receiver to exceed 11.0 fantasy points against him in coverage.

Jalen Ramsey has shadowed three times this year, holding DeAndre Hopkins, Julio Jones, and JuJu Smith-Schuster to a combined 8.3 fantasy points per game. Stuck catching passes from our second-worst-graded starting quarterback, I wouldn’t expect much more than that from Robinson this week.

Last week, after Devonta Freeman left the game with an injury, Hill received 21 of the team’s 22 touches out of the backfield. With Freeman now out for some time, Hill is locked into a bell cow workload and a high-end RB2 expectation this week. Carolina is giving up the most rushing fantasy points per game to opposing running backs (20.4).

Since Week 4, Everett ranks second in targets (44), and top-seven in XFP per game (12.1) and actual fantasy points per game (12.0). In a brutal week for tight ends, with George Kittle, Austin Hooper, and Evan Engram out, he’s a top-six tight end this week. Chicago has seen 28% of their (receiving) fantasy points allowed go to tight ends, which ranks third-most.

Among 86 qualifying wide receivers, Brown ranks sixth in yards per route run (2.62) and 10th in targets per route run (0.24). Baltimore’s passing game is highly concentrated among just two players — 48% of Lamar Jackson’s passing yards have been accrued by Brown and Mark Andrews. Andrews will have a tough matchup ahead of him — the Texans rank second-best in schedule-adjusted fantasy points per game allowed to tight ends — but Brown will draw a top-10 matchup. Houston is giving up the sixth-most fantasy points per game to outside wide receivers, while also ranking bottom-10 to wide receivers on deep passes and to opposing WR1s. 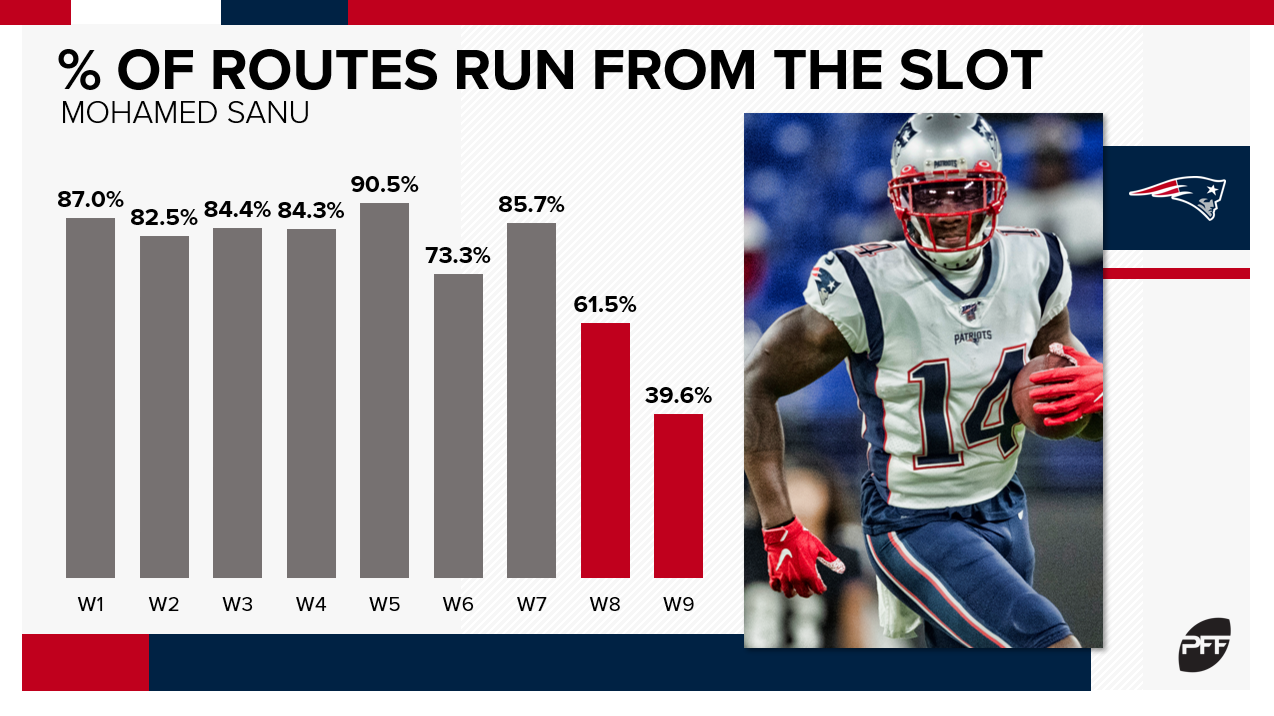 Sanu comes off a 14-target 24.1-fantasy point game to draw a best-possible matchup against the Eagles. Julian Edelman, who has seen 66% of his targets come from the slot, will have a tougher draw, as the Eagles are giving up a league-low 7.6 fantasy points per game to opposing slot wide receivers. Sanu, meanwhile, has seen just 37% of his targets from the slot since joining the Patriots, and, for the third consecutive season, the Eagles are giving up a league-high 29.6 fantasy points per game to opposing outside wide receivers.

Williams has been consistent, reaching at least 45 yards in eight consecutive games, but, still, he ranks just 53rd in fantasy points per game (10.0). As I’ve outlined in other places, he’s due for a positive regression, but that regression is unlikely to come this week. Quietly, Kansas City is giving up the fewest fantasy points per game to opposing outside wide receivers.

Gesicki was a popular waiver-wire add last week, but he’s unlikely to do much for you this week. Buffalo is giving up the fewest fantasy points per game to opposing tight ends (6.5), including a combined 6.8 fantasy points to the two TE1s they’ve faced (Zach Ertz and Evan Engram).

Gesicki has a worst-possible matchup this week, but Parker’s matchup might be just as difficult — he’s expected to draw top cornerback Tre’Davious White in shadow coverage this week. White has shadowed in each of his last two games, holding Terry McLaurin and Odell Beckham Jr. to a combined 54 yards on 14 targets.

In Week 10 – with Kenyan Drake in Arizona and Mark Walton suspended – Ballage played on 82% of the snaps, while drawing 20 of 22 carries and four of seven targets out of the backfield. Make no mistake, Ballage is probably the league’s worst starting running back, and on a bottom-three offense, but that’s borderline RB1 usage. I’d start him as a high-end RB3 this week, against a Buffalo defense that ranks fourth-worst in schedule-adjusted fantasy points per game.

In Week 10, with George Kittle out and Emmanuel Sanders playing on just 29% of the snaps, Samuel saw a team-high 11 targets, catching eight for 112 yards. This came one week after Samuel saw seven targets against Arizona. Against Arizona again, without Kittle out and likely Sanders too, Samuel seems poised for a big game and a high-end WR4 expectation.

Cobb is fresh off back-to-back eight-target games and his biggest score (22.6 fantasy points) of the season. In a perfect matchup, he’s a fine desperation-flex-play. With Amari Cooper drawing top shadow cornerback Darius Slay, Cobb should feast against a Detroit defense that is giving up the fourth-most fantasy points per game to opposing slot wide receivers. Further, Detroit is giving up the second-most fantasy points per game to wide receivers on passes traveling 15 or more yards through the air. That’s where Cobb has scored 44% of his fantasy points, compared to only 17% for Michael Gallup.