Hello, and welcome to Week 11 of the Expected Fantasy Points Report. If you’re unfamiliar with expected fantasy points, you can read this in-depth explanation from the offseason. You can also read more about expected touchdowns.

Through 10 weeks of action, here are the top 25 players in expected fantasy points per game: 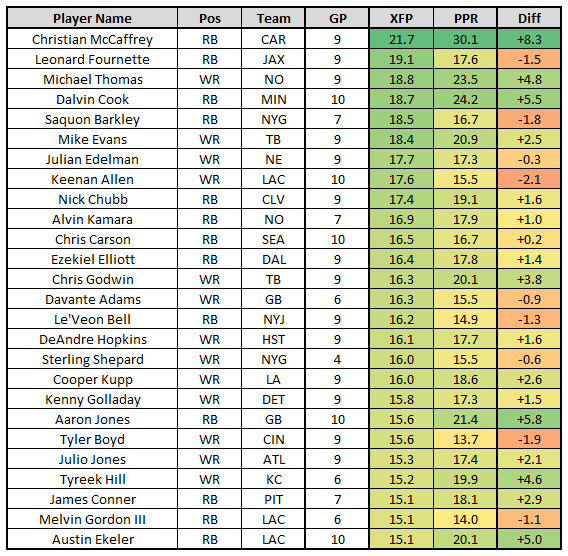 Quite easily, McCaffrey is seeing the best and most consistent volume of any player in fantasy football. He leads all players in XFP per game (21.7) and has finished top-six in XFP in seven of nine games this year (with a season-low ranking of just 13th). Without exaggeration, McCaffrey is on pace to put together the greatest fantasy season of all-time. However, it’s also the most efficient fantasy season we’ve ever recorded in our dataset. On top of his 21.7-point per-game expectation, which ranks sixth-best over this span, he’s outscoring his expectation by 8.3 fantasy points per game. This probably means McCaffrey is due for a regression to the mean, but, because our expectation is based on the league average player, and McCaffrey is much better than that, that regression might not be so steep. For example, McCaffrey exceeded his expectation by 4.5 fantasy points per game in 2018.