All March long we have looked at sleeper and bust candidates at each position. Now, we’re diving into the fantasy landscape at tight end. Let’s start with some players that could offer some great upside.

Below are some of my favorite sleeper tight ends at this juncture of the offseason:

The Bears liked what they saw in Burton enough to sign him to a four-year, $32 million deal this offseason. The former Eagle displays a great skill set, but has seen limited game action — he has only played 741 career snaps. 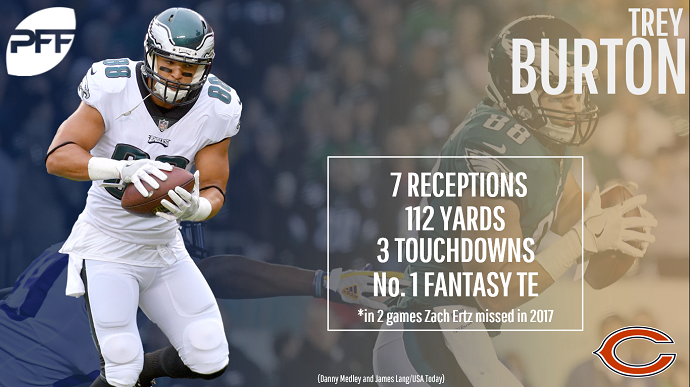 Burton caught 72.7 percent of the balls thrown his direction during the regular season and only had a single drop in the 33 times he was targeted. For the year, Burton had 23 receptions for 248 yards and five touchdowns. He really shined when Zach Ertz was sidelined and he saw an elevated role in the offense.

Matt Nagy’s system favors tight ends and clearly, given the price tag they’ve placed on him, the Bears view him as a starter. However, expect second-year tight end Adam Shaheen to still be involved. Chicago will utilize two-TE sets frequently, so both players could pop up on the fantasy radar. Burton is one to grab though could prove to be a nice back-end TE1.

There was a nice crop of young tight ends who entered the league in last year’s draft, and Njoku may prove to be the best long-term option in the mix. The Browns have gone through a major offseason offensive makeover and if the moves pan out Njoku could start producing sooner rather than later.

He reeled in 32 of his 58 targets for 386 yards and four touchdowns as a rookie and definitely showed progress as the year wore on. A step forward can be expected during his second season, especially if he can develop some early chemistry with new quarterback Tyrod Taylor.

The arrival of Jarvis Landry alone should really open things up for Njoku over the middle and because he’s a solid run blocker he’s likely to see a large share of snaps.

Even in his limited action in 2017, Njoku graded out as PFF’s 10th-best receiving tight end. He also had the fourth-best average depth of target (11.6 yards) among all tight ends who played at least 50 percent of their team’s snaps. Look for improvement in his numbers in 2018.

Outside of Evan Engram, which second-year TE do you think will have the best fantasy season in 2018?

After the Giants’ receiving corps was ravaged by injuries, the team turned to Engram as one of its primary targets in 2017. The rookie responded in big way, finishing fifth in fantasy points at the position. Only Travis Kelce received more targets in 2017 among tight ends.

His 108 targets, 64 receptions, and 722 receiving yards were the most by a rookie tight end during the PFF era (since 2007). Engram also had 15 or more PPR points and scored five times over seven contests Weeks 6-13.

There are some concerns lingering entering Engram’s sophomore campaign. New head coach Pat Shurmur’s arrival could have a negative impact. His offenses haven’t seen great tight end production over the years and the healthy return of other pass catches is likely to lead to a regression in targets for Engram.

Engram is just 23 years old and is still developing as a player. While he’s likely to see fewer passes thrown his way, there should be more space for Engram to make big plays over the middle. If he continues to take a step forward his ceiling is as high as any tight end outside of the big three – Rob Gronkowski, Travis Kelce, and Zach Ertz.

Rudolph saw his numbers across the board take a dip in 2017 after a career-best performance a year earlier. The biggest dropoff came in targets, as he went from seeing 120 targets in 2016 to seeing the ball thrown his way just 76 times last season.

He netted only 57 catches for 532 yards after pulling in 83 balls for 840 yards in the previous campaign. The one number where Rudolph didn’t see a dip was in his touchdowns. He scored one more time in 2017 and now has 15 trips to the end zone over the last two years.

The arrival of Kirk Cousins is expected to give the entire offense a boost, and Rudolph is no exception. Cousins played in some TE-friendly systems during his time with the Redskins and has a knack for targeting the position. Of the 99 passing touchdowns Cousins amassed in Washington 27 of them had a tight end as the recipient.

The Vikings have one of the most explosive offenses in the NFL entering 2018 and Rudolph will remain one of the team’s best red-zone options in the passing game. He’s projects a bit better in standard formats, but offers top-five potential.

There are plenty of young tight ends around the league who possess some nice upside, but for owners who wait until the end on draft day before addressing the position, it might be wise to give Clay a deep look.

The 29-year-old dealt with knee and hamstring injuries during stretches of last season, but still finished with some respectable numbers as he caught 49 of 74 targets for 558 yards and two touchdowns over 13 games.

Clay started off on fire last year before going down in Week 5, as he was fantasy’s TE4 through the first four weeks of the season. With so many new things in place in Buffalo this offseason, including a change at quarterback, it remains to be seen how Clay fits in completely moving forward. However, his ability he has displayed as a steady pass-catcher over his career should keep him on the fantasy radar.

Check out the rest of the series: