LOS ANGELES, CA - OCTOBER 08: Chris Carson #32 of the Seattle Seahawks warms up before the game against the Los Angeles Rams at Los Angeles Memorial Coliseum on October 8, 2017 in Los Angeles, California. (Photo by Harry How/Getty Images)

This month on Tuesdays and Thursdays we will be looking at fantasy sleeper and bust candidates at each position. Walter Spurlin already offered up some hot takes of some sleepers and busts at quarterback.

Now, it’s time to talk about some fantasy backfields. Let’s start with some players that could offer some great upside. To help determine market value I used our early 2018 PFF consensus fantasy rankings and one of the recent staff 12-team PPR mock drafts as reference points.

Below are some of my favorite sleeper running backs at this juncture of the offseason:

After a breakout 2016 campaign, Ajayi fell short of expectations last season and left owners that invested an early-round pick in him disappointed. A mid-season trade from Miami to Philadelphia put him in a better offense and led to the 24-year old getting a Super Bowl ring, but it also limited the running back’s opportunities.

Ajayi failed to find the end zone and averaged just 3.4 yards per carry during seven games with the Dolphins. His production improved as he moved to the Eagles, yet his touches dropped. Before the deal Ajayi averaged 21.7 touches per game compared to just 11.9 touches an outing in his seven regular-season contests with the Eagles.

There’s reason for optimism though, as Ajayi appeared to be a bigger contributor during the Eagles’ postseason run (16 touches per game) and most expect the team to part ways with LeGarrette Blount, allowing Ajayi to secure an even bigger early-down role in 2018.

Expect him to be a solid RB2 option and one of the few running backs likely to be drafted outside of the top 15 at the position that offers true RB1-upside. He should be the feature back in one of the league’s most high-powered offenses.

The Redskins’ offense has already undergone a major overhaul after trading for Alex Smith and letting him take over at quarterback for Kirk Cousins, who is poised to sign elsewhere as a free agent. Who will be the top choice out Washington’s backfield?

Thompson emerged as the best running back weapon in D.C. a season ago before suffering a season-ending fibula fracture in November. He carried the ball 64 times for 294 yards and two touchdowns and caught 39 of his 51 targets for 510 yards and four more scores. 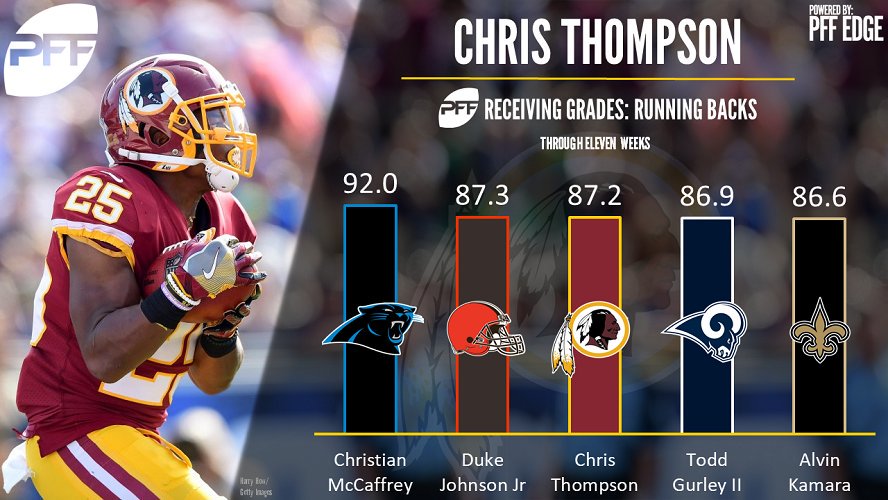 Only seven running backs put up more PPR points during the first eight weeks of 2017 than Thompson and no running back that played 50 percent or more of their team’s snaps averaged more than his 0.64 points per opportunity during that span.

It would not be surprising to see the Redskins make some upgrades at running back since they don’t appear to be enamored with Samaje Perine or Rob Kelley. Regardless, Thompson will be a big factor in the passing game assuming he returns to full health and develops some quick chemistry with Smith.

Once Aaron Rodgers went down the Packers’ offense quickly tanked as it turned from a fantasy gold mine into a no man’s land overnight. It became very hard to trust any Green Bay player in your fantasy lineup. However, Williams eventually stepped up out of the backfield to become a hot late-season fantasy commodity.

When Ty Montgomery and fellow rookie Aaron Jones went down with injuries, Williams took over as the lead back over the final eight games and averaged 93.3 yards per contest. During the pivotal stretch of the fantasy schedule of Weeks 12-14 last season, Williams finished only second to Le’Veon Bell in fantasy points as he rushed for 228 yards and three scores on 57 carries and pulled in 13 of his 14 targets for 148 yards and two touchdowns.

Many in the fantasy community still favor Jones over Williams for the long term, but the Packers drafted Williams ahead of Jones a year ago and Williams currently projects ahead of him on the team’s depth chart. With a healthy Rodgers set to return any running back that is able to emerge as the top choice in Green Bay will become a valuable fantasy asset.

Which of these #Packers running backs will offer the most fantasy value in 2018?

The Seahawks are shaking things up on both sides of the ball already this offseason, including in their backfield. The team has already moved on from Eddie Lacy, but things still remain pretty crowded at running back in Seattle.

Carson turned some heads last year as a rookie during training camp and was off to a hot start before suffering a season-ending injury in Week 4. He accumulated 208 yards on 49 carries (4.2 yards per carry) and caught seven passes for 59 yards and a touchdown in just over three games of action.

He will need to hold off Mike Davis, C.J. Prosise, and J.D. McKissic along with whatever newcomers Seattle might add in free agency or during the draft to remain relevant. If he starts the preseason atop the depth chart as expected, Carson will provide a nice return on his current 10th-round price tag even playing behind Seattle’s weak offensive line.

Dixon is just one of the many players coming off of an injury to keep your eyes on in fantasy entering 2018. He missed all of last season with a torn meniscus, which at least let him serve his six-game suspension while he was on the shelf.

While Dixon was sidelined. Alex Collins became the Ravens’ primary running back, finishing with a 212/973/6 stat line. However, head coach John Harbaugh has remained non-committal early this offseason on Collins being his lead back this season.

It’s not even certain that Dixon will keep his roster spot at this point. He has much to prove, but he did show flashes a rookie. In the final six weeks of 2016 Dixon was the RB13 in fantasy with 281 yards and a pair of touchdowns on 61 attempts to go along with 20 catches for 114 yards and a TD on 27 targets. He’s still only 24 years old, and if he comes to camp motivated Dixon could still make an impact in Baltimore.