On Tuesdays and Thursdays this March we will be looking at fantasy sleeper and bust candidates at each position. Walter Spurlin already offered up some hot takes of some sleepers and busts at quarterback.

Earlier this week I presented some running back sleepers for 2018. Now, it’s time to explore some players that are primed for a letdown and currently overvalued. To help determine market value I used our early 2018 PFF consensus fantasy rankings and one of our recent staff 12-team PPR mock drafts as reference points.

Below are some of my running back busts at this point of the offseason:

Miller may be running out of chances to prove himself in Texas. He’s entering the third year of a four-year, $26 million contract. D’Onta Foreman is ready to take a step forward in his sophomore season and Miller hasn’t been able to make consistent, game-changing plays.

Despite his pedestrian rushing totals, Miller remained fantasy relevant with his 36/327/3 receiving line. Those numbers are consistent with what Miller has done over the past five years as a pass catcher out of the backfield.

Miller’s lackluster 3.7 yards per carry and 2.5 yards after contact numbers he posted last season are problematic. It would not be out of the question if he were to get cut at some point this offseason given the Texans’ cap space. If Miller opens the year as the starter in Houston he will be on a short leash.

After a slow start, Lynch finished strong down the stretch in his first season as a Raider. He total 67 yards and/or scored in eight straight games to close out the campaign, including posting double-digit efforts (PPR) in all but one of those contests.

Lynch had 19 or more touches over the last six weeks of 2017 despite not player a year earlier. The Raiders turned to him to boost a struggling offense. The arrival of Jon Gruden should breathe some life into the unit and if history is any indicator, running backs can flourish in the coach’s system. 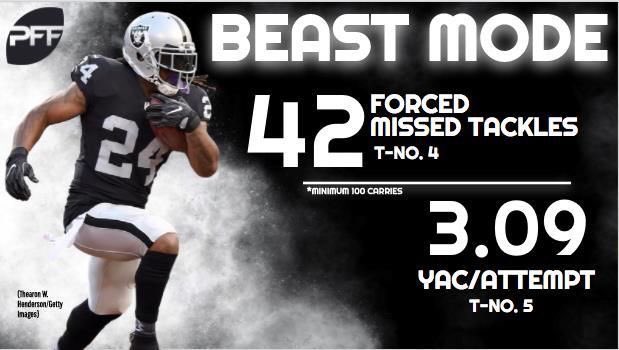 Despite the positives, the fact remains Lynch will turn 32 in April. He hasn’t played in 16 games since 2014 and he had four straight years over 300 touches leading up to that. Even if he does starts out 2018 as the Raiders’ top back, can he finish the season?

Oakland will certainly be looking at all options at running back this offseason. It would be hard to envision Lynch as anything more than a RB3 in fantasy and that is his ceiling. Given his current price tag there are alternatives in that same tier with much higher upside.

Coleman finished as a RB2 in each of his last two seasons and will still just be 25 when he takes the field in 2018. He has shown flashes during his brief career, especially when Devonta Freeman has been sidelined. Coleman scored four times and rushed for 223 yards during a three-game stint while Freeman was sidelined last year.

His ability to produce as a receiving option has led to some fantasy success. Coleman finished inside the top 12 among running backs in yards per reception (11.1) and yards per target (8.30) in 2017.

The problem is when Freeman is going at full force, Coleman disappears at times. He failed to reach double-digit fantasy points (non-PPR) in eight of 15 games last season. In addition, durability is a bit of an issue as he’s missed eight games in three pro seasons.

Atlanta’s high-powered offense took a step backward after Kyle Shanahan departed. After scoring a league-best 33.8 points per game during their run to the Super Bowl in 2016, the Falcons finished 15th in the NFL last season with 22.1 points per contest. It will be tough to produce two top-30 runners if they cannot improve.

The Redskins are going through an offensive makeover this offseason and it is going to be interesting to watch what they do at running back.

Perine led the team as a rookie with 603 rushing yards and a touchdown on 175 attempts after getting pressed into action after Rob Kelley and Chris Thompson both suffered major injuries. It caused the team to force him into action earlier than they would’ve liked.

He was considered a marginal prospect coming out of Oklahoma, and his 47.4 overall 2017 PFF grade (No. 55 RB) reflected that assessment. Thompson figures to stay heavily involved on passing downs and maybe even more. Moreover, if the Washington doesn’t add depth in either free agency or the draft at the position it would be a shock.

Perine went in Round 5 in this PFF mock draft and at that price the upside is too limited for me. He should be considered a bench piece at best until proven otherwise.

Once again Riddick finished in the top 10 in receiving yards (444) by a running back in 2017, but he only had two receiving touchdowns, his lowest mark since his rookie season in 2013.

He graded out as PFF’s eighth-best receiving running back as he finished with 53 catches and 444 yards on 68 targets. Riddick also rushed for 286 yards and three touchdowns on 84 carries.

Detroit must address their weakness at running back and are clearly ready to move on from Ameer Abdullah. Expect Riddick to return to his role as a passing-down asset after the team lands on a new early-down running back. He’s an all right flex option in PPR leagues but will likely be overdrafted considering his workload and ceiling is shrinking.