• Where are the targets?: Through 16 weeks, New Orleans Saints running back Alvin Kamara is averaging career-low PPR points per game from purely receiving production.

• Rookie baller: Atlanta Falcons running back Tyler Allgeier finds himself near the top of the position’s leaderboard in just about any relevant rushing metric.

Here, we break down key usage changes at running back in Week 16 and provide answers to some of the week’s most pressing questions in terms of injuries, matchups and more. Finally, you can see where every running back falls in my fantasy ranks. Updated ranks can be found throughout the week on PFF.com as well as the PFF app. 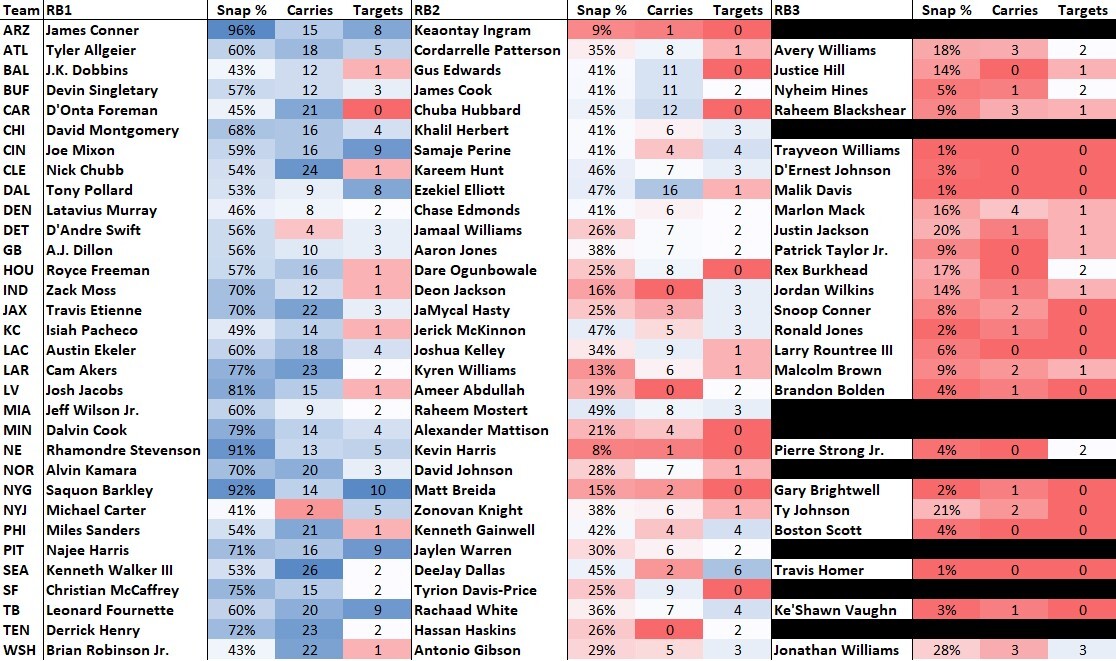 Workhorse running back alert: The following backs simply have too much volume to be benched in fantasy: James Conner (96% snap rate), Saquon Barkley (92%), Rhamondre Stevenson (91%) and Josh Jacobs (81%).

It’s wild how much the Cardinals love feeding Conner: The role shouldn’t be a huge surprise given head coach Kliff Kingsbury’s history of giving his starting running back a huge role. Conner has seldom left the field in his past four games since returning from injury:

The Colt McCoy– (concussion) or Trace McSorley-led Cardinals are unlikely to strike much fear into the souls of a solid Buccaneers defense, but they have been a bit weaker against the run compared to past years, and Conner’s workload falls under the matchup-proof category. Fire up Conner as a volume-based RB1, as he hasn’t finished outside of the position’s top 20 since returning from injury in Week 9.

The Cam Akers Revenge Tour: Akers scored one touchdown and had zero games with even 70 total yards during the first 12 weeks of the season. The struggling Rams eventually threw up their hands and started featuring him in Week 13. The results have been rather fantastic in fantasy land, as the third-year back has posted PPR RB8, RB21, RB21 and RB1 finishes over the past four weeks of action.

This has generally been a season to forget for Akers. Thirty-nine running backs have at least 100 carries this season, and Akers ranks 36th and 29th in yards per carry and yards after contact per carry, respectively. Still, this Rams offense has been a pretty terrible experience for everyone involved this season. It’s not Akers’ fault that the team has averaged just 1.1 rush yards before contact per carry — tied for the sixth-lowest mark in the league.

Ultimately, Akers is averaging 17.8 touches per game over the past month of action with snap rates north of 70% in three of his past four games. The potential return of stud edge defender Joey Bosa (groin, IR) won’t help his cause, but even then it’s a fairly juicy matchup against one of just eight defenses allowing at least 27 PPR points per game to opposing backfields. Akers has rather inexplicably earned volume-based RB2 treatment right when it matters most in fantasy formats of all shapes and sizes. Here’s to hoping your team is still alive to reap the rewards.

The time to feature Travis Etienne is NOW: The Jaguars’ “second”-year running back hasn’t scored since Week 9, but he’s gone for over 100 yards in back-to-back weeks and continues to absolutely dominate touches as his offense’s clear-cut workhorse back.

Up next is an absolute smash spot against a Texans defense that Etienne gained 114 total yards on just 13 touches against back in Week 5. It’s safe to say they have struggled to slow down opposing running backs this season

What the hell, Dennis Allen: A funny thing happened in Week 15, 2022: Saints running back David Johnson ran more routes in a competitive football game than a seemingly perfectly healthy Alvin Kamara. Luckily, Kamara won the Week 16 battles (11 to. 4), but the pass-game usage all season has been perplexing, to say the least.

Kamara himself was asked why he hasn’t been used on third downs more this season. His answer: “I don’t know. You got to ask someone else.”

Reminder: The Saints signed up to pay Kamara $75 million to seemingly be the focal point of their offense and have had as much bad injury luck to their wide receiver room as any team. And yet, Kamara is averaging career-low production in the passing game through 16 weeks:

The run-game usage has been fine enough to help Kamara work as the overall PPR RB14 this season, but last week’s RB9 finish marked the first time since Week 8 that he finished higher than 17th during a single week. Don’t expect a boom performance against the Eagles’ 10th-ranked scoring defense, although there remains just enough usage on the table for Kamara to continue to be a volume-based RB2 start, even if that’s sadly far from what you drafted him to be.