• Atlanta Falcons rookie RB Tyler Allgeier started for the Falcons but remains part of a heavy rotation of backups.

• Chicago Bears RB David Montgomery sees his first preseason action, and the Bears made it clear he remains their every-down back.

• The Thursday and Friday fantasy recaps have you covered for all of the fantasy football takeaways you might have missed. 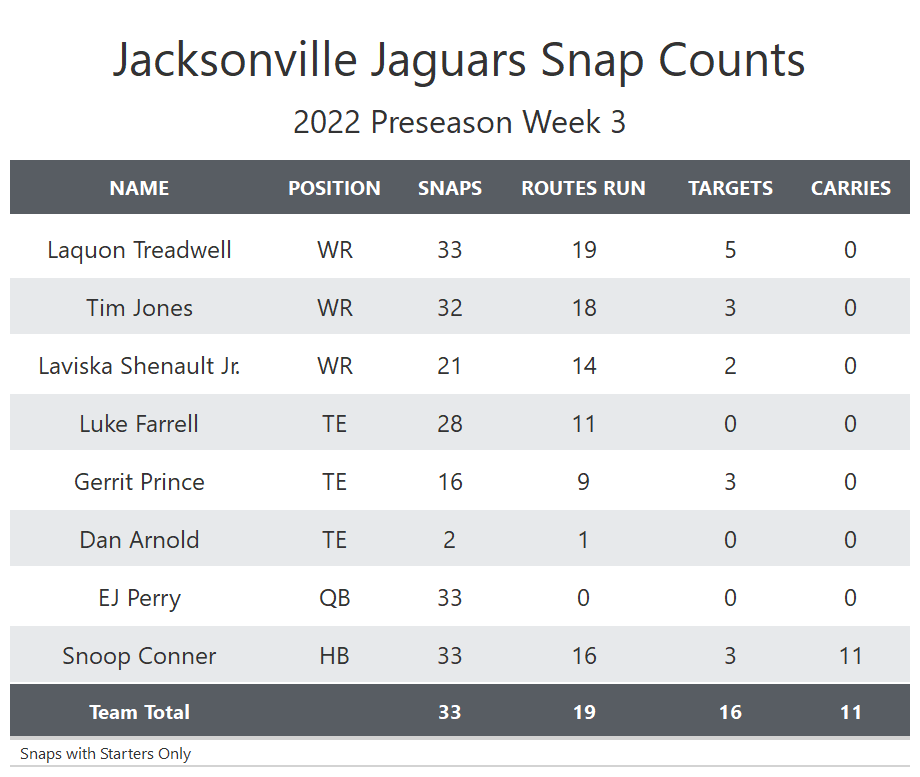 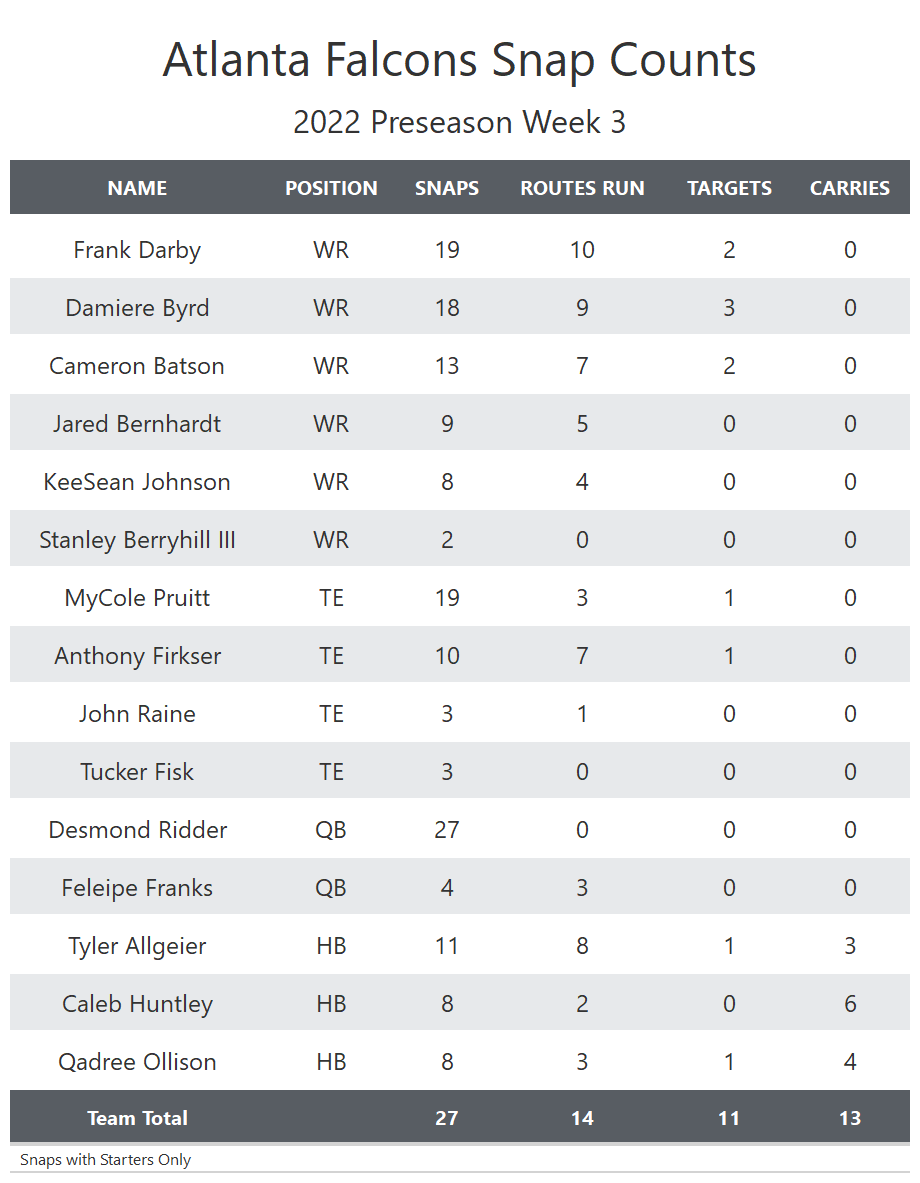 Don’t draft the Jaguars who played: Jacksonville listed 27 players who wouldn’t play Saturday, including the starters and some key backups. This included two running backs, four wide receivers and two tight ends, meaning anyone who played was buried on the depth chart.

Avoid the Falcons' running backs: The Falcons rested both Cordarrelle Patterson and Damien Williams while using a three-man rotation at running back throughout the first half. The situation will likely be unpredictable and ever-changing throughout the season.

Making sense of a crowded Falcons receiving room: The Falcons rested four wide receivers on Saturday, making it clear who is at the top of the depth chart after a confusing rotation early in the preseason. 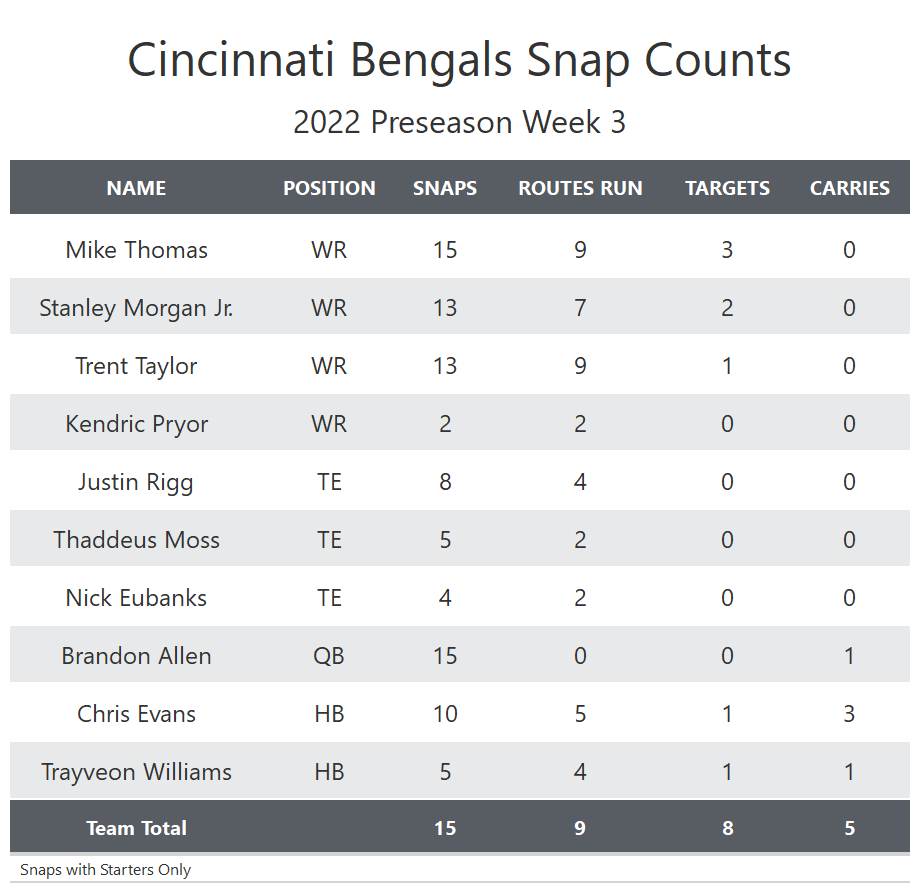 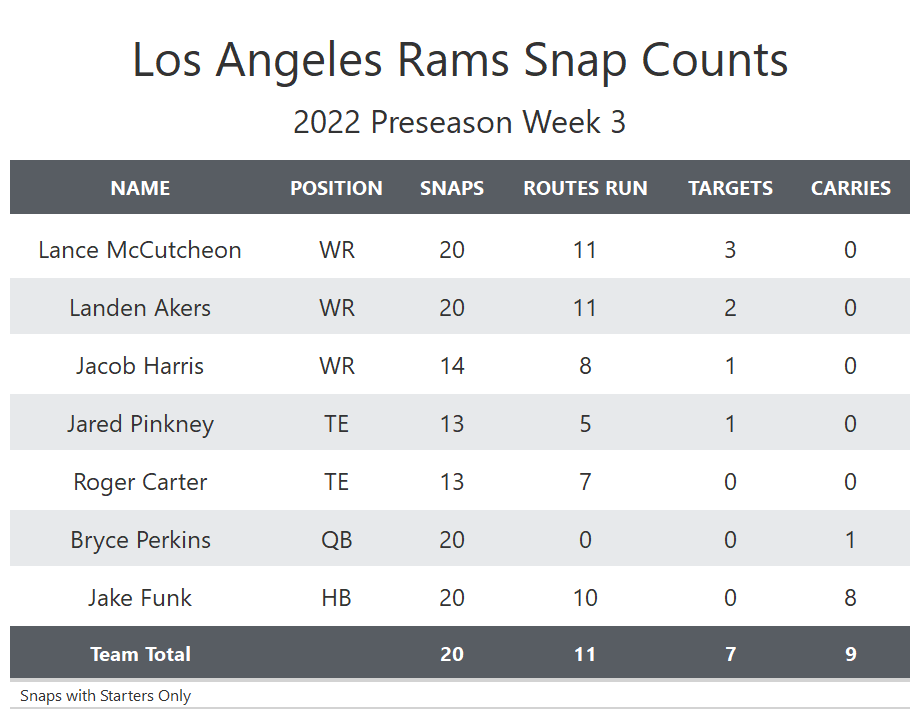 Rams' Jacob Harris remains at wide receiver: The Rams released Kendall Blanton when they reduced their roster to 80 players. Some speculated the 2021 fourth-round pick might move back to tight end, but he remained at wide receiver against the Bengals.

Ignore the Bengals' snap counts: The Bengals have rested their starters all preseason, and that trend continued Saturday. 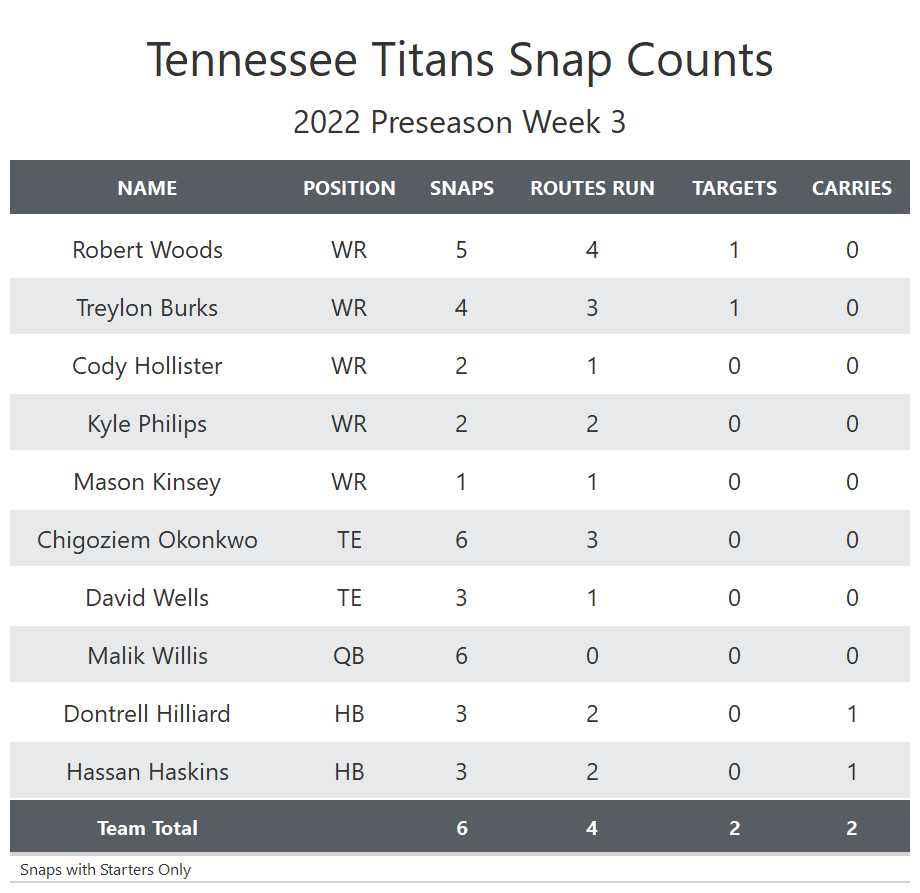 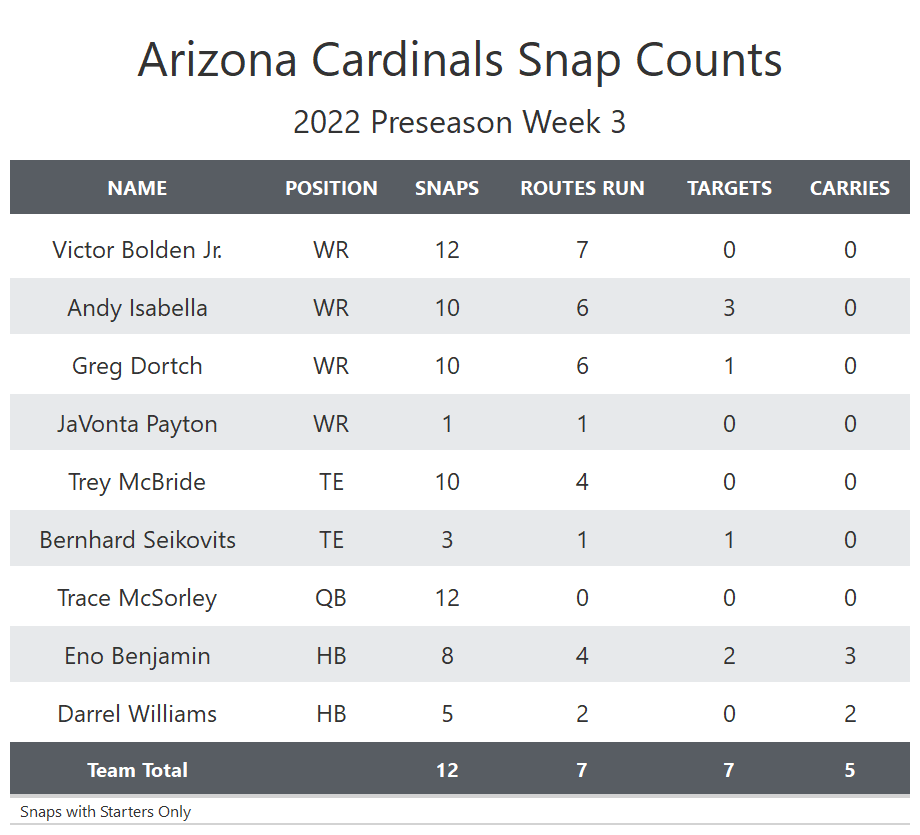 Treylon Burks moves up to top backup for the Titans: Burks started the game for Tennessee and caught two passes before suffering a wrist injury that kept him out for a few drives. It’s hard to know exactly what the plan would have been had he not hurt his wrist, but starting the game was a step in the right direction.

Treat Dontrell Hilliard as the Titans second running back: Hilliard started the game and only needed three snaps before his day was done. He remains ahead of the Titans rookies not just as the receiving back but also as the early-down backup.

Eno Benjamin has a slight lead as the Cardinals' backup: The Cardinals running back usage in their first two games, but against the Titans, it was more straightforward. Benjamin started the game and rotated in and out with Darrel Williams for one drive. 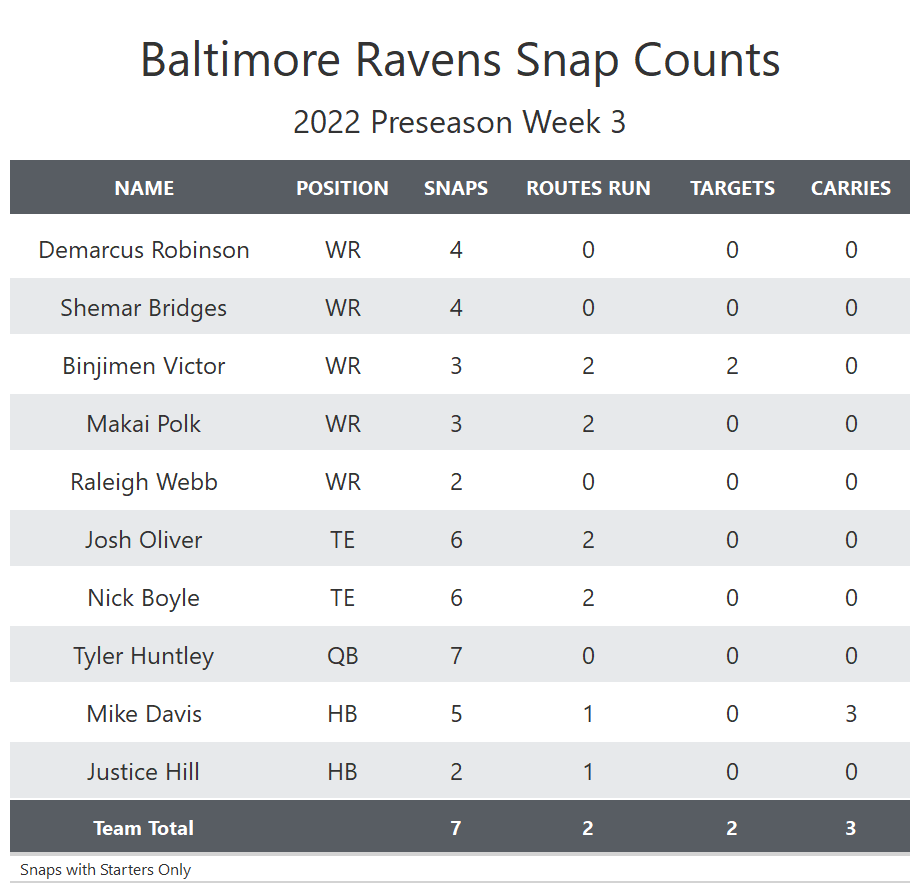 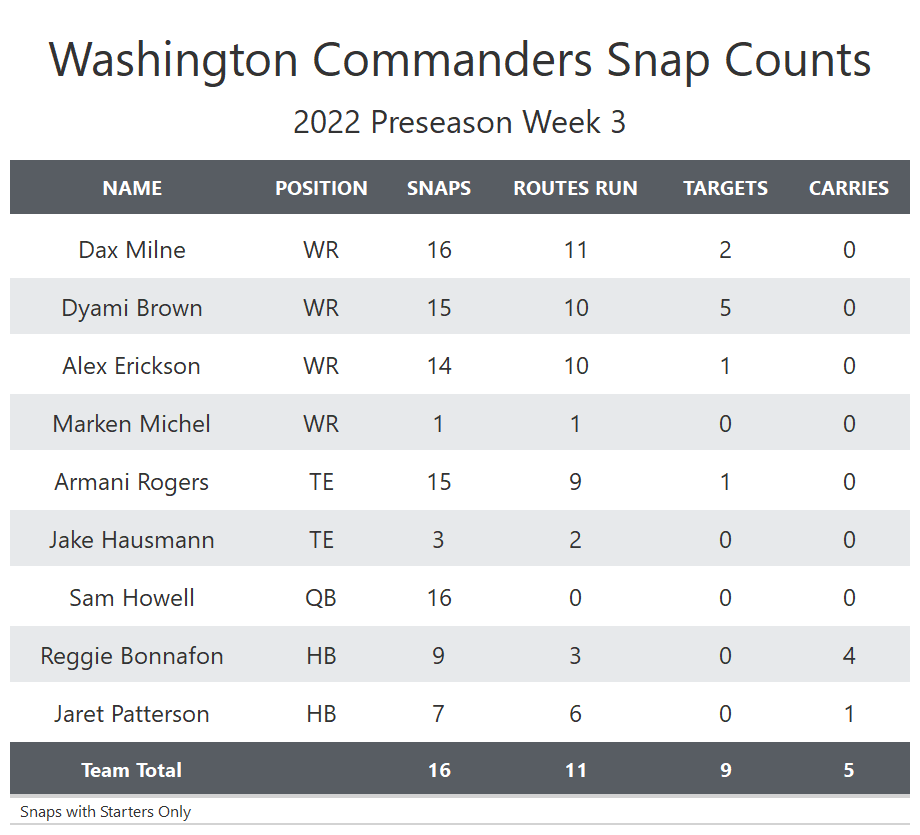 The Ravens told us things we already knew: The Ravens rested their starters and some backups. Other notable backups only played two drives before their day was done.

Armani Rogers could be a Week 1 starter: The Commanders have faced several injuries to their tight ends, which has allowed the undrafted rookie to take the vast majority of snaps for Washington in the first half of their games. 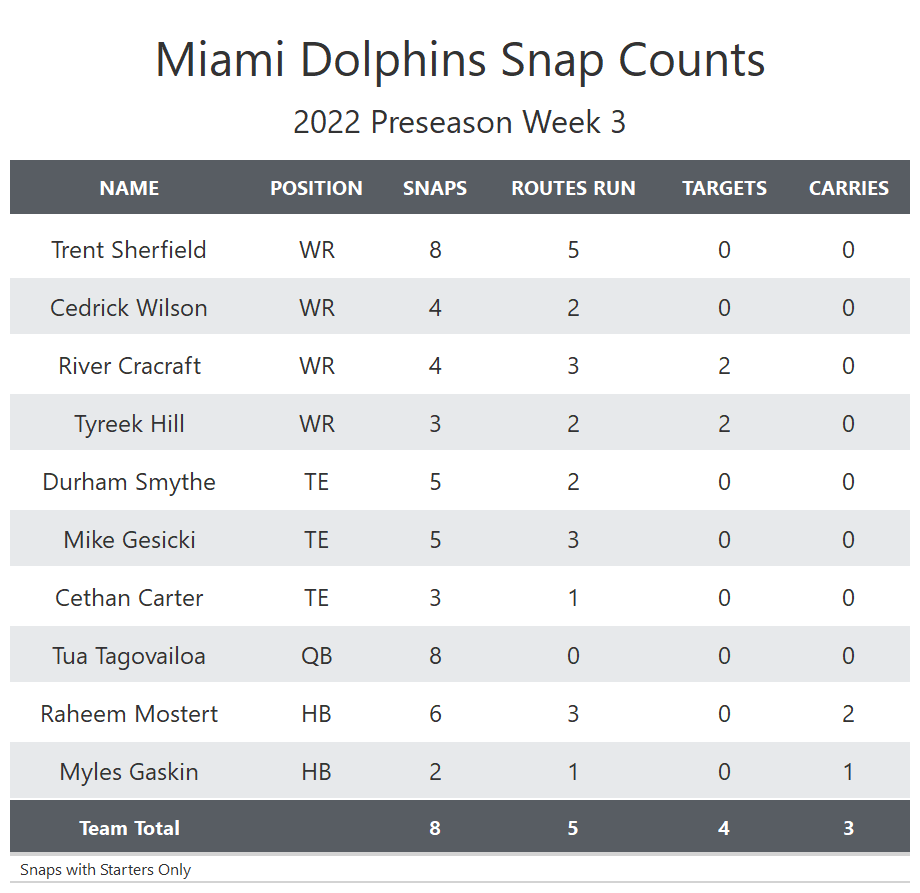 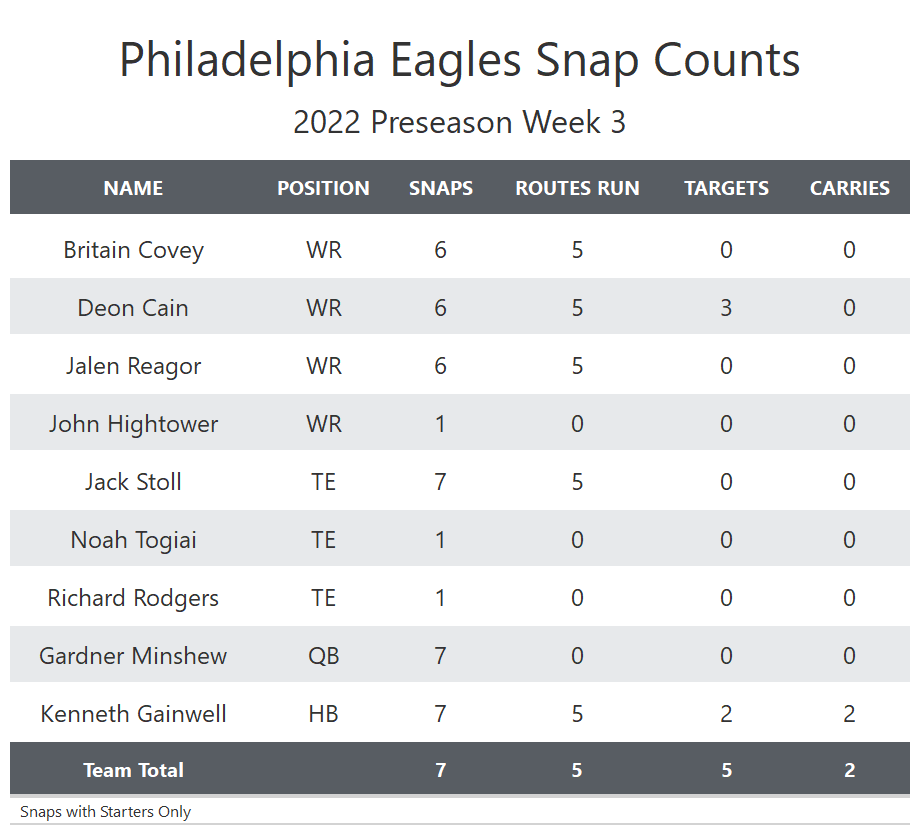 Raheem Mostert is a clear top-two back in Miami: Mostert played the majority of snaps on the Dolphins' first two drives, and then his day was done before several other Dolphins players.

Trent Sherfield appears to be the Dolphins' third wide receiver: Sherfield surpassed Cedrick Wilson to start the game across from Tyreek Hill. Wilson didn’t play his first offensive snaps until after Hill exited the game.

Buyer beware of Mike Gesicki: The Dolphins veteran had seen significant playing time in previous preseason games, raising some alarm. He played in the first three drives tonight but rotated with two other tight ends.

Jalen Reagor’s roster spot could be in jeopardy: The Eagles rested all of their starters plus a number of key backups. This included five wide receivers at the top of their depth chart. 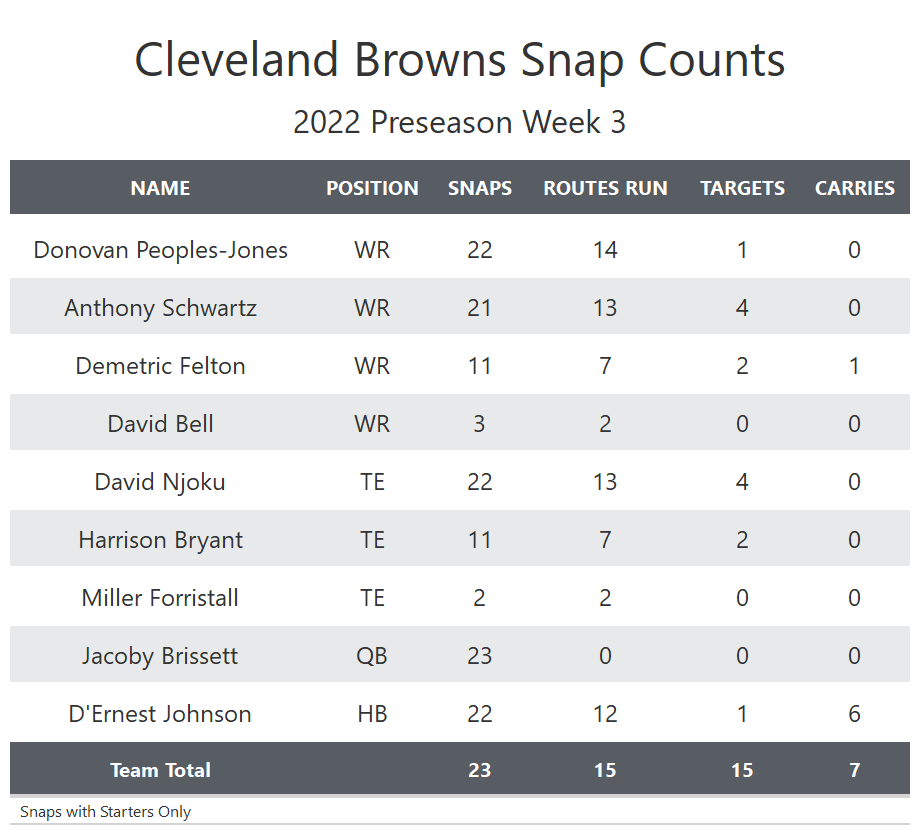 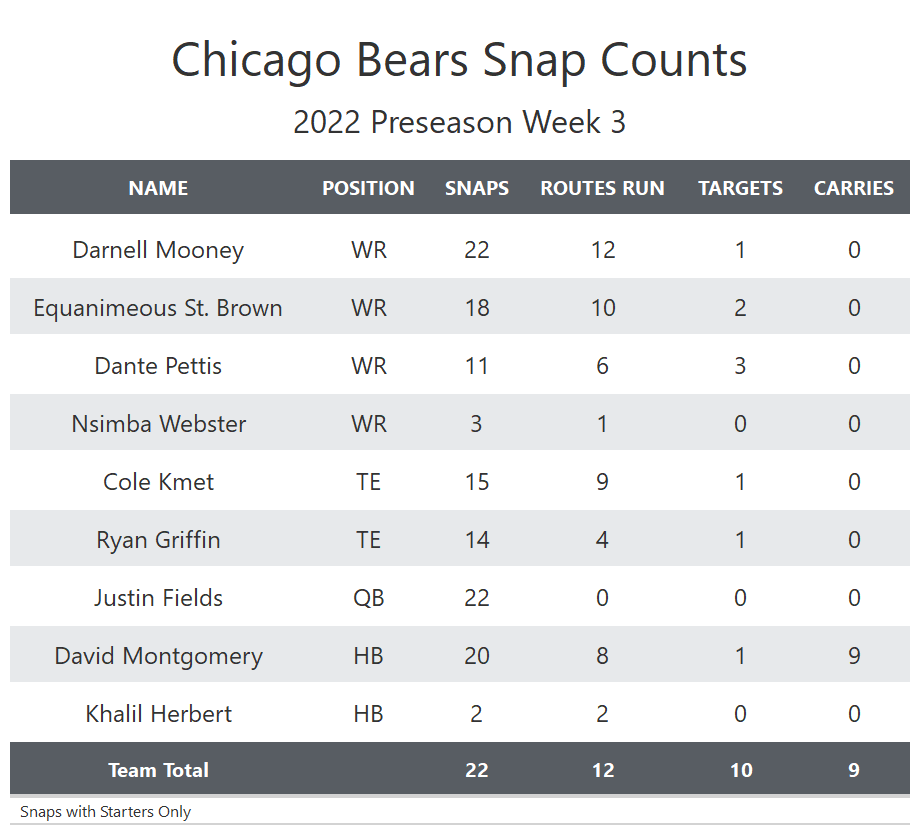 Demetric Felton is the Browns' starting slot receiver: The Browns used most of their starts, and Amari Cooper was the only notable wide receiver who had the day off. Felton was consistently the slot receiver ahead of rookie David Bell.

Monitor the Browns running backs: D’Ernest Johnson played all of the snaps with the first team while rookie sensation Jerome Ford didn’t see any time with the offense.

Move David Montgomery up your draft board: The Bears starting back saw his first preseason action. The Bears could have moved more to a two-man backfield, similar to what this coaching staff had with the Packers. Instead, Montgomery dominated the first-team snaps.

Don’t trust Cole Kmet as your starting fantasy tight end: Kmet played in less than 70% of Chicago's offensive snaps over the first four drives. He never played under 70% of snaps in a game last season. 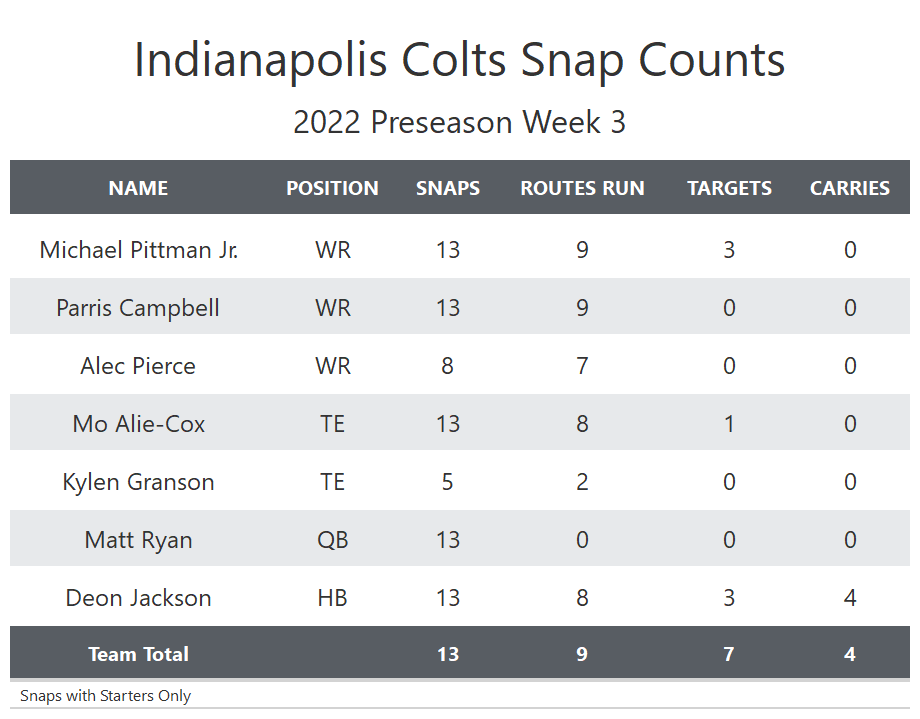 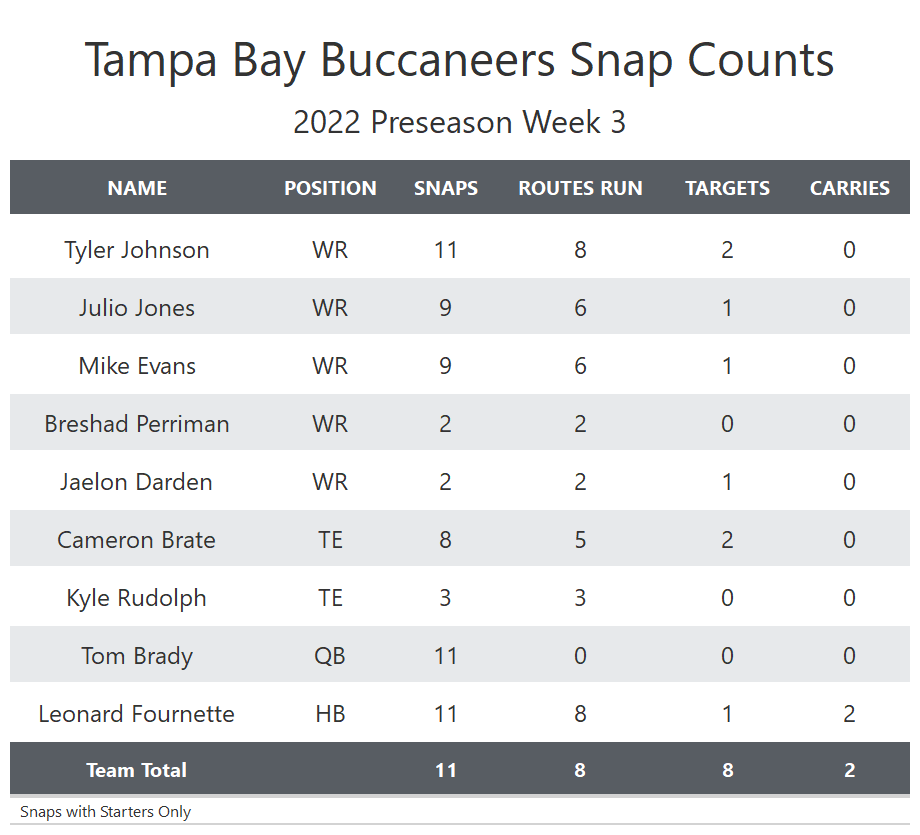 Slow the hype for Alec Pierce: Pierce had taken snaps in two wide receiver sets for the Colts last week with the starters over Parris Campbell, but the Ohio State product took those snaps over Pierce against the Buccaneers.

Monitor the Colts' tight ends: Mo Alie-Cox took every snap with the first-team offense. Typically, Indianapolis uses a three-man rotation with its tight ends, so this is a change from the norm.

If you draft a Buccaneers tight end, draft Cameron Brate: The Buccaneers played both of their tight ends for the first time this preseason, and Brate saw a clear majority of snaps. 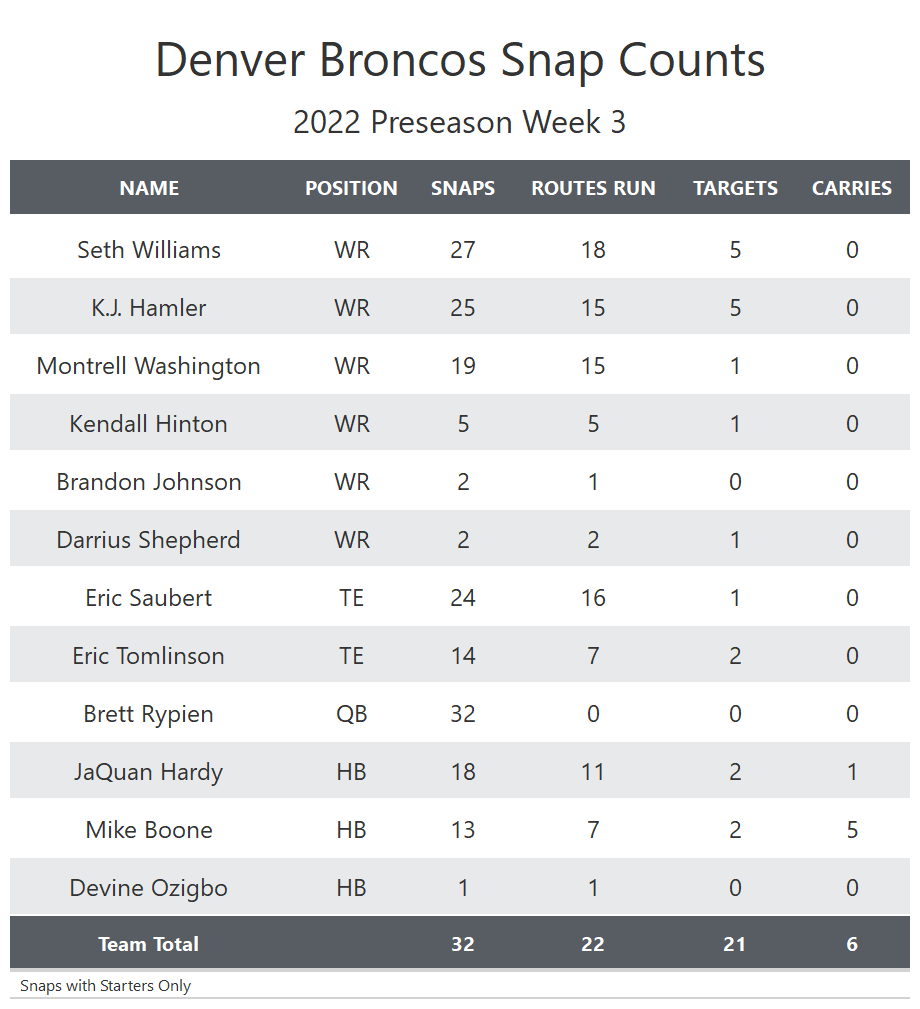 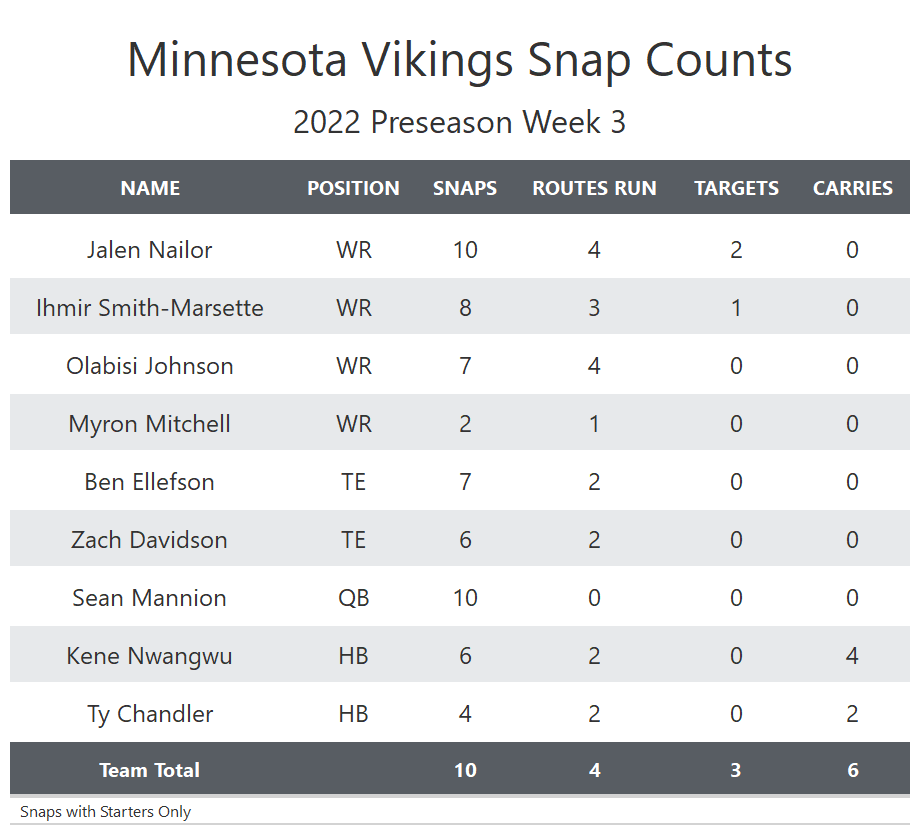 Albert Okwuegbunam is among the Broncos who did not play: Denver has rested its starters every preseason game. Okwuegbunam started and played into the fourth quarter in the first two but didn’t play Saturday night.

Ignore the Vikings' snap counts: The Vikings rested their starters and key backups, including everyone worth drafting in fantasy leagues. The only way any of the players who played today will be worth a spot on your fantasy roster is if there are multiple injuries.