• The New England Patriots were dealt with injuries to both WR Jakobi Meyers and HB Ty Montgomery.

• The Thursday recap has you covered for all of the fantasy football takeaways you might have missed. 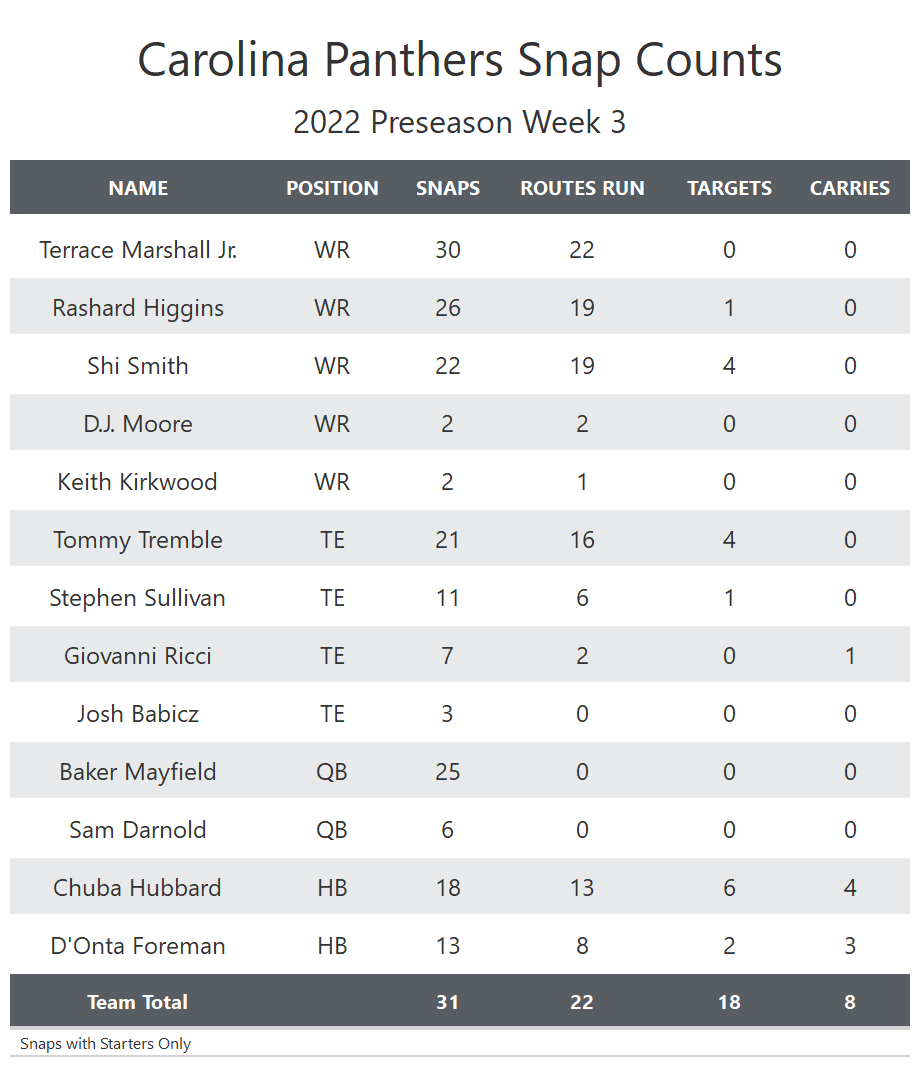 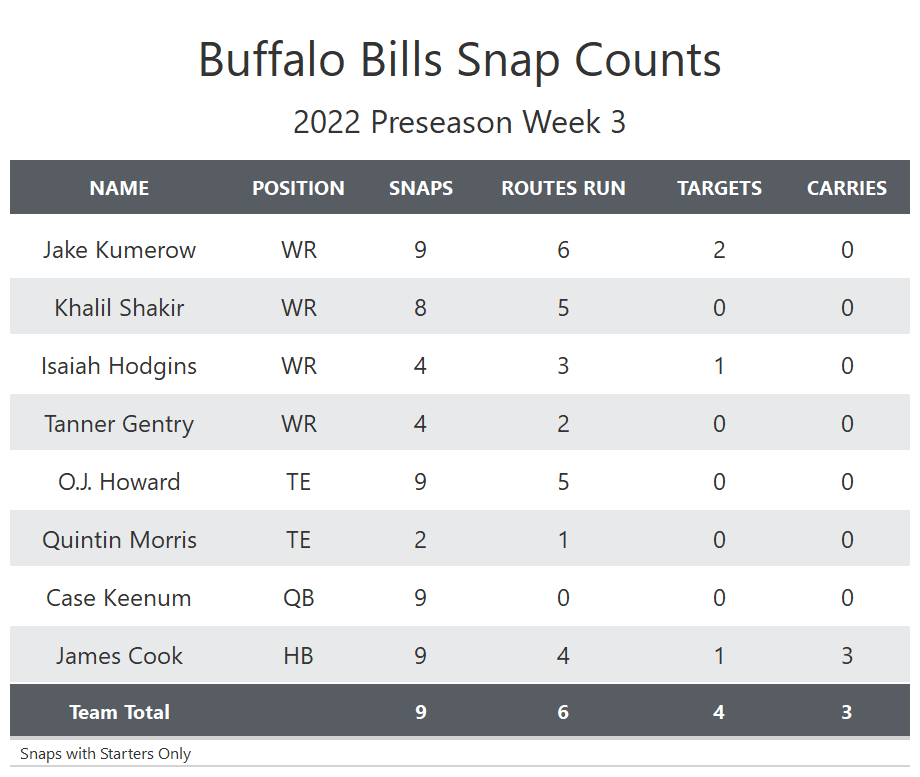 • Each of the backs has started for Carolina this preseason, with Hubbard starting against Buffalo.

• Both backs have rotated by drive rather than the situation. Both have been used primarily in the running game in years past, but they have been given receiving opportunities this preseason.

Panthers WR Shi Smith could finish fourth on the team in targets: Smith has consistently been the Panthers' slot wide receiver throughout the preseason. The 2021 sixth-round pick seems likely to maintain this role despite some bigger named backups on Carolina’s roster. He should only be drafted in deep leagues where you can start several wide receivers.

• D.J. Moore started the game but played only two snaps to give the backups more opportunities.

• Terrace Marshall Jr. made his preseason debut and started the game over Rashard Higgins. This suggests Marshall is higher on the depth chart.

• Higgins took over for Moore on the second play of the game.

• Smith has been the slot receiver with whatever combination of Panthers receivers the team has used throughout the preseason, making him the most likely to join Anderson and Moore in the starting lineup.

Don’t Forget About Jamison Crowder: The Bills rested several key players, including Crowder, which is an indication of how they still value him. While he won’t be in their starting lineup in Week 1, he can still be a contributor to the offense.

• The Bills used Isiah McKenzie out wide at times in their last preseason game. This means Crowder can play not just in place of McKenzie but in place of the outside receivers, too. McKenzie can move to the outside, with Crowder in the slot.

• This won’t be enough for Crowder to have fantasy value on a week-to-week basis, but if there is an injury to a starter, he can be started in fantasy leagues.

Understand the risks before taking James Cook: Cook has consistently been third on the Bills depth chart this preseason, making it unlikely he will be a fantasy contributor early in the season.

• Both Devin Singletary and Zack Moss were among the veterans not playing, allowing Cook to start against the Panthers.

• It’s clear Singletary will see a majority of snaps in Week 1, but it’s unclear how much he will get substituted out for the two backs.

• The Bills had rotated by drive rather than situation in the preseason, so it’s also uncertain if the backups will substitute by situation or by drive. 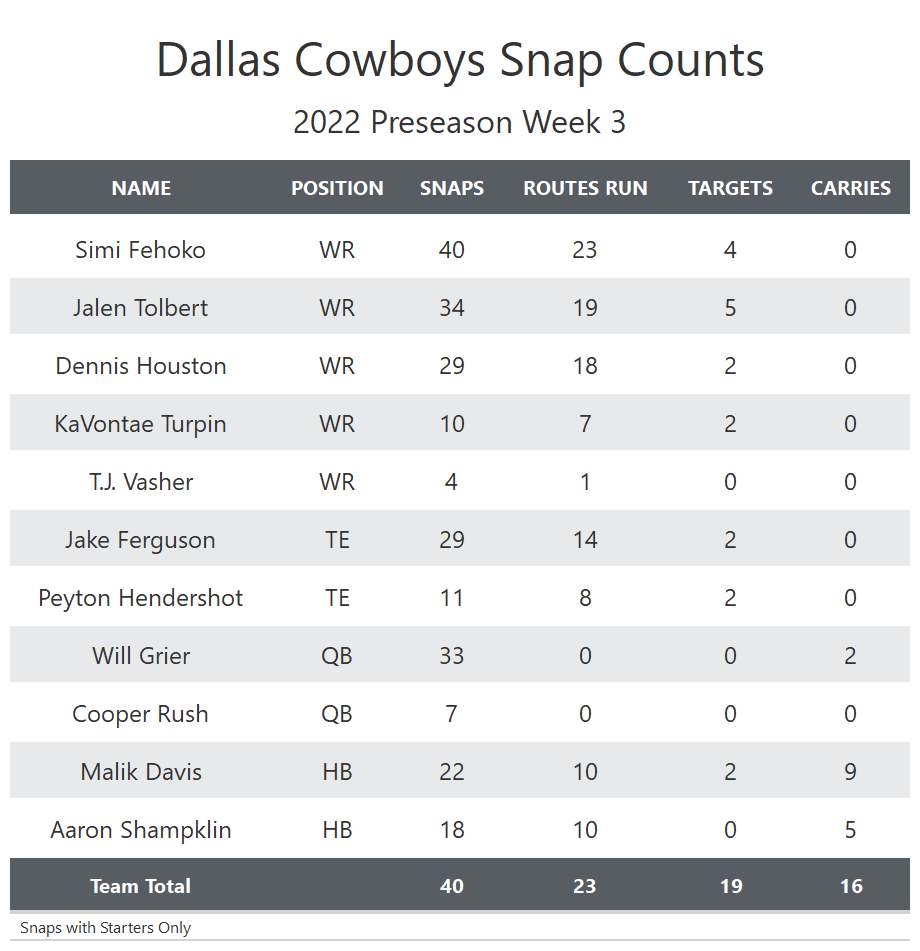 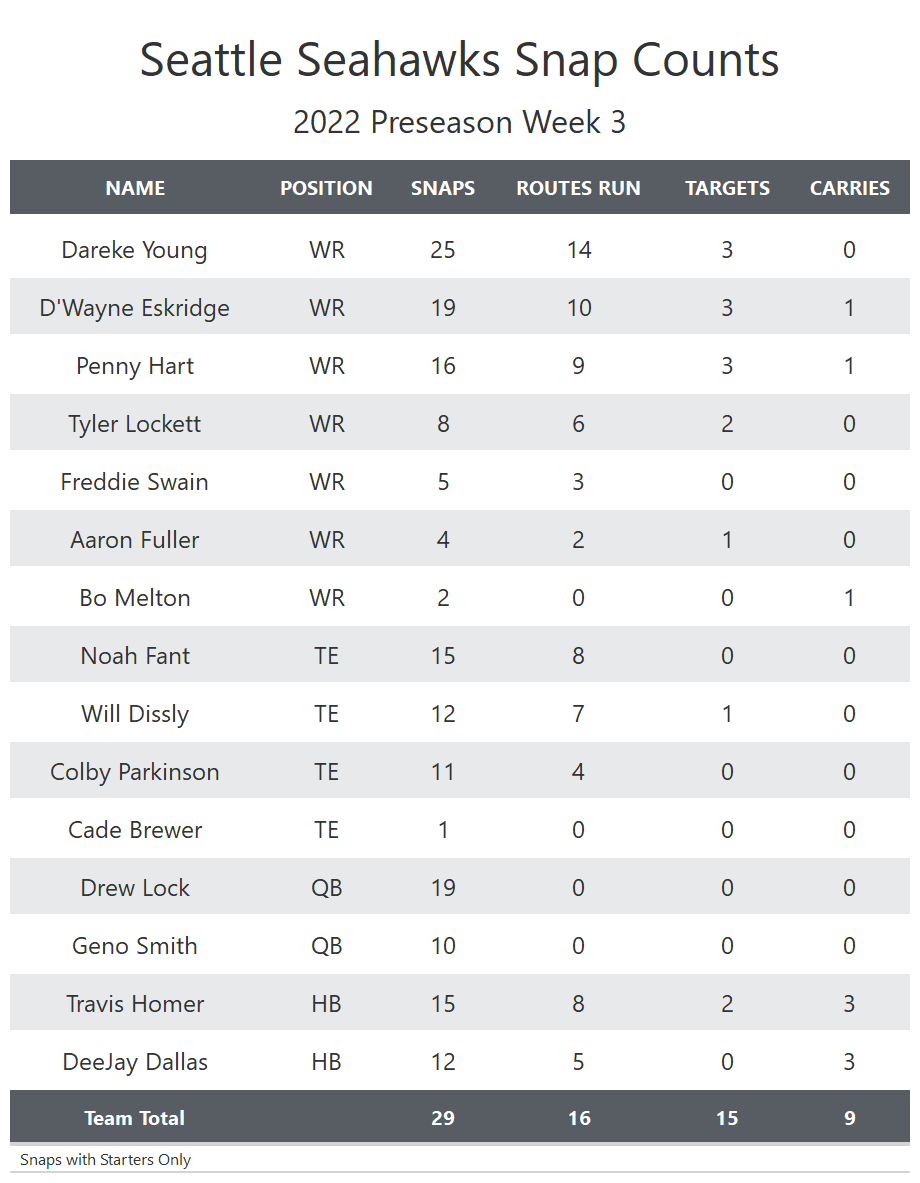 • CeeDee Lamb and Noah Brown have sat out all preseason as the starting outside wide receivers.

• Tolbert hasn’t played as much in clear run situations but was often in two-receiver sets in more pass/run neutral situations.

• Michael Gallup has been out injured but has historically been an outside receiver.

• James Washington is his top competition for snaps, but he’s also been out and is unlikely to win the job from Tolbert.

• Tolbert has run the most routes out of the slot in the first half of each preseason game.

Don’t Draft Noah Fant: The Seahawks continued to use a three-man rotation at tight end. None of them ran more than 50% of the team’s routes over the first five drives.

• Will Dissly started the game and took the majority of snaps over the Seahawks' first drive.

• The three tight ends were used interchangeably throughout the five drives.

Draft Dareke Young in deep leagues and dynasty leagues: The seventh-round rookie started the game with Tyler Lockett and D’Wayne Eskridge and led the starters in snaps. He could be the Seahawks' third wide receiver this season.

• Freddie Swain was the slot receiver for Seattle last season but didn’t rotate in until Seattle’s second drive, making Eskridge potentially the favorite in the slot.

• The Seahawks could use Lockett out wide or in the slot, and how much they use him in each spot could determine if Young or Eskridge sees more playing time. 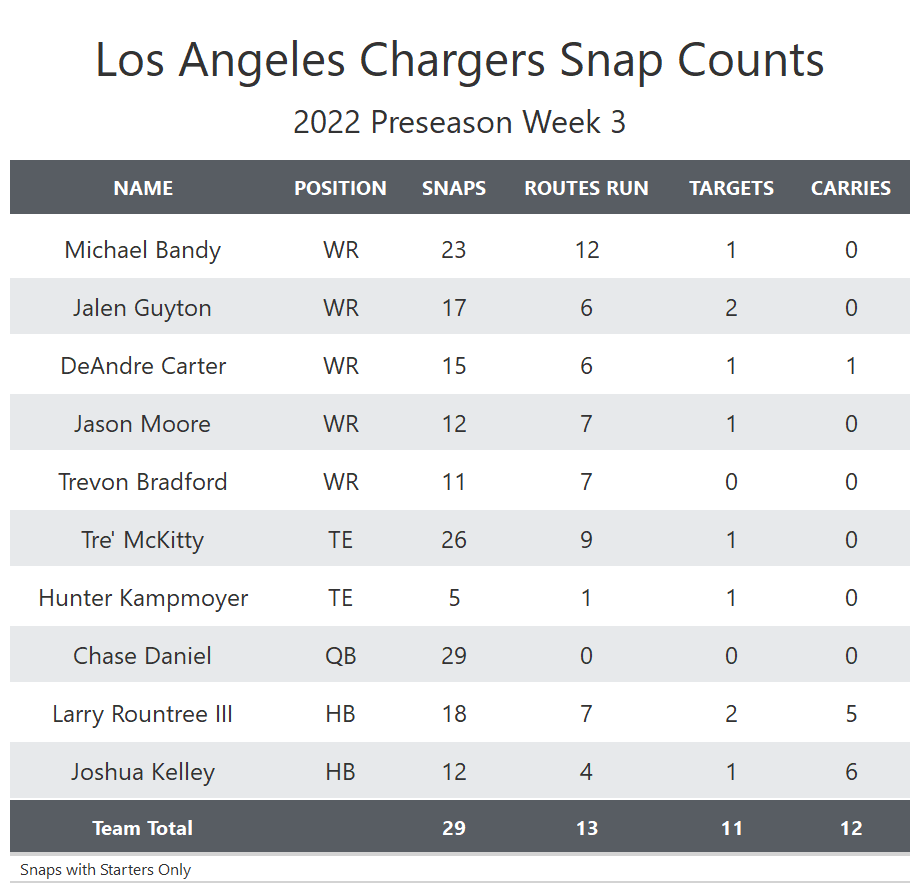 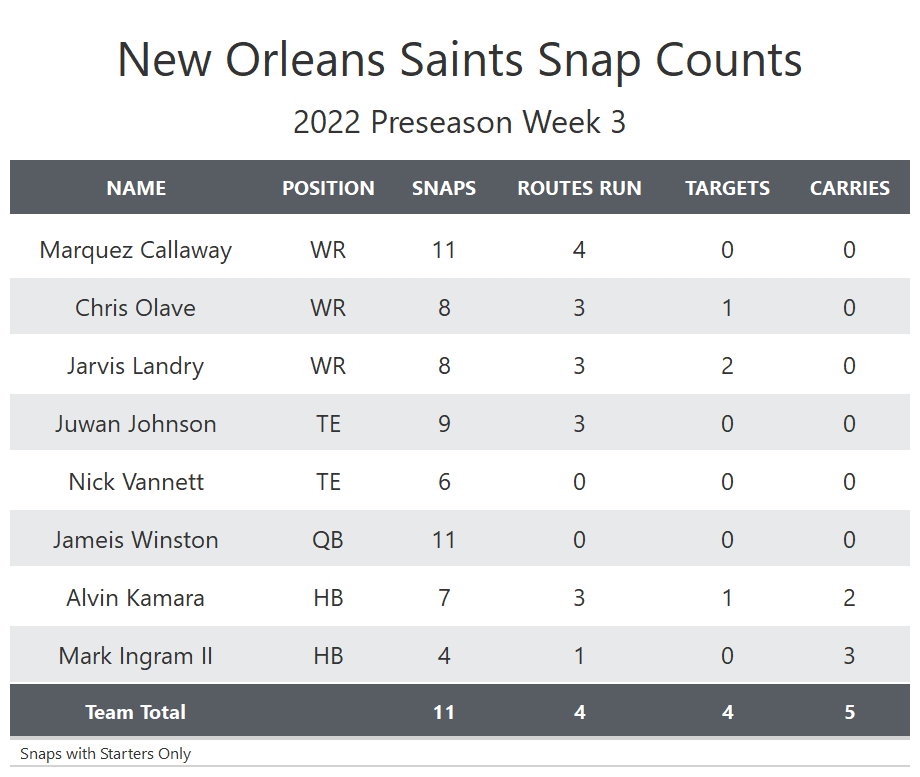 Avoid the Chargers' backup running backs: Larry Rountree III started tonight, unlike the previous two games Joshua Kelley started. Both players would receive some snaps if Austin Ekeler were to get hurt.

• The two players have rotated in and out significantly with the starters throughout the preseason.

• It’s unclear whether Rountree is now second on the depth chart or it was just his turn to receive the start.

• Fourth-round rookie Isaiah Spiller had been the third running back on the field over the first two preseason games. He missed tonight with an ankle injury that isn’t expected to be serious. He remains a clear fourth on the depth chart and is unlikely to provide any fantasy value early in the season.

• The Chargers backs rank last in my running back handcuff rankings.

Ignore the Chargers receivers tonight: The Chargers have consistently let their top few starters sit out in the preseason. Some players also missed tonight with injury, leaving little information to gain from this game.

• Joshua Palmer missed this game after coming out of the concussion protocol on Wednesday. There have been reports that he’s clearly ahead of Jalen Guyton on the depth chart, but there has been no evidence in preseason usage to support or refute this. Guyon played every snap on the first two drives and then only played in the third when the drive dragged on and the backups needed a break.

• Tre’ McKitty made his preseason debut after missing the last two games with a soft-tissue injury. He started the game but likely remains behind Gerald Everett and Donald Parham on the depth chart.

Slightly slow the hype on Chris Olave: Jarvis Landry and Marquez Callaway started the game for New Orleans, with Olave not playing until the fourth offensive snap. The rookie wideout might still be third on the depth chart, but Callaway is still a factor.

• Later in the drive, Olave joined Callaway in two-receiver sets with Landry on the bench.

• Callaway kept playing on the second drive, while Landry and Olave stopped playing with several other starters.

• Olave is expected to see extended playing time in the regular season, but it might not be as much as fantasy managers would like if Callaway is also rotating in.

• He will be just fine if Michael Thomas ends up missing extended time.

Ignore the tight end snap counts for the Saints: Juwan Johnson appeared to be the Saints’ clear receiving tight end, but that was only because Taysom Hill and Adam Trautman missed the game for undisclosed reasons. 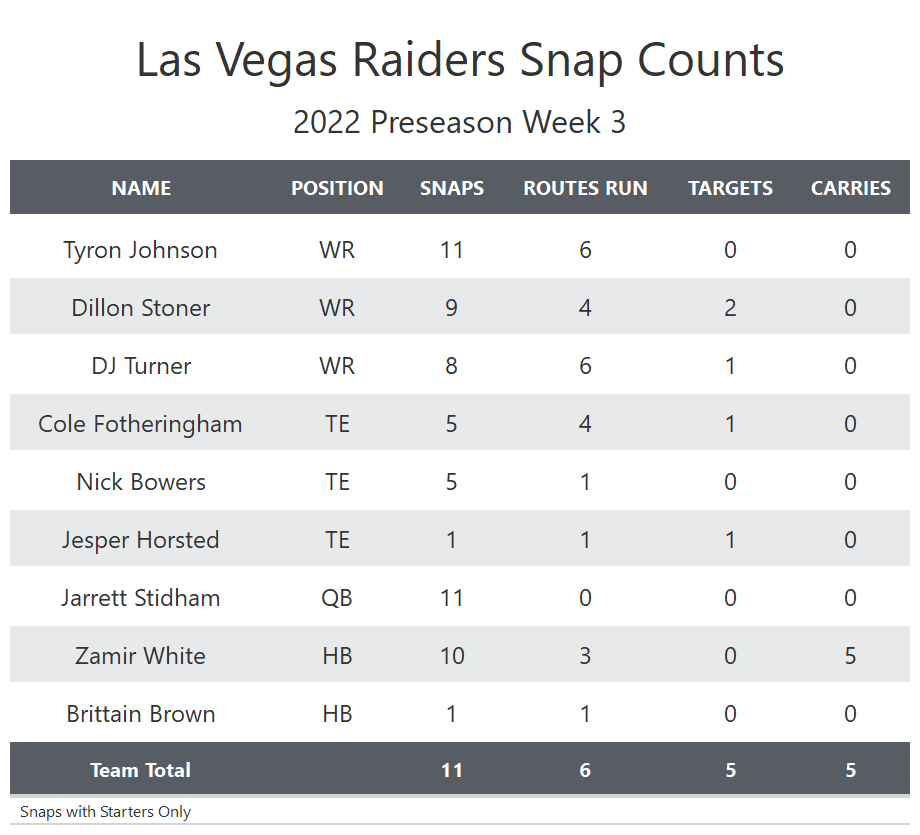 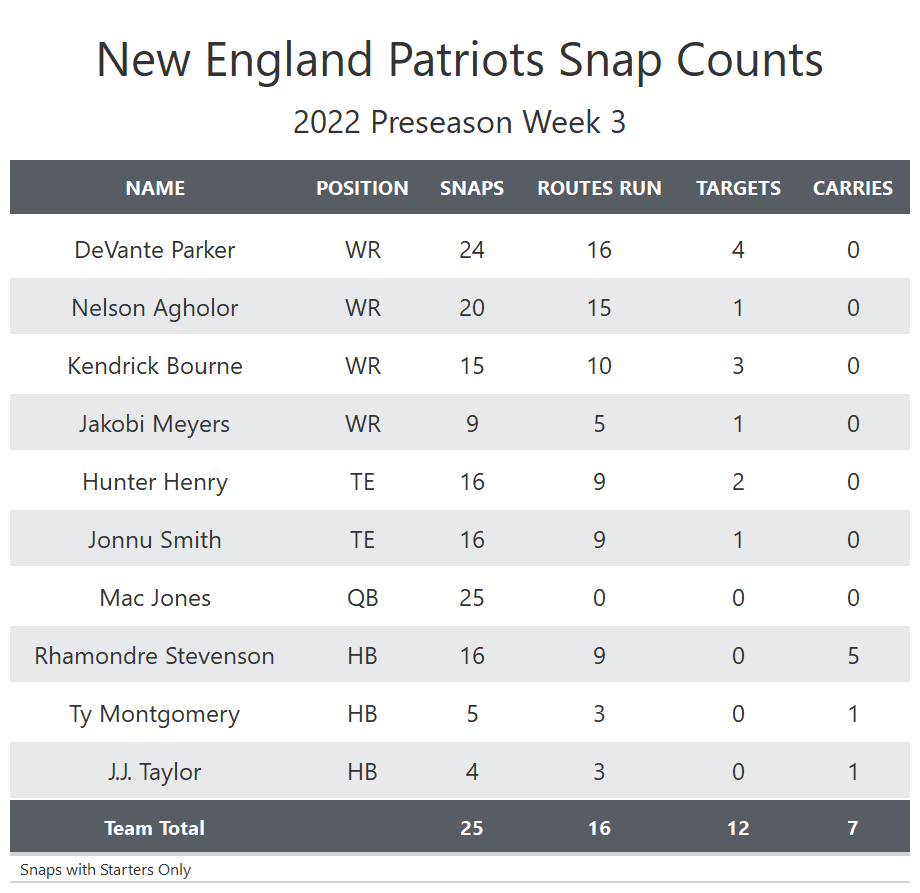 • Harris left the Wednesday practice early, which is likely why he didn’t play. However, he did dress up for the game, which is a good sign his injury isn’t serious.

• Ty Montgomery took the second drive but left the drive early on a cart. Ideally, the injury isn’t serious, but if it is, that would increase Stevenson’s odds of playing in passing situations by even more.

• J.J. Taylor took the third drive and remains ahead of both rookie running backs on the depth chart.

Monitor the Jakobi Meyers injury: Meyers started the game and played each of the Patriots' first nine offensive snaps before leaving for the blue medical tent. He was spotted on the exercise bike after. There is a chance he will be just fine and was being held out as a precaution.

• DeVante Parker joined Meyers in the starting lineup, with Nelson Agholor taking every snap in three-receiver sets when Meyers was still playing.

• Parker would be the clear Patriots wide receiver to draft if the Meyers injury is serious.

Buyer Beware of Hunter Henry: Henry finished TE8 last season by dominating the Patriots' tight end room in routes. In all, he ran 403 compared to Jonnu Smith’s 158. However, they split routes 50/50 against the Raiders

• There was a slight tendency for Henry to play on late downs and Smith to play on early downs.

• Henry hadn’t played in any preseason game prior to tonight.

Ignore the Raiders snap counts: The Raiders have typically rested their star players this preseason. Tonight they rested even more players than usual.

• Zamir White had won the third running back spot over Kenyan Drake, who was released. It would have been good to see White used on third and long, but Las Vegas wasn’t in that situation in their first two drives.