• Kansas City Chiefs RB Ronald Jones was the second running back to see the field for the Chiefs, slowing the hype for Isiah Pacheco.

• San Francisco 49ers RB Jeff Wilson Jr. got his first preseason action and made it clear that he’s the backup running back for the 49ers. 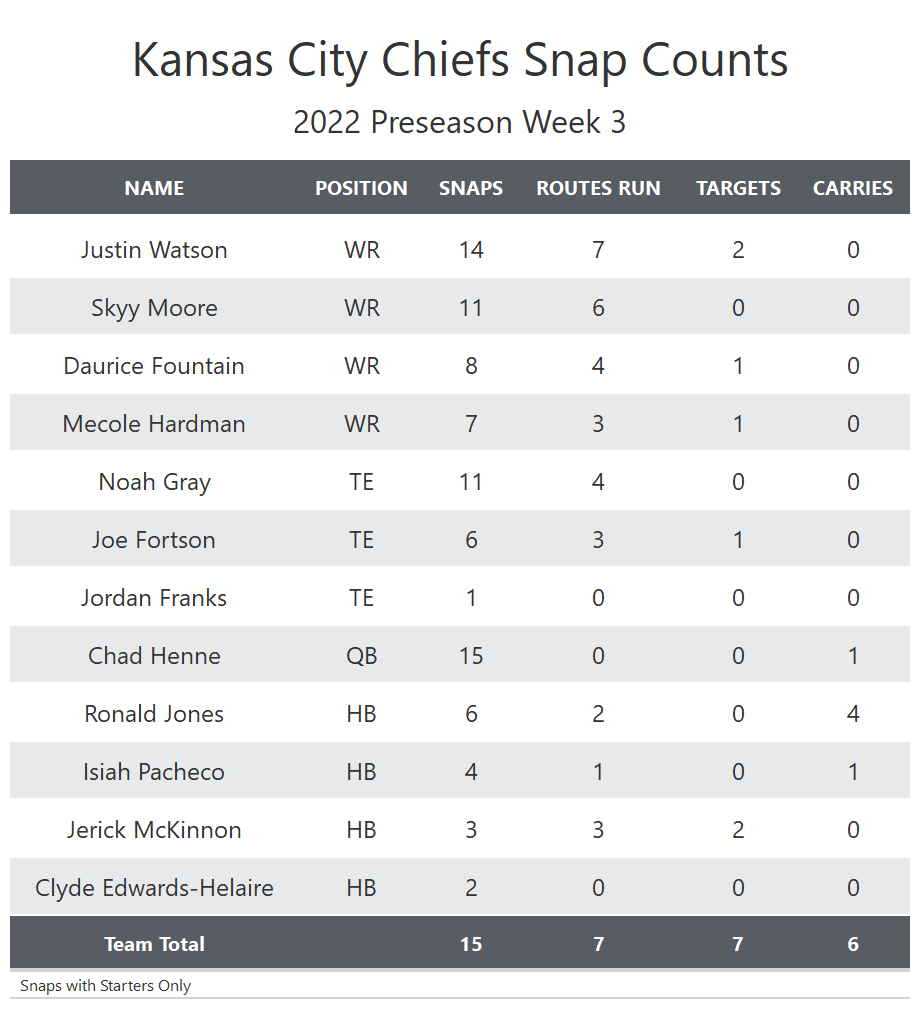 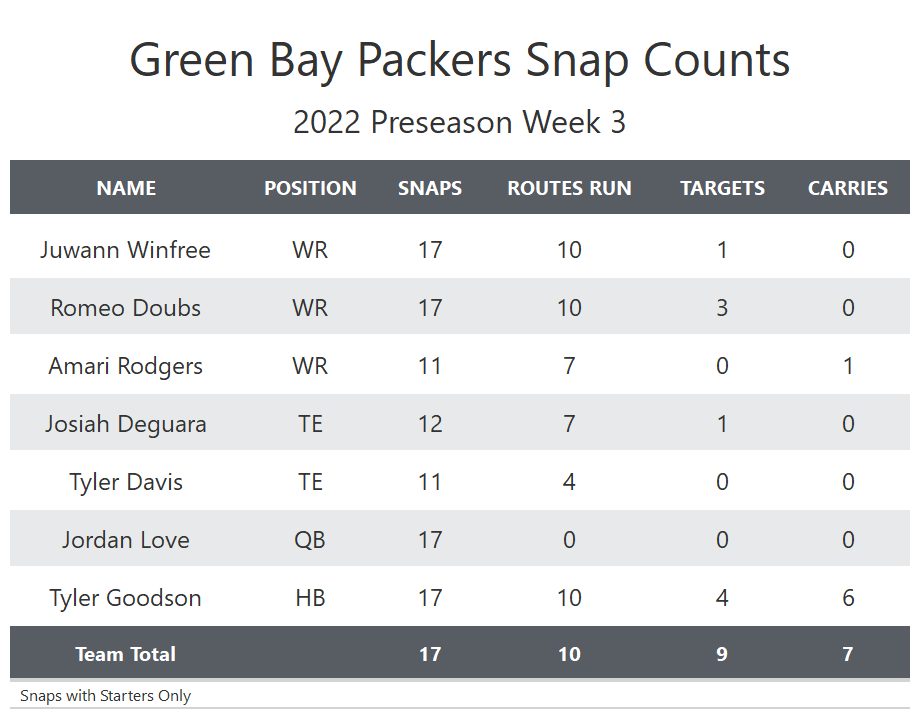 Draft Clyde Edwards-Helaire: He’s been the only constant for the Chiefs this preseason. He took the first three snaps and his night was done — he’s the clear starter for Kansas City.

• Jerick McKinnon didn’t play on early downs, but he handled every third down on the first two drives. His role as the third-down back appears secure.

• Unlike the first two preseason games, Ronald Jones was the next man up on early downs instead of Isiah Pacheco. All four backs will likely make the roster. Pacheco still has upside, but his value should drop significantly knowing Jones is still a factor.

Mecole Hardman remains a clear WR3, Skyy Moore WR5: The Chiefs rested their top two wide receivers, while Hardman played the first eight snaps before his night was called to a close. Moore started the game but only played in three-receiver sets.

• Justin Watson remains WR4, playing all but one snap with the first team. He’s worth a late-round flier.

• Moore also stopped playing when the rest of the Chiefs starters stopped playing, so at least there is a clear gap between him and the wide receivers below him. He should definitely still be drafted, but don’t expect him in your fantasy starting lineup in September.

• Josh Gordon appears to be WR7, making him unlikely to make the 53-man roster.

Draft Romeo Doubs: The Packers haven’t played their starters all preseason and have given Doubs a chance to shine. He was taken out earlier in this game compared to previous weeks, showing the Packers are happy with him currently.

• Doubs will likely start the season as WR4 behind three veterans but should be given every opportunity to move up the depth chart.

• Second-round rookie Christian Watson has not played at all this preseason due to injury, making it less likely Watson will contribute early in the season. 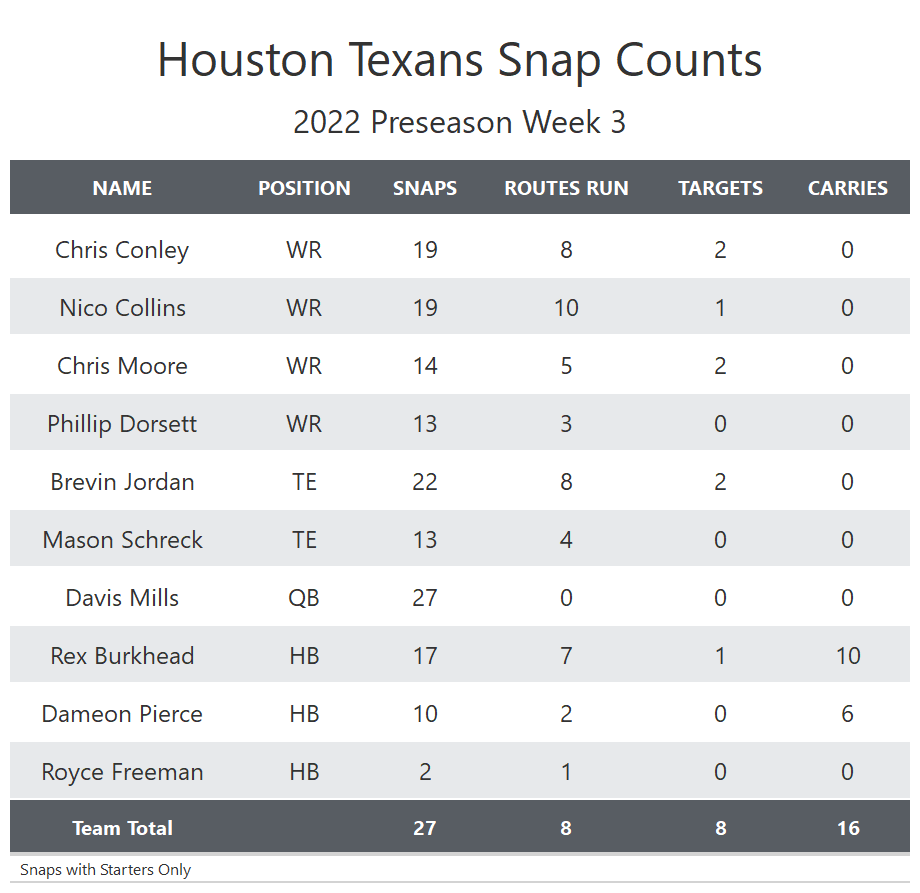 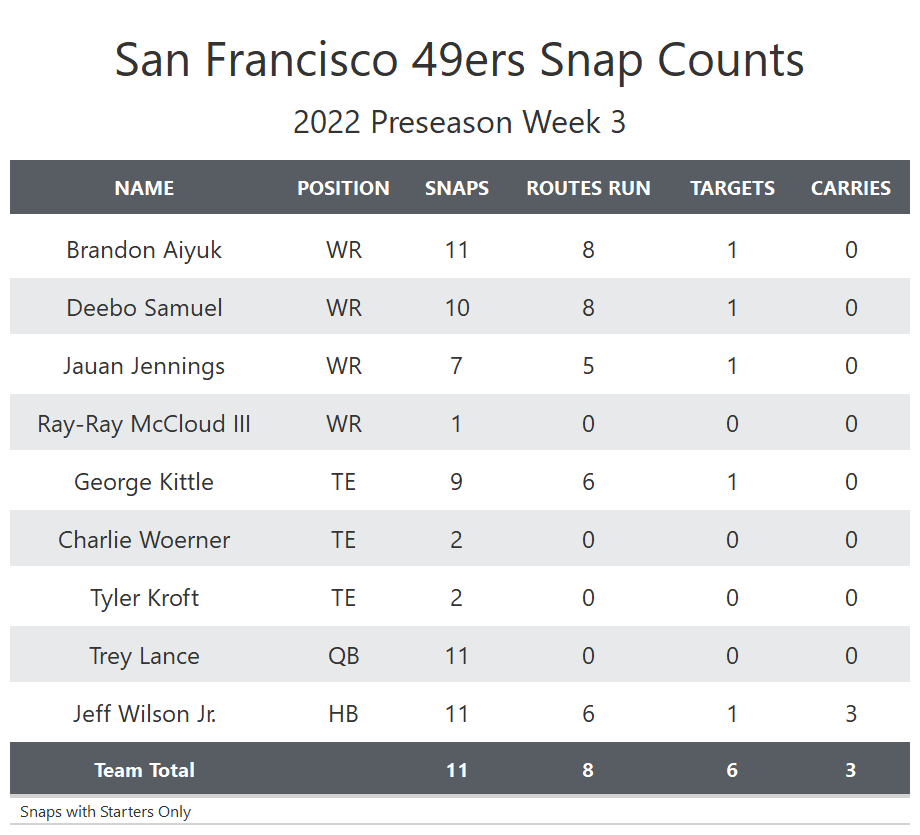 Draft Dameon Pierce: The fourth-round rookie started the game for the Texans, playing every first and second down and even third-and-short on Houston's first drive. He could lead all rookie backs in carries this season.

• Pierce was the presumed starter after he didn’t play last week, as he was treated like one of the stars and given a day off.

• He earned the highest grade among running backs the first week of the preseason.

• Rex Burkhead took every third-and-long and was also the running back on early downs for the second drive. He is the handcuff instead of Marlon Mack, as Mack didn’t start playing until the second half. Burkhead is worth a late-round pick, while Mack should no longer be drafted.

Treat Jeff Wilson Jr. as the handcuff in San Francisco: Trey Sermon had served as the starting running back the last two games, but Wilson started this week and took every snap on the first two drives. He’s the favorite to take snaps on third downs and should be Elijah Mitchell’s backup.

• Sermon took over on the third drive and took every remaining snap while Trey Lance stayed in the game, including third-and-long snaps. He continued to play even after Lance’s exit.

• Kyle Juszczyk played only the first two snaps on offense before his night was done. There is a chance he could remain the third-down back, as he was for parts of last season.

• Undrafted rookie Jordan Mason was the next man up after Sermon. It will be difficult for him to make the 53-man roster.

• Third-round rookie Tyrion Davis-Price has typically been fourth on the depth chart while rotating in but wasn’t used that way tonight. That could be bad news, or it could simply be the 49ers giving players on the roster bubble a chance to play.

Draft the 49ers Skill Players: The 49ers played their starting receivers for the first time this preseason. They were used identically to last season.

• Jennings received most of the slot snaps, but all three receivers took multiple snaps there.

• George Kittle played the majority of snaps at tight end, including a few snaps in the slot.