Leverage PFF’s Week 9 fantasy football rankings and DFS ownership projections as close to lock as possible. Knowing what your competitors are going to do ahead of time provides an edge that simply not enough DFS gamers take advantage of. Also, be aware of the GPP-contests you are playing. Take a look at the winner’s lineup each week and take note of the roster construction.

Last week's process led to us playing Matthew Stafford/Josh Allen in tournaments while fading Justin Herbert due to a coverage scheme disadvantage. Joe Mixon was a strong play in GPPs against a bottom-dwelling New York Jets defense. And the Michael Pittman Jr. and A.J. Brown skinny stack was a staple component in winning lineups.

Related content for you: Week 9 WR/CB mismatches and shadow coverages to leverage in DFS & fantasy football leagues via Ian Hartitz

In terms of matchups that are projected to be high-scoring based on the offensive pace of play: Minnesota Vikings-Baltimore Ravens, Buffalo Bills-Jacksonville Jaguars and Carolina Panthers-New England Patriots rank above the rest on the main slate. 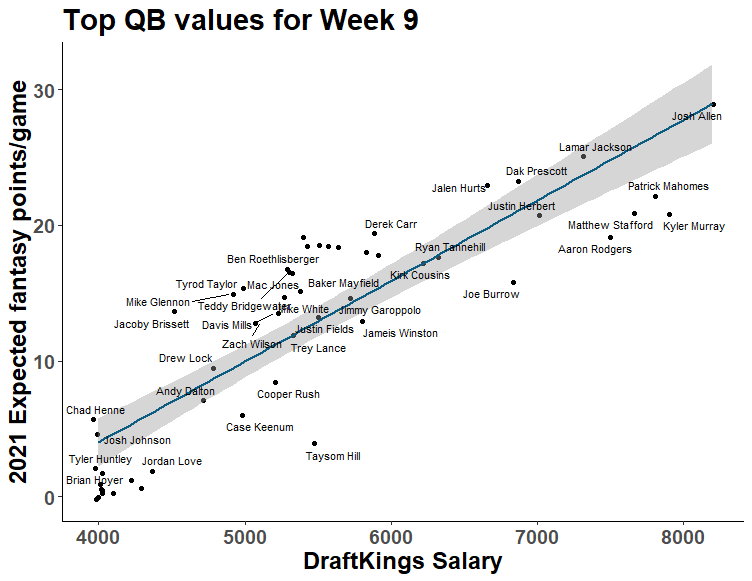 I’m breaking my cardinal rule in cash formats, as I'm not going immediately back to Jalen Hurts ($6,900) even though the Philadelphia Eagles quarterback has been a top-12 overall finisher in his 10 full games as an NFL starter. Last week, he only played three quarters and attempted 14 passes, which contributed to just 11.2 fantasy points. He did, however, still rush for 71 yards. His rushing equity — 50-plus rushing yards per game — is second to only Lamar Jackson — 69 rushing yards per game — and the major reason why he has been bulletproof in cash games

Patrick Mahomes has scored 10.2 fantasy points under expectation over the last two weeks — second-most by any quarterback and a tell-tale sign that better days are ahead for the prolific passer. It’s only a matter of time until Mahomes gets the Chiefs offense back on track.

Justin Herbert ($7,000) has endured back-to-back subpar performances, and the latest came against the New England Patriots. As I wrote in the Week 8 DFS Cheat Sheet, there were concerns about how the Chargers quarterback would stack up versus New England’s Cover 1 defense. And those concerns were realized, as Herbert went just 3-for-8 for 20 yards and two interceptions when the Patriots aligned in Cover 1.

However, Week 9 presents a more favorable matchup for Herbert, as the Eagles play Cover 1 at the second-lowest rate in the league. Instead, they rely heavily on zone coverage, specifically Cover 3 and Cover 6.

Versus those coverages this season, Herbert is PFF’s 11th highest-graded quarterback (77.9).

Kirk Cousins ($6,200) should not be overlooked in tournaments. There’s a strong chance that Minnesota-Baltimore becomes a shootout, as Cousins looks primed to shred the Ravens’ Cover 1 and 3 base defense. The Vikings passer owns PFF’s third-highest grade (90.0) when facing those schemes. He's a smart play at just 2.6% projected rostership.

Tagovailoa ($5,800) gets a plus-matchup this week versus the Houston Texans, and his 25.4 expected fantasy points per game over the past three weeks ranks No. 3 in the league.

When Hill ($5,500) started last year, he posted the league’s highest adjusted completion percentage (83%) and performed admirably within the structure of the New Orleans Saints‘ offense. For fantasy purposes, he was a revelation.

The tight-end-turned-quarterback averaged 22.6 fantasy points per game — sixth-best over that time. And his rushing production — 209 yards and four touchdowns — massively boosted his numbers. With Hill starting, his rushing upside alone makes him a potential top-12 option at the position.

Hill also matches up favorably against the Atlanta Falcons, who rank fifth in fantasy points allowed to quarterbacks.

Play Love because of his dirt-cheap $4,400 salary, as he can open up a ton of salary relief to spend on other positions. He also has a great matchup, as the Kansas City Chiefs are the second-worst defense versus quarterbacks this season.

PFF’s fantasy projections have Love slated as the fantasy QB6 because of the matchup and having Davante Adams/Aaron Jones at his disposal. 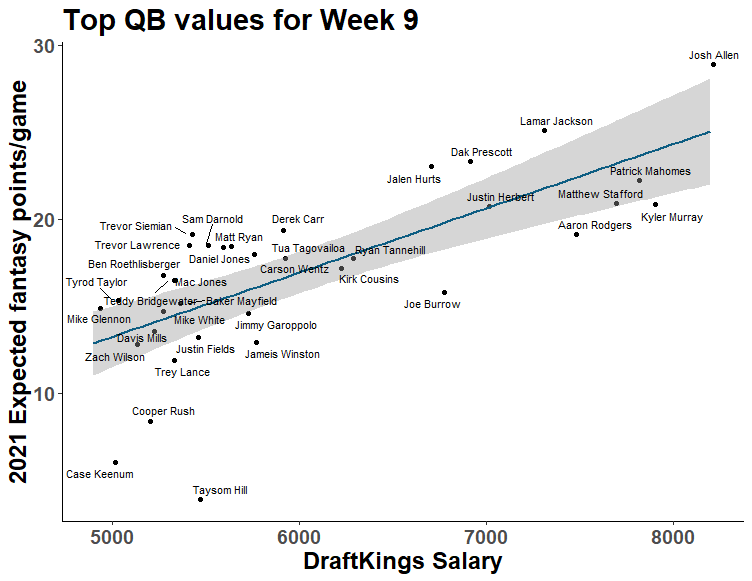 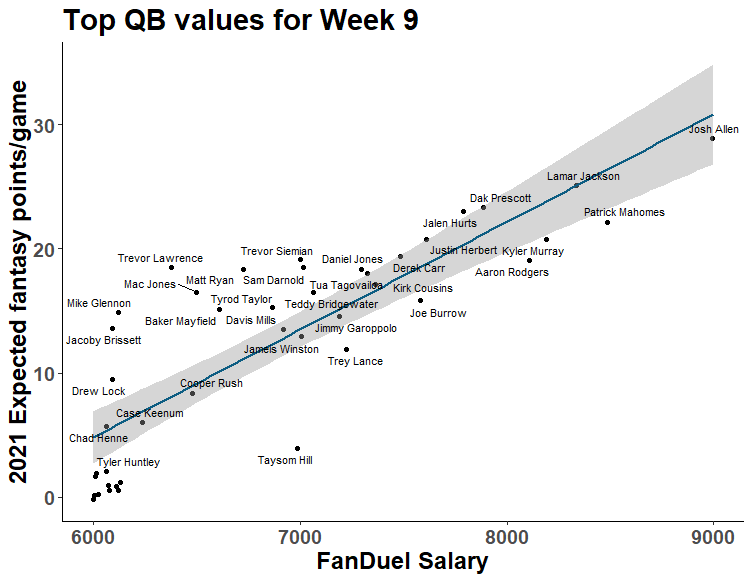