Leverage PFF’s fantasy football rankings and DFS ownership projections as close to lock as possible. Knowing what your competitors are going to do ahead of time provides an edge that simply not enough DFS gamers take advantage of. Also, be aware of the GPP-contests you are playing. Take a look at the winner’s lineup each week and take note of the roster construction.

Related content for you: Week 8 WR/CB mismatches and shadow coverages to leverage in DFS & fantasy football leagues via Ian Hartitz

Using a mid-priced quarterback with relatively high expected fantasy points per game has been the leading indicator of the next GPP-winning quarterback, especially when they are facing an opposing quarterback who also fits similar criteria.

In terms of matchups that are projected to be high-scoring based on the offensive pace of play, Bills-Dolphins, Panthers-Falcons and Browns-Steelers rank above the rest on the main slate. 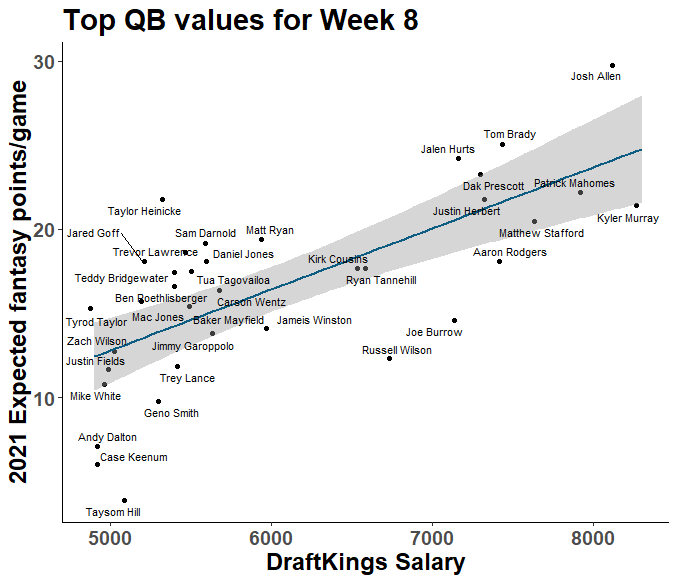 Per the norm in cash formats, it's all about going back to Hurts at $7,200. The Philadelphia Eagles quarterback has scored at least 21 DraftKings fantasy points in every game he has played, and he’s been a top-12 overall finisher in his 10 full games as an NFL starter. Hurts is basically bulletproof in cash formats because of his rushing equity — 50-plus rushing yards per game.

The Detroit Lions offer the best matchup for quarterbacks, per PFF’s strength of schedule tool.

But in tournaments, we are paying up to $8,100 for the fantasy football leader in fantasy points and expected fantasy points per game — by nearly five points — Josh Allen. No team has allowed more passing yards (334 per game) over the last four weeks than the Miami Dolphins.

The New England Patriots defense ranks 31st in passing yards allowed over the last four weeks, so they are going to have their hands full trying to contain Los Angeles Chargers quarterback Justin Herbert. The $7.3K-priced passer is the QB9 in fantasy points per game this season.

The case against Herbert is that he doesn’t project super favorably against New England’s Cover 1 defensive scheme. The second-year quarterback’s 65.0 PFF passing grade versus Cover 1 ranks 20th out of 32 qualifying passers.

It’s worth finding the salary to move up slightly for Matthew Stafford ($7,600), as the Houston Texans rank 29th in explosive pass-play percentage faced this season.

Tom Brady also deserves an honorable mention because Antonio Brown might miss the game, which sets up Brady double-stack with Chris Godwin and Rob Gronkowski — who will be making his return to the lineup — in GPPs. Mike Evans is not likely to repeat his efforts from a week ago with cornerback Marshon Lattimore drawing his coverage. Lattimore held Evans to one catch on six targets while in primary coverage during the three Saints-Bucs games last year.

Carson Wentz and Matt Ryan are my two main targets priced below $6K.

Ryan has been extremely effective over his past three games, averaging 23.7 fantasy points and 21.4 expected fantasy points en route to PFF’s No. 1 passing grade (93.0). Anticipate his hot streak to continue with a fading Carolina Panthers defense up next. The Panthers have allowed the second-most fantasy points to quarterbacks over the past four weeks.

Wentz has been severely underrated as a fantasy quarterback option this season, scoring at least 17 fantasy points in all but one of his seven starts. Over his past four games, he’s the QB14 with 20.4 fantasy points scored per game. He also ranks third in the NFL in passer rating.

He should produce against the Titans, who have allowed the fifth-most fantasy points per game to quarterbacks. 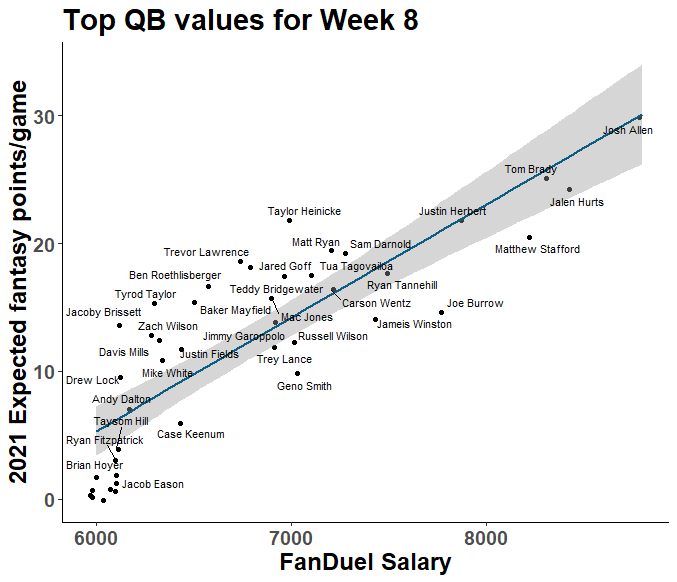