Oakland, CA, USA; Kansas City Chiefs running back Spencer Ware (32) is congratulated by running back Damien Williams (26) after rushing for a touchdown against the Oakland Raiders in the third quarter at Oakland Coliseum. Mandatory Credit: Cary Edmondson-USA TODAY Sports 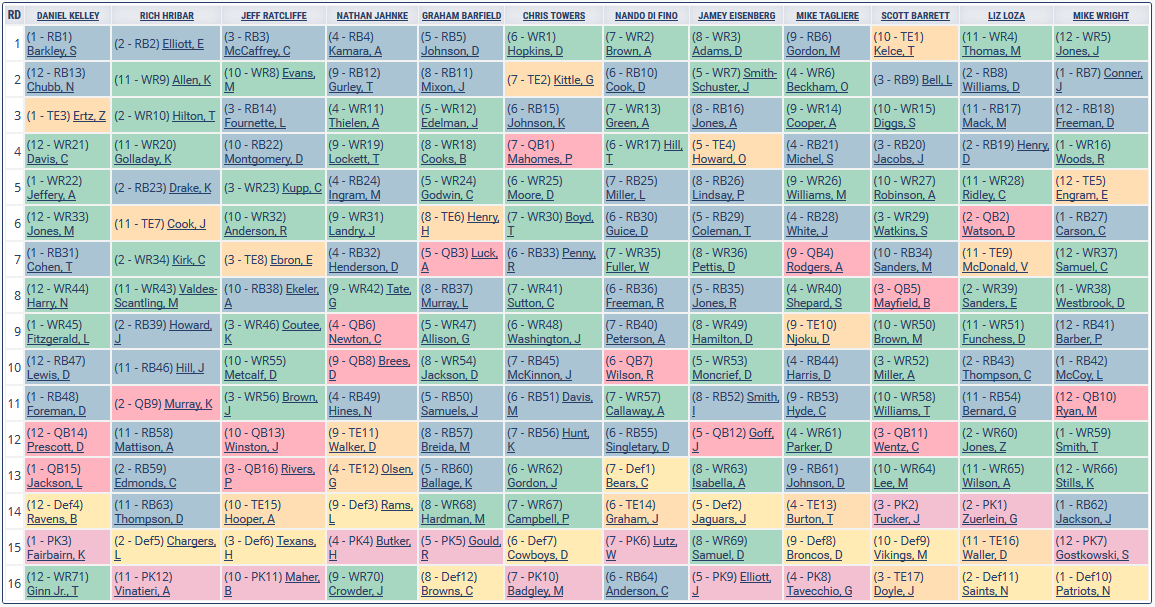 It’s a small lesson here, but maybe the main takeaway from the first round is that we shouldn’t expect a lot of surprises near the top of drafts this year. The biggest surprises I can drum up out of these results are:

If anything there shocks you, your threshold for shock is pretty low. You know your league better than anyone else, of course, but you probably shouldn’t expect much wild and crazy at the top of drafts this year.

On the other side of the depth coin, if you’re looking for waiver fodder at running back, it will be from someone unexpected. There’s not much here.

There is available production at the wide receiver position, but for 2019, it’s all low-upside. Anyone with a real ceiling got snapped up.

Tight end is similar to quarterback in number of players drafted (17 compared to 16) and the fact that the names left available are similar to the last ones drafted (Andrews, Reed, and company aren’t that different from Austin Hooper, Jimmy Graham, or Darren Waller). It’s different in that the available quarterbacks could all make an argument for being upper-tier quarterbacks. At tight end, there’s a big battle to finish at (say) eighth or ninth.

Whatever you do, don’t call this “zero-RB” on Twitter; I did that and got all sorts of “If Kerryon Johnson was drafted, it’s not zero-RB” from people who are pedants. I would argue that taking only one running back before the eighth round and even him in the third is as close to zero-RB as it makes sense to go these days. Either way, CBS’ Chris Towers looked elsewhere for most of the top of his roster, getting arguably the No. 1 quarterback, No. 1 wide receiver, and No. 2 tight end, and plenty of receiver depth before getting running backs in the eighth, 11th, 12th, and 13th rounds. This team will need at least one of these secondary backs to pop in a big way, but if Rashaad Penny can overtake Chris Carson, or if Jerick McKinnon can overtake Tevin Coleman, or if Kareem Hunt gets a big role after suspension, the rest of his team is rock-solid.

As mentioned earlier, 16 quarterbacks went in this draft. The last four, comprehensively, make up these two rosters. Both Jeff and I adopted his “upside and safe” quarterback strategy, with Dak Prescott and Philip Rivers presenting relatively safe options and Lamar Jackson and Jameis Winston both offering big upside. We each only took one non-RB/WR earlier (my Zach Ertz in the fourth round; his Eric Ebron in the eighth) and loaded up on the other positions otherwise. The depth at quarterback proves you can wait a long time and still get strong passers.

If you ignore the K/DST-heavy 15th and 16th rounds, The Athletic’s Nando Di Fino took a tight end as late as he reasonably could have, grabbing Graham as his lone man at the position in the 14th (yes, he drafted a running back in the 16th, but the general point remains the same). There are classes at tight end — the three at the top (Kelce, George Kittle, Ertz) and the next three (O.J. Howard, Hunter Henry, Evan Engram). If you miss those runs, the approach here of just punting on the position and taking someone late means you’ll still have a shot at the aforementioned available names like Andrews and Reed if Graham struggles again. You could argue that’s a better move than just taking a “meh” option four or five rounds earlier.

If Le'Veon Bell, Josh Jacobs, and Miles Sanders are all bell cows or similar in 2019, PFF's own Scott Barrett is set. But those three — a veteran off of a missed season and two rookies, including one in Sanders who is in an absolutely jam-packed backfield in Philadelphia — are the only three backs on his roster. Scott is extremely deep everywhere else, but that's a risky backfield.