Now that the major pieces have re-sorted in free agency, we have a good idea of the locations for veteran players and can start to piece together what their 2020 seasons will look like. PFF's Jeff Ratcliffe has had his fantasy rankings ready for awhile now, and we’ve added fantasy projections, which leverage the modeling capabilities of Eric Eager and our research and development team. This series of articles, starting with running backs, will go through the top fantasy players by best ball ADP and compare their relative positional value according to our rankings and projections.

It’s not intuitive, but projections and rankings aren’t interchangeable. Each provides valuable insight but through different methods. Our projections are based on a combination of model-based efficiency projections and analyst-informed share assumptions. Rankings are informed by projections, but the former combines more nebulous effects like upside, floor and contingency value that are more difficult to model.

[Find a full collection of analysis and insights on PFF's 2020 fantasy football projections for all 32 NFL teams. Check back as more articles will be added each day.]

Below, I’ve visualized the top 36 fantasy running backs by current ADP, contrasting their ranks by ADP, PFF rankings and PFF projections. Often, our rankings and projections are in agreement about the valuation of players relative to ADP, identifying players who should be prioritized or faded in drafts. What we find are some substantially misvalued players, and the visualization provides an easy way to judge the magnitude of the differences in rankings. 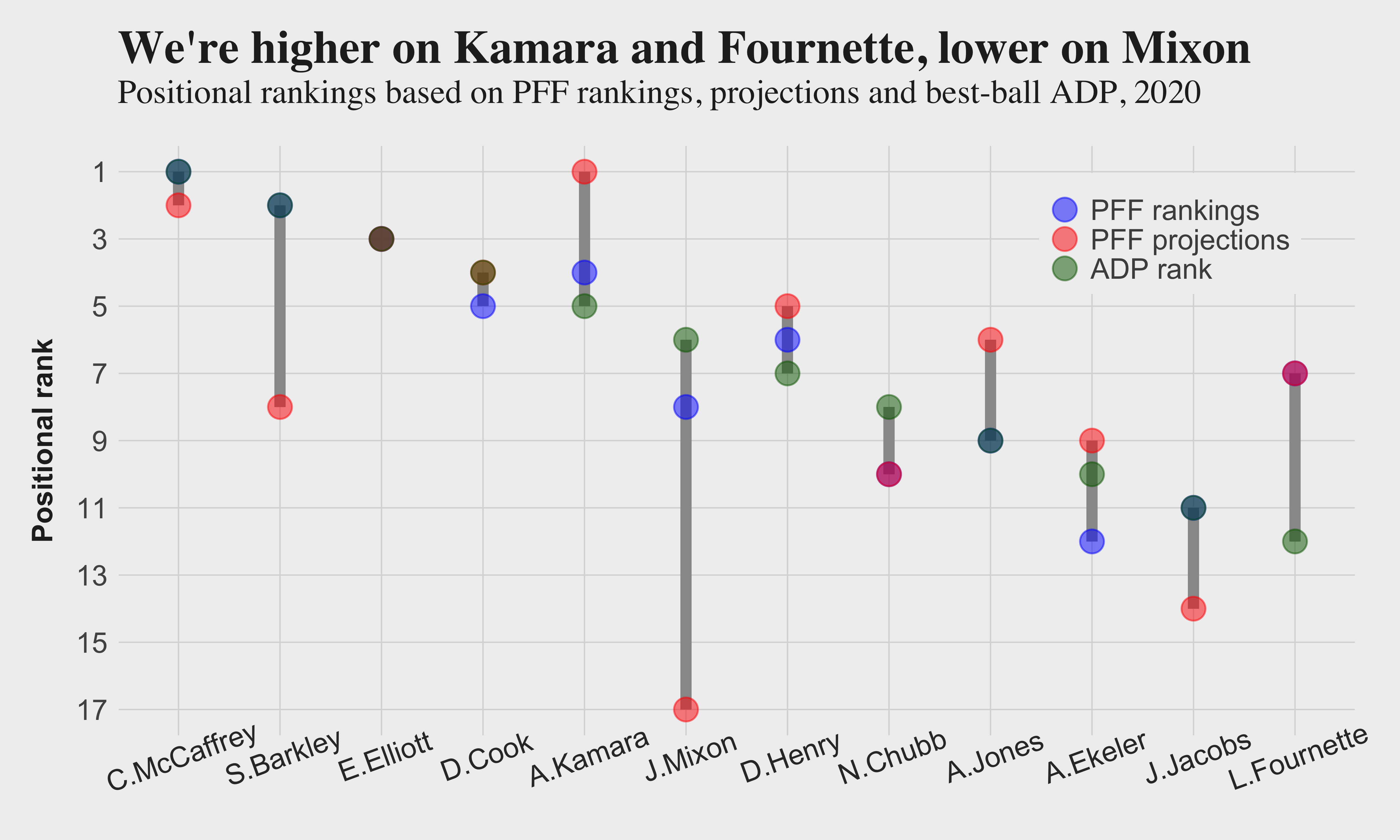 For potentially undervalued players, Alvin Kamara jumps out. His RB1 ranking according to our projections is a good illustration of why projections shouldn’t be the basis of fantasy drafting. His projection is driven by efficiency assumptions that boost mean projection, but this isn’t discounted for the fact that workload concerns lower his upside versus players like Christian McCaffrey and Ezekiel Elliott. That said, our rankings also see Kamara a spot higher than his RB5 ADP, which could be subject to recency bias after an “off” year in 2019. Kamara played roughly the same number of snaps per game versus 2018 and could see positive regression, especially in the touchdown department, in 2020.

Saquon Barkley is on the other side of the value coin. Our rankings agree with fantasy drafters that Barkley should be the second running back taken, but our projections have him substantially lower at RB8. The discrepancy is largely based on varied workload projections, with Barkley’s ADP building in carries and targets likely higher than either of his first two seasons.

Joe Mixon carries a RB6 ADP, but our rankings and projections see him as RB8 and RB17, respectively. We’re lower than consensus for Mixon for workload and efficiency. Mixon’s ADP likely assumes the player we saw in the second half of 2019 will continue into 2020, while studies have found that full-season numbers are more predictive than smaller splits. Many will forecast an offensive upgrade with Joe Burrow at quarterback, but even No. 1 draft picks rarely exceed the competency of a veteran like Andy Dalton in their first seasons. Jeff Ratcliffe also conducted a more thorough investigation of Mixon’s disappointing projection.

Our rankings and projections are in agreement with Leonard Fournette, who had an undisputed workhorse role last season but couldn’t find the endzone. Our ranking and projections have Fournette at RB7, versus RB12 according to current ADP. 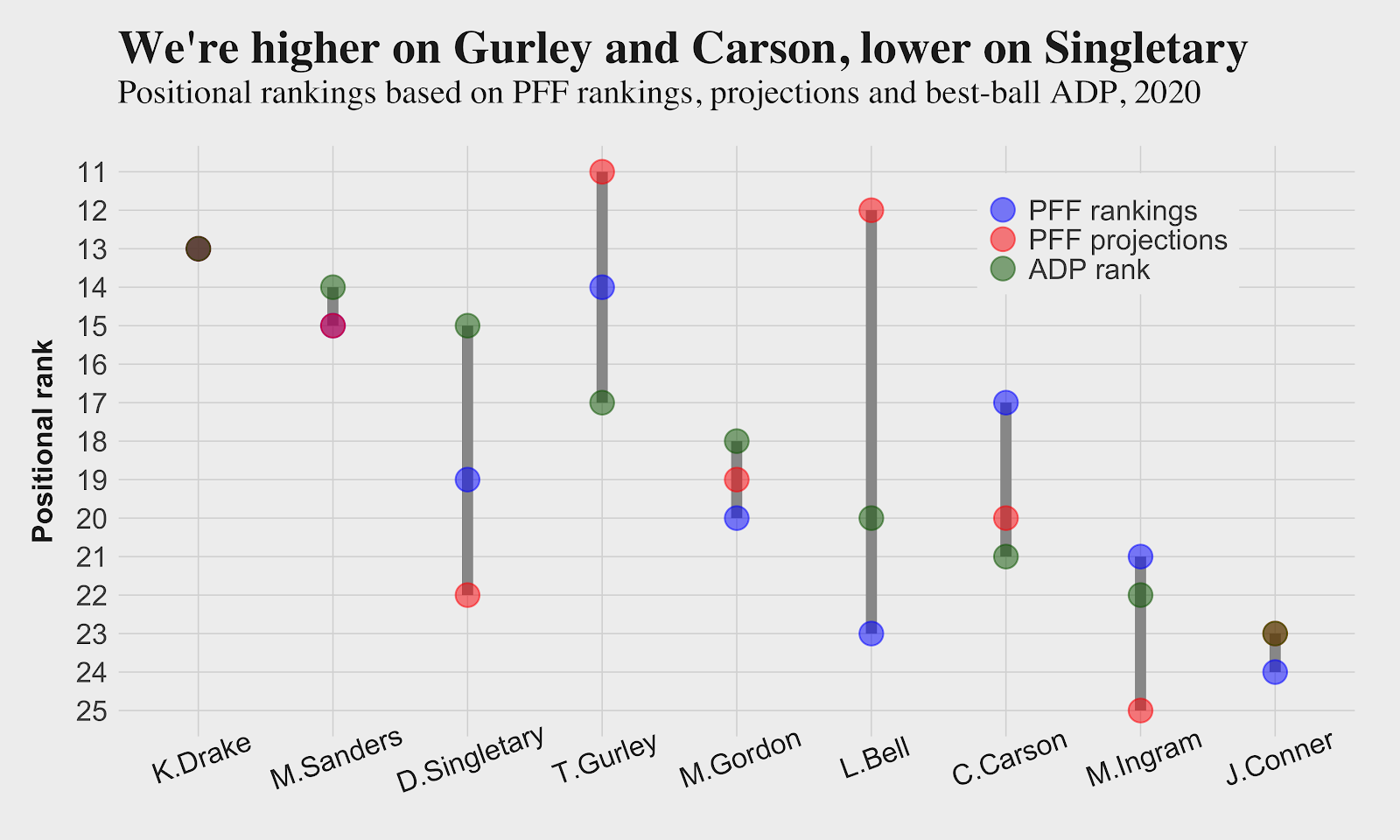 Our rankings and projections are in agreement that Todd Gurley is undervalued at an ADP of RB17. While concerns still exist around Gurley’s health, it’s difficult to model him with less than the lion’s share of carries for a potentially explosive Atlanta Falcons offense.

On the flip side of the coin, our projections and rankings aren’t in love with Devin Singletary, who fantasy drafters are falling for ahead of his sophomore season. This is the classic battle between potential and median projected performance.

Our rankings and projections are split on Le’Veon Bell, who looks much better than ADP by projection and worse by ranking. Maybe Bell will never be the player he was in Pittsburgh, but last season’s debacle for the New York Jets is also unlikely to reoccur. 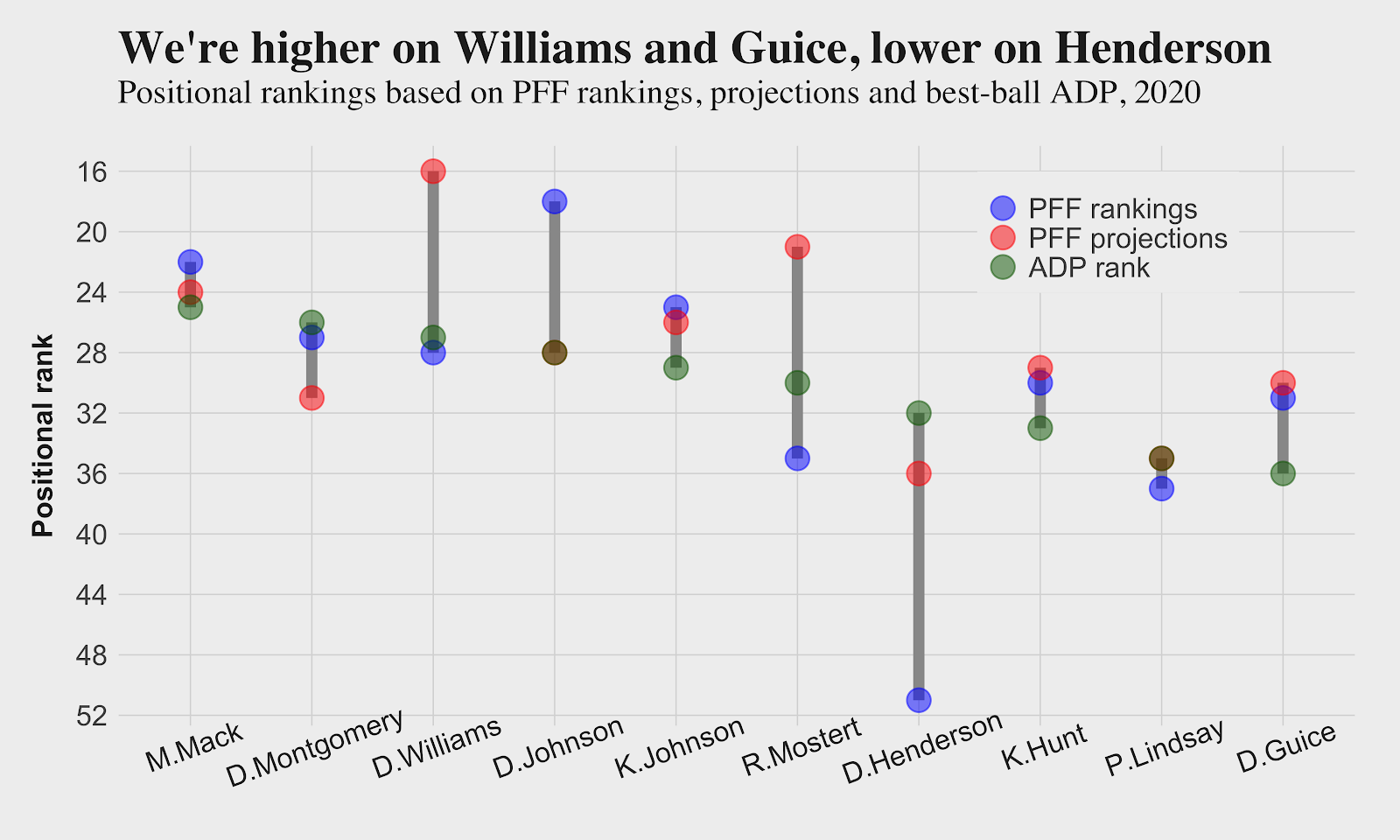 Super Bowl counterparts Damien Williams and Raheem Mostert are both viewed more favorably by our projections than rankings or ADP, likely because of the difficulty in modeling instability of workload into their numbers. Both have substantial upside if they can capture their backfields.

Our rankings and projections are more skeptical that Darrell Henderson will step into a significant role with the departure of Gurley than fantasy drafters. This is the rare time when our player ranking is the outlier, not the projection. Henderson’s value will be highly dependent on news out of camp (if there are training camps) this summer.