I keep hearing about how disappointing Dak Prescott was in his sophomore season. It’s true he fell from 11th to 17th among quarterbacks in PFF grade, but his fantasy falloff wasn’t nearly as steep. In 2016, he averaged 19.7 fantasy points per game across all games he played at least 30 percent of the team’s snaps. This would have ranked seventh-best. In 2017, he averaged 17.3 fantasy points per game, which ranked 11th-best among all quarterbacks to play in at least eight games. In comparison to his current ADP (QB20), he looks like a screaming value.

However, the team also lost Dez Bryant and Jason Witten this offseason, two players who comprise 41 percent of Prescott’s career pass attempts. That’s the bad news and a major factor in his ADP decline. We’ll dissect this factor later, but first let’s look at the positives – that star running back Ezekiel Elliott missed six games last year and left tackle Tyron Smith missed three (four if you consider Week 16 — when he played only three snaps — a missed game) and both are fully healthy and eligible heading into the 2018 season. 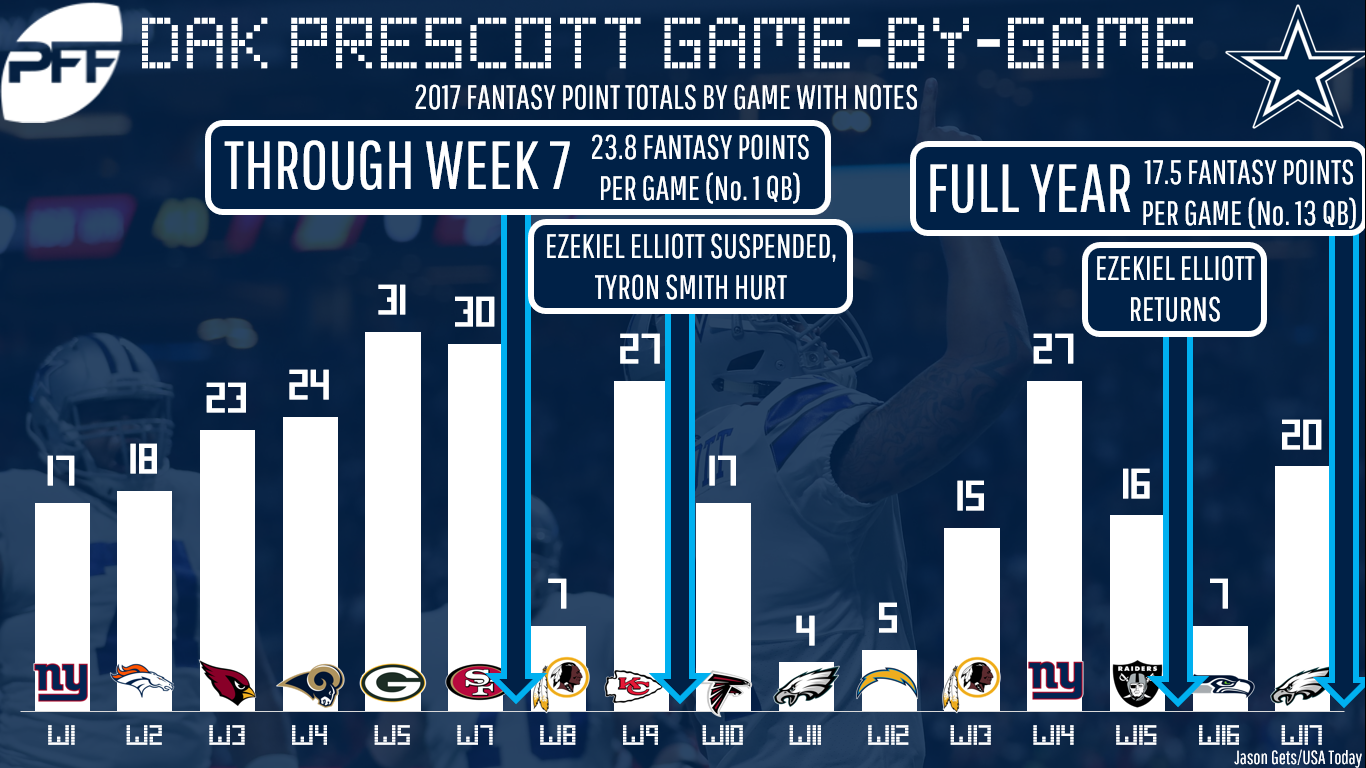 (Notes: You can access this data yourself by using our Signature Stats, available with an Edge subscription, or by visiting our Fantasy Playbook, our season preview draft guide.)

Prescott is somewhat hamstrung by a lack of volume, with Dallas ranking last in dropbacks per game and pass percentage over the past two seasons. I suspect that’s unlikely to change too much, given Vegas’ win-total projections, but it might. On top of that, Prescott hasn’t been used as much as a runner as, perhaps, he should. Prescott averaged 13.6 rushing attempts, 65.0 rushing yards, and 1.0 rushing touchdowns per game over his final three seasons in college. Over the past two seasons, he ranks only 11th of 32 quarterbacks in rushing attempts per game (3.6). This is despite ranking third in rushing fantasy points per game (4.2). Again, I’m not sure this will change much next year, but at the very least, it should be something to keep in mind for dynasty owners.

Finally, let’s address the elephant in the room – or rather, the two elephants who just left the room. Prescott lost Witten to retirement this offseason, but I think fantasy owners might be overstating the loss. The now 36-year-old Witten ranked 46th of 55 qualifying tight ends in PFF receiving grade last season. It’s a concern there isn’t anyone with much experience to replace him with, but Witten wasn’t very good when he was on the field last year anyway.

The same can be said for Bryant. Our analysts have suggested Bryant and Prescott weren’t a good fit for each other and it certainly appeared that way last year. Prescott averaged a 74.8 passer rating when targeting Bryant last year but 101.1 when targeting all other receivers. Bryant also graded 51st among wide receivers in PFF receiving grade, while, for comparison, the newly acquired Allen Hurns ranked 22nd.

Still, though neither player was terrific, losing your two most targeted receivers in a season has to hurt. So, I dug into the numbers to see just how true that was.

The data here surprised me. Apparently losing your two most targeted receivers in a single year didn’t hurt too much. Passer rating fell, on average, by only 1.1 percent. Quarterbacks were a hurt a little more in fantasy-point-per-game differential, but again, the number still seemed low (-0.9, 6.1 percent).

As poorly as Witten and Bryant graded last season and as highly as Hurns graded last season (and as much as I like Michael Gallup), I do think Dallas’ receiving corps is worse off today than it was a season ago. I also think this chart isn’t telling the full story – in many of these instances, the lost receivers lacked the name-brand recognition of Witten and Bryant – but if Prescott fell by 0.9 fantasy points per game next season, he would still rank well above his current ADP (QB15 to QB20).

As it stands, after considering all of the disparate factors we’ve discussed in this article, Prescott is one of my favorite values at the quarterback position. However, this year, there’s also a lot of great late-value at that position. I’m not going out of my way to acquire Prescott, but I’d be fine with landing him as my QB1. In dynasty, however, the 24-year-old’s current ADP is especially egregious (QB18).