Metrics that Matter: Quarterbacks on play-action

In our last article, we examined the fact that quarterbacks are much more efficient when operating from a clean pocket, rather than when throwing under pressure. Of course, this makes sense intuitively, but there’s another less-discussed factor quietly impacting quarterback efficiency — the frequency of play-action passes.

Over the past three seasons, quarterbacks average a 103.5 passer rating on play-action, but only 90.1 the rest of the time. Over this span, passers attempted a play-action fake on just 19.9 percent of their total passes.

In 2016, New England led the league in play-action passer rating (131.6) on 207 play-action passes. In 2017, Bill Belichick responded by having Tom Brady attempt 151 play-action passes, the most by any quarterback over the past three seasons. Perhaps Belichick is already aware of this efficiency hack, but I’d suggest that all other teams start utilizing play-action at a higher rate, and especially so if you’re already a run-heavy team. I think this could be an effective means of gaining a small edge on the rest of the league.

From a fantasy perspective, I suspect there might be utility here for us as well. Using our play-action data, available to Elite subscribers, I contrasted a quarterback’s efficiency on play-action vs. on non-play-action passes over the past three years. Here’s the chart (min. 850 pass attempts): 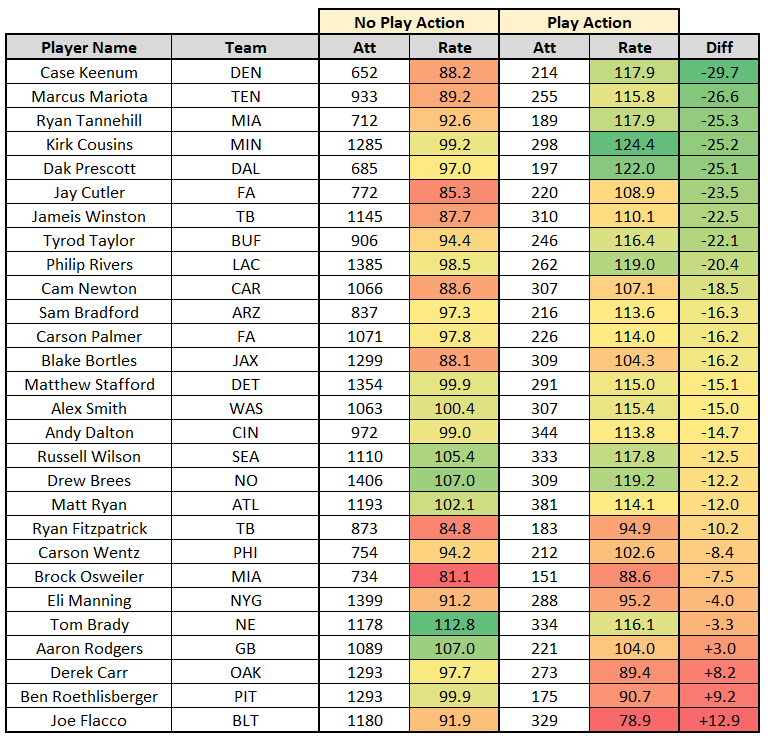