In my PPR rankings, I have Christian McCaffrey ranked as my No. 12 fantasy running back for 2018 and Devonta Freeman coming in two spots below him at No. 14. I didn’t think this would be a controversial ranking, but a few of my Twitter followers certainly felt that it was.

The common critique was something along the lines of this – “How could you rank McCaffrey so much higher than Freeman? Freeman averaged 16.6 touches per game last year and McCaffrey averaged only 12.3.”

My rebuttal to this is fairly straightforward: McCaffrey averaged more fantasy points per game than Freeman last year (14.4 to 14.1). I also think McCaffrey’s role is more likely to grow in 2018, while Freeman’s is likely to remain stagnant. However, the more in-depth response would also take aim at this imagined follower’s weighting of “touches” as a valuable fantasy statistic. 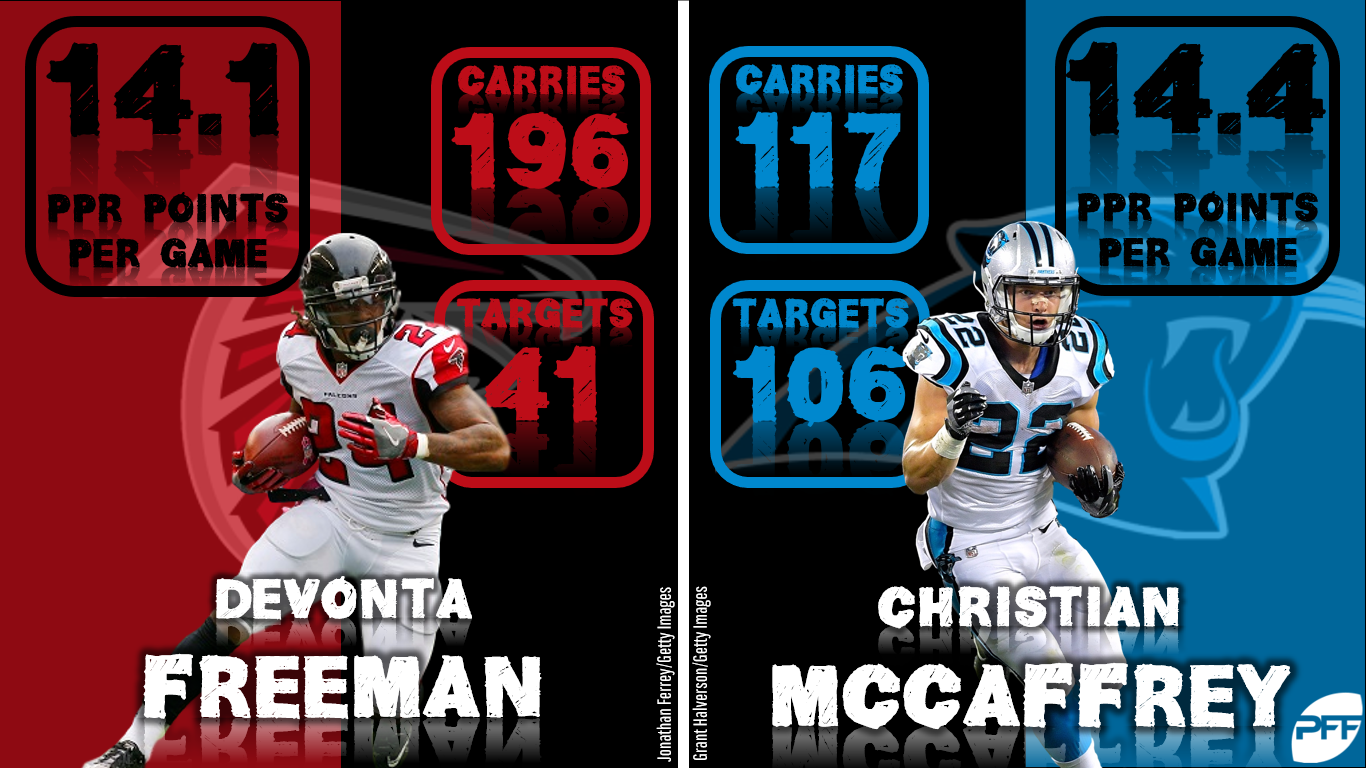 Over the past two years I’ve written more than 75 articles as part of the “Metrics That Matter” series. One metric that does not matter – or, rather, doesn’t matter nearly as much as most people think – is touches. Volume is more important than efficiency for fantasy running backs, and, of course, the more touches a running back receives the more likely they are to rank highly in fantasy points, but, ultimately, it’s a noisy stat that can be improved upon.

With this knowledge at our disposal, we can then better approximate the value of a player’s role than through raw touches. By multiplying total carries by 0.58 and total targets by 1.59 (if assuming PPR scoring), we can sum up these numbers to create what I’ve been calling a running back’s “Weighted Opportunity.”

Over the past decade, among all running backs with at least 70 touches in a single season, raw touches had a 0.89 correlation to PPR fantasy points. Raw opportunities (carries plus targets), fares slightly better with a 0.90 correlation. Meanwhile, Weighted Opportunity trumped both with a correlation of 0.95.

There are two flaws with this metric, however.

To the first point, this is true, but it matters a good deal less for running backs than wide receivers or tight ends. Over the past decade, 85 percent of all running back targets have come within five yards of the line of scrimmage, as opposed to just 32 percent of the time for wide receivers. DeAndre Hopkins led all receivers in yards in air last season with 2,341. The only running back to eclipse 300 yards in air in a single season this past decade was David Johnson in 2016 (487). Le’Veon Bell, for instance, has seen 192 targets over the past two seasons but has just 19 net yards in the air over this span. However, I should also mention that total yards in air and depth of target has greatly increased for running backs over the past three seasons, and that is also represented by the increase in fantasy points per target over this stretch.

The second point is undoubtedly correct, and weighted opportunity might not appropriately account for the role of a player like Freeman, who ranked behind only Todd Gurley in opportunities inside the 5-yard line per game (1.0) last season. 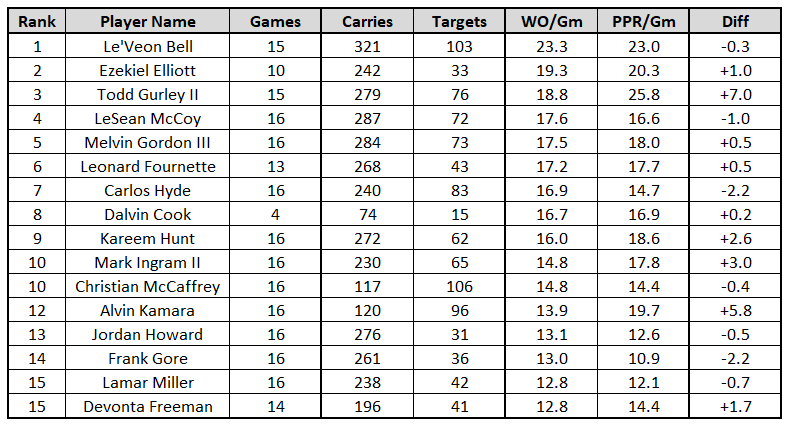 Bell dominated in Weighted Opportunity per game, and his extreme usage over a long sample is a major reason why I prefer him to Gurley as the No. 1 pick in fantasy drafts. In this chart I also included the differential between a player’s Weighted Opportunity score per game and his PPR fantasy points per game average. This can be used to measure a player’s fantasy efficiency. Obviously, Gurley and Alvin Kamara are two of the top regression candidates heading into next season.

Finally, circling back to McCaffrey, head coach Ron Rivera said earlier this month that, he sees no reason why McCaffrey can't reach 200 carries in 2018. Using the methodology outlined above, that increase in 83 carries (from his rookie season) would be worth an additional 48.1 fantasy points. While Freeman paced McCaffrey in expected touchdowns per game (0.68 to 0.36) last season, this carry increase would still be more than enough to make up that difference in fantasy points.