There will always be disconnects between the fantasy world and “real” football value — some for understandable reasons, others not. A low-volume, field-stretching receiver will have more worth on NFL draft boards than fantasy leagues, whose drafters are concerned with individual stats and not affecting a defense.

Even understanding those logical differences, there are often other, less-easily explained disagreements in valuation between the fantasy and draft communities that can tell us where a player is overvalued or undervalued by either party.

The relationship between fantasy ADP and real-life draft position is fairly strong and linear, and in this article, I’ll walk through seven years of fantasy football historical data and build a valuation curve between the two. We can see when fantasy drafters have been too low on a player who went earlier in the NFL draft and vice versa.

Each can probably learn from the other, with NFL teams having more data and knowledge of prospects and fantasy football leagues providing the wisdom of crowds combining thousands of individual opinions into one valuation.

In the plot below, I charted the actual NFL draft position against fantasy ADP in the month following the NFL draft. I highlighted names of some productive rookies who helped win fantasy leagues and others with large deviations in value from the trend line. 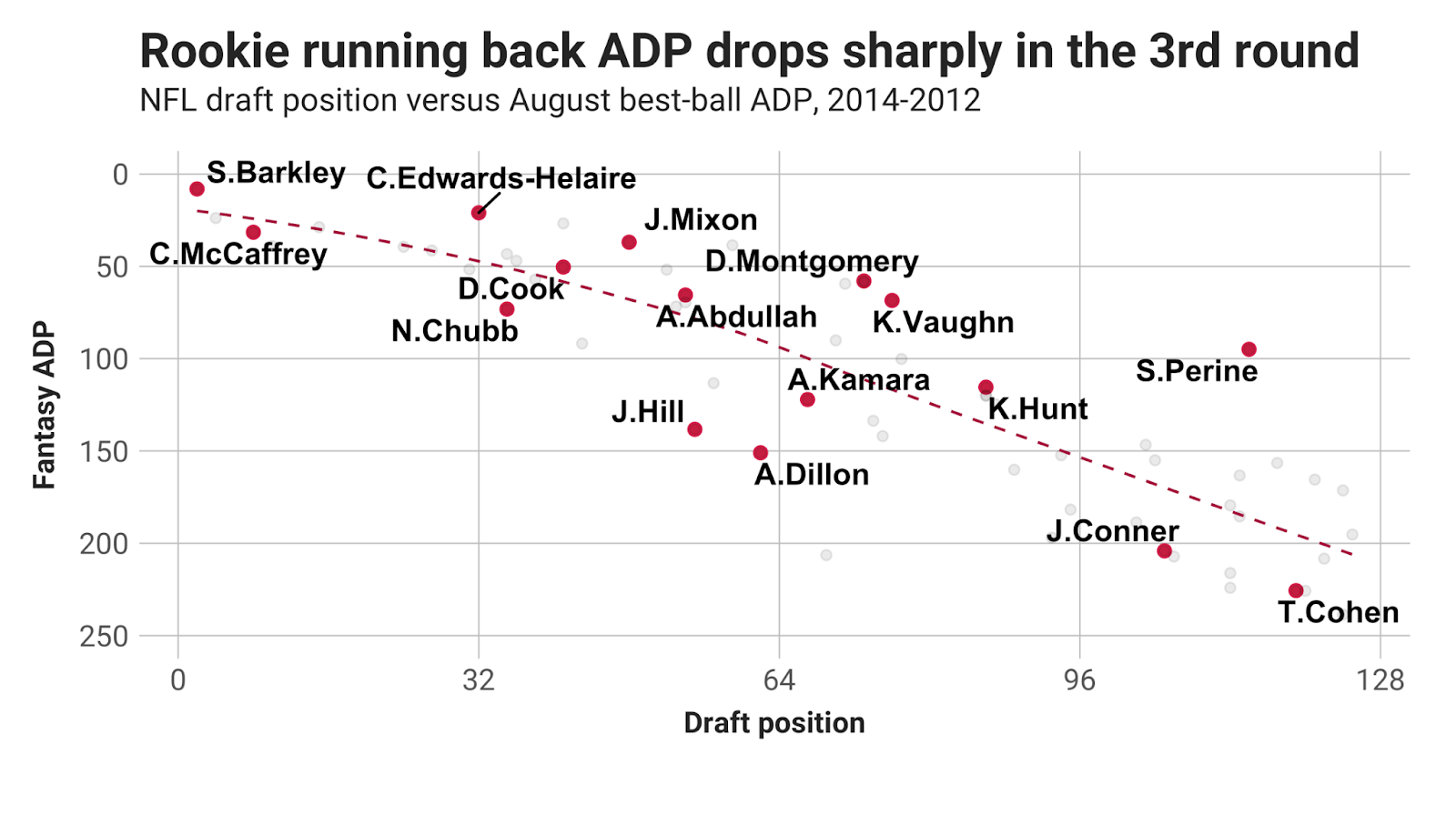 Saquon Barkley was the earliest real NFL draft and fantasy draft pick, and he paid off as the RB1 in 2018 PPR leagues. That isn’t a huge shock, as Ezekiel Elliott accomplished a similar feat as the RB2 in 2016. Rookie running backs are generally much more productive earlier in their careers, so running backs who end up in favorable landing spots are often selected in the first 50 overall fantasy picks — a rarity for rookies at other positions.

Clyde Edwards-Helaire was massively overvalued in fantasy drafts versus his actual NFL draft position. When Edwards-Helaire was taken by the Chiefs with the 32nd pick in 2020, he rocketed up the fantasy draft boards into the second round of fantasy drafts in May, eventually becoming a first-round pick by the time the NFL season started. David Montgomery and Ke’Shawn Vaughn were more overvalued draft risers, with Vaughn barely hitting the field in his rookie season.

Other rookie standouts, such as Alvin Kamara (RB3 as a rookie) and Kareem Hunt (RB4), were either under- or overvalued versus the historical trend line according to rookie ADPs. Others, such as Ameer Abdullah, rocketed up fantasy boards with positive offseason news, only to fall flat during the season (RB44).

For the 2021 class, I’m using expected draft positions from GrindingTheMocks, which uses publicly available mock draft data in a regression to determine when players are likely to be picked. The fantasy ADPs are taken from best-ball leagues over the past two weeks. 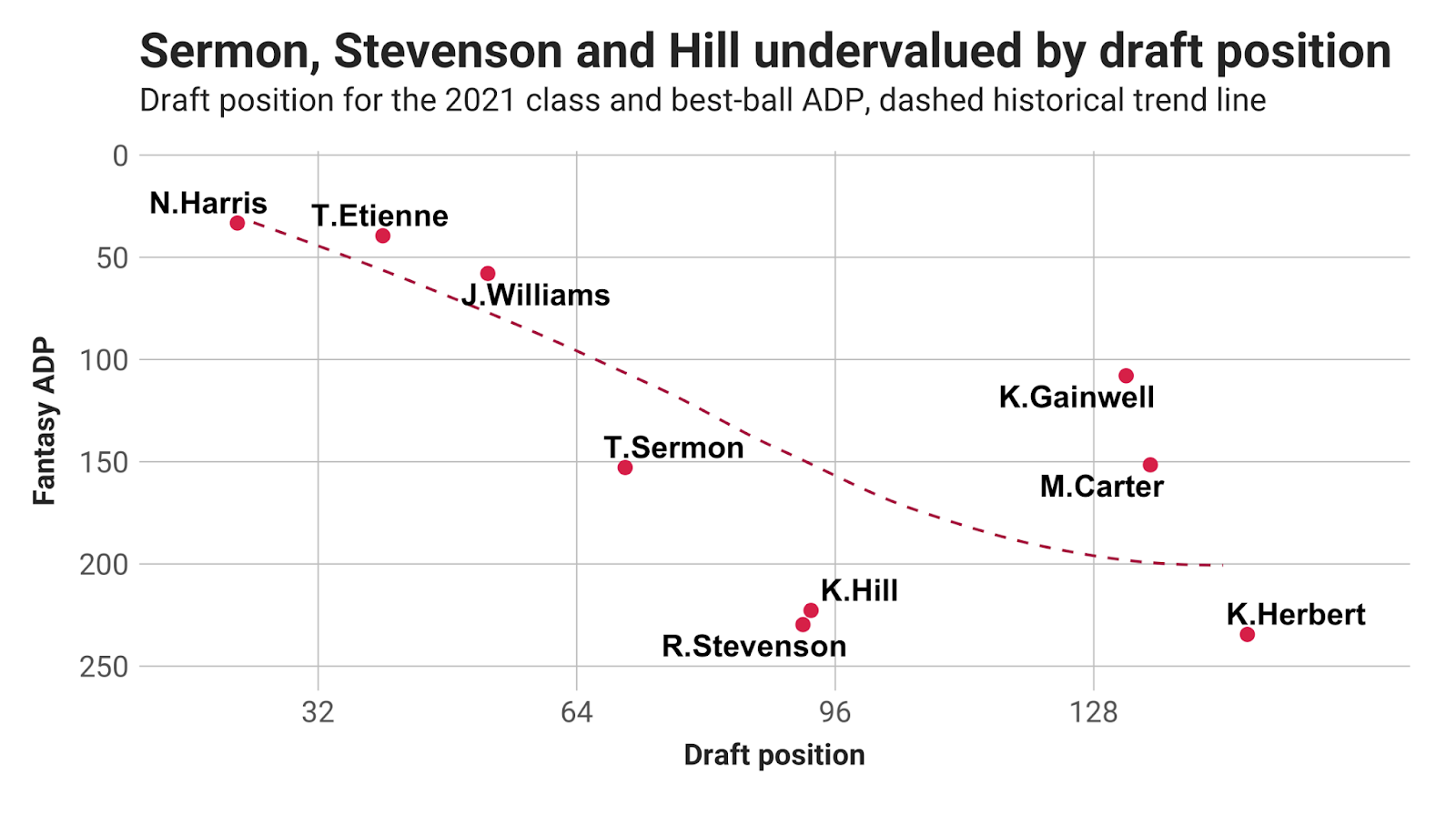 Najee Harris is slightly undervalued in comparison to the historical trend line with roughly the same ADP as Travis Etienne, who is expected to be drafted almost 20 picks later. My NFL success modeling has Harris as the clear RB1. Javonte Williams looks slightly overvalued at his expected draft position in the mid-second round, though his ADP could go either direction based on the attractiveness of his landing spot.

The most clearly overvalued rookie running backs in best-ball drafts are Kenneth Gainwell and Michael Carter. Part of this is their pessimistic expected draft positions, both of which have tumbled over the past few weeks to the fourth round and could be too pessimistic. Both are smaller backs at around 200 pounds and might not have true NFL workhorse upside.

On the flip side, Kylin Hill and Rhamondre Stevenson have seen their expected draft positions rise into the third round, but fantasy drafters aren’t buying it. Hill and Stevenson have more ideal size to carry an NFL workload, and either would see a massive ADP jump if they’re drafted by a team with a void at the position.

Trey Sermon’s expected draft position has solidified at RB4, yet he’s still RB5 in fantasy drafts and undervalued by roughly 20 picks. Sermon isn’t a favorite of spreadsheet lovers after subpar production throughout his college career, but he has the requisite size and showed high-end production over the last several weeks of the 2020 season.