Below, we’ll be taking an in-depth look at the running back position through the lens of this metric and analyzing what this means for the 2019 fantasy season.

Overall, 2018 was an average year for running backs in terms of usage, but it was atypically top-heavy. Multiple running backs posted historically great seasons. Saquon Barkley (fourth) and Christian McCaffrey (eighth) both ranked top-10 this past decade by total expected fantasy points. On a per-game basis, all of Todd Gurley (fifth), Barkley (seventh), McCaffrey (11th), and Ezekiel Elliott (12th) ranked top-12 this past decade. In terms of receiving expected fantasy points, all of James White (first), McCaffrey (second), Barkley (sixth), and Alvin Kamara (ninth) ranked in the decade’s top-10.

See below for a list of the running backs who ranked top-20 in expected fantasy points per game followed by an in-depth look at some of the highlights. 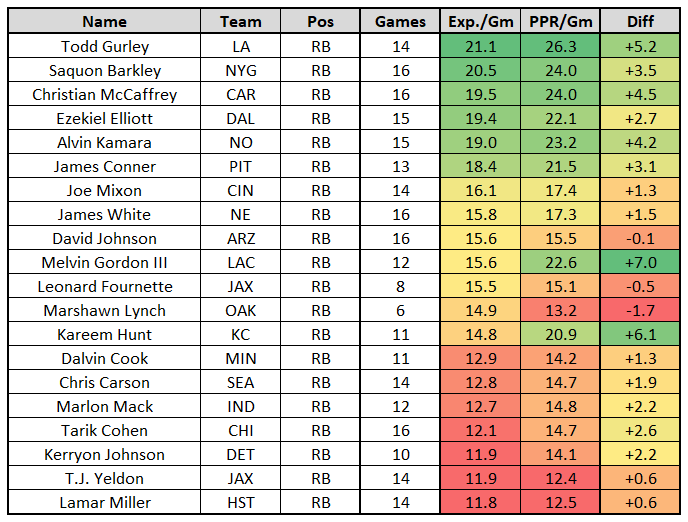 Last season, Gurley averaged 26.6 fantasy points per game, 21.1 expected. Those numbers rank first- and fifth-highest, respectively, over the past decade. We know Gurley is going to see a reduced workload in 2019, so the question becomes, what sort of reduction does he need to see to remain a value at current ADP (RB10). Last season Gurley saw 91% of his team’s running back expected fantasy points — that number led the league and ranks fourth-best this past decade.

Over the past five seasons, on average, the RB10 averaged 14.3 expected fantasy points per game and the RB15 averaged 12.7 expected fantasy points per game. So, if we cut Gurley’s volume by 68%, that should still rank about 10th-best at the position. Or, if it were reduced by 60%, that could still be enough to rank 15th. Remember, Gurley had a (roughly) 90:10 split last season. So, if we assume even a 50/50 split next year, his volume (ignoring efficiency, which is another feather in Gurley’s cap) should still be good enough to rank top-15.

Keep an eye on reports out of camp – what sort of split beat writers and Los Angeles coaches are expecting. Pay extra attention when they’re discussing his usage in blowouts (potentially a massive loss for Gurley) and especially usage near the end zone. Over the past two seasons, Gurley leads all running backs in expected touchdowns with 32.1 (11.8 more than the next-closest). Gurley could still be worth a top pick, even if he is no longer an every-down back, but if I’m going to draft him, I want to be confident he’s still going to receive the majority of the team’s touches and near-end-zone work. 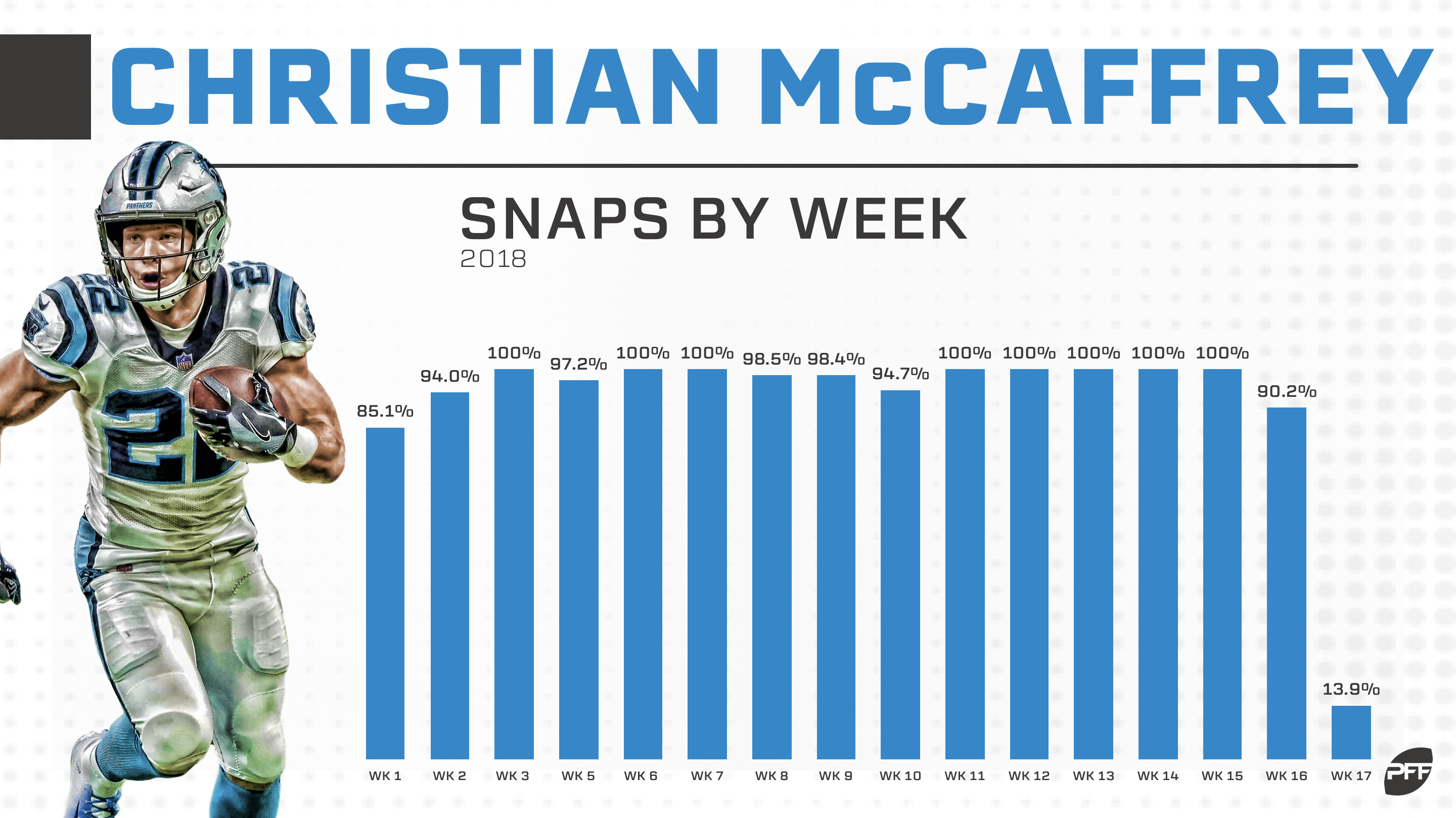 In 2018, Gordon outscored his expectation by 7.0 fantasy points per game. That’s the second-most by any running back this past decade, behind only Chris Johnson’s 2009 season (+7.9). Yes, Gordon was tremendous last season, but you’re first takeaway should be one of concern. This stat screams regression to the mean, especially because Gordon was almost perfectly average throughout the rest of his career (+0.2 fantasy points per game over expectation).

However, with more context, the regression doesn’t look like it will be so steep. Gordon ranked 10th in expected fantasy points per game but seventh if we exclude the value of expected touchdowns. Gordon scored on all of his opportunities inside the 5-yard line and on nine of his 12 opportunities inside the 10-yard line. That sort of efficiency is bound to regress (and significantly so), but near-end-zone volume should be even better next year as a result, boosting his expected fantasy numbers.

Perhaps an even bigger concern for Gordon is just how well Austin Ekeler has played over the past two seasons. Over this span, Gordon ranks fourth in fantasy points scored over expectation (+96.2) but Ekeler ranks fifth (+81.9). Last year, Gordon ranked seventh in PFF grade, Ekeler sixth.

Elliott ranked fourth in expected fantasy points per game (19.4) last season, but his usage was even better than that might imply. Elliott totaled 29.4% of his team's expected fantasy production, which led all players last year and ranks fifth-highest by any running back this past decade. Basically, he was the focal point of his team’s offense to a greater extent than any other player in the league.

Elliott, like Gordon, also suffered from a lack of near-end-zone work. While Gordon “suffered” from hyper-efficiency, Elliott was hurt by his team’s efficiency, or lack thereof. Elliott saw no decline in expected touchdown market share (he was still the team’s focal point near the end zone) but did see a steep decline in total expected touchdowns. Last season, Dallas ranked 23rd in red-zone drives per game, though they ranked top-seven in each of the previous two seasons. If we adjust for this (by removing expected touchdowns from the equation), Elliott’s 2018 season would have ranked fifth-best by any running back this past decade. If the Cowboys again rank top-10 in red-zone drives per game next season (they should), Elliott could be in store for an all-time great fantasy season.

In 2017, Fournette ranked seventh in expected (15.9) and eighth in actual fantasy points per game (17.7). Last season, Fournette ranked 11th (15.5) and 12th (15.1), respectively. Although his efficiency last season was concerning, his volume was not. Fournette played in eight games last year but saw the field in only 26 (of a potential 32) quarters, due to ejection and injury. Once those numbers have been adjusted, Fournette climbs to fifth in expected (19.1) and ninth in actual fantasy points per four quarters (18.5).

Over the past two seasons, Hunt has outscored his expectation by a whopping 129.0 points, which ranks behind only Todd Gurley and Alvin Kamara. Over this span, he was also our second-highest-graded running back (behind Kamara). Although Nick Chubb was our highest-graded running back last year, it seems hard to imagine Hunt won't force the backfield into a committee once he’s back from suspension.

Last year, 75% of Cohen’s expected fantasy points came from receiving volume, which led all running backs to average at least 10.0 expected fantasy points per game. Cohen totaled 346 yards in air in 2018, which was the second-most by any running back this past decade. He also ran a position-leading 37% of his routes as a wide receiver. In 2019, he’s either one of the most valuable scatbacks in fantasy football, or he’s going to be a fantasy afterthought while David Montgomery serves in an every-down capacity.

There’s been some concern reflected in Damien Williams’ ADP that Hyde might eat heavily into his workload, and specifically around the end zone. I’d bet against that. Hyde has been our least efficient running back over the past two seasons, falling 71.0 fantasy points short of his expectation. He’s been especially bad near the end zone, falling 7.3 touchdowns shy of his expectation (ranks worst over this span). As I’ve argued this offseason, I’m betting on a big fantasy year in 2019 from Williams. Though, note (from our Hunt blurb), his volume might not be as good as Hunt’s production has implied.

Who are the league’s bell cow running backs?

Earlier this month, we measured running back bell cow potential by looking at expected fantasy point market share. In an effort to avoid repeating myself, I kept today’s article comparatively short. I do implore you to read this article because, for running backs, I’ve found their market share numbers to be more meaningful than their per-game totals.