PFF recently created an incredibly cool Fantasy Football Strength of Schedule (SoS) tool for EDGE and ELITE subscribers. The system factors PFF Player Grades into the methodology, which provides especially important early-season benefits to account for roster turnover from the previous year. This also comes in handy during the season by projecting how a defense will perform while dealing with injuries.

The strength of the opponent is rated from 0 to 10, with 10 being the most-favorable matchup for that specific position. 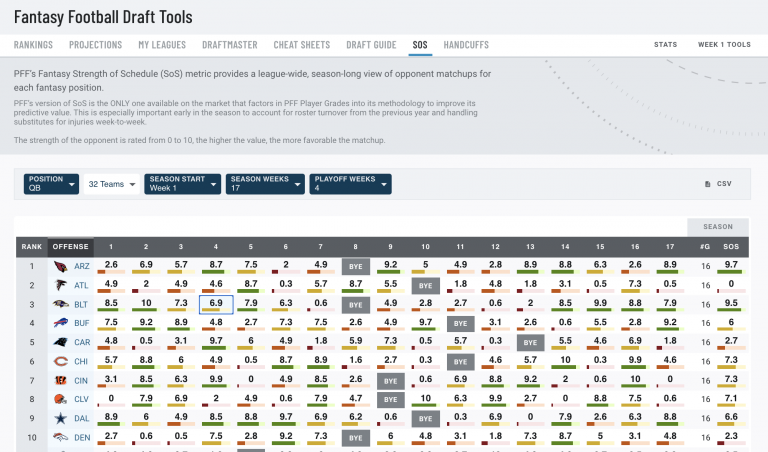 Cool stuff that will be actionable throughout the season, as well as today!

We’ll have so much more information on defenses after the first chunk of the season that it’s fairly useless to project season-long or playoff-specific strength of schedules. Still, identifying which players and teams have a troubling first four weeks could provide an early edge in fantasy football drafts of all shapes and sizes.

What follows is a breakdown on the easiest and toughest fantasy football schedules by position for the first four weeks of the 2020 season.

Honorable mention: The Steelers, Eagles, Patriots, Bears and Jaguars round out the top 10 teams with the most QB-friendly schedule to start the season. … Gardner Minshew represents a solid late-round streamer option to use early in the season thanks to matchups vs. the Colts, Titans, Dolphins, Bengals, Texans and Lions before a Week 7 bye. … Tyrod Taylor’s rushing upside could be useful in matchups against the Bengals, Chiefs and Panthers to start the season. … Teddy Bridgewater has an up-and-down start against the Raiders, Buccaneers, Chargers, Cardinals and Falcons; “luckily” the Panthers should be in comeback mode thanks to their potential league-worst defense regardless, which should be good for Bridgewater’s fantasy value. … September is especially gloomy for Daniel Jones, who starts with the Steelers, Bears, 49ers and Rams. … Baker Mayfield won’t be an advised start at Baltimore in Week 1, but his next stretch against Cincinnati, Washington, Dallas and Indy is doable. … Matt Ryan and Ryan Tannehill join our aforementioned five QBs with especially tough starts to the season.

Honorable mention: The Cowboys, Cardinals, Bills, Vikings and Falcons round out the top-10 easiest RB schedules in Weeks 1-4. … Leonard Fournette might have a short leash (especially as a pass-catcher), but matchups against the Colts, Titans, Dolphins, Bengals, Texans and Lions to start the season are appetizing. … Alvin Kamara has a good opportunity to get back to his high-end RB1 ways in a hurry with opening matchups against the Buccaneers, Raiders, Packers and Lions. … Life for Clyde Edwards-Helaire and Damien Williams might not be smooth sailing in September against the Texans, Chargers, Ravens and Patriots. … Game-script concerns for Josh Jacobs could be plentiful early in the season against the Panthers, Saints, Patriots, Bills and Chiefs. … David Montgomery would do well to take advantage of a soft first three weeks against the Lions, Giants and Falcons. … The Rams, Steelers, Packers, Jets and Texans round out the top 10 backfields with the toughest opening season schedules.

Honorable mention: The Cardinals, Buccaneers, Rams, Colts and Jets round out our top-10 WR cores with the best September schedule. … Davante Adams has an exploitable first month of the season against the Vikings, Lions, Saints and Falcons. … D.J. Chark and company face off against the Colts, Titans, Dolphins, Bengals, Texans and Lions before their Week 7 bye. … Adam Thielen is another alpha No. 1 WR set up well out of the gate against the Packers, Colts, Titans, Texans, Seahawks and Falcons. … OBJ won’t have an easy time in his opening season matchup against the Ravens, but he’ll have a chance to rebound in Weeks 3-5 against Washington, Dallas and Indianapolis … Amari Cooper also won’t have an easy start to the season against Jalen Ramsey, although ensuing matchups against the Falcons, Seahawks, Browns and Giants should be a bit more manageable. … The Panthers, Raiders, Washington, Saints and Dolphins round out the top-10 WR rooms with the toughest opening month of the season.

Crowded passing game for sure but Dawson Knox is #good pic.twitter.com/yTWaVx3QD6

Honorable mention: The Patriots, Eagles, Chargers, Steelers and Bengals round out the top-10 teams with the softest September schedules for the TE position.  … Mike Gesicki has to deal with the Patriots in Week 1, but the Bills, Jaguars and Seahawks should provide bounce-back opportunities for the primary slot receiver.  … Ian Thomas has a tough first three weeks of the season before seeing solid spots against the Cardinals, Falcons, Bears, Saints and Falcons during Weeks 4-8. … Noah Fant has an up-and-down start against the Titans, Steelers, Buccaneers, Jets, Patriots and Dolphins in the first five weeks of the season. … Evan Engram must survive matchups against the Steelers, Bears and 49ers to start the season before getting a chance to feast on the Los Angeles Rams, Dallas, Washington and Philadelphia. … The Rams, Lions, Browns, Buccaneers and Jets round out our top 10 teams with the least fantasy-friendly TE schedules to start the season.

Honorable mention: The 49ers, Seahawks, Chiefs, Steelers and Buccaneers round out the top 10 softest schedules for fantasy defenses in September. … The Bucs in particular are worth paying attention to, as they get the Panthers, Broncos, Chargers and Bears following their tough season-opening matchup against the Saints. … The Cardinals, Lions, Falcons, Patriots and Ravens round out the bottom 10 defenses in terms of strength of September schedule.