Each week in this space, I’ll be highlighting the players I’m building most of my lineups around on that week’s main slate. (Most of these locks are for tournaments, though I’ll do my best to differentiate where needed.) Lock these guys into lineups and go from there. Check out below for Week 8.

At 51.5 points, Sunday’s Raiders/Texans game has the second-highest over/under of the weekend, behind only the Seahawks/Falcons game. There are four quarterbacks in those two games combined, and I have reservations about the other three — Derek Carr has minimal ceiling, Matt Ryan is banged up, and Russell Wilson (while excellent) is in a situation where his team could jump out to a big lead and run the ball to ice the game. Watson is in a smash spot against a Raiders team that just allowed Aaron Rodgers to go nuts, and with Will Fuller out his stacking options (DeAndre Hopkins and Kenny Stills) are obvious and easy.

With Kerryon Johnson on IR, the Lions’ backfield consists of typical pass-catchers Ty Johnson and J.D. McKissic, new addition Tra Carson, and just-off-the-practice-squad Paul Perkins. That’s not exactly a recipe for a run-heavy game, especially against a Giants secondary that has PFF’s fifth-worst PFF coverage grade (43.1). Somehwat surprisingly, given what we expected from the team to start the year, Stafford is averaging his third-most passing yards per game (291.8) and his most since 2012.

On Wednesday night’s RotoGrinders show, I recommended Tannehill as a Week 8 play and host Jordan Cooper asked me if that was just recency bias, given Tannehill had a good-for-him starting debut and using him might be mere point-chasing. And the answer is … sort of, sure. At the same time, it’s been logical all year that the Titans should be a pass-happier offense than it’s reputation says. And against a pass-funnel Tampa Bay offense, Tannehill would have been a top cheap play this week even if he had thrown for 120 yards last week.

This is an excellent week to pay up at running back, even if you avoid Christian McCaffrey against the 49ers and a banged-up Alvin Kamara. My four locks at the position are all top-six in salary, and the discount plays (other than potential injury replacements whose statuses are up in the air right now) have questions. Expect to spend a lot at running back.

The Lions have allowed the third-most points to opposing running backs so far this year. With recent news that Sterling Shepard might not be ready to return this week, and some combination of Darius Slay and Justin Coleman manning up on some combination of Golden Tate and Evan Engram, the Giants are likely to have to rely on their superstar running back. 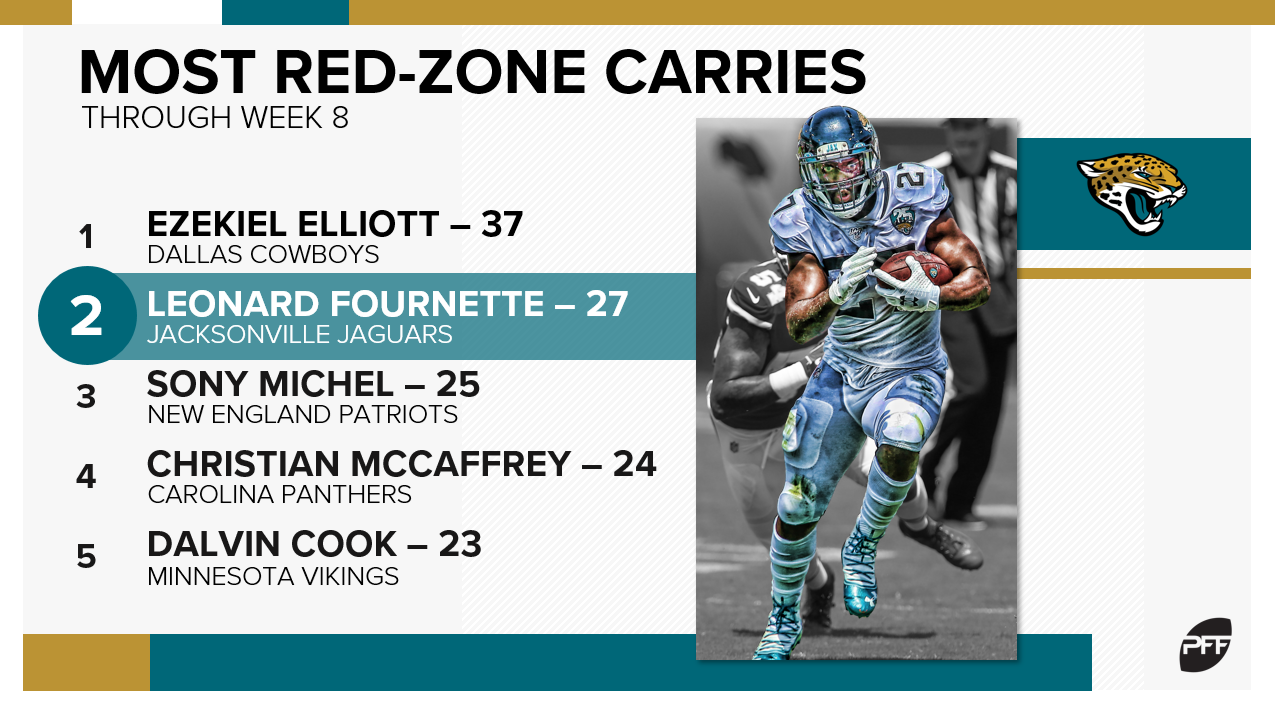 It’s not an original insight to point out that Fournette, who leads the league in touches this year, is due for plenty of positive touchdown regression, given that he’s second in the league in red-zone carries (27) and has only one touchdown to show for it. The Jets just allowed Sony Michel to score three times. Is that a guarantee that regression starts to hit Fournette this week? Of course not. But it’s an excellent omen.

The Rams are the biggest favorites (12.5 points) and have the highest implied point total (30.5) on the main slate this week, facing a Cincinnati team that has allowed the most PPR points per game to running backs this year. Jared Goff has never traveled well, and with that level of odds, we can expect Gurley to have a massive workload and do a lot with it, particularly if Malcolm Brown is out again (which seems increasingly likely).

The Seahawks are 3.5-point road favorites this week, which, given Matt Ryan’s injury and the fact that the Falcons appeared to go into sell mode this week, actually feels conservative. Carson is third in the league in RB snaps over the last five weeks and fourth for the full season. Expect him to get a healthy workload.

As our Austin Webster noted in his Week 8 DFS preview, Hopkins has seen a 29% target share across the last two years in games Will Fuller has played and a 33% share when Fuller has been out. Kenny Stills being around now could change that, but even then, Hopkins got back to the good last week and this week faces a Raiders team with PFF’s second-worst team coverage grade (39.5) that just traded Gareon Conley.

Per our WR/CB matchup chart, Golladay has the single best matchup of the week, likely to face the majority of his coverage from DeAndre Baker, the third-lowest-graded cornerback (36.5) out of 122 qualifiers. For as frustrating as Golladay’s Week 7 was, he is still second in the league in end-zone targets, third in red-zone targets.

Do you really need an argument here? The Eagles’ struggles against outside receivers are borderline legendary at this point, and Brown is one of the best deep receivers in the league. It’s simple.

The aforementioned risks of the Seahawks leaning on the run have me fading Tyler Lockett a bit this week, but I’m still in on Metcalf, who profiles as a guy who doesn’t need as many targets to produce. And with him setting a career-high in targets last week (with Will Dissly) gone and leading the league in end-zone targets, it’s easy to see a scenario where Metcalf puts up a DeSean Jackson-ian 4/130/2-type line.

Hooper has the third-most PPR points through Week 7 of any tight end since 2013 and draws a Seattle defense that is allowing the sixth-most PPR points per game to opposing tight ends this year, including the fifth-most targets, third-most yards, and eighth-most touchdowns. With Matt Ryan banged up, the dump-off option of Hooper might be his route rather than waiting for the receivers to get open. 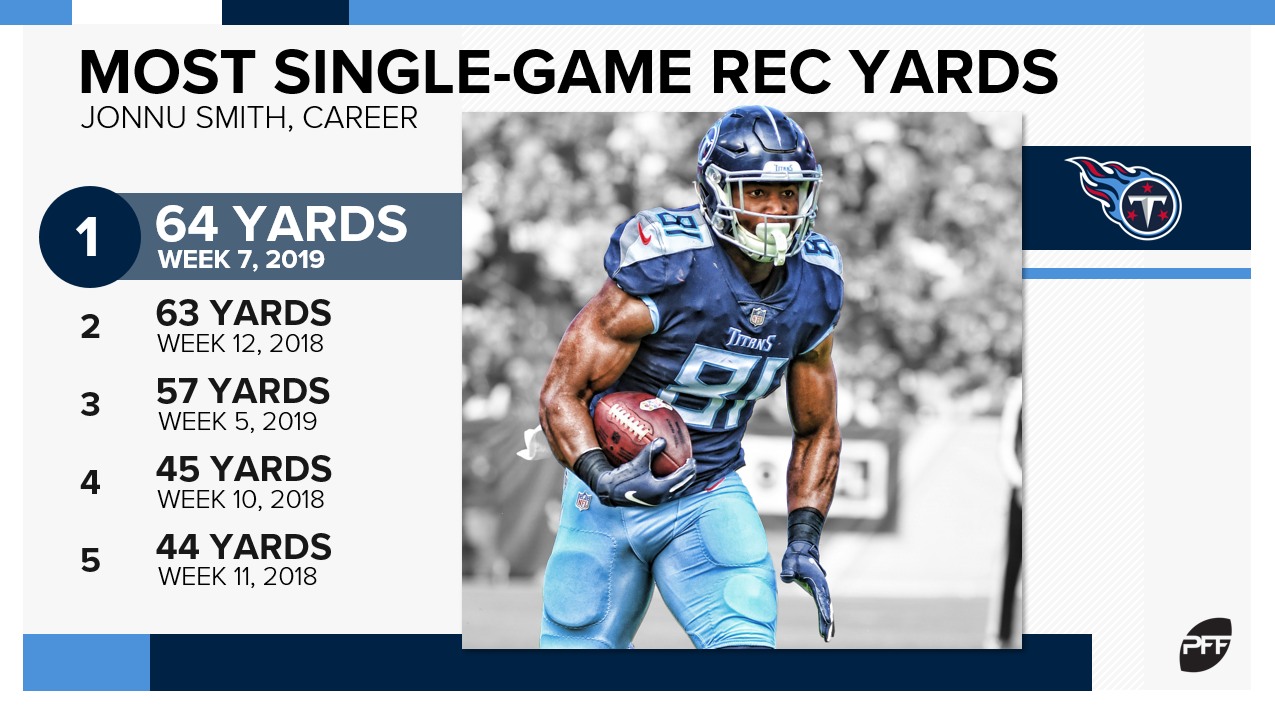 Obviously, Smith’s role is contingent on Delanie Walker not playing, but Smith is a cheap option (especially on DraftKings, where he’s only $300 over min-price, as opposed to FanDuel, where he’s $900 above) who just set a career-high in receiving yards as an emergency fill-in, has a TE coach as his offensive coordinator, and is facing a Tampa Bay defense that is allowing the second-most points per game to tight ends this year.