This isn’t meant to be a comprehensive, one-stop-shop for all things DFS in Week 8. Rather, it’s just an early look at the notable takeaways. Check back later in the week as our team offers up full breakdowns of every approach to the slate. But you can start your DFS week here.

It has been a tough year for Michel from an efficiency perspective, but the fantasy upside is still there, as we saw Monday against the Jets. Despite getting only 42 yards on 19 carries, Michel still managed to put up 22.4 fantasy points due to his three touchdowns. The TD upside is what made Michel so enticing heading into this year. He has 6 red-zone rushing TDs on the season and has seen the third-most red-zone rushes with 25. He now draws a matchup where he has the ability to be more effective on a yardage basis as well. Over the last two games, the Browns have allowed 377 rushing yards to RBs. Michel has big upside if he can add on some extra yardage to his weekly TD upside.

Boyd has had two disappointing games in a row now and presents a good buy-low spot in DFS this week. The opportunities have been there. In Week 7, he ran the second-most routes among WRs and saw 14 targets. This week, the Bengals should get into a more positive game-script in comparison to last week as they currently sit as significant underdogs. The addition of Jalen Ramsey for the Rams will limit the outside WR play of the Bengals, but Boyd will avoid Ramsey for the most part. He has played 65% of his snaps from the slot and will have a big week if he and Andy Dalton can connect a few more times on all the opportunities. 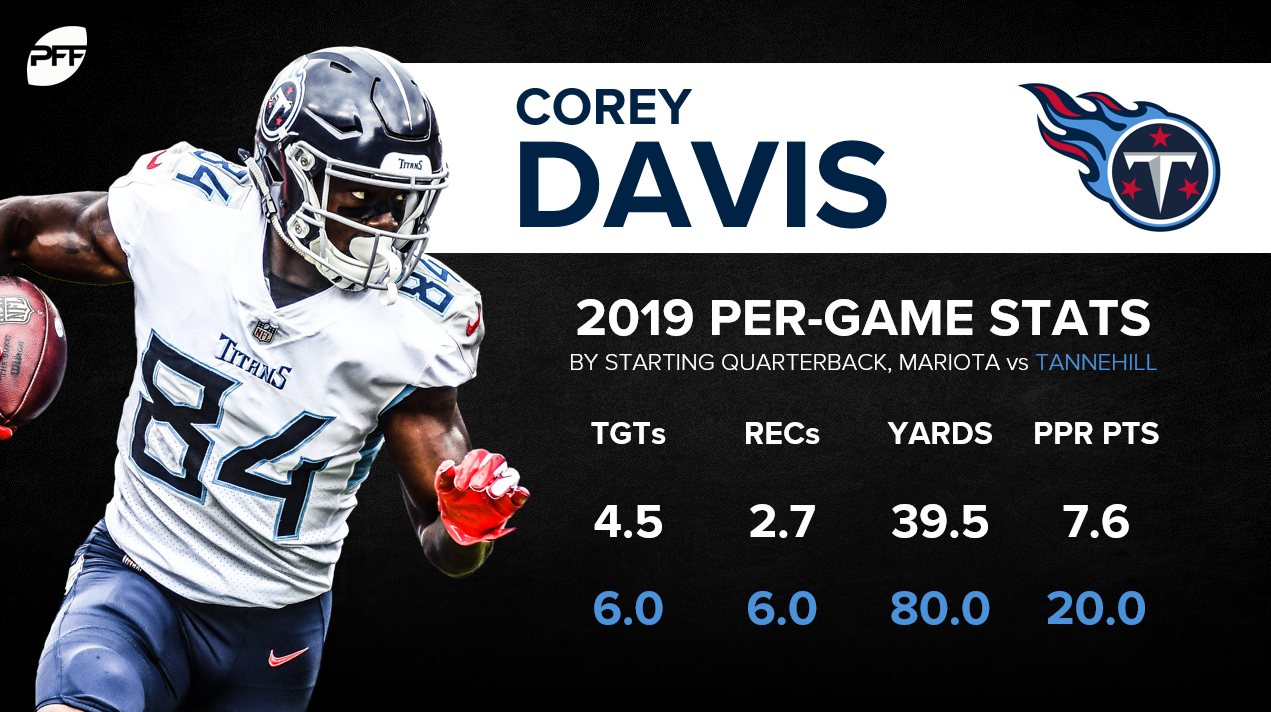 Davis likely will co-sign on Ryan Tannehill being the starting QB after this past week. On 6 total targets from Tannehill, Davis had 6 catches for 80 yards and 1 touchdown. He and Tannehill showed great chemistry and the perfect passer rating when Tannehill targeted him was certainly a good start. In Week 8, the Titans passing offense sees a soft matchup against the Buccaneers funnel defense. Over the last four weeks, no defense has allowed most fantasy points to WRs than the Bucs. They have had their priorities set on stopping the run and if that continues, Davis is in for a big day.

With Kerryon Johnson week to week with a knee injury, Ty Johnson is likely to step up as the featured back. It is tough to be fully confident that he sees the full workload, but signs point to him seeing the majority of the snaps with him seeing 49 snaps to J.D. McKissic’s 18 last week. Ty draws a favorable matchup against the Giants with them allowing the sixth-most fantasy points per game to RB. Ty makes for an intriguing GPP play as people may shy away from him with question marks around his snap share and workload for this week.

Tannehill and Davis or A.J. Brown offer extremely cheap stacks that can return a lot of value. As mentioned with Davis above, the Bucs have been one of the biggest funnel defenses to passing offenses this year. They have allowed the fewest rushing yards to RB, but the seventh-most passing yards to QBs. This game also should give more opportunities to the Titans offense. Last week they faced the Chargers, the slowest-pace team in the NFL, and now draw the Buccaneers, the 16th-fastest (fifth when trailing). The Titans have three matchups that can go in the favor of them in the passing game in Davis, Brown, and Adam Humphries. Also, the Humphries revenge game narrative is certainly not out of play against his former team.

With Aaron Rodgers torching the Raiders defense this past week, some more ownership should fall to Watson. Rodgers was able to throw for 429 yards and had 6 total TDs. The Texans have an intriguing team total of 28.50, making Watson a potentially popular play this week.

The upper-tier running backs do not have much intrigue this week outside of Barkley. Christian McCaffrey is typically matchup-proof, but the 49ers defense has been very good and consistent this year, which should shy some people away. Also, McCaffrey is coming off a bye week, taking away some of the potential buzz compared to if he was coming off another monster week. Alvin Kamara is highly questionable and if he is out that likely puts more ownership on Barkley. On top of that, it is a favorable matchup for him, and I expect him to be popular.

With Kamara out, we saw the Murray’s upside Sunday. He got 32 touches and saw 84% of the total snaps. He projects for another big workload if Kamara is out again and in a positive gamescript at 9.5-point favorites. He remains underpriced on FanDuel and DraftKings if Kamara is in fact out.

With ownership likely going on Watson, a good amount of those lineups should have him paired with Hopkins. Will Fuller will be out with his hamstring injury and Hopkins should see a very healthy target share.

The Falcons defense has been a disaster this year. Russell Wilson/Lockett stacks should draw a good amount of ownership leading to some potential chalk with Lockett this week. The injury to Will Dissly adds intrigue to Lockett with more potential targets as well.

It’s tough to fade a QB who has been playing as well as Wilson, but if Matt Ryan is out for this week, it could be a perfect time to fade him. The Falcons offense would likely be a shell of itself in that instance. The Falcons just traded Mohamed Sanu, and Matt Schaub will not be able to run the offense nearly to the same level Ryan has. The game could turn ugly quick and have a bad gamescript for Wilson, with the Seahawks chewing clock the majority of the second half. This will limit his overall upside and not worth the top overall DFS QB salary. 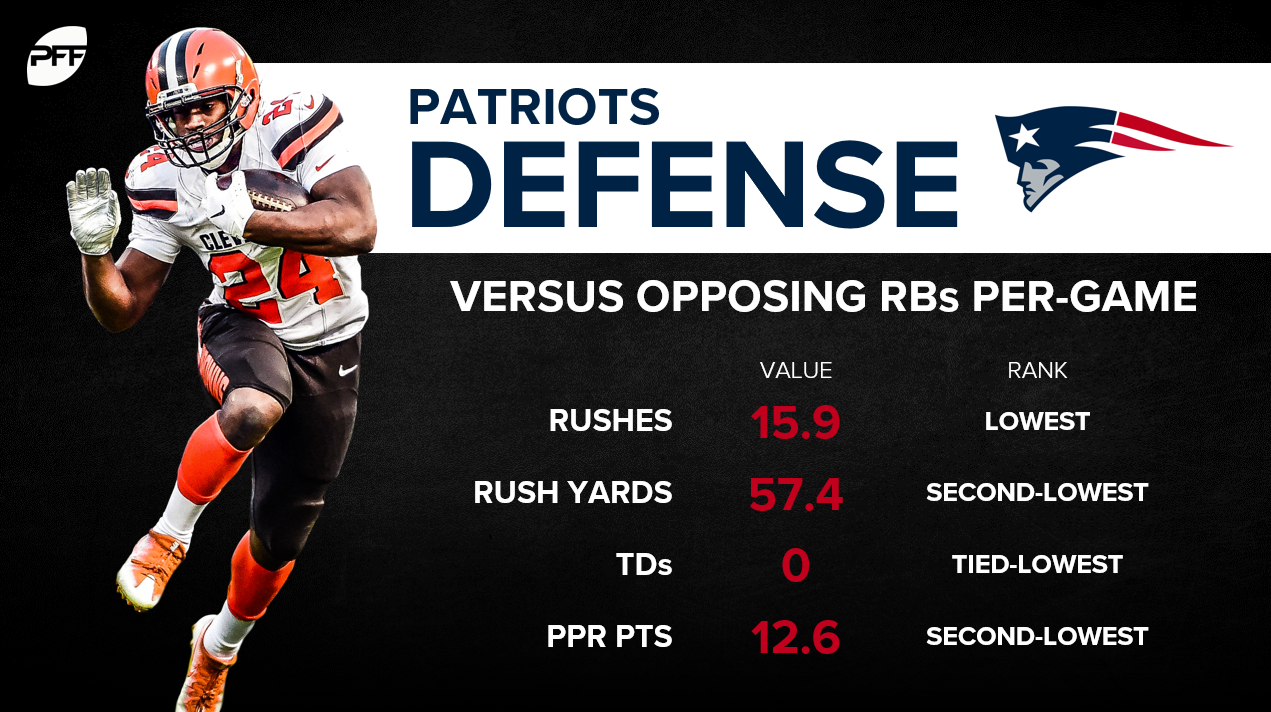 Chubb has been great this year, but against the NFL’s best defense in the Patriots, it will be an uphill battle. Chubb’s been consistent all year, with at least 10 PPR points every week and six touchdowns so far. What is working against him is the fact the Patriots have yet to let up a rushing TD to a running back this year. It is also likely to be a negative gamescript for running the ball and Chubb has yet to establish himself as a consistent receiving option. Against the Patriots elite defense, it is hard to justify having any ownership on Chubb this week.

No. 1 WRs have really struggled against Denver and Chris Harris this year. After Tyrell Williams had 105 receiving yards Week 1, the Broncos started to use Harris more as a shadow CB against the opposing team’s top wide receiver. This has limited players like Davante Adams, Keenan Allen, D.J. Chark, and Allen Robinson all to under 60 receiving yards. With Hilton likely to see a lot of Harris, the Colts should focus on exploiting a different matchup.

The outlook on Engram going forward is starting to get cloudy as the full arsenal of weapons are back. Golden Tate was suspended the first four games, and Barkley and Sterling Shepard have missed a few games. Shepard sounded close to playing in Week 7, so we will likely see him back this week. This lowers the overall target share for a guy like Engram. Despite being in a positive gamescript last week, Engram only had 4 targets. Expect Tate, Shepard, and Barkley to limit Engram going forward, and his salary is not reflective of his diminishing fantasy value yet as the TE4 and TE5 on DraftKings and FanDuel, respectively.

Brown has been a model of consistency this year, topping 50 receiving yards in every game. This week he draws his best matchup yet against the funnel defense that is the Eagles. They have allowed the most fantasy points to WRs this year. Brown has the 15th-most air yards and is the No. 1 option against this bad secondary. The Eagles have shown the ability to allow WRs to beat them deep, most recently Stefon Diggs. Brown’s average depth of target of 14.6 yards highlights his downfield skill. Brown should be able to beat the Eagles secondary down the field at least once and has upside of 100-plus yards and a touchdown.

Hopkins had fantasy players panicking after his cold stretch in Weeks 2-6, given how consistent he has been in recent years. Week 7 is likely to be the start of a Hopkins explosion as Will Fuller’s injury should allow Hopkins to see an even larger target share. In seven games with Fuller playing, Hopkins saw 29% of the targets last year. In the nine games without him, that target share increased to 33%. So far this year, he sits at a 29% target share. Against a Raiders secondary that has allowed the fifth-most fantasy points per game to WRs, Hopkins could have a monster game.

Gurley has been inefficient this year, but if there was ever a week for him to get in open space and get some chunk plays, it is this week against the Bengals, who have allowed 4.9 yards per carry to running backs this year and the second-most receiving yards to RBs. The Rams have started to use Gurley as a receiver more like they did last year with 10 targets against the Bucs, 5 against Seattle, and an end-zone 13-yard wheel-route touchdown this past week. This adds to his weekly floor and ceiling to go along with his scoring opportunities he always gets in the red zone. He is tied for sixth in red-zone rushes with 21 despite missing a game to injury. A soft rush defense should give Gurley more room this week and he can always punch it in when the Rams get in the red zone.