Each week in this space, I’ll be highlighting the players I’m building most of my lineups around on that week’s main slate. Lock these guys into lineups and go from there. Check out below for Week 3.

There’s really no scenario where you’d be wrong to build a DFS lineup around Mahomes. Even if he has a rare bad week, it doesn’t make it a bad investment. But this week — playing his first-ever dome game against a Lions team that won’t have top cornerback Darius Slay at full strength even if he does play and with a resurgent offense that might be able to keep up with the Chiefs — Mahomes is especially appealing. He’s worth paying up for.

Between Chris Carson’s fumbles and Rashaad Penny’s injury, the Seattle running game at the moment is not the big strength we might have expected it to be. Meanwhile, Seattle’s defense, which we might have expected to be rejuvenated after the acquisition of Jadeveon Clowney, holds our No. 22 defense grade. Even worse? The Cardinals’ defense. Expect a shootout. 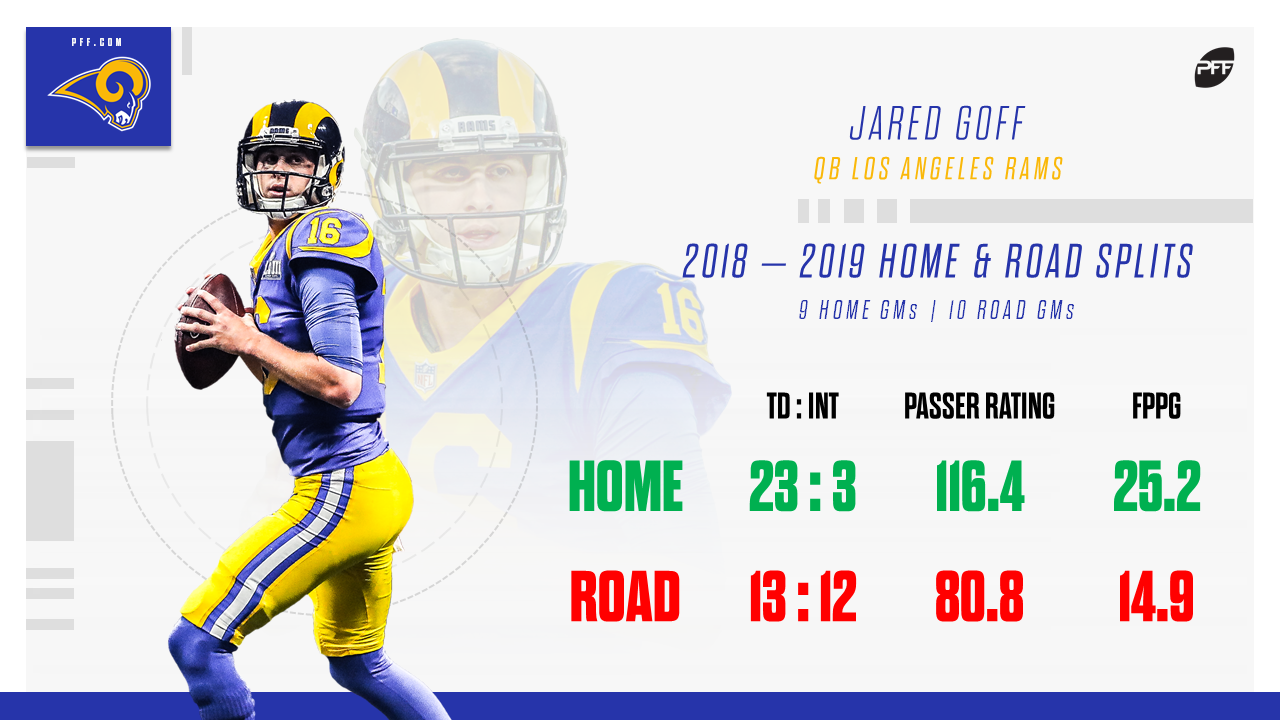 Among qualified quarterbacks, Tom Brady has the fourth-best passer rating this year, at 116.5. Mitchell Trubisky is 29th, at 81.3. Why those guys? Well, since the start of last year, Goff has a 116.4 passer rating in home games, 80.8 on the road. So he basically is half Brady, half Trubisky. Add in a matchup against the Buccaneers, who have a good run defense but are suspect against the pass, and this could be a great Goff week.

Obviously, this is contingent on Keenum suiting up Sunday. But assuming he does, he might be the most underrated fantasy quarterback in the league. He’s QB9 through three weeks, ahead of (among others) Josh Allen, Philip Rivers, and Kyler Murray. Even when things could scarcely have gone worse Monday, Keenum still managed 18.6 fantasy points. Now against a New York defense that has the worst PFF coverage grade in the league at 32.0? Keenum’s fantasy stock is still high. (And if he’s out, his replacement — Colt McCoy or Dwayne Haskins, we’ll see — would be cheap enough to still warrant a long look.)

This is an excellent week to pay down a bit at running back. Saquon Barkley is hurt. Ezekiel Elliott and Alvin Kamara are off the main slate. Dalvin Cook and Todd Gurley have awful matchups. There is one big name to look long and hard at (more on him in about one line of text), but other than him, this is a good week to consider savings.

You want bell cows in your DFS running back slot. There are now bell-cow-ier players in the league right now than McCaffrey, who is averaging almost nine snaps per game more than any other running back so far this year, after topping the list by 77 snaps a year ago. He’s seventh among running backs in yards per carry and fifth in targets. Enjoy.

The Colts are at home, are 6.5-point favorites against an Oakland team that has the third-worst run-defense grade (56.6) and the third-worst EPA/play allowed at 0.183, and T.Y. Hilton might not be healthy. Giddy up.

Jackson is a digging-deep play for those in search of savings, but we’ve already seen two teams’ No. 2 running backs crack double-digit carries against the Dolphins (Gus Edwards had 17 in Week 1; Tony Pollard had 13 in Week 3). There’s no need to let No. 1 backs face too much punishment in likely blowouts. Expect Jackson to have a season-high workload Sunday.

When Watkins lines up outside (which, per our WR/CB matchup chart, he does slightly more than half the time, he’ll likely draw in coverage Darius Slay, who is banged up and might not even play. If Slay can’t go, his replacement, Mike Ford, allowed a 128.6 passer rating in coverage last year. And when Watkins lines up in the slot, his matchup there, Justin Coleman, has been the most heavily targeted slot corner in the league, five more than anyone else. Either way, Watkins is in a good place to follow through on his massive target load so far.

The aforementioned home/road advantage for Goff should filter to his receivers, primarily these two, who will be the team’s top slot weapons. That counts especially for Kupp, who runs nearly three-quarters of his route from the slot, has the fifth-highest target share in the league, and will be covered by M.J. Stewart, PFF’s worst-graded slot corner since the start of last year.

Lockett got off to a slow start, with only a pair of targets in Week 1. Since then, he’s had a massive 25 targets the last two weeks, trailing only Keenan Allen around the league. Now he draws an Arizona defense and a cornerback in Tramaine Brock who has allowed the second-highest passer rating in coverage (145.8) of 45 corners who have played 100 coverage snaps.

The Giants aren’t a good team, but — especially with Saquon Barkley injured — there is a definite appeal to the team in the right matchup, because there are so few realistic options. Against a Washington team that has been easily picked apart this season, you can use Daniel Jones in a nice spot, and then you just have to answer “Shepard or Evan Engram?” And Shepard — who will draw some combination of Jimmy Moreland (57.6 PFF grade) and Josh Norman (66.0) — is the choice here.

I’ve hit Williams several times this week, so I’ll keep it short and sweet: Williams is third in the league in red-zone targets. DeVante Parker and Jakeem Grant have much harder matchups. If a Dolphin scores in Week 4, Williams is my bet.

Richardson has scored in back-to-back weeks and just had his best game in Washington in Week 3, catching 8-of-9 targets for 83 yards and a score against Chicago. The Giants' defense is a few miles shy of the Bears'. And with Terry McLaurin popping up with a hamstring injury late in the week and promising massive Week 4 ownership, Richardson makes for a savvy pivot.

The Falcons held tight ends scoreless in Week 1! … because they were blown out by the Vikings and Kirk Cousins only attempted 10 passes. Since then, they allowed 17.2 PPR points to Zach Ertz in Week 2 and 16.3 to the combination of Eric Ebron and Jack Doyle in Week 3. And now, Keanu Neal’s injury makes them even more susceptible to tight ends. Walker’s been quiet since his huge Week 1, but this could be a good spot for him. 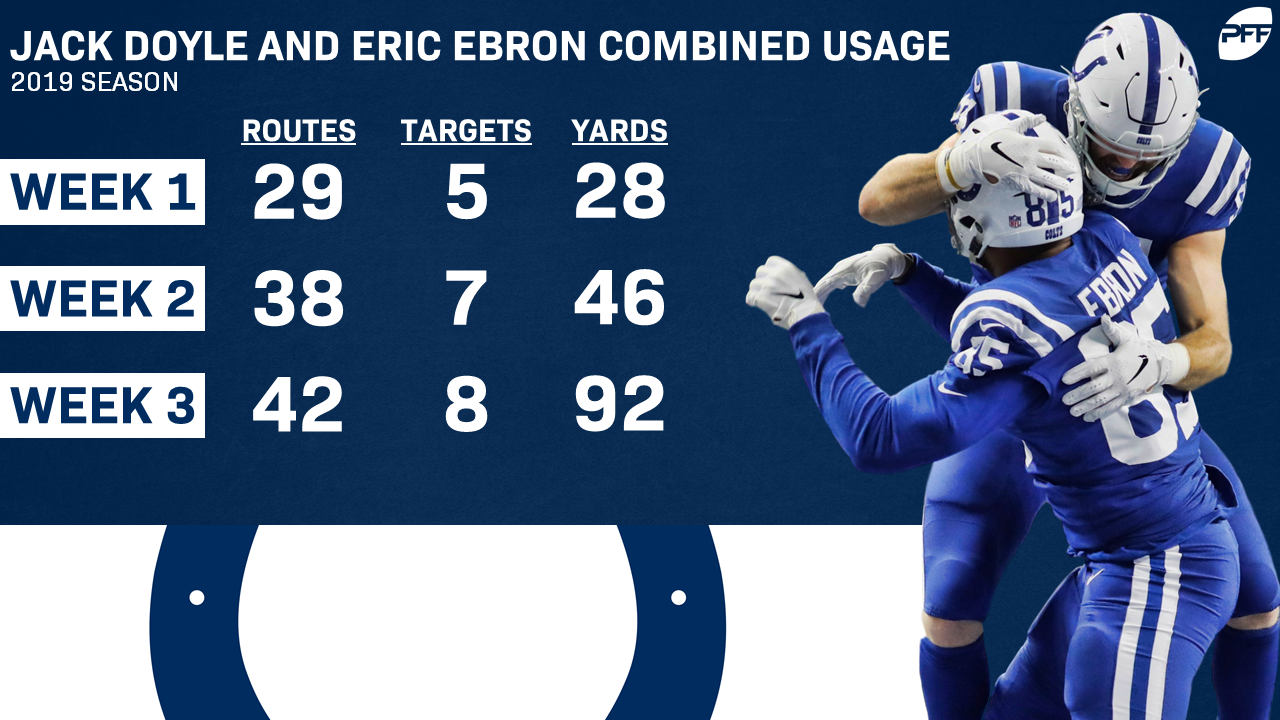 Speaking of Ebron and Doyle, just like the aforementioned Marlon Mack, Hilton’s absence could help Ebron and Doyle, especially as they face Oakland S Curtis Riley in coverage, who has allowed a league-worst 2.70 yards per route covered.

The obvious play of the week. As long as Arizona is allowing every tight end to go against the team to finish as a top-two weekly finisher, you have to play tight ends against them. Nick Vannett’s departure is just icing on that cake.