Each week in this space, I’ll be highlighting the players I’m building most of my lineups around on that week’s main slate. (Most of these locks are for tournaments, though I’ll do my best to differentiate where needed.) Lock these guys into lineups and go from there. Check out below for Week 10.

This weekend’s Buccaneers/Saints game has an over/under of 51, highest on the week’s main slate. They could set it at 71 and I’d be tempted to take the over. The Buccaneers are the league’s biggest pass-funnel this year, with an elite run defense and a pass defense that could be worse if they just didn’t have secondary players, but not by much. The Saints have an excellent run defense as well and, with Marshon Lattimore out, could struggle in pass defense against two of the league’s best receivers. Winston and Brees should be big-time performers this week.

Here’s the thing with DFS salaries this week, especially on DraftKings: It has gotten difficult. Salaries have all spiked lately, making lineup construction more difficult. As such, paying down at quarterback (particularly in tournaments) so you can spend more elsewhere is a very useful strategy. And because of that, Allen should be a big play this week. He just set a career-high in passing yards in Week 10 with 307 despite playing in heavy snow, and this week he gets an Atlanta defense allowing a league-worst 113.2 passer rating with a third-worst 43.4 team PFF pass-coverage grade even after its surprising shutdown of the Saints last week.

It’s true that Zeke has not been nearly the factor as a pass his pass-catching breakout of 2018. It’s also true that, this week at least, that shouldn’t matter. Per our points allowed matchup chart, the Lions have allowed the second-most PPR points per game to opposing running backs, and they have the fifth-worst PFF run-defense grade (60.0) and fourth-worst tackling grade (43.4). With Darius Slay likely covering Amari Cooper, we can expect more Elliott usage in a nice matchup. 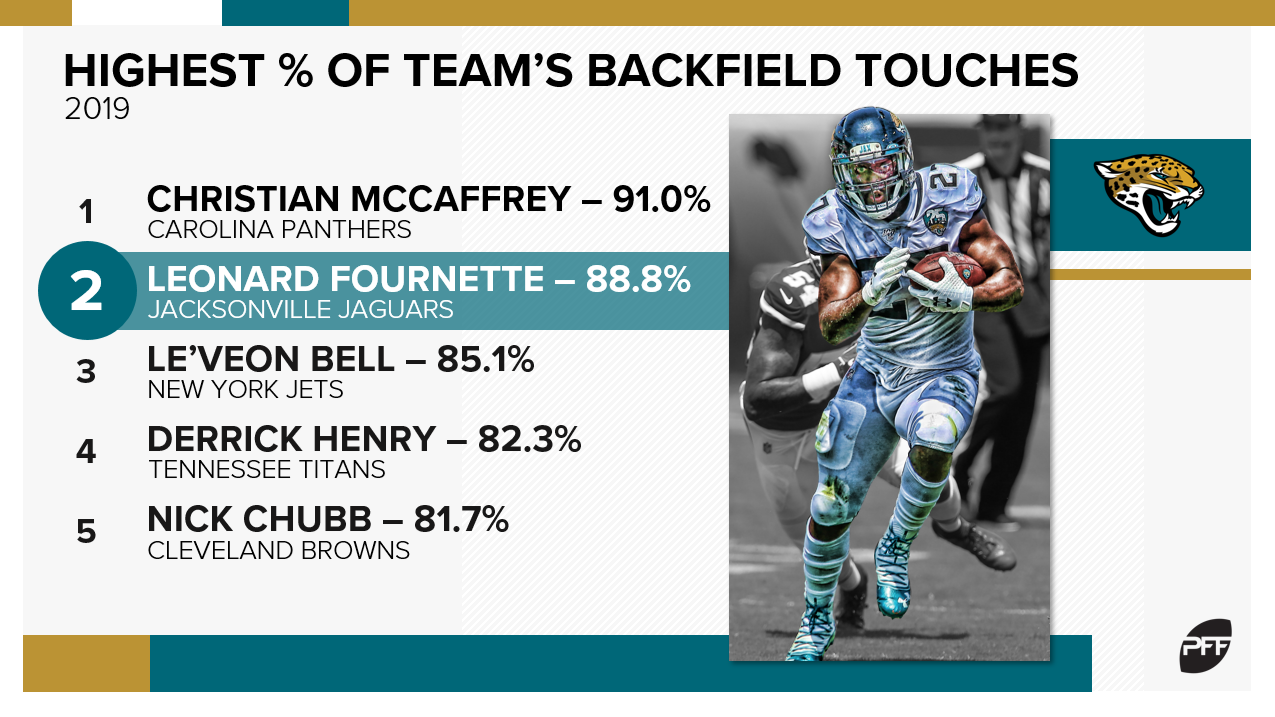 The first thing you want out of a running back is playing time. Fournette is second in snaps among running backs, at 516. The second thing you want is a dominating workload. Fournette has gotten 88.8% of the Jaguars’ backfield touches this year, second in the league. (Unsurprisingly, Christian McCaffrey is the only one ahead of him in both categories.) The third thing you want is production and, while Fournette is only RB9 so far this year, he’s third in scrimmage yards. Only touchdowns (Fournette has only one despite 214 touches) is holding him back, and that’s something that mere luck should fix.

The obvious thing working against Jacobs this week is that he is the polar opposite of a contrarian play; our DFS ownership projections have him among the 10 most-rostered players on both DFS sites this week, and if anything I think those are on the low side. The reason for this is obvious; Jacobs has averaged more than 20 PPR points per game this season in Raiders wins, and with Oakland a 10-point favorite against a woeful Cincinnati run defense this week, we can expect Jacobs to get as many carries as his rookie legs will allow.

Only one non-Carolina defense (the Chiefs) has allowed more than 12 touchdowns to opposing running backs all season. Carolina has allowed 12 touchdowns to running backs … in just their last four games. Hill should have a workhorse job this week, with Devonta Freeman and Ito Smith out and no other Falcons back getting any real work this year, and has that great matchup and a friendly price tag. He’ll be a popular play, but worth it.

As mentioned above, you can’t really give me enough shares of this game. The last time they played, Godwin had a 7/125/2 line, while Thomas managed 11/182/2. Evans managed no receptions on 2 targets, but of course that was in shadow coverage from the out-for-this-week Lattimore. With Lattimore out, our WR/CB matchup chart shows that Evans will see more P.J. Williams and/or Eli Apple in coverage, and … look, things are great, all right?

McLaurin has a great chance to get back on the good side this week after three down games, with an extra week to prepare (for both him and Dwayne Haskins) against a Jets defense that has allowed the second-most PPR points per game to opposing receivers and third-most to outside receivers. He’ll face Arthur Maulet primarily in coverage, who had all of 7 defensive snaps this season before entering the lineup last week.

The upside here is obvious, with the Eagles struggling against opposing receivers for years now. And as our Scott Barrett noted in his Week 11 start/sit advice, Sanu has become an outside receiver in two games with the Patriots, with almost two-thirds of his targets coming out there and Julian Edelman maintaining his slot role.

One more piece of this game on my plate. With George Kittle and Austin Hooper out this week, Travis Kelce and Hunter Henry off the main slate, Evan Engram and Jimmy Graham on a bye, and question marks all over the position, Cook has skyrocketed in my rankings, up to No. 3 at the position this week. Everyone makes jokes about the Cardinals being the cheat code for opposing tight ends, but the Buccaneers are almost as bad against the position, and with not much among Saints receivers after Michael Thomas, Cook should see plenty of targets. 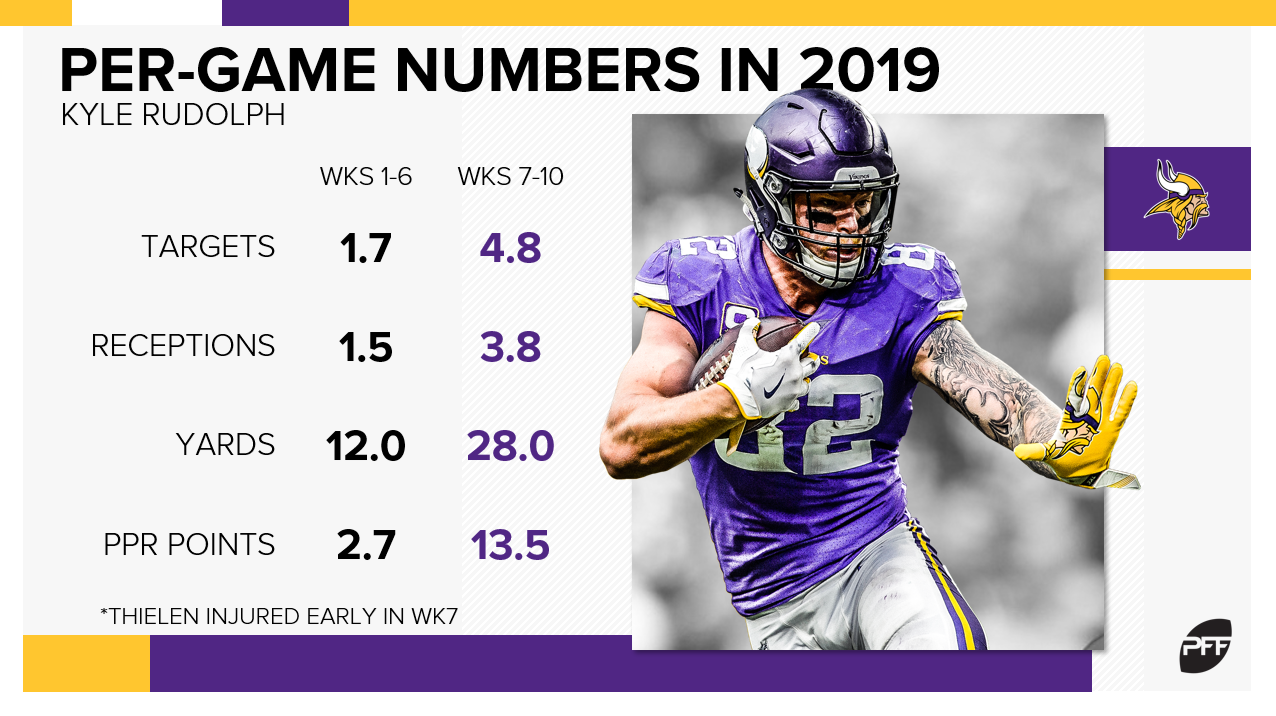 I noted this in my piece on Week 11 fantasy sleepers and busts, but I’ll reiterate it here: Since Adam Thielen got hurt early in Week 7, Rudolph has been the No. 4 fantasy tight end, averaging 13.5 PPR points per game. He was essentially not a part of this offense prior to that, but as long as Thielen is banged up and/or out, Rudolph’s a must-start in fantasy.