Who are the best fantasy football plays for building an optimal DFS lineup in Week 5 of the 2018 NFL season? As we do every Saturday, this piece brings you the DFS locks of the week. 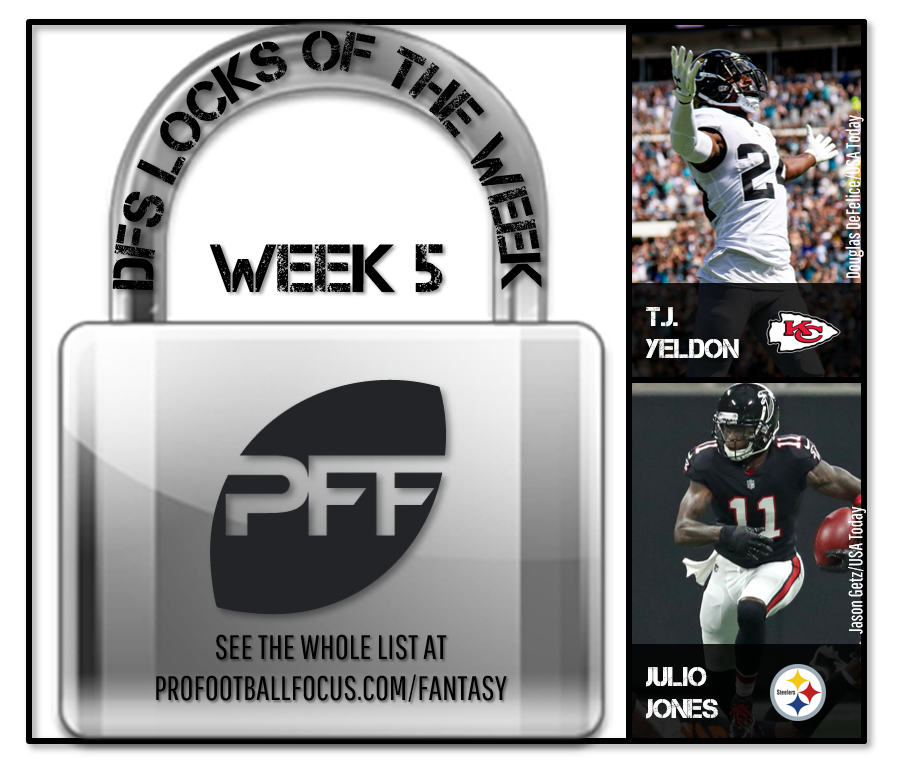 Everything about this matchup comes up roses for Big Ben: The game is at home, the game has a stupid-high over/under (57.5) that keeps rising, and the Falcons have given up over 330 yards and three touchdowns to opposing quarterbacks in three straight games. He checks literally all the boxes.

Ryan will be opposite Roethlisberger in the Steelers/Falcons duel, and things line up perfectly for him, too. The Steelers have given up the third-most overall fantasy points to opposing quarterbacks, including the second-most passing touchdowns (12). Over the past three weeks, Ryan leads all quarterbacks in fantasy points by a wide margin (97, next-closest has 87).

Stafford is a bit too cheap given his circumstances, which finds him playing at home in a controlled environment against the Packers with a high point total expectation (51). So far this year, Stafford ranks in the top 10 in every meaningful category: Dropbacks, attempts, completions, yards, and touchdowns. The Packers were blitzed by a strong passing attack against the Vikings in Week 2 (425 yards and four scores).

Gordon’s Chargers are big home favorites (5 points) against the reeling Raiders, who have given up over 110 rushing yards to enemy backs in three of four games this year, including a 198-yard, 3-touchdown thrashing at the hands of Cleveland last week.

McCaffrey has 68 total touches through three games this year (22.7 per game), making him the third-most-utilized player in the entire league so far this year behind Todd Gurley (23.5 per game) and Alvin Kamara (22.8 per game). McCaffrey draws the Giants in Week 5, who have given up the sixth-most fantasy points to opposing running backs this year, including seven touchdowns in four contests (four rushing and three receiving).

The Falcons have given up the third-most fantasy points to opposing running backs so far this year, including a league-high 42 receptions surrendered to the position (for 310 receiving yards, second-most in the NFL). Conner is averaging over 20 touches per game and ranks in the top 10 in running back targets. He’ll rack up the points in this high-scoring affair. 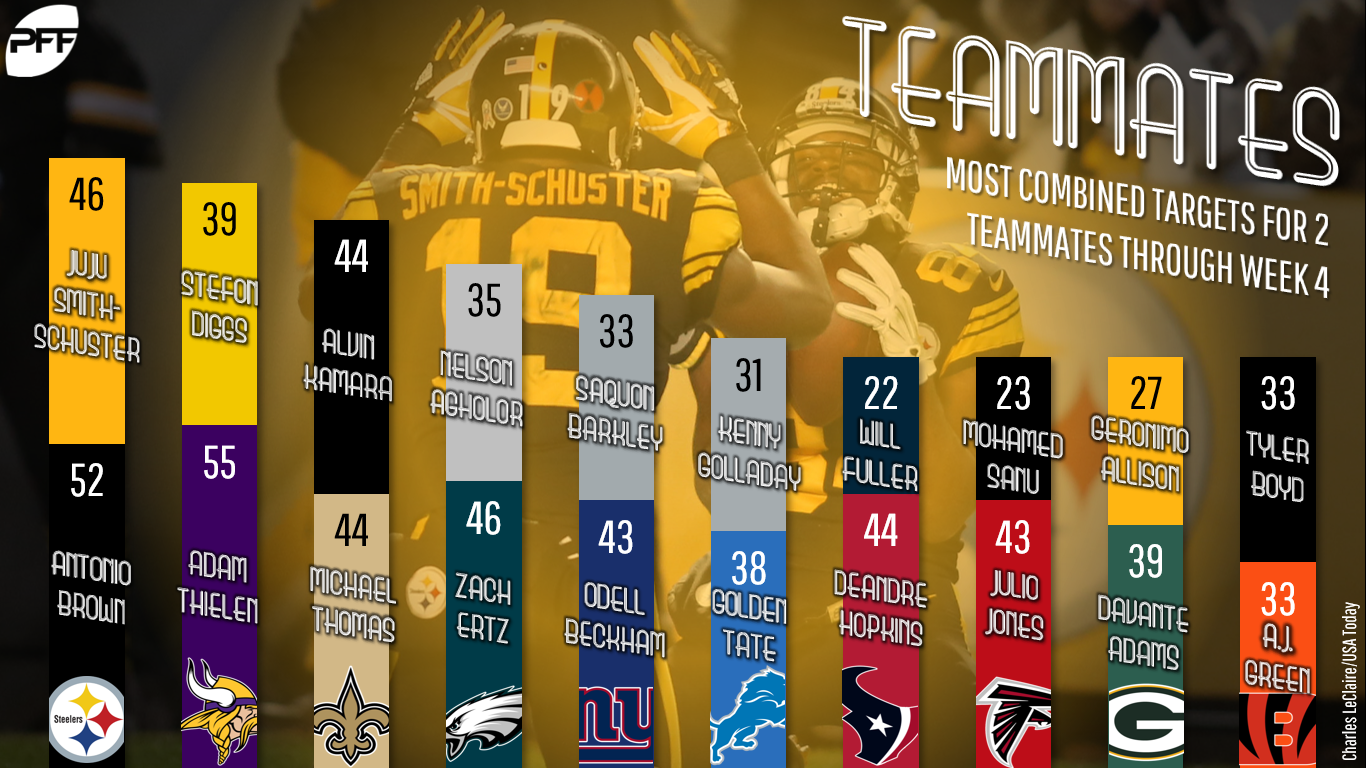 Pittsburgh’s entire offense is essentially a lock this week. Smith-Schuster has the better matchup of the two (against slot man Brian Poole), and Brown is always in play. Pittsburgh’s passing attack is capable of sustaining both of these players. Through four weeks, Browns (52) and Smith-Schuster (46) ranked second and third, respectively, in targets among receivers.

If ever there was a week for a Jones multi-touchdown breakout, a 57.5-point over/under contest against the burnable Steelers secondary would be it. Pittsburgh has given up the third-most fantasy points to opposing wideouts so far this year, and Jones has one of the best individual WR/CB matchups of the week against Artie Burns.

Cooks sits atop our WR/CB matchup chart this week against Seattle’s Tre Flowers, whose PFF grade of 36.4 ranks 89th out of this week’s 90 starting corners. Cooks leads Los Angeles’ high-scoring offense with 26 receptions and 425 yards through four games (yes, he’s quietly averaging over 100 per game).

Jones is primarily attractive on DraftKings, where he is priced below $5,000, but his touchdown upside makes him an option on FanDuel as well. Jones was a late-week addition to the injury report, so you need to monitor his health, but his high 17.7-yard average depth of target makes him a big-play threat against the Packers in a game that is expected to produce over 50 total points. Jones is only slightly trailing Kenny Golladay in targets (31 vs. 28) despite the much higher aDOT (Golladay’s is 10.7 yards).

Valdes-Scantling is $3,300 on DraftKings and $4,800 on FanDuel, so he is as close to a “free square” as you’ll find. With Randall Cobb ruled out and Davante Adams and Geronimo Allison both questionable, Valdes-Scantling has been running with the first-team offense in practice all week. He ran 37 pass routes last week — tied with Allison — and will be in line for another busy day in Week 5, especially if either Adams or Allison miss.

McDonald gives you the cheapest access to the Steelers/Falcons game, which is one reason why we expect him to be among the highest-owned tight ends on the slate. McDonald is simply too cheap given the matchup and his growing usage. He has run 46%, 60%, and 64% of Pittsburgh’s pass routes over the past three weeks, respectively.

Ertz has double-digit targets in all four games this year, and the matchup against the Vikings isn’t quite as scary as it looks: Minnesota has surrendered either 90 yards or a touchdown to opposing tight ends in three of four games (the only game they didn’t was against the TE-less Rams).

According to our TE matchup chart, Kittle has the best individual tight end matchup of the week against the Arizona Cardinals. Kittle also led the 49ers in targets (8), receptions (6), yards (125), and touchdowns (1) with C.J. Beathard at quarterback last week.