If you’re looking for the best fantasy football advice to build an optimal DFS lineup in Week 4 of the 2018 NFL season, you’ve come to the right place. As we do every Saturday, this piece brings you the DFS locks of the week.

The Falcons/Bengals has the highest over/under of the slate (53.5). Ryan will be playing as the home favorite against a Bengals defense that has given up the seventh-most fantasy points to opposing quarterbacks this year. Ryan is also riding hot right now, with nine total touchdowns in the past two games.

Dalton is too cheap considering the matchup. He’s the other quarterback in the should-be-high-scoring affair against the Falcons, who have given up the fourth-most fantasy points to opposing quarterbacks this year — including 330-plus yards and three touchdowns against in each of their past two games. With the Bengals expected to score over 24 points, it’s far more likely than not that Dalton returns value this week.

Yeah, I’m doing it. The Browns draw the Raiders, who are a bottom-12 team so far this year against enemy quarterbacks while surrendering over 8.1 yards per attempt against. Acknowledging the small sample size, Mayfield is our No.5-graded quarterback on the year (he was No. 12 out of 115 in the preseason, too). Per our PFF Greenline product, we expect this game to produce 45.5 points — over the Vegas line of 44.5. Mayfield did see a price bump, but he’s still one of the cheapest starting quarterbacks of the week.

At least until Mark Ingram returns (and probably even then, too), this is just an automatic pick. Not only is Kamara maintaining his ridiculous fantasy scoring on a per-touch basis this year, but he’s touching the ball a lot (over 22 touches per game so far). Oh, and he’s seen the second-most carries inside the five among all players and the second-most red-zone targets among all players. Throw in the fact the Saints/Giants game has the second-highest over/under on the slate (50.5), and Kamara is a lock once again.

Gordon has been cruising so far this year with four total touchdowns in three games and the third-most fantasy points among running backs thus far. He has a rosy Week 4 outlook against the Jimmy Garoppolo-less 49ers, as the Chargers are 10-point home favorites — the largest spread of the week. Gordon should see plenty of work as the Chargers look to ice the game in the second half.

Elliott leads the league in rushing yards (274) and the Lions have given up the most rushing yards (450). The puzzle pieces don’t usually match this well. As a bonus, Elliott is a bit underpriced and he’s tied for the team lead in targets with 16, which represents a healthy 20% market share. 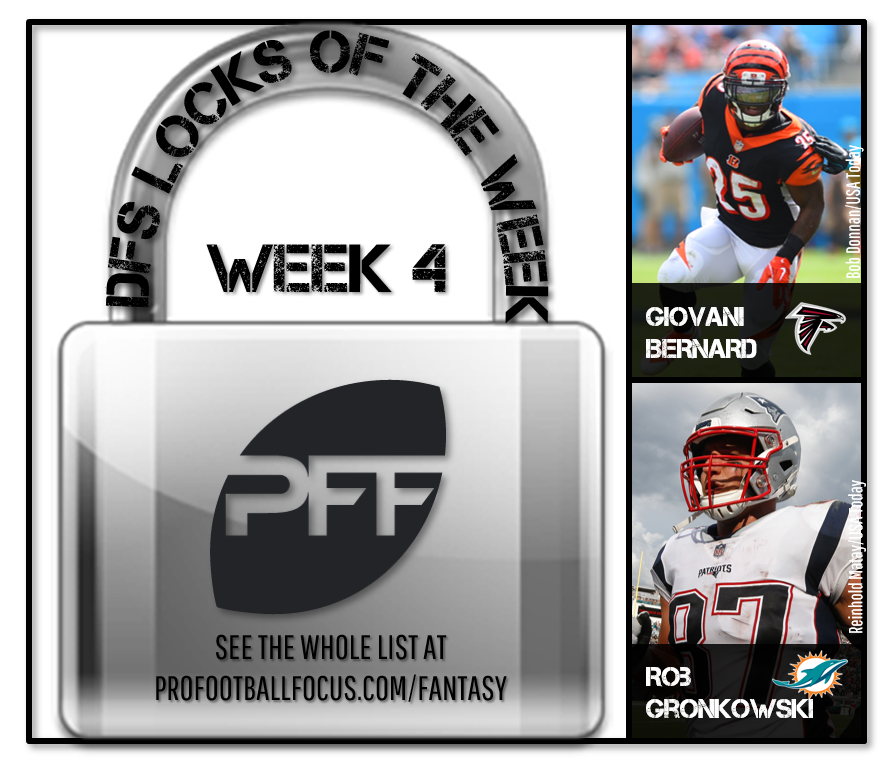 Bernard delivered for DFS players sans Joe Mixon last week with 17 total touches for 86 total yards and a score — including nine targets. His price only increased marginally, and he has an even better matchup this week against the Falcons, who have given up the most receptions to opposing running backs in three straight years (going on four).

There is just no arguing against Thomas’ 38 receptions on 40 targets (95% catch rate) with 398 yards and three scores through the first three weeks. Thomas has the best individual matchup of the week against the Giants, and primarily Janoris Jenkins, who is our 67th-graded cornerback so far this year after giving up 215 yards while in coverage so far this year — fifth-most in the NFL.

Allen has the third-best individual WR/CB matchup of the week against 49ers slot man K’Waun Williams. As a whole, the 49ers defense has given up the ninth-most fantasy points to opposing receivers on the year. Despite the rise of Mike Williams and strong receiver work Gordon has seen thus far, Allen still commands a team-high 22.7% target market share.

Robinson leads the Bears with 28 targets through three games (9.3 per game), representing a 27.7% team target market share. He is the only Bears pass-catcher with over 90 receiving yards (he has 194), and he draws one of the best team matchups in football against the Buccaneers, who have given up the third-most fantasy points to opposing receivers

It’s a Bengals party in my lock article. We’ve already mentioned the Falcons/Bengals as the game with the most expected scoring of the week, and Boyd gives you the cheapest access to this contest. Boyd has run 114 of a possible 131 pass routes (87%) and has posted lines of 6-91-1 and 6-132-1 over the past two weeks.

The Saints have given up the most fantasy points per target to opposing receivers, including the most yards (843) and touchdowns (9). Shepard gets backup cornerback P.J. Williams this week, our No. 84-graded corner out of the 90 starters this week. Williams was abused by the Falcons last week, giving up seven catches for 136 yards and three scores while in coverage. Shepard is extremely cheap, he sees enough volume given his price tag (at least five targets per game), and he has the dream matchup.

Gronkowski is really the only expensive tight end worth paying up for this week. The Dolphins gave up the most fantasy points to opposing tight ends last year, and they gave up 7-101-0 to Titans tight ends in Week 1 of this year before facing the tight end-less Jets and the on-again, off-again Jared Cook. Gronk is their first real test, and he has a good shot of finding the end zone against a Dolphins squad that gave up 10 touchdowns to tight ends last year on a league-high 94 receptions.

Burton and the Bears draw the non-existent Bucs defense, which has given up the eighth-most fantasy points per target to opposing tight ends and the most fantasy points to the position overall, including a league-high 25 receptions and league-high 329 yards. Burton also has the third-best individual TE matchup of the week.

Hooper is simply too cheap for the role he plays, which includes collecting end-zone targets when the Falcons get close to the paint. In fact, Hooper’s two end-zone targets are tied for second-most on the Falcons. This Falcons/Bengals game should have plenty of scoring opportunity, and Hooper will smash value if he scores a touchdown (and he won’t break your lineup if he doesn’t). The Bengals have also given up the fifth-most fantasy points to tight ends.