Continuing our series looking at fantasy football consistency, today we are looking at running backs.

Nailing your running back is crucial for fantasy success. (For the full methodology, check out the intro in the quarterbacks piece from Wednesday.) Four quadrants exist at any given position: high-risk/high-reward, high-risk/low-reward, low-risk/low-reward, and low-risk, low-reward. This visualization and sorting of RBs into the four quadrants allows for an easy understanding of players’ scoring and consistency. Once we’re able to observe the most consistent or volatile players given their average fantasy production, you can more effectively maximize your team’s upside without carrying too much weekly risk, which is crucial for constructing a premier fantasy football team.

The visualization below shows Fantasy Football Calculator’s 50 highest-ranked RBs, excluding rookies or players who missed last season (e.g., Derrius Guice or Jerick McKinnon), per ADP in 12-team, PPR leagues as of Aug. 19. On average, these 50 RBs produced 13.5 PPG – with a minimum of five touches to qualify as a game – with a standard deviation of 8.6 points, producing a 63.7% coefficient of variation. The lower the CV, the less risky the player based on last year’s performance. This suggests that the average top-50 RB should score between 4.9 and 22.0 fantasy points in each week. The average RB from our sample may appeal to the more risk-seeking drafter, albeit more in an RB2 role instead of a foundational piece of his or her team. Relying on an RB1 with this much variance would be very troubling and surely turn your hair grey. Luckily, Figure 1 below depicts certain desirable RBs that present relatively low risk and high reward, such as Todd Gurley, James White, or Alvin Kamara. 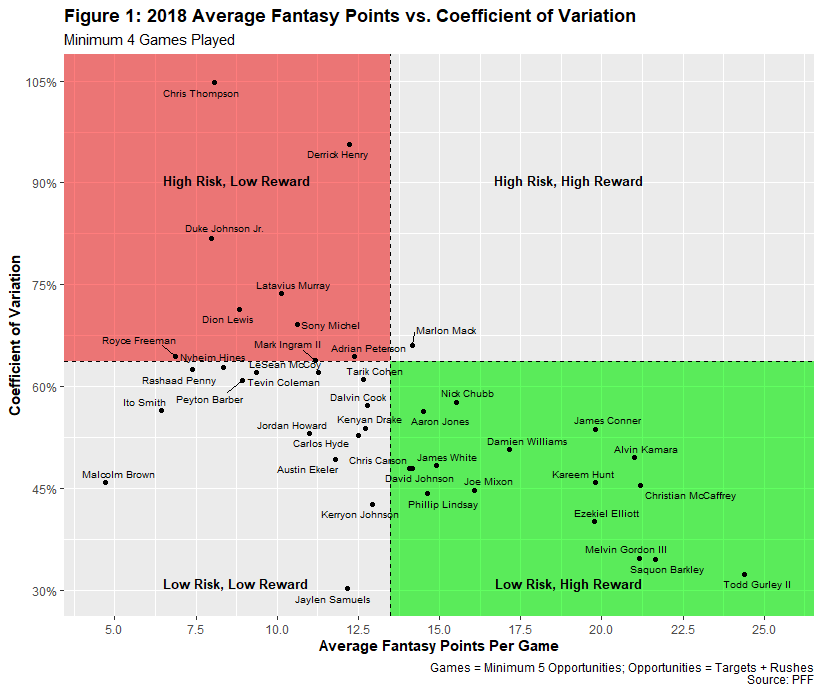 Figure 1 provides us with a great overarching view of the fantasy RB landscape, providing us with a sound perspective of who you can trust as the foundation of your RB corps and who are the volatile, lottery tickets that you stash for upside at the right costs. In a vacuum, drafting two RBs from the LRHR quadrant would provide a great infrastructure for the rest of your team, allowing you to accumulate quantity instead of quality for the other positions. For example, if you took either Kamara, David Johnson, or James Conner as your RB1 in Round 1 and then take the likes of Joe Mixon, Gurley, or Nick Chubb in Round 2 (or even Aaron Jones in Round 3), you’d probably have a sizable advantage over your peers in the RB position group. You’d have two RBs who should maintain minimal risk but great upside each week. However, what happens when we limit our sample to just RB1s and RB2s (i.e., FFC’s top 24 RBs taken in 2019 drafts)?

The following visualization, Figure 2, utilizes the same calculations from the prior data, but it’s limited to just the top 24 RBs projected to be draft per FFC (Saquon Barkley through Sony Michel). Adjusting our dataset to just these top 24 RBs provides a better idea of how starting (assuming two starting RBs per team in a 12-team league) RBs compare against one another in terms of fantasy scoring and volatility. First, the average PPG jumped from 13.5 in the Figure 1 dataset to 16.5 in Figure 2 — a 22.7% spike — while average CV fell by 15.7%, from 63.7% to 53.7%. Simply put, limiting our data set corroborated what we anticipated: RBs drafted earlier generally score more and maintain fewer weekly fluctuations. Second, however, our quadrants have now shifted with formerly LRHR players now becoming LRLR (e.g., Chris Carson) or even HRLR (e.g., Dalvin Cook).

Figure 2 reveals that among the top 24 backs, there are only a handful of foundational RBs, with the likes of Mixon, Chubb, Johnson, and many others shifting left to the “low reward” quadrants. Specifically, our illustration reveals that only eight of the top 24 RBs – or 33.3% – are LRHR players. This group shrinks even further if we remove Melvin Gordon and Ezekiel Elliott, who are still holding out of training camp for new contracts and present increased off-the-field risks.

These data allow us to easily evaluate fantasy opportunity, however it omits the associated costs. Utilizing FFC’s ADP data in consideration with the above illustrations strengthens our ability to determine players to target or avoid. 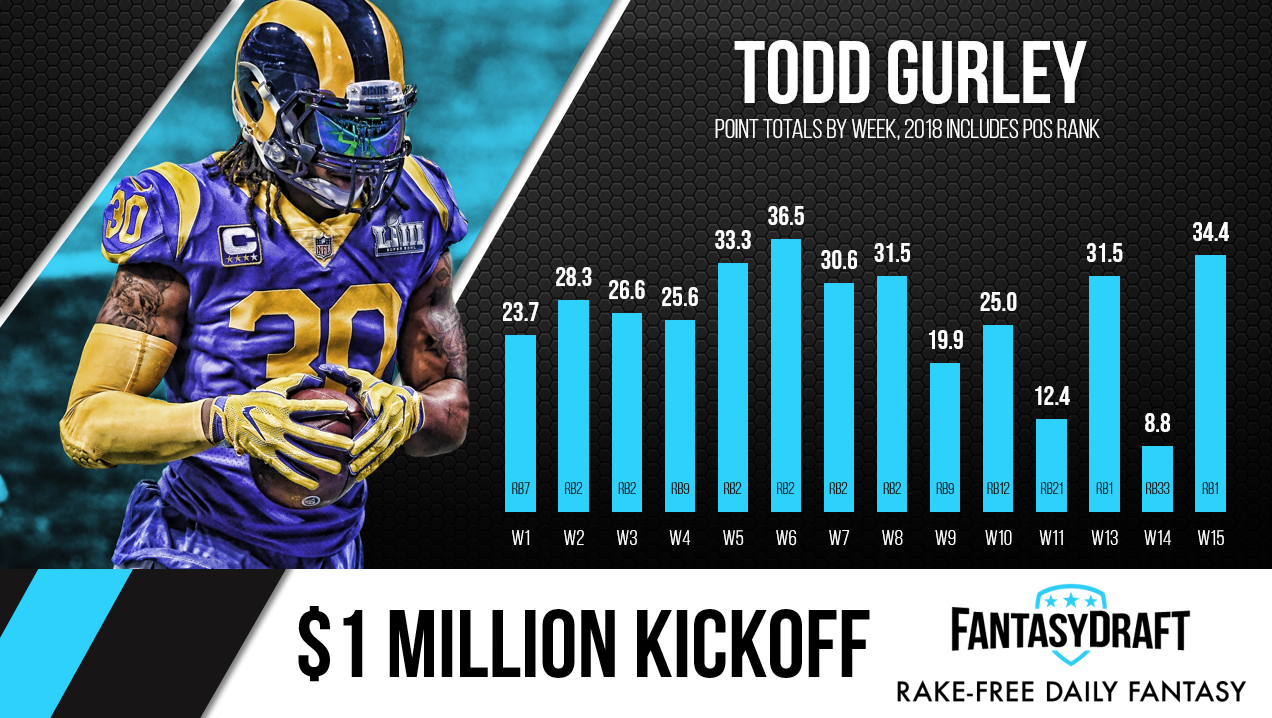 Gurley must be on this list for me. He was the highest-scoring RB on a per-game basis last season and the most consistent. On the low end, based on his weekly averages, he would net 16.5 PPG, which is the average across the top 24 RBs in this sample. His production is absolutely bonkers, and the knee injury hysteria is curbing his ADP to very appealing levels. Going at 2.03 in 12-team leagues for a player that presents this much upside is unparalleled. I’m grabbing him in the second round in virtually all my leagues with little hesitation.

Williams is a hot topic throughout the fantasy football community. Many analysts call him a mediocre talent, while others suggest that he’s quite talented — not elite, but good. He was kicked off his college team at Oklahoma due to allegedly failing several drug tests, went undrafted, and spent multiplate seasons residing in former Dolphins head coach Adam Gase’s RB purgatory. Following Jay Ajayi’s 2017 trade to the Eagles and before getting injured, Williams was the starter above Kenyan Drake. A year later, following the Kareem Hunt release, Williams shined as the Chiefs’ feature back in the final few games and into the playoffs. He presents monstrous upside in the offense with an ADP of just 3.01 – or RB13.

Due to the high draft capital required to select a premier fantasy RB, there are some players that look appealing but simply are not worth the cost. I’d probably take any of these 24 RBs at the right price — even Derrick Henry — and believe each one presents certain upsides with varying risks. However, given the ADP data, there are a couple RBs that I simply won’t touch at their current costs. 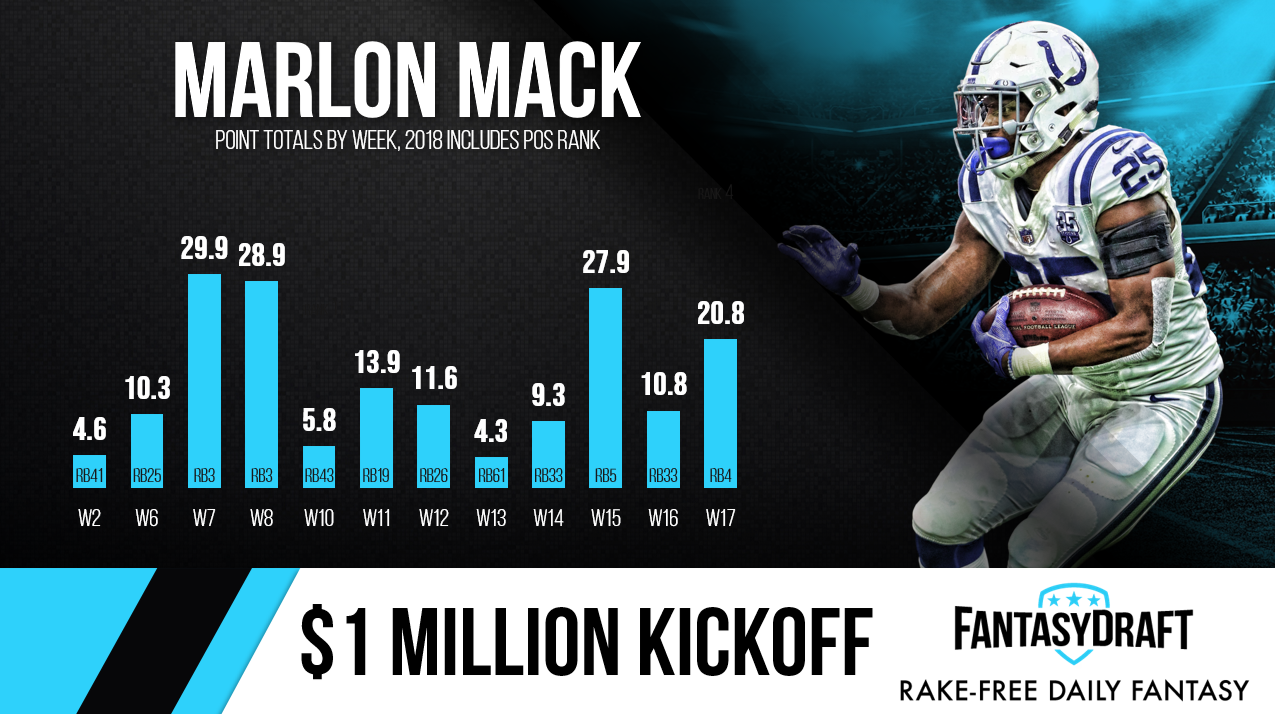 I remember the rookie hype surrounding Mack two years ago when the fantasy community anointed him as the next big hype train. Unfortunately, nagging injuries derailed much of that season but the fantasy community’s hope remained, and Mack came through in 2018 on a much-improved offense under Andrew Luck’s leadership. After missing four of the first five weeks of the 2018 season, Mack broke out in Weeks 6-8, accumulating 401 total yards on 61 touches with four total touchdowns. Mack proceeded to produce some massive performances, like in Weeks 14 and 16 against the Cowboys and Titans, respectively, and during the Wild Card Round of the playoffs against the Texans. However, he also hurt many teams along the way with his inconsistency. Mack was heavily gamescript-dependent, as he didn’t catch many passes and generally only performed well in games where the Colts were winning, and now with Luck gone, who knows how good the Colts will be. Among these top 24 RBs, Mack scored the eighth-fewest PPG, while carrying the third-most volatility, at somewhat steep ADP of 4.03. I’d prefer grabbing Jones (3.06) in the mid-to-late third or Carson (4.02) in the fourth instead — or even just wait and take White (5.02) a full round later in the fifth.

Conner had a wonderful fantasy year — when healthy — filling in for the Steelers during Le’Veon Bell’s season-long absence. Although the Steelers failed to make the postseason, Conner produced very well statistically and carried many of his fantasy owners to those playoffs. Averaging a solid 19.7% PPG higher than the top-24 average last year and once again on a seemingly high-powered offense in 2019 with a great QB at the helm, Conner presents wonderful upside to those that draft him this season. Unfortunately, his current ADP of 1.12 with average volatility for a top-24 RB scares me a bit. I’d prefer going WR-WR at the turn or perhaps selecting a tandem like Julio Jones and Gurley instead. Nonetheless, Conner is a great fantasy football RB for the 2019 and if he were to slip in my drafts to the mid-second round, I’d surely take him over other options.