Succeeding in fantasy football is much more nuanced than simply targeting the players who score the most points. One must consider a range of factors, such as volatility and cost. Additionally, you should understand your own drafting and management style when creating your team — do you prefer players with high floors and limited volatility or boom/bust players that can single-handedly win you a week while also carrying the risk of severely harming your chances to win?

It’s generally good to have a little bit of both types. There’s value in combining Tyreek Hill’s sky-high peaks and deep troughs with Lamar Miller’s high-floor and low-ceiling safety. Mixing and matching may present your team with the best chance to win your fantasy leagues this season.

This article is the first of a four-part series, inspired by Kevin O’Connor’s article on FantasyPros, in which the four major position groups are analyzed, with their 2018 average production and volatility illustrated and discussed. There are four quadrants for any given position: high-risk/low-reward, high-risk/high-reward, low-risk/low-reward, and low-risk/high-reward.

Of course, we should aim to acquire players in the LRHR quadrant, but of course this isn’t always possible after considering cost. Let’s review the data and examine our options.

The visualization below shows Fantasy Football Calculator’s top 18 QBs in average draft position as of Aug. 23 (excluding Kyler Murray, who is a rookie). In games they had at least seven dropbacks, these 18 QBs averaged 20.4 fantasy points per game with a standard deviation of 7.7 points, producing a 7.9% coefficient of variation, which is the statistical measurement of this ratio; the lower the CV is in our context, the less risky a player is. This means that, assuming a normal distribution, the average top-18 QB will usually score between 13.0 and 27.9 fantasy points in each week. The average player in our sample situation would appeal more to the risk-seeking fantasy players at the right cost; 27.9 points can truly help your team win but 13.0 may crush your chances as well. However, there are plenty of players that out-produce the average QB from our sample. 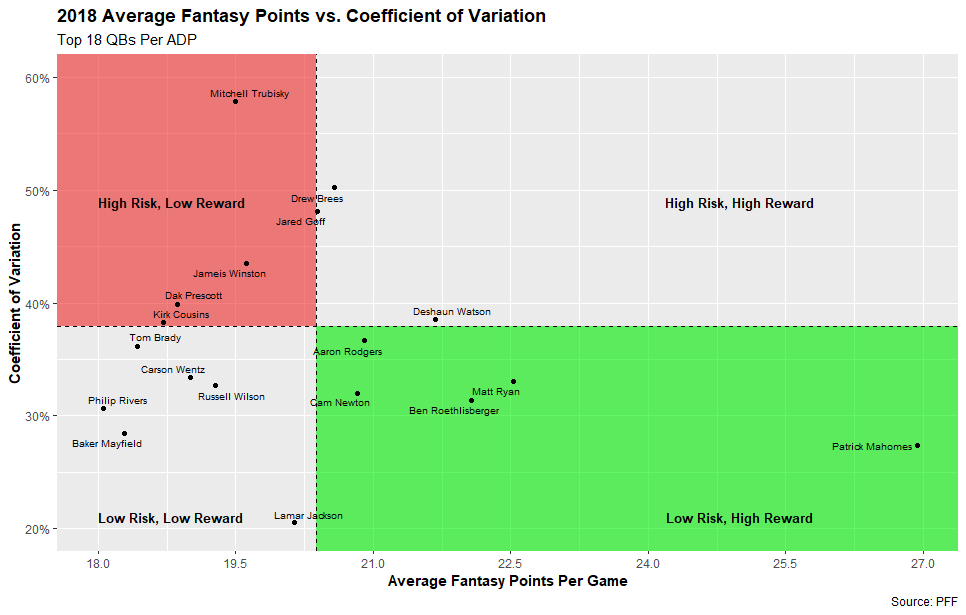 There are five players that fall within the LRHR quadrant: Patrick Mahomes, Matt Ryan, Ben Roethlisberger, and Cam Newton, with Aaron Rodgers just barely on the outside. These players presented the best combination of scoring upside and limited weekly volatility last year.

Mahomes was the clear outlier last year, as he produced the most fantasy points — and the second-most all-time in standard scoring (I really miss the prime LaDainian Tomlinson years) — while retaining a relatively low CV. Lamar Jackson was the only QB in the sample who maintained a lower CV. Mahomes simply scored a ton of points and probably never cost your team with a dud week. However, Mahomes generally requires a hefty price, with a third-round ADP in 12-team leagues (3.01), which is why I probably won’t draft him unless he falls to me, but is certainly worth the price if you believe that he’ll have similar success this year. He provided such a massive advantage over even the next best QBs. He’s just so good. 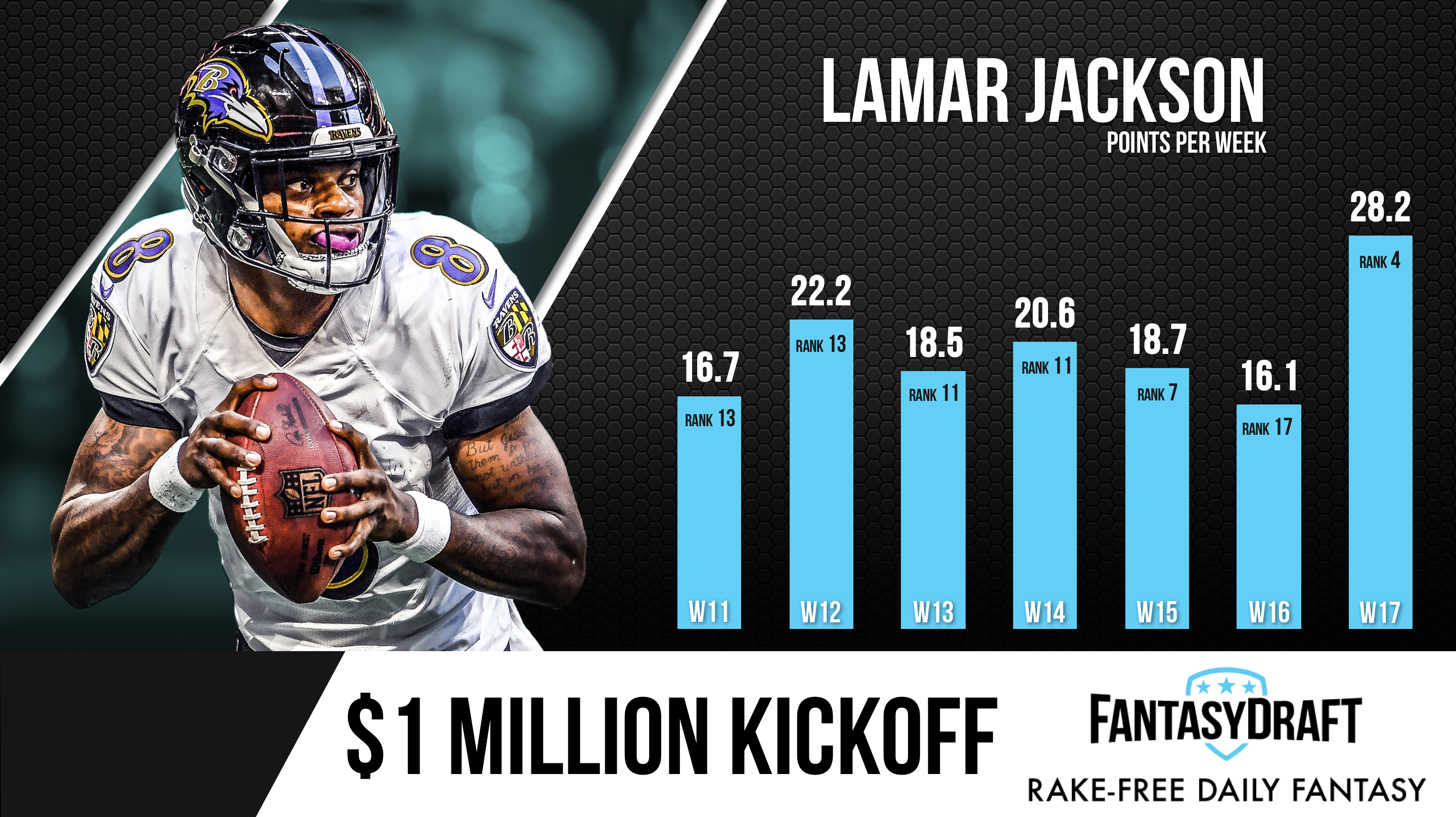 Jackson was the safest quarterback last year in games in which he had at least 7 dropbacks (our cutoff to remove random outlying weeks), producing the lowest CV among all 18 QBs in this sample. In fact, his CV was 25.2% smaller than the next lowest, Mahomes. That’s insane. Additionally, he didn’t sacrifice general production either, as he averaged 20.1 FPPG, which was only marginally below the top-18 QB average for the sample. His rushing ability and dynamic skillset presents immense safety and upside as he hopefully develops into a more complete QB in his sophomore season. With an ADP of 10.11, he’s definitely one of my — and Scott Barrett’s — favorite QB targets this season.

Although Rivers resides within the LRLR quadrant, with a scoring average of 18.1 PPG – lowest among these QBs — and CV of 30.7%, fourth-best in the sample — hear me out. Rivers presents consistency and a cheap option if you implement a passive approach to drafting QBs this season, as his current ADP is just 11.06 — among the likes of the aforementioned Jackson and Tom Brady. Depending on the other teams in your league, it’s conceivable that Rivers may fall even further, presenting great value to your squad as you prioritize accumulating advantages at skill positions.

Based on last year’s performance, there are several QBs that you should probably avoid as starters out of the gate, like Josh Allen and Sam Darnold, unless you believe they’ll take massive strides like Jared Goff did in his sophomore season. Nonetheless, relative to the other top-18 QBs, the following QBs generally offer less upside in terms of FPPG while presenting excessive risk that simply isn’t required as a starter in one-QB leagues at their prices.

The former rookie of the year is entering the final year of his initial contract and is allegedly seeking upward of $40 million per year from the Cowboys. Although he’s led the Cowboys to the playoffs in two of three years thus far in his young career, Prescott presents uncertainties in fantasy football this season. Among the top 18 QBs per ADP this season, Prescott offers the fifth-lowest average scoring production while carrying the fourth-most risk according to CV. Although his ADP of 13.01 is rather low, you’d be better suited drafting Ben Roethlisberger, Lamar Jackson, or Tom Brady — all of whom retain marginally lower ADPs — instead. 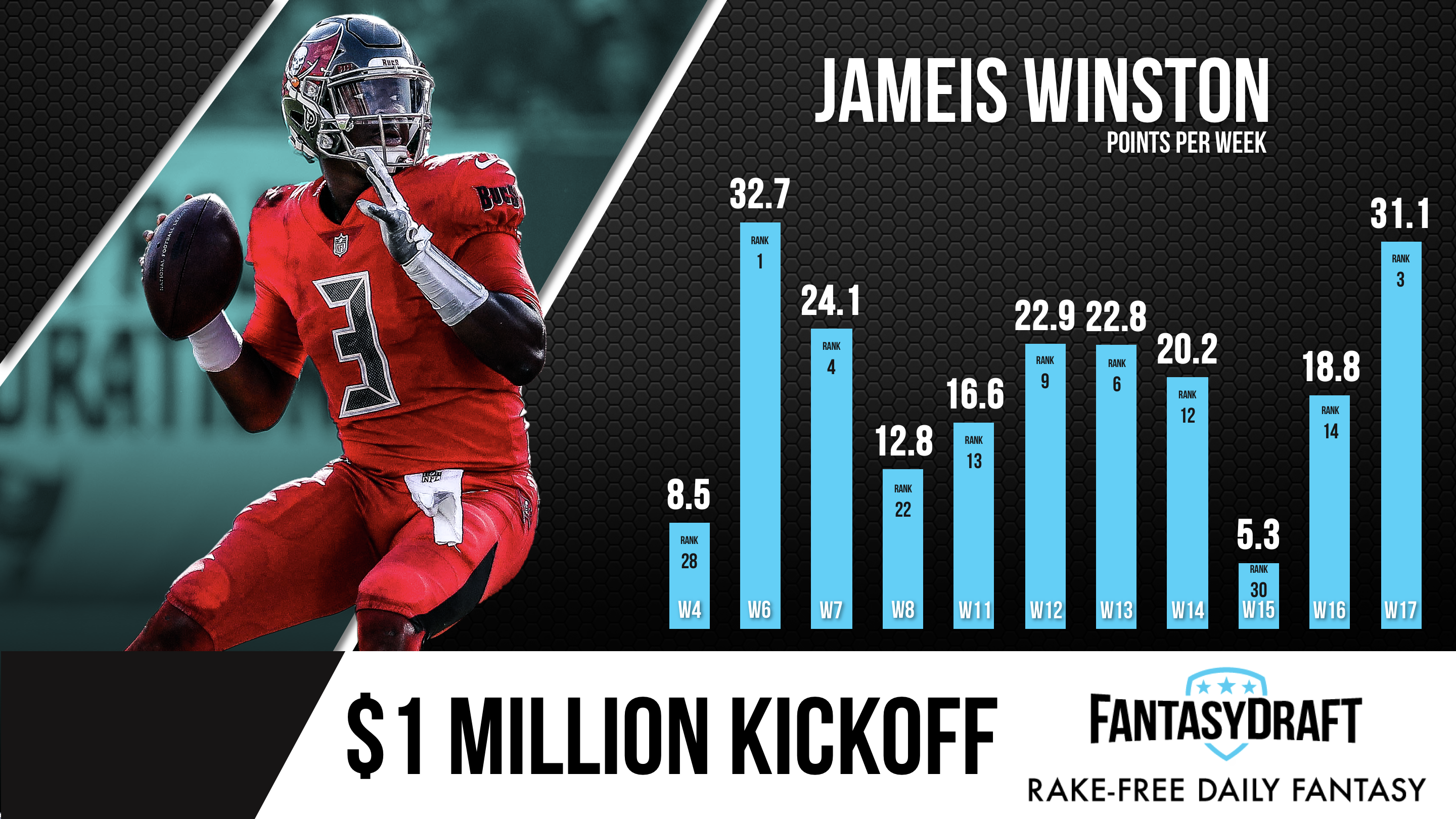 Another somewhat promising young QB in the final year of his rookie deal, Winston is seeking to earn a second deal from the Buccaneers. He began last season suspended for the first three games, followed by notoriously competing with Ryan Fitzpatrick in Dirk Koetter’s QB carousel. Nonetheless, in qualifying games, Winston averaged 19.6 FPPG but bore a 43.5% CV — third-most among these 18 qualifying QBs. With an ADP of 10.06, I’d prefer waiting and taking Jackson or Rivers in the 11th. However, Winston does offer the type of upside — he was solid in games he started and completed last year — you may want to seize on your bench in case he fixes his high turnover propensities.

As much as I hate to do this, I must put Brees in this list. He maintained the second-highest overall PFF grade at any position last year (94.7), beating Mahomes’ 93.2 and coming in barely below Aaron Donald’s 95.6, clearly conveying that he remains an elite NFL player. However, his fantasy numbers just simply don’t reflect his amazing real-football performance. Among the 18 QBs included in this dataset, Brees was only adequate in scoring production — just 0.09 PPG above the average PPG — but retained the largest CV of the group at 50.2%. In fact, his CV was 38.2% — or 13.9 percentage points — greater than the average top-18 drafted QB, including 57.0% and 60.0% greater than Cam Newton’s and Roethlisberger’s CVs, respectively. To make matters worse, these two QBs fell within the LRHR quadrant of our sample and retain lower ADPs than Brees’ 7.10 (8.07 and 11.10, respectively). It’s apparent that both Newton and Roethlisberger present much greater value than Brees without the accompanied risk.

As you proceed into your upcoming fantasy football drafts, remember that quarterback is an incredibly deep position this year. You want to maximize production, of course, but you don’t need to spend high capital on seemingly average players for fantasy. Understanding the ebbs and flows of the draft is key; capitalizing on scoring, while minimizing weekly volatility and cost, should be your foundation for success.