Best and worst quarterback strength of schedule for 2020 fantasy football

Keep in mind that fantasy strength of schedule data is a small piece of the overall puzzle and should not be considered the be-all, end-all in your fantasy decision-making process. While the difference between the best and worst schedules may look significant, it isn’t. There isn’t anywhere near as wide of a gap between the best and worst defenses in the NFL as there is at the college level. In fact, the best schedule at quarterback this year is only 2.8% better than the worst schedule at quarterback. So resist the temptation to move players up or down significantly based on their schedules. Instead, use this information to tweak your rankings and break ties between players who are very close on your draft board.

Below, you’ll find the 2020 fantasy football quarterback strength of matchup sorted in order from the best to worst schedules. We also included the strength of matchups for the fantasy football playoffs in Weeks 14-16. The chart is color-coded with a heat map to give you a better sense of the good and bad schedules at a glance. The greener the box, the better the matchup. Likewise, a red box indicates a bad matchup.

Matchups are also ranked for each week, with No. 1 being the best matchup. Keep in mind that the bye weeks will mean that the worst matchup for the week isn’t always 32. For example, in Week 9, there are four teams on bye, so the worst matchup is ranked 28 for that week. You’ll also notice that Washington is the best matchup for quarterbacks based on PFF Grades. However, the Redskins are on their bye in Week 8, so the Titans get the No. 1 matchup for the week against the Bengals. 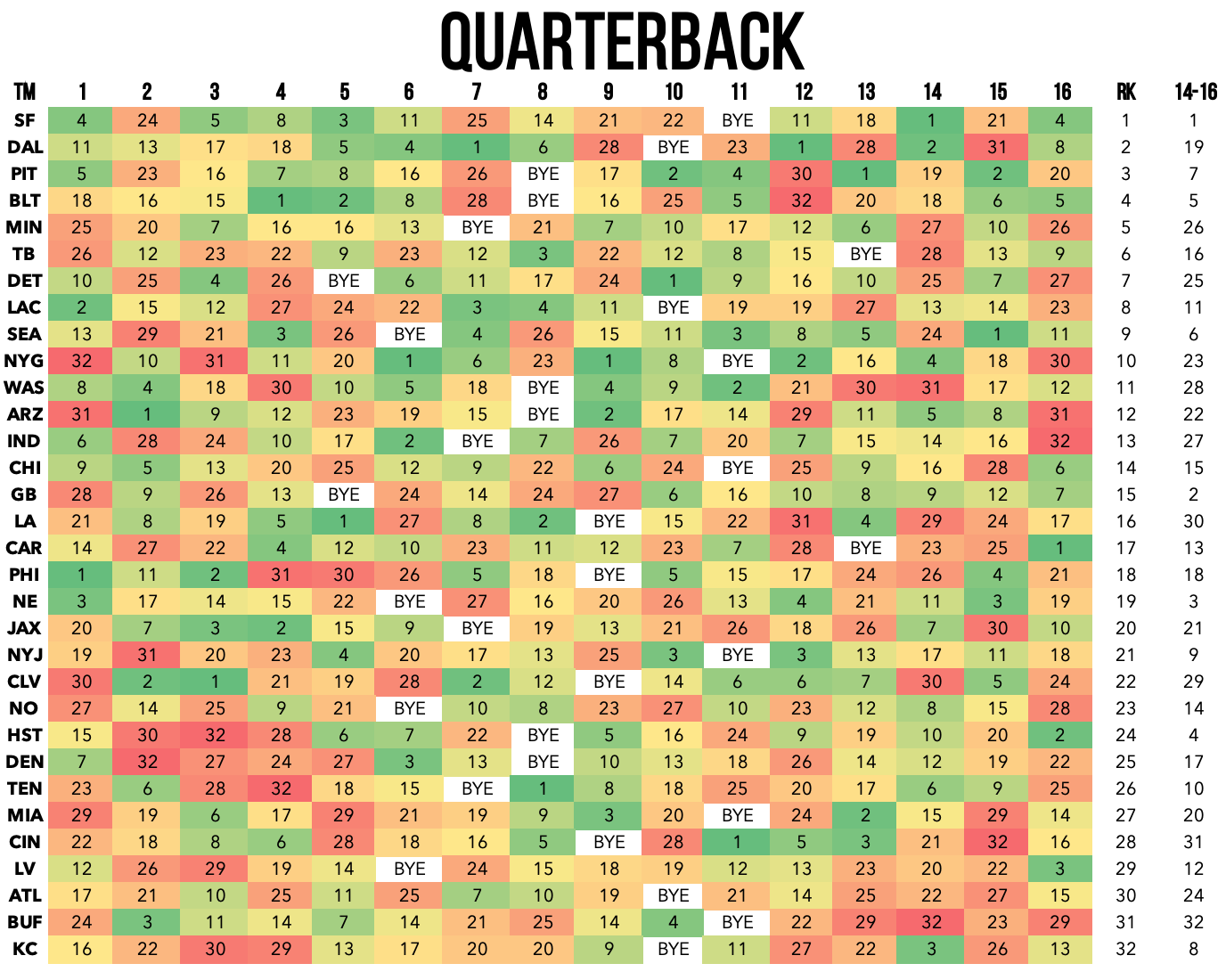 The fantasy hype has certainly died down from two seasons ago, and Garoppolo has settled into the back-end of the QB2s. However, his favorable schedule is very enticing if you’re a QB-streamer type. Garoppolo will benefit from getting to face the NFC East along with two contests against the Cards and one against Miami.

Not only does he have one of the best trios of wideouts in the league, but Prescott will also benefit from a favorable schedule in 2020. Facing the NFC East six times is a big part of his advantage. But the Cowboys will also square off against the Cardinals in Week 6 and Bengals in Week 14. Of course, it isn’t all good for Prescott. He gets an absolutely brutal matchup in the fantasy semifinal round against the 49ers in Week 15.

He’s back from injury and should benefit from a favorable schedule that features plus matchups against the NFC East and two contests against Cincinnati. One of those two showdowns comes in Week 15, so Roethlisberger could end up helping propel some teams to their fantasy championship games. That being said, we shouldn’t overvalue this schedule. Roethlisberger is still best viewed as a front-end QB2 option.

Not that he needs it, but Jackson gets a very appealing schedule in 2020. Like essentially everyone else at the top of the list, he’ll face the NFC East and will also have two matchups against the Bengals. Jackson’s schedule is especially favorable during the fantasy playoffs, with top-five matchups in each of the final two weeks (the Jags in Week 15 and Giants in Week 16). Despite the beautiful schedule, Jackson’s draft-day price tag will likely be too high to justify picking him. Taking Jackson in the second round is a major sacrifice of value when you consider the options you’ll be able to get much later in your drafts.

Continuing the theme from our running back strength of schedule and wide receiver strength of schedule, the Bills land one of the worst schedules for quarterbacks. Josh Allen has been a top-10 fantasy quarterback from the gate, but one has to be slightly concerned by a slate that features just three top-10 matchups. He also has a gauntlet to finish the season with the Chargers, 49ers, Steelers, Broncos and Patriots to close out the final five weeks of the season. While the schedule shouldn’t be the sole reason to shy away from Allen, it should give us pause to select him at his current ADP in the sixth round.

Sure, the schedule doesn’t look good on paper for Mahomes, but it really doesn’t matter. There’s arguably no player in the league less susceptible to matchups. Don’t overthink this one.

There isn’t much to like about the Falcons draw for Ryan, as they get just three top-10 matchups on the season. Like Allen, Ryan gets a rough stretch run with the Saints, Chargers and Bucs from Weeks 13-15. The good news is that he could end up in a bit of a shootout in Week 16 with the Chiefs on the schedule.

Jon Gruden and Mike Mayock certainly upgraded the Raiders’ receiving weapons this offseason with the addition of Henry Ruggs, Bryan Edwards and Lynn Bowden in the draft. However, Carr’s schedule won’t do him any favors. Vegas only has one top-10 matchup, and it doesn’t come until Week 16. Otherwise, Carr will see some rough matchups against the AFC East (the Pats and Bills in particular), the NFC South in the Saints and Bucs, and two matchups against the Chargers.